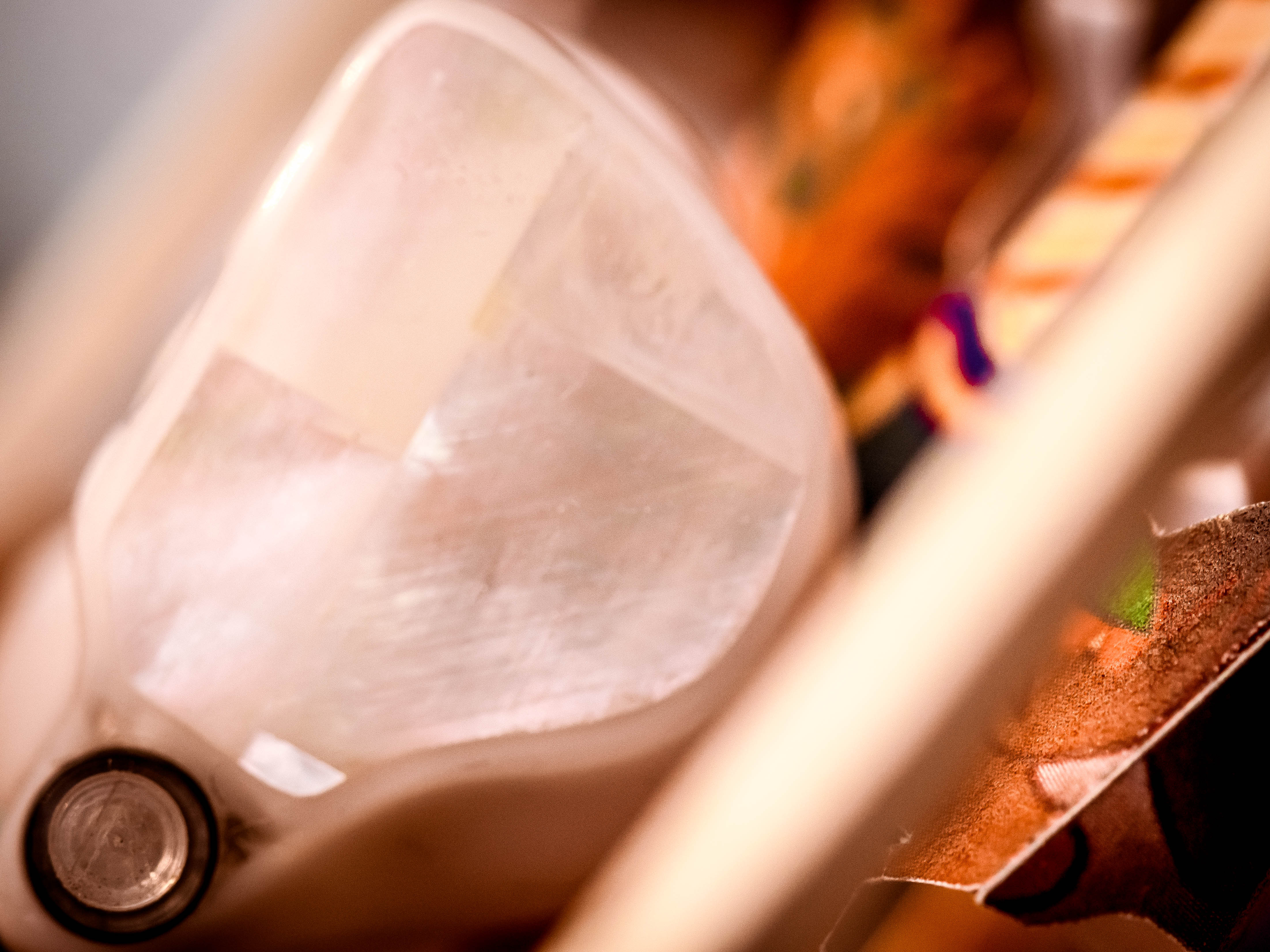 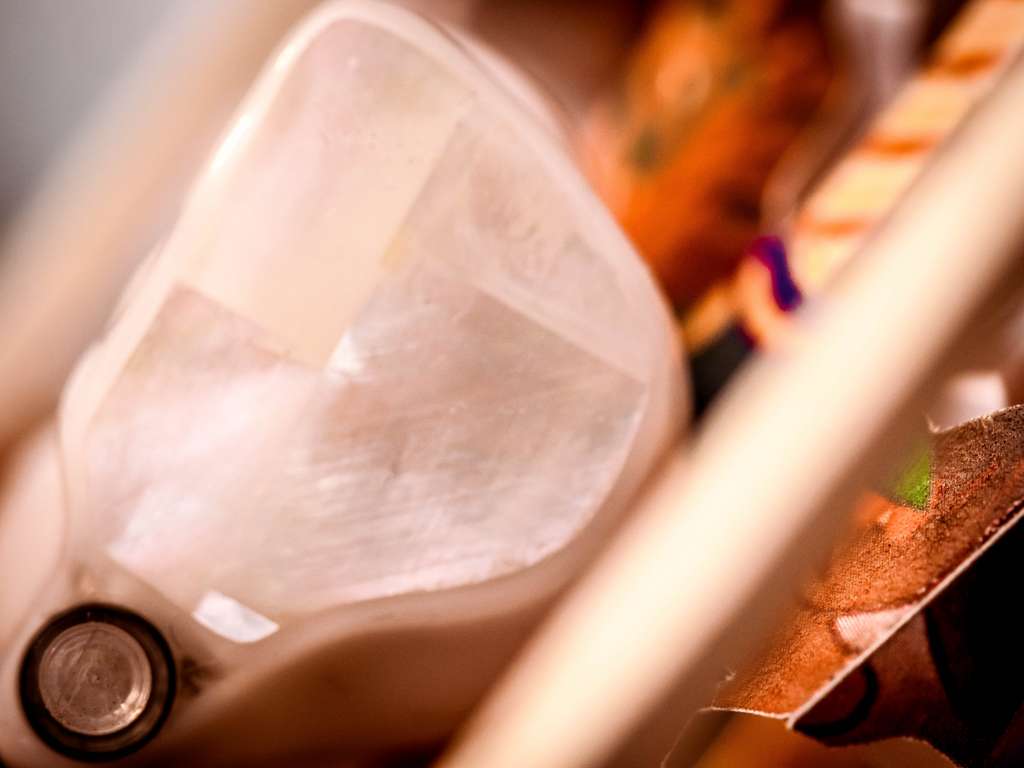 There is a scene in the movie American Beauty where the camera is held captive in front of a brick wall. For more than a minute, we sit behind the two protagonists, slowly and deliberately gathering our rosebuds while we may. It is one minute away from snowing, the movie tells us, and the invisible hand of lightning lingers in the air, puppeteering the surprisingly graceful dance of a plastic bag. The effect is electrifying- launching the viewer into a bout of sudden, uncontrollable reflection.

The 1964Ears Adel A12 has a similar kind of effect. It seizes you by your ears, delightfully coaxing you to rediscover the music that you’ve apparently taken for granted all these years. Singers and musicians seem to materialise around you, and your mind panics for a moment as it frantically tries to regain its balance. But then that moment passes, you start to calm down, and for the first time you stop listening and begin experiencing. With the curiosity of a newborn baby, you find the A12 has harry-pottered you to the studio, the club, or the stadium where your music was recorded. It is a staggering experience, sweet yet sour. Your music may sound the same with other IEMs, but somehow it will never feel the same.

If this is the future of IEM technology, then the future is bright as white, and I can’t wait to see what else the Adel technology can do. American Beauty indeed!

Fit: Good. Very comfortable, does not go so deep, more relaxed than tight.

Accessories: Mine was a kickstarter edition, and as of today I’ve only received a 1964 softcase and a stock cable. I appreciated that the case was a red/black colour combination, making it unique and thus easier to distinguish from all my other cases.[/box]

Straight from the Horse’s Mouth: An Interview with 1964Ears

How did you get started in audio?

My family and I are immigrants from the Ukraine. We came to the US in 1992- with 8 kids in tow. Anyway, my family came to the US with $5 in my dad’s pocket. We spent it on a Coke at the JFK airport and had no more money. My Dad’s brother helped out by taking us in- he already lived in the US, and had 3 kids of his own. So after adding us eight siblings, as you’d imagine, the household became really huge!

Our family continued growing, and my parents had four more kids which brings the total to 12!. My parents had no business background, as my dad was a factory worker and my mom was stay-at-home. I am the second-oldest, so, interestingly and fortunately enough, I’ve always had to work for everything I wanted in life. I had to learn the language, the culture and seized any opportunities I could.

From an early age (13-14) I had an extreme passion in music & electronics and tech. When young I even took my mom’s watches apart for fun. As I got older I started to learn about mixing, and began to make my own mixing boards. I would buy parts and put them together, to do what the big boys were doing. I’d say it was an interesting journey into in-ear monitoring. The first time i held a pair of customs I was instantly captivated by how an IEM was built, and wanted to know how it worked. So I cracked one open, and learned how BAs, dampers, sound tubes and so on affected sound. It was quite a journey.

In July 2010 I finally started 1964Ears, and tried to be as good as the other guys in the field. I had to work ten times harder than everyone else, since many of the others have had decades of experience and knowhow. Although, throughout the years I’ve made many good contacts in the industries, and am friends with many other CEOs. Today, 6 of my brothers work with me and a sister as well. Our other colleagues are also people we know, friends of people we know… It’s quite a family business. I have over 40 employees, and continue to love building close relationships with people. A huge part of my success is my wife’s support, who also happens to be one of the twelve kids from her family (it’s typical of Christian Ukraine people to have large families)!

Do you have a house sound?

Usually we try to push the envelope with new product releases, but sometimes it’s also market-led, where we see a need and try to fill it. But sound is subjective- there’s no right or wrong, and as the CTO, I have to give my stamp of approval, I have to like it, before it gets released. In general I like a warmer sound, which is more suitable for musicians. It brings out the character in the music, with rich tones. It has to be balanced, but not balanced in an uninviting way.

Can you describe your philosophy for how products should sound, and how you tune or voice them?

I normally start with an idea in my head before I start messing around. Actually I can more or less tell how something is going to sound before I even start tinkering! But then you gotta do your research, reference older stuff, to make sure we’re not going backwards with our work. In the past, we mostly went after the musician market because that’s where my passion is at, as a former sound engineer. 1964Ears was born out of that passion. But these days, we’re looking more at the audiophile market.

What do you see as different or unique about your flagship?

Let’s talk about the Adel tech. How did you and Stephen Ambrose meet? How did this technology get to interest you?

I was in Israel in the summer, and someone forwarded me a link to Asius’ website. I quickly understood the concept and was intrigued about how this makes the ear perceive sound differently. Everyone else had been focusing on the production of sound, and not the mechanics of the ear. I then decided that we had to have this technology in our products. And once I actually heard it, there was no going back. We’ve been working non-stop since then to get this tech in our products.

What are the plans for Adel going forward?

This specific audio application for the Adel tech has never been seen by anyone. In the past Stephen has introduced the Adel technology in hearing aid, ear protection products, and many other embodiments. But then he talked to major IEM companies, other audio companies, those guys weren’t interested. This technology is a bit threatening to the whole in-ear audio world, because it’s based on science and not hype. The removable, replaceable module design is co-collaborated only with Stephen. Its also nice that this technology is fully patented. This is like penicillin for the audio world- our goal is eventually for everyone to be able to use it. 1964 is exclusive licensor currently, but there are plans to release this to others in the industry.

So how does it sound?

We’ve had to retune our products because the Adel tech makes them sound different. We started with creating brand new products, and had to change the way we tune. It’s not night and day, but the stereo image is different. Open, dynamic, unrestricted. It’s a bit like listening to MP3 compared to DSD or FLAC. The Adel tech restores dynamic range, and makes things sound more natural.

Why the move towards more reference products?

It’s really about the demand. People nowadays want to use their CIEMs in the studio, for premixes, for portable music production. They want to have a tool that they can use. This just coincided with what we were looking at. We’ve had it in the works before, just to fill that niche in the market, but demand has really increased for this sound. Between our two new flagships, the A10 is the reference, and the A12 is the warmer version- the A12 is the bigger brother, closer to a stage sound. It’s just a little bit dark on top, to give it a richer sound signature. In general, concert speakers are different from studio speakers- the former are not tuned to be as reference; rather, they’re tuned to be more fun, vs more accurate. I’ve worked an equal amount in studio and in concert mixing. The studio monitors are crisp, high-resolution, whereas the concert monitors are juicier, bigger. This is what I was going for with the A10 and A12 pair.

How was the Kickstarter experience? Would you do it again?

It wasn’t a bad experience, and I’m obviously grateful for people believing in the technology, and new people coming on board. I would do it again, but I’d do some things differently- for example, I’d offer more products in the custom fit lineup, and have reviews lined up well in advance. Kickstarter takes a big toll on a company that already exists. It takes over the business for a while. As we started getting into the actual manufacturing and fulfilling the orders, it was a bit difficult to juggle that well, along with handling the Kickstarter bit. Communicating better, especially with the backers, will be a key for us in future. We think there will be room for improvement in future, and if we do it again, we’ll definitely put more prep in ahead of time.

Where do you see the industry headed?

Musician markets are growing fast- especially in the mid to lower end. Audiophiles tend to go for higher end. Both markets are really growing as an appreciation for high quality audio has improved.