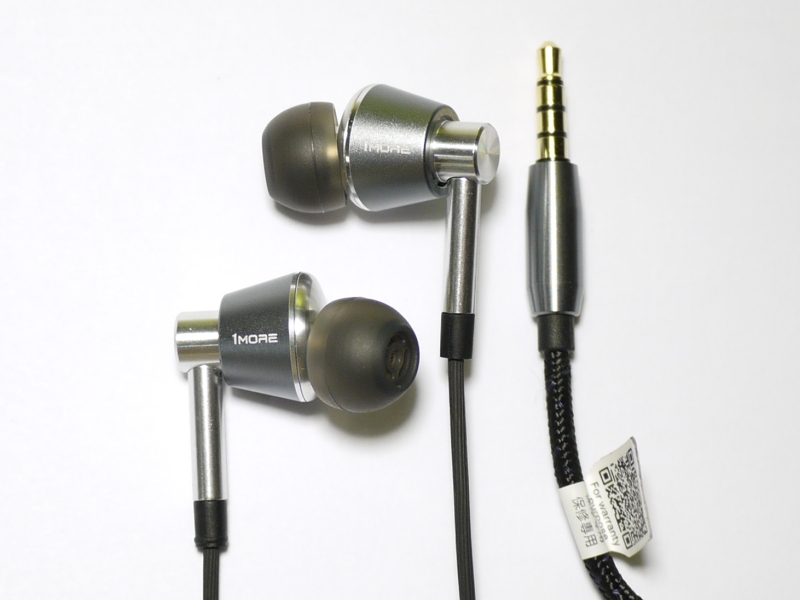 Brief: 1MORE’s first higher-end IEM is also the most affordable triple-driver earphone on the market

Accessories (4/5) – Single-flange silicone tips (3 sizes), shirt clip, airline adapter, and semi-rigid magnetic-clasp carrying case (note: newer version adds another 3 pairs of eartips)
Build Quality (4/5) – Similar to the recent Xiaomi Piston models – metal-and-plastic construction, earbud-style earpieces, and a cable that’s rubbery above the y-split and nylon-sheathed below it. The earpiece design is a little more elegant on the pricier 1MORE earphones but the cable and plug are mostly the same. The earphones also feature a 3-button remote that works with both Android and Apple iOS devices
Isolation (2.5/5) – Average due to the shallow fit of the earpieces
Microphonics (4/5) – Lower than with the Piston earphones; not bothersome when music is playing
Comfort (4.5/5) – Shallow-fitting earpieces, ergonomically angled nozzles, and strain reliefs that don’t create pressure points all result in excellent comfort

Sound (9/10) – 1MORE first got our attention as the iF Design Award-winning minds behind Xiaomi’s ultra-successful Piston earphone line. Now, the San Diego-based company is carving out a piece of the headphone market under its own brand with single-, dual-, and triple-driver models, all in a compact “half in-ear” form factor similar to Xiaomi’s latest releases.

The 1MORE Triple Driver is the flagship model and, to me, reads like a direct upgrade to one the better Xiaomi earphones, the Piston 3. The tuning of both of these earphones is a popular and versatile “mild v-shape”, but the 1MORE Triple makes the Piston 3 sound comparatively mid-recessed, muffled, narrow in soundstage, and lacking in both detail and refinement.

As with other “v-shaped” earphones, the 1MORE triples deliver some added bass punch, but nothing even close to basshead levels. Bass quality is superior to all of the Piston models including the latest Piston Hybrid, with less bass boom and more texture. In terms of bass quantity, the earphone ranks right between “punchy” but relatively balanced-sounding sets such as the DUNU Titan 1 and VSonic GR07 Bass Edition, and more consumer-friendly bass-heavy sets such as the RHA MA750.

The 1MORE Triple has a slightly warm tone, minimal midrange recession, and smooth, refined highs – a signature that’s both consumer- and audiophile-friendly. It makes the Xiaomi Piston earphones seem unrefined and light on detail in comparison. Even the Piston 3, the clearest and most balanced earphone in Xiaomi’s line, sounds mid-recessed a little muddy next to the 1MORE unit, which is clearer and more balanced despite its warmer tone.

Compared to higher-end sets, especially ones tuned for flatter/more neutral sound, clarity is merely ok – the 1MORE won’t keep up with something like an Etymotic HF5 or even the VSonic GR07, but for its price and sound signature it is a fantastic-sounding earphone – detailed, refined, relatively punchy, and warm-ish in tone. Even the soundstage presentation of the 1MORE is natural and convincing – it is spacious and dynamic, again making the Pistons sound narrow and congested in comparison.

Below are head-to-head comparisons between the 1MORE Triple Driver In-Ear Headphones and several sets that could be considered competitors, provided as additional context for the earphone’s performance.

Both of these earphones have broken pricing conventions for hybrid earphones – the Xiaomi with the first (mainstream) sub-$50 dual-driver hybrid, and the 1MORE with the first triple-driver hybrid under $100. There are many parallels between the two when it comes to fit, functionality, and even color scheme, but the pricier 1MORE unit boasts a more elegant design and significantly more refined sound.

The tuning of the 1MORE unit is more balanced, accurate, and neutral, with a “shallower” v-shape to its frequency response. It is much more refined and natural as a result, and boasts better clarity and resolution for a significantly more Hi-Fi audio experience.

The Xiaomi, on the other hand, is bassier, warmer, and darker. While it offers a little more impact, bass control (quality) lags way behind, appearing more intrusive and less detailed than the 1MORE Triple. The Xiaomi’s sound signature is overall more v-shaped and its midrange is less prominent. Vocals are less intelligible and clarity lags behind that of the pricier earphone by a margin. Overall, while the Xiaomi Hybrid can be a hair smoother, its only real advantages over the 1MORE are its low price and appeal to those who prefer a bassier sound to the more neutral tuning of the 1MORE.

The 1MORE Triple and HiFiMan RE-400 are two very different takes on mid-tier audiophile earphones – different to such an extent that getting used to either one of them all but guarantees that the other will sound “off” in a direct comparison.

The RE-400 is much more mid-centric when compared to the slightly v-shaped 1MORE Triple. Its bass is tighter and less impactful, and the overall sound is not as rich and full-bodied. It has more presence in the upper midrange, too, which together with the thinner sound means the 1MORE triple tends to sound more smooth and non-fatiguing.

The 1MORE Triple has quite a bit more bass impact and better bass depth, and the mids are more recessed compared to the RE-400. The overall tone is warmer and darker, and while the 1MORE is not the most spacious earphone in its class, it still has a more well-rounded and layered presentation compared to the RE-400.

The GR07 has been a reference point in the world of portable Hi-Fi going on five years now, and while the 1MORE Triple is relatively balanced-sounding as far as hybrid earphones go, compared to the GR07 its sound is noticeably more colored.

The 1MORE is a little bassier than the GR07, with a warmer tone and a smoother treble presentation. It yields to the VSonics slightly in overall clarity as a result of its bass being a bit more intrusive and the midrange being more subdued and recessed.

The GR07 is flatter overall, with less bass emphasis and mids that are more balanced and prominent. The presentation of the GR07 is wider and more “out of the head”. Altogether, this allows the GR07 to sound more lively and energetic. On the flipside, the GR07 is noticeably more prone to harshness and sibilance.

Overall, the 1MORE Triple Driver clearly has the more conventional and consumer-friendly tuning – it is smoother and carries more bass impact, but doesn’t quite have the balance or spaciousness of the GR07. For many listeners it will be the safer option, but it’s not going to replace the GR07 as my $100 “audiophile” reference.

The Titan 1 is another similarly-priced and very well-regarded audiophile earphone that offers a contrasting audio experience. Most notably, it is significantly brighter and has much more forward upper mids than the 1MORE Triple, resulting in vocals (especially female vocals) being way more upfront. As a result, the Titan 1 tends to sound clearer and more spacious, but is also less forgiving.

The 1MORE Triple is warmer and bassier, with a more “v-shaped” sound signature and more recessed mids. It doesn’t appear as clear or detailed as the Titan 1, but keeps up in detail and is arguably more natural in tone than the much brighter DUNU unit. The Titan 1 may well be more proficient technically – its bass quality is better, it is clearer, and it has a larger soundstage – but I find the tonal character of the Triple to be more natural and, more often than not, preferable.

The Fidelio S2 is similar to the 1MORE Triple in many ways, starting with the form factor – both are consumer-friendly, earbud-style IEMs with a part-plastic, part-metal construction. They are also very evenly matched in performance, albeit with different sound signatures. The Fidelio S2 is something of a compromise between the VSonic GR07 and HiFiMan RE-400, and stacks up to the 1MORE Triple in a way consistent with those two sets. It is flatter overall with more forward mids, a more neutral tone, and slightly better clarity and crispness thanks to the greater upper midrange presence and slightly brighter tone. The 1MORE is more v-shaped, has more bass emphasis, and boasts a warmer tone. The bass is a little less controlled and more intrusive, but the midrange and treble are still surprisingly clean and detailed, putting overall performance on-par with the Philips.

The MA750 is a bassier, more consumer-friendly earphone than the more audiophile-focused sets discussed above. Compared to the 1MORE Triple it is even warmer and more mid-recessed, and has more prominent and slightly less controlled bass. The 1MORE, while far from a reference set, is flatter and more balanced than the MA750. Its bass is slightly less powerful and impactful, and predictably tighter as well, which permits it better clarity and lets it surpass the MA750 in overall fidelity. 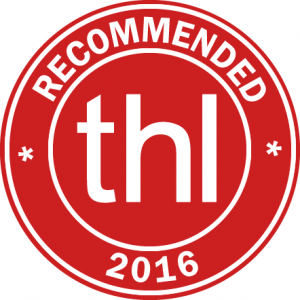 Value (9.5/10) – The new 1MORE flagship has an innately high value proposition with its triple-driver hybrid internals – a configuration that, while not new or unique, is usually found in much pricier earphones. I was worried that it would go underutilized and amount to a marketing gimmick, but that isn’t the case – the tuning does take advantage of the higher-end driver, and while the sound signature is a compromise between “audiophile” and “consumer”, the performance would still be more than acceptable at two or three times the price. The consumer-friendly tuning is also not a bad thing in itself, and it makes the 1MORE a direct, natural upgrade to some very popular budget earphones including the Xiaomi Piston 3, and an easy recommendation for many listeners.