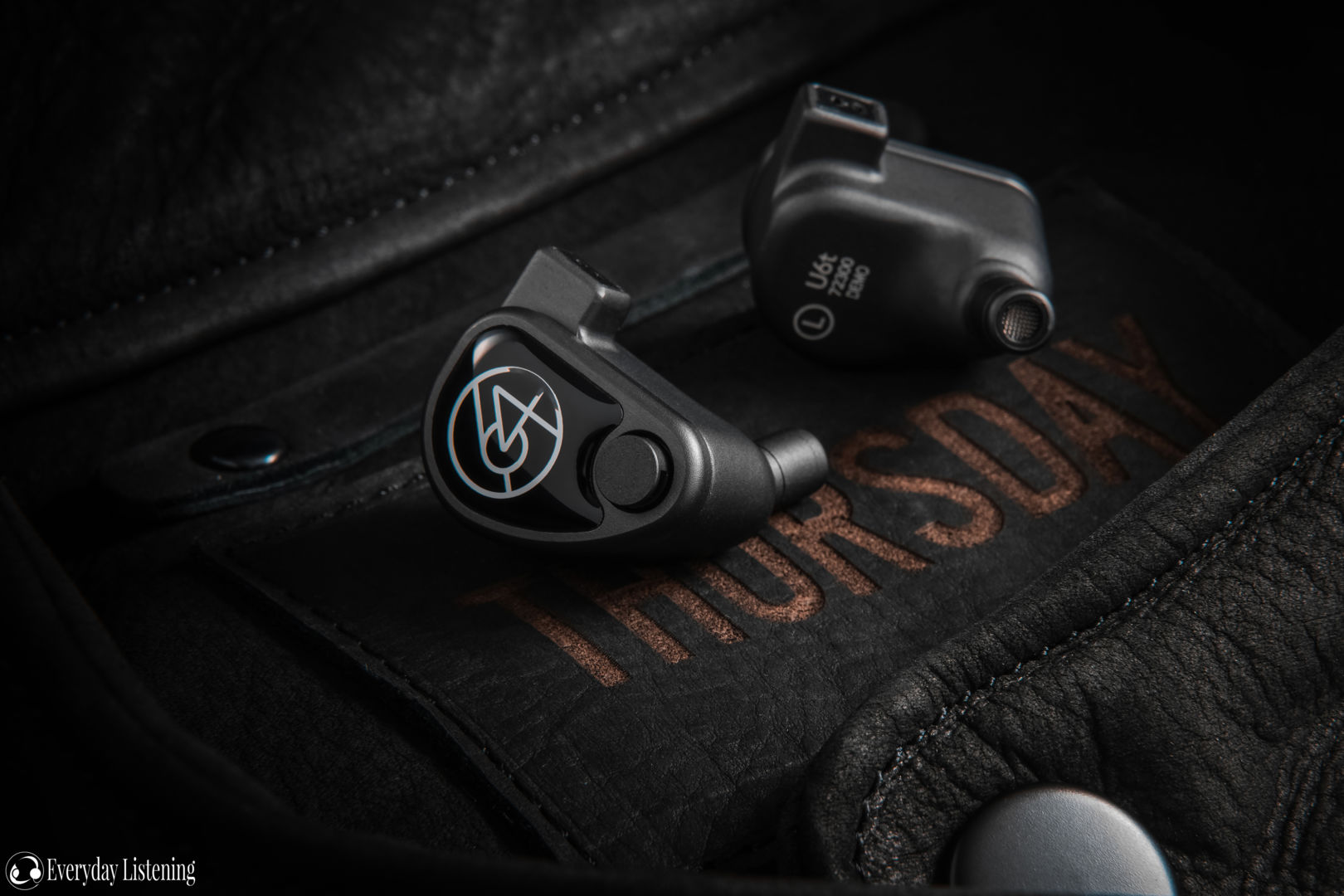 64Audio U6 ($899): The U6 provides a similar focus on delivering a smooth and coherent tonality but has a more laid-back presentation more suited towards easy listening. The bass exemplifies this, being more mid-bass focused on the U6 and sub-bass focused on the U6t. Both have similar emphasis in context of their midrange, the U6t extends noticeably better having a more palpable slam and rumble. The U6 focuses more on mid-bass punch, it isn’t as dynamic but still has a pleasant full and warm low-end if some bloat at times. The midrange follows a similar trend. The U6 is warm, laid-back and relatively coherent but mostly because it has a dip in the upper-midrange. In turn, the U6 has noticeably more laid-back vocals and the voicing is a little off due to the 3k dip and large 4k peak above. The U6t sounds more balanced and has a more accurate timbre. It has much better separation and higher resolution throughout.

The U6 sounds slightly higher contrast due to its upper-mid tuning and has a more obviously warm tone that some may enjoy. The U6t has slightly more treble presence, but the U6 has a similarly crisp tuning with a small 6k peak and some emphasis around 8k for headroom. The U6t is clearly more detailed here, the tia driver providing a far more nuanced presentation and superior extension too. The U6 is crisp and focused but showing its age. The U6 has an intriguing soundstage performance. It has similar depth to the U6t but far more width. It also has a diffuse centre image, tending to push wide, it’s laid-back presentation exacerbating its size. The U6t has much more precise imaging and sounds more organized and accurate altogether if more intimate. This comparison shows just how far the company have come and the beauty of bringing their TOTL tech down to their more affordable models.

Fir Audio VxV ($999): A 5-driver hybrid with Fir’s tubeless driver tech and atom pressure relief, a similar kit to the U6t overall. The VxV has a slightly mid-forward tuning that contrasts to the U-shaped U6t. However, its bass tuning is quite full so it never comes across as lean. The U6t has more bass and greater sub-bass emphasis giving it more power and slam. The VxV is no slouch, it extends a little better and has a slightly more textured bass by virtue of its hybrid design. It has a fuller, punchier tuning and similar slam due to its driver type, despite having less emphasis. The U6t sounds slightly more controlled and has higher note definition in return. Its tuning is slightly cleaner in the mid-bass but it sounds less balanced overall than the VxV. The midrange is more forward on the Fir and assumes a more neutral and revealing character. The VxV has greater clarity and is slightly more articulate.

The U6t is more full-bodied and robust, it sounds more coherent and slightly more natural in terms of voicing. The VxV can sound a little dry at times, the U6t is fairly versatile and consistent between tracks. The VxV has a slight leg up when it comes to resolution and note definition in the midrange. Both have similar treble presence, the U6t has a more focused lower-treble, the VxV has a small 6k bump followed by a larger, more energetic upper-harmonic lift giving it a tizzier, thinner voicing in turn. The U6t has more accurate note body and resolves more texture while the VxV brings fine details more to the fore at the cost of thinness. The VxV is airier and has a bit more sparkle, the U6t is cleaner and more contrasted with a darker background. The VxV has a noticeably wider stage and better separation. It sounds more holographic while the U6t is more stable and layered with higher coherence.

Campfire Audio Andromeda 2020 ($1099): While the Ara is more similarly priced, I thought its leaner tuning wouldn’t appeal to the same consumers. The warmer Andro is a more fitting comparison and a staple for many around this price range. Like the U6, the Andromeda provides an emphasized bass but with more focus around the mid and, to an extent, upper-bass. It has a tight, affirmative impact but the U6t does extend noticeably better, delivering more slam, pressure and rumble. The U6t is slightly bassier overall and also a lot more dynamic and textured. The Andromeda is faster decaying, warmer and fuller. It is slightly more articulate and provides more defined notes despite its tuning. The Andromeda provides slightly more vocal presence than the U6t but both can be considered on the laid-back side here. In terms of voicing, the Andro is lower-contrast, having more room in the lower-midrange and a warmer, fuller midrange presentation.

The Andro is more articulate to counterbalance but overall has less separation. The U6t is slightly cleaner tonally and has better separation, making it slightly more revealing. Both have lower treble emphasis, the U6t at 5k with the Andro coming across as brighter due to its dual 6k and 8-10k emphasis. The U6t has a cleaner transient response, it has more note body, texture and slightly better fine detail retrieval, sounding more nuanced overall. The Andro is crisper but thinner and not quite as micro-detailed, but it also an airier presentation with more sparkle, so what detail it retrieves is more apparent. The Andromeda has a slightly more spacious stage despite being a sealed IEM. It has more holographic imaging and slightly better layering than the U6t. The 64 Audio IEM has better separation and slightly more accurate localization.

Lime Ears Aether R (1100EUR): The Aether R has a similar overall approach to tuning as the U6t but is less laid-back in the midrange and has a warmer mid over sub-bass emphasis. It has a bass boost switch, sounding more similar to the U6t with it on, which I thought would make for more fair comparison. The Aether R has good extension, just a little less than the U6t and it has less sub-bass emphasis, the U6t has noticeably more note weight and slam in turn. The Aether R is punchier, slightly more controlled and faster in both attack and decay. While it provides a less textured and dynamic image, it is slightly more articulate. The midrange is more forward on the Aether R, even with bass boost on. The U6t is slightly more articulate and slightly more extended with a cleaner tonality on top. The Aether R is medium warm but less so with bass boost off.

It has a larger dip for density in the upper-midrange that makes it sounds slightly smoother but also a little truncated. Accordingly, the U6t delivers a slightly more natural voicing to my ears. The Aether R matches the U6t on resolution here but has slightly less definition with a little fuzz creeping in from its warmth. Above, both are also relatively similar in tuning with 5k peaks of similar amplitude. The Aether R has a slightly softer transient response, its treble sounds a touch more organic and well-bodied albeit sligthy less resolving of fine detail. The U6t delivers that fine detail in spades, its note presentation has a harder edge and its presentation is slightly more vibrant due to its greater upper-treble presence. The U6t has a bit more extension and generally better treble resolution. The Aether R has a slightly larger stage, depth especially. It isn’t quite as layered that said.

Custom Art Fibae 7 (1200 EUR): The Fibae 7 has a similar tuning and feature set to the U6t but chiefly, a smoother treble response and less bass emphasis. Both have a sub-bass focus, the Fibae 7 sustains more into the mid-bass giving it a warmer voicing. The U6t extends better and delivers more slam and rumble, the Fibae 7 also has a well-weighted tuning but doesn’t have the same rumble and power. It has a bit more punch in the mid-bass and a slightly slower decay that gives it a small textural advantage. I find the U6t to offer the more dynamic and concise note presentation, but the Fibae 7 is a good alternative if you prefer more warmth and balance in the tuning. The midrange is more forward on the Fibae 7, sitting in better balance with its bass. The voicing is similar too, the Fibae 7 is slightly brighter with more upper-midrange emphasis but it has a little more warmth to counterbalance. The U6t is more full-bodied and sounds more coherent.

The Fibae 7 has a smoother articulation, which explains why its upper-midrange has been brought forward, retaining sound openness and clarity. In turn, it lacks any fatiguing properties but can sound a little strained at times. The U6t is slightly more articulate and has a slightly more natural voicing to my ears though it is more laid-back as well. The U6t has a slightly brighter top-end, the Fibae 7 is generally smoother and more laid-back here but has a small 6k bump for clarity. The Fibae 7 has more note body but less bite to its note attack. The U6t discerns fine details better at the cost of note body, the Fibae 7 being better for those averse to treble any form of brightness still wanting a detailed sound. The Fibae 7 has an airier middle-treble while the U6t has a bit more upper-treble presence and extension. The Fibae 7 has a wider stage, the U6t has sharper imaging.

It was very nostalgic for me to revisit the original U6 as I haven’t given that model a listen for some time. Comparing it to the new U6t is a wonderful reminder that hope is not lost in the audio community! The U6t is the people’s champion in 64 Audio’s line-up. It represents the commoditization of industry leading BA technology in a design that is attainable for enthusiasts with a tuning desirable for the majority; paying tribute to one of their most highly regarded high-end monitors. It is also an evolution of 64 Audio’s universal IEM approach, with new metal shells inspiring great confidence and a very welcome cable upgrade on top. This comes in addition to their apex tech and a flat impedance design that add value, versatility and convenience.

It goes without saying that the U6t is still not a cheap or affordable IEM by any stretch, nor does it compete eye to eye with flagships despite touting a similar tia tweeter. It also won’t suit those desiring maximum linearity nor the largest soundstage. It does perform spectacularly in-class, and showcases a superbly executed and versatile U-shaped tuning. If you enjoy a gorgeous, organic midrange and don’t mind a slightly laid-back presentation, the U6t will be tough to beat. It offers an immensely impressive bass performance all the while, especially considering the driver type, and the high-end benefits from a pristinely clean note delivery that you can’t find replicated elsewhere. If you have the budget, the U6t is an auditory delight and a fully formed high-end IEM experience.

The U6t can be purchased from 64 Audio for $1299 USD at the time of review. I am not affiliated with 64 Audio and receive no earnings from purchases through this link.