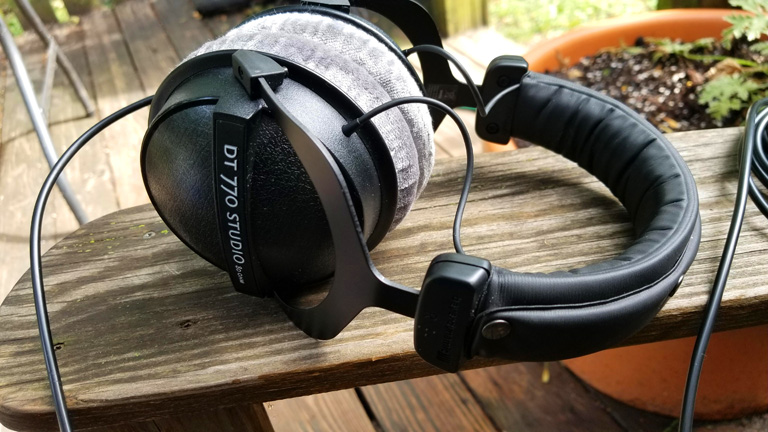 Writing about the Beyedynamic DT770 Studio will be kind of strange for me. It’s neutral, in every conceivable way. What more do you say? This is literally the exact sound signature I would describe to Beyer if they were designing a custom studio monitor for me. It is not fun, or bright, or bassy, or anemic. It is neutral. The 770S conveys an unflattering, accurate representation of the music. Instead of pleasure, the 770 seeks truth. Yet they do it in a way that is non-fatiguing or brutal.

In fact, contrary to its intent, the 770S has been a pleasurable listen. The treble is detailed and precise, with moderate twinkle. Energetic, but not super aggressive. It has great purity, and even greater extension. A modest peak in the lower treble provides resolution and articulation, and a raised section in the upper treble gives the stage air and cleanliness. Despite this, the highs possess a linear, coherent nature that sounds very nice to my ears. 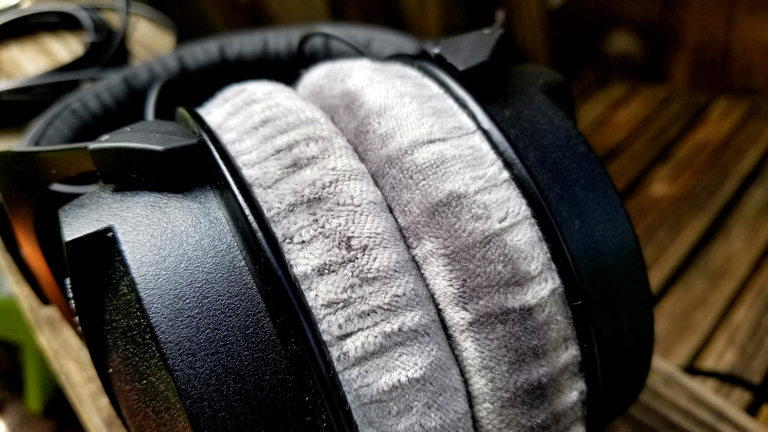 Beyer’s upper registers have good body and weight. They aren’t overly thick or warm, but there is what I call a taste of honey; a sweetness which banishes sterility and coldness. However, the highs remain unflinchingly analytical. Just delightfully so. They never stray into lush or smooth territory. No, they’re here to reveal.

Vocals sit perfectly neutral on the stage, neither forward nor recessed. They have medium size and average note weight. Outstanding details flesh out the artist, with lots of texture and dynamism. Listening to Godsmack’s new album, Sully Erna’s vocals are rich and powerful, portraying grit and wholesome timbre. You can hear all the compression artifacts of the awful mastering, yet the DT770S doesn’t shove them in your face. I can still enjoy the album. Melissa Menago, from her LITTLE CRIMES album, is warm and lush, sweet and emotional. Again, these headphones add no color, but simply deliver exactly what’s recorded. And they do it SO well.

Mid-range instruments like electric guitars carry such delicious authority, with significant crunch and tornadic energy. They are flat-out satisfying. No other way to say it. The accuracy of the tone cannot be overstated. It all sounds so very, very right. Detailing is outstanding for the price, thanks in part to quick notes and brilliant clarity. Blemishes are heard with ease, while a good mix just shines. Background and venue noises come through enough to identify and fix if need be. Are these the best at that? No. But for the price, they perform remarkably well. 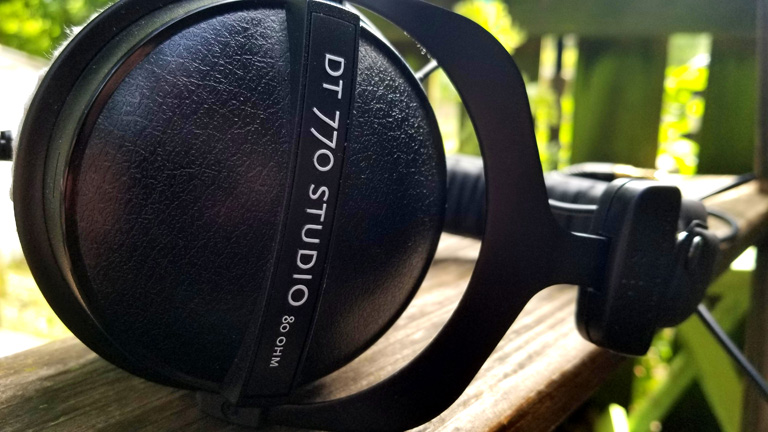 Neutral bass is a bad thing, right? Shit, I need to rethink that. The DT770S showcases enormous power and attack in the low-end, without ever stepping out of place. It is neutral… I swear it is. But goddamn, it is succulent. Lower, mid, and upper bass, it’s all present in more or less equal measure. I’d be hard-pressed to say which region is elevated, if any. It sounds rather level. You get the deep, dark rumbles of Black Sabbath’s BLACK SABBATH, along with the violent mid-bass punch required of hard rock. All without bleeding an ounce into the vocals.

It’s not my favorite bass-cans, yet I cannot deny digging the hell out of it. The texture and speed, the extension, it culminates in a glorious explosion of low-end bliss. It gets your head bobbing, as they say.

As might well be expected for closed-back studio monitors, the Beyer does not produce the grandest of stages. It’s intimate, with equal dimensions on all axes. Though, I shouldn’t call it claustrophobic. The elements therein are well-spaced, in spite of their adequate size. Imaging is tremendous. Sooooo accurate! Separation is good, as is resolution, but it not’s not dethroning any Top of the Line cans. The 770S is a strong technical performer. At the price, it’s killer.

Throwing on my trusty Massdrop + Sennheiser HD6XX ($199) I’m surprised to discover I don’t need to change the volume at all. From the NFB-28 (single-ended output) the Beyer is just as stoat a driver as the Senn. Immediately, I notice a profound softness and warmth to the audio. Due to the open-back nature of these headphones, the music has room to breathe and escape. It’s not trapped inside the cups, pounding against your ear. This lends itself to an easier, laidback presentation, which the HD6XX capitalized on with its tuning. Treble is warmer, and in fact rolled off to some degree. The Beyer is brighter and more detailed up top. Sennheiser emphasizes mid-bass, and has very little lower bass. This creates a fuller, warmer timbre. The 770S, however, has the quicker lows, with more texture, and a superior, visceral attack. On the HD6XX, drums don’t hit nearly so hard. Vocals are also very different. The HD6XX is velvety, forward, and oh so rich. Whereas the 770S is detailed, sharp, and highly resolved. Beyer is altogether clearer and the better studio headphone. Yet Sennhesier dominates in musicality.

Now the Meze 99 Classics ($309, Review HERE) are far more efficient than either of those other two. They are built for mobile use, but function splendidly as monitoring cans. They are my go-to when critically listening for changes between DAPs. Compared to the DT770S, right off the bat, Meze is smoother, and more euphonic. That bass fills the room in such a realistic way. Beyer’s lows are tighter, faster, and better textured. Yet Meze is honest of timbre, and all around richer. Treble extension goes to the 770. There seems to be more air and headroom. Also, resolution is a touch sharper, which is aided by extension. Meze is not far off, though. Vocals are more detailed, clinical, and to the point on Beyerdynamic’s monitor. Better articulation, too. While Meze is silky and more magical. There’s some lovely bass-bleed which adds deep, wholesome tonality. Like Sennheiser, the 99 Classics possess greater musicality, at the expense of straight, by the numbers performance. As much as I’m impressed by Beyer’s offering, the Meze 99 Classics remain one of my absolute favorite things to listen to.