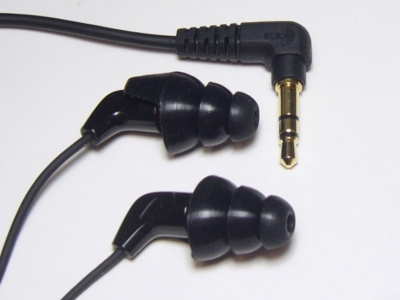 Accessories (3.5/5) – Single-flange (3 sizes) and triple-flange (2 sizes) silicone tips; hard clamshell carrying case
Build Quality (4.5/5) – The minimalistic design combines tiny, nondescript-looking plastic housings with a Kevlar-reinforced cable. The color-coded nozzles are surprisingly wide for an armature-based set and the cable lacks strain relief on housing entry. It also has plenty of long-term memory character despite being relatively tangle-resistant
Isolation (4/5) – Tiny, sealed housings allow for very high passive isolation, especially with the triple-flange eartips
Microphonics (4/5) – Present when worn cable-down; low when worn over-the-ear
Comfort (5/5) – The T15 is one of the smallest IEMs on the market and is remarkably unobtrusive. The only odd design choice is the wide nozzle, which makes the fit slightly less universal than – say – an old Etymotic ER6i. For all but those with the smallest ear canals, however, the T15 will be a fit-and-forget earphone with the right tips

Sound (9/10) – Designed in cooperation with Netherlands-based Dynamic Ear Company, who are also involved with ACS’s latest music filters, the tiny single-armature T15 monitors produce a very clear and detailed sound over a wide frequency range. They are by no means bass-heavy but the low end has surprisingly good depth and is fuller than that of Etymotic’s flagship ER-4S, though not by a wide margin. The ER-4S, with its shorter attack and decay times, sounds drier and more clinical than the T15 does. The bass of the T15 is still very clean and articulate, however, as expected from a single-armature reference earphone. It is flat in response and possesses enough detail and texture to keep up with the likes of the Audio-Technica CK10 and HiFiMan RE272, as well as to easily beat the cheaper Fischer Audio SBA-03 save for the slightly lower overall bass quantity.

In the midrange, the T15 is neutral and very accurate. Overall balance is excellent and the midrange aggression of cheaper monitors such as the SBA-03 is nowhere to be found. The T15 is undoubtedly a BA-based earphone, crisp and highly detailed – traits that are very obvious in comparison to the softer, more relaxed HiFiMan RE272. However, it is also refined and smooth, not unlike the Audio-Technica CK10. Transparency yields to the CK10 and Ety ER-4S slightly but again the T15 has a marginally fuller, more fleshed-out sound. Still, its sound will not be confused with that of a dynamic-driver earphone any time soon. Compared to the JVC HA-FXT90, for example, the T15 offers far less bass, less natural timbre, and a dryer, less musical sound but makes sizable gains in clarity and resolution.

The highly neutral tone of the T15 does help with overall realism – both the ATH-CK10 and Etymotic ER-4S sound a touch colder and brighter on the whole. The CK10 especially offers more treble sparkle at the expense of the flatter, less fatiguing treble response of the T15. Top-end extension is similar between the three despite the CK10 being a dual-armature earphone. Where the Audio-Technicas do pull away is imaging – while the ER-4S and RE272 both offer a slightly wider soundstage with similarly good layering to the T15, the CK10 is significantly more three-dimensional, with a larger soundstage and headstage and more precise positioning. Compared to the rest of my armature-based earphones, the T15 easily holds its own – the stage is wider and more realistic than that of the SBA-03 and more spherical than that of the ER-4S. It is still very much a monitor, however – maybe not as revealing and unforgiving as an Ety, but not far behind. Simply put, the T15 is for fans of balanced, analytical sound who want a slightly more even-footed response curve to the traditional high-end Etymotic earphone.

Value (8.5/10) – The ACS T15 is an extremely capable universal monitor in a remarkably tiny package. The plain plastic earphones may not look or feel particularly high-end but the comfort, isolation, and sound quality make the T15 one of the best choices in its price bracket both for professional use and for consumers who value clarity, accuracy, and balance over emphasized bass and flashy cosmetics. Ety lovers especially should take note of the T15.