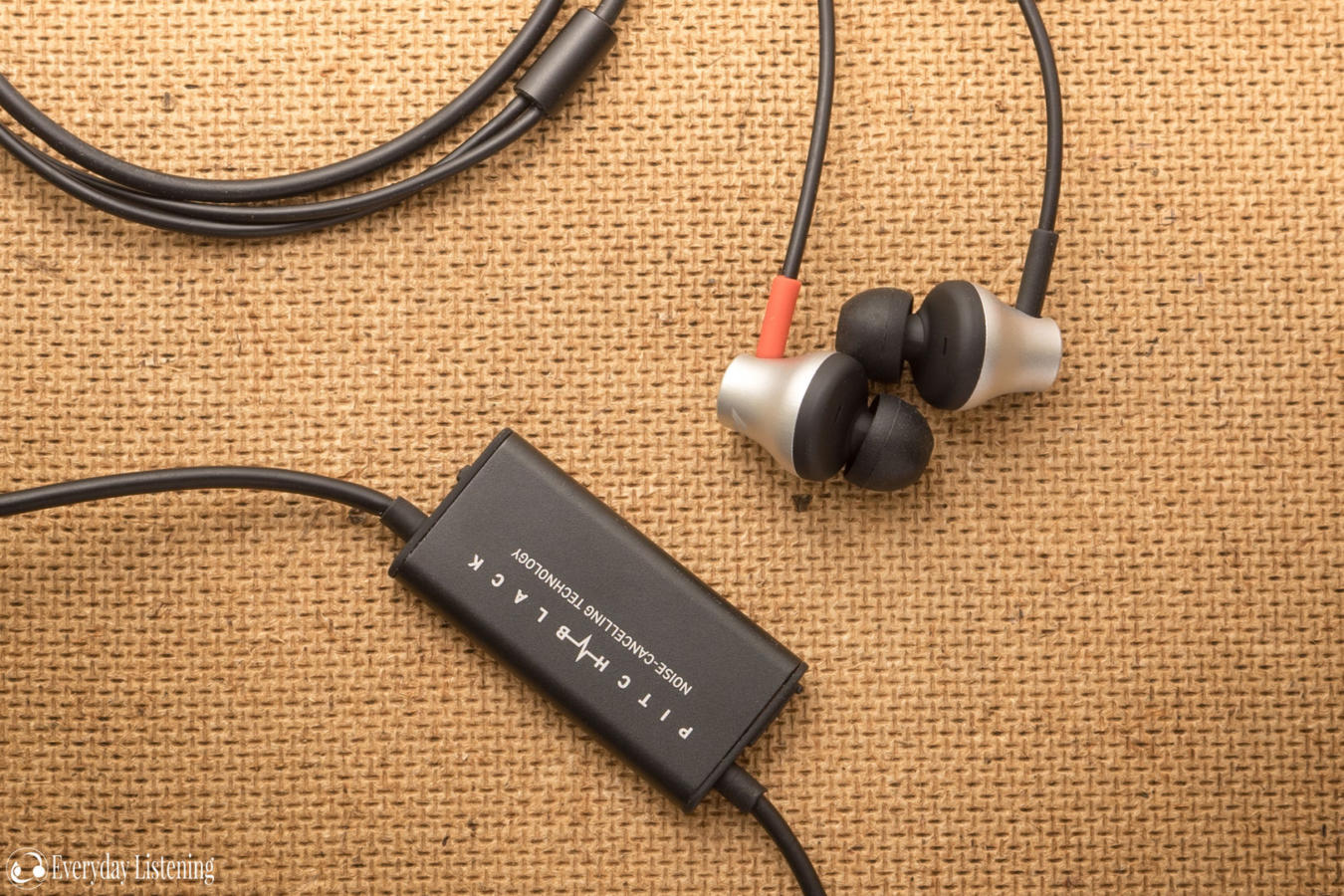 Alongside the 1More DD ANC that I recently reviewed, my 9hr flight from Sydney to Japan also served as the perfect test environment for the 747’s noise cancelling performance. If you aren’t familiar with active noise cancelling technology, the earphones use microphones and lightning fast calculations to analyse incoming noise and produce an inverse waveform that cancels out that ambient sound through destructive interference. These solutions mainly target lower-frequency noise such as the drone of engines or the whirring of air-conditioning, making them a top choice for frequent travellers. Again, I don’t find the 747’s to block as much noise as my trusty Bose QC20’s but they did do a fine job cancelling noise during my flight, matching the more expensive headset in many regards.

In addition, though activating ANC does slightly alter the sound, with the module doubling as an amplifier, this doesn’t increase noise nor does it introduce any artificial DSP into the mix. Instead, the 747 gets a few dB louder and sounds a little more vibrant with slightly enhanced clarity when compared to my phone’s stock output (ANC disabled). It also means they sound very consistent between sources though the internal AMP can be stacked with a more powerful DAP to produce louder volumes. As for the ANC itself, they don’t cover an especially wide frequency range like the 1More and Bose in-ears, but they do claim to block more noise overall; 25dB as opposed to 20dB. In addition, the 747’s passively block the most noise without ANC enabled, so they do block a lot of noise overall despite their slightly less comprehensive active component.

OVC H15: The H15 is a terrific budget noise canceller but it does have the least aggressive noise cancelling solution in comparison to the following models. Passive isolation with ANC disabled is also just modest, higher than the 1More’s but not they aren’t nearly as isolating as the ADV 747’s and higher-frequencies such as voices and the hissing of air conditioning are less attenuated as a result. With noise cancellation enabled, they still attenuate the least noise in this comparison but they are the cheapest and aren’t affected by wind noise at all.

The H15 produced no audio glitches with ANC enabled even over months of testing. Moreover, they lack the sense of pressure usually exerted by ANC in-ears. Their main downfall stems from their sound, their ANC ability is affected by their inbuilt bass boost which noticeably reduces noise cancelling performance when enabled. However, they do sound somewhat bass-deficient without it, not ideal when listening for hours in a noisier environment.

1More ANC: 1More offers the most advanced, aggressive noise cancelling solution save for the Bose QC20. With ANC off, they block very little noise so the electronics have to compensate to silence ambient noise. Luckily, 1More’s implementation is excellent, and the Dual Driver’s easily block the most low-frequency noise; drones and hums that remain clearly audible on the other in-ears are essentially silenced on the 1More’s. Their noise-cancelling also covers the widest spectrum of sound but, due to deficient passive isolation, they still don’t lower higher frequencies hissing particularly well. That said, voices are well attenuated, more so than the 747 and H15 if slightly less so than the Bose. The 747’s do lower hissing and the rush of air-conditioning more though it ultimately comes down to preference as the 1More’s hold an equally strong advantage with regards to lower and midrange frequencies.

And, as they possess the most aggressive noise cancelling, they are also the most susceptible to audio glitches. For instance, wind noise is the most amplified and they produce frequent pops during changes in cabin pressure or closing bus/train doors. On the flipside, at least the 1More’s don’t create much pressure during wear. And despite these artefacts, my main gripe with the 1More is that they produce a reasonably noticeable hiss when ANC is enabled and often boost high-frequency noise rather than cancelling it out, something I haven’t experienced with any of the other in-ears. Luckily, 1More is able to update the firmware on the Dual Driver ANC, they’re a great performer as is but I’m hoping these issues will be improved or fixed in future.

ADV 747: The 747 offers the most passive isolation with ANC disabled and therefore blocks the most high-frequency noise. Its ANC implementation is also very well-judged with similar if not slightly greater potency than the H15, and the 747 offers the most noise attenuation of the bunch throughout the whole audio spectrum. With ANC enabled, hissing and higher voices are reduced in amplitude and low-frequency drones are drastically attenuated. They hold a notable advantage over the H15 in high and midrange-frequency attenuation but their ability to drown out low-frequency droning is only slightly greater. In use, the 747 produces a small sense of pressure that is noticeable but not irksome, however, when outside, wind noise is slightly amplified.

They also didn’t produce any glitches due to changing cabin pressure or slamming doors on public transport as the 1More and Bose in-ears tended to. For my personal tastes, the 747 provided the most desirable noise attenuating performance combining great ANC with good passive high-frequency isolation. Of note, the 747 can also be equipped with more isolating foam ear tips. With foams, they’re almost comparable to the Bose QC20 and even block more sound in some frequency ranges. This is specific to the 747 as the OVC, Bose and 1More earphones all use unique nozzle shapes and designs that don’t permit third-party tips; the 747 can fit any tip most to your liking.

The 747 pursues an L-shaped tone with large bass emphasis, somewhat recessed mids and smooth highs that avoid fatigue during longer listening. Their low-end is mostly mid-bass focussed but elevated upper-bass produces a notably thick, warm midrange. Highs are laid-back and reserved in presence, with slight crispness preceding roll-off and truncation. They aren’t as balanced as the 1More Dual Driver ANC, they aren’t even as balanced as the Bose QC20. That said, their thick, bassy sound excels when ambient noise starts to creep up in volume, retaining a rich low-end in even the loudest environment.

Utilising enormous 13mm dynamic drivers, the 747 carries bass-head levels of emphasis making it a creature of warmth and impact over articulation and finesse. Sub-bass is well extended with physical slam and surprisingly controlled rumble considering their level of emphasis. Mid-bass holds the greatest weighting in the entire sound creating a very warm, thick low-end with great impact. This precedes a small dip into the upper-bass though these frequencies remain heightened over neutral and the lower midrange, producing some spill and noticeable colouration.

Through this style of tuning, bloat is clearly apparent and the 747 doesn’t have the tightest bass response, but they aren’t overly flabby and do present with awesome richness in all environments whether quiet or loud. They also aren’t especially defined, bass presents more through tones than textured notes and they are easily overwhelmed during faster tracks. Bass does clearly lack some nuance and separation but this is still a tonally pleasing response that many will love and enjoy. It’s also a sound that works exceptionally well for the earphone’s intended uses even if they can be overly bass heavy in quieter environments.

As a result of their bass emphasis, the 747’s midrange is comparatively recessed with a warm, thick presentation. The 747’s aren’t especially balanced but remain mostly linear through the midrange frequencies. Their thickness is also offset by enhanced clarity on account of a slightly brighter tonal tilt and a lower treble lift. Through this, vocals sound chesty and instruments organic, but all are enhanced by a little extra air and separation that prevent outright veil and congestion. They still aren’t particularly transparent or revealing on account of their thickness though, due to their mostly linear tuning, the 747’s midrange is quite naturally voiced with no wonkiness to vocals.

Through this, male vocals do sound thick and a little dry, lacking some definition, and instruments such as guitar tend to have excess bloom, diminishing separation. That said, though similarly full-bodied and warm, female vocals are presented with greater clarity and extension, producing a very agreeable listen. This is topped off with improved if not outstanding upper midrange layering and an exceptional smoothness throughout imbued by their laid-back, linear tuning. Though they do skip over a lot of details, the 747’s midrange is warm, pleasant and inoffensive with no glaring faults and some interesting qualities enhancing listenability.

Treble is notably laid-back with just a very slight lower treble bump serving to enhance detail presentation much like the 1More DD ANC. That said, the 747 doesn’t extend as linearly as the 1More, lacking the same air, separation and resolution. As a result, though instruments such as guitars and cymbals sound relatively clean, the clash and subsequent shimmer sound dampened and truncated. Moreover, elements sitting around the middle treble frequencies are both thinned out and distant while upper treble is almost absent entirely. This partly contributes to the 747’s midrange congestion as the similarly tuned 1More manages higher definition and separation through greater balance and by extending its treble further.

Otherwise, detail retrieval is pleasing, the 747’s have above average attack to their lower-treble even if they roll-off significantly above it. As such, treble clarity suffers and elements aren’t especially delineated, but the 747 is again, natural and tonally pleasing if not technically outstanding. Ultimately, this is a style of tuning designed to be listened to for hours on end, potentially at elevated listening volumes; and the 747 manages to deliver just enough nuance to deter dullness without invoking stridence, sibilance or fatigue. Of course, they aren’t at all suited towards any kind of critical listening, but their smooth tones aren’t hard to enjoy, excelling especially with passive listening in the background.

The 747 constructs a stage of average to intimate proportions on account of its rolled high-end and slight midrange congestion. Instrument placement is easy to perceive but hardly pinpoint accurate and separation is modest due to their style of tuning. Still, though they aren’t outstanding, they are enjoyable and no particular element is weak to the point of overall compromise.

The 747 combines a 16ohm impedance with an average to low 90dB sensitivity. And though they do connect via a typical 3.5mm plug, the 747 acts much like the 1More Dual Driver ANC due to the ANC module doubling as an amplifier. As a result, they aren’t affected by output impedance and achieve both high listening volumes and a consistent signature from any source. Additionally, ANC and amplification barely introduce any noise unlike competitors from Bose and 1More that are quite apparent.