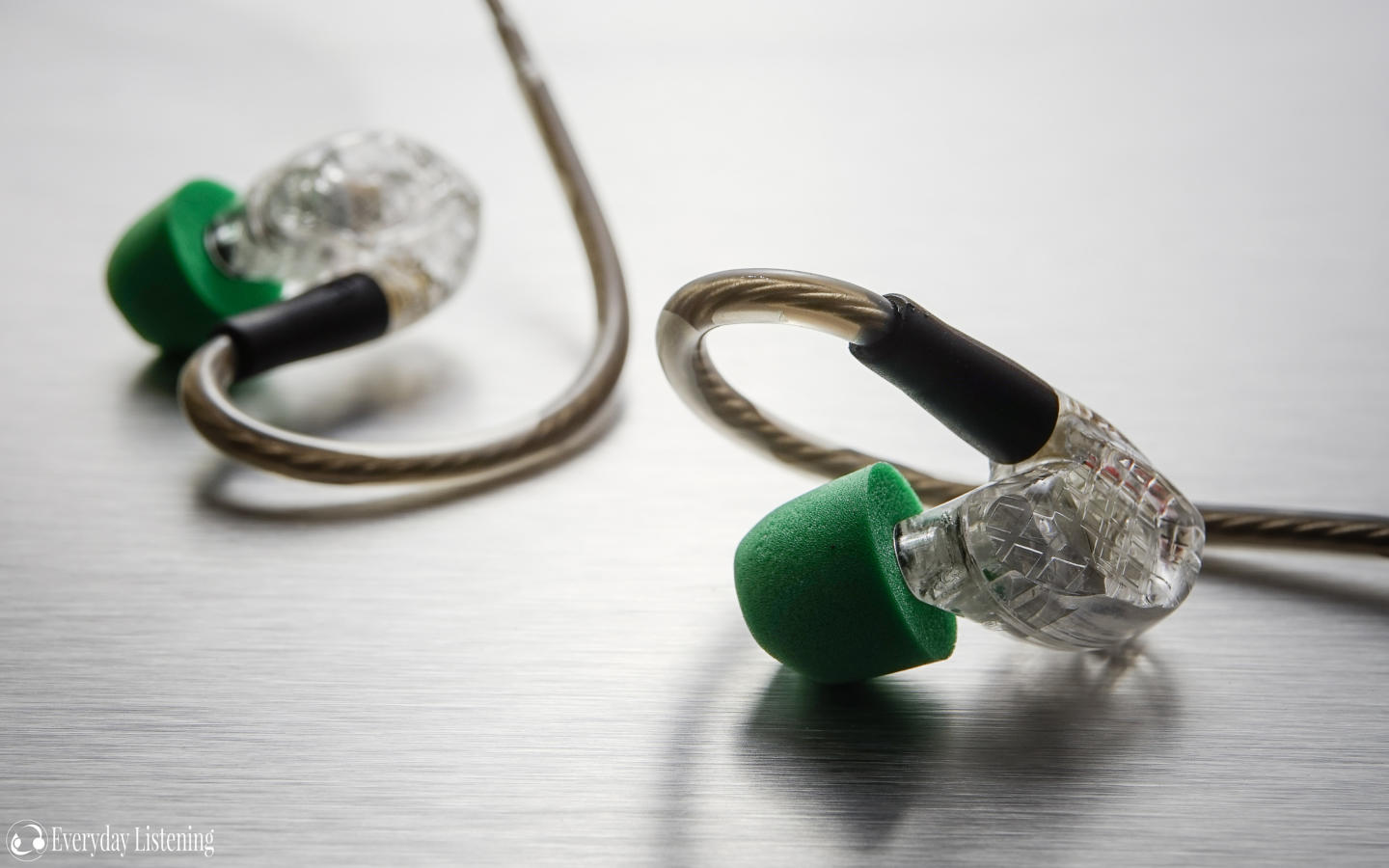 ADV 747 ($60): The 747 is Adv’s Active Noise Cancelling earphone. It has solid metal housings and a beefy cable though it does not share the wireless functionality of the Model 3. It also isn’t as balanced; being designed to be listened to in very noisy environments at higher volumes, the 747 has an L-shaped sound that avoids any form of fatigue. Bass is huge on the 747 and full on the Model 3, both are more mid-bass emphasised but the Model 3 is tighter and more balanced with greater sub-bass extension.

Mids are similarly recessed though the 747 is thicker and slightly veiled while the Model 3 is slightly brighter with enhanced clarity. The Model 3 is much more detailed within its high-end with slight lower-treble aggression and heightened air. On the contrary, the 747 is very smoothed off within its higher registers with just hints of lower treble crispness preceding considerable roll-off. As such, the Model 3 is clearly the more balanced, engaging earphone, but of course, it lacks the low-frequency noise cancelling ability of the 747.

Audiofly AF100W ($130): The AF100W is similarly a reasonably priced wireless in-ear with a more unobtrusive wireless implementation. It has one module on either side of the cable and a slider that locks them behind the head. Though sleek, the controls can be awkward to access and battery life is similarly mediocre at 5hrs. On the flipside, the earphones themselves feature the impeccable shaping of all Audiofly earphones making them just as comfortable and isolating as the Model 3 if not a little more so. And one thing that the AF100W possesses that the Model 3 lack is IPX4 water resistance making it a more responsible choice for pure active use.

That said, I do prefer the sound of the Model 3 by a fair margin as the AF100W has a strange sound signature that is quite an acquired taste. It’s quite an L-shaped earphone, but one with a strange emphasis on upper-bass. As such, it lacks some depth and impact down low and isn’t as vivid or dynamic as the Model 3. Rather, the AF100W sounds somewhat tubby within its low-end and bass spills a little into lower mids that are dry and warm. They lack the clarity of the Model 3 and a lot of its dynamics. Treble is similarly a bit dry and smoothed off on the AF100W where the Model 3 is more linear and detailed. Though the Af100W does balance out a little more in louder environments, it simply isn’t as tonally pleasing as the cheaper Model 3

Meeaudio Pinnacle P2 ($100): The P2 is one of the most resolving V-shaped earphones around this price. It has a similarly ergonomic and isolating design but can be inverted and worn cable-down too. Though it is not wireless, it has a removable cable that can be swapped with a Bluetooth unit. Its sound signature doesn’t differ substantially from the Model 3 on paper, focusing on mid-bass and lower-treble, but in listening, it is considerably more high-frequency focused and balanced down-low. Bass on the P2 is tighter and more agile but still punchy. It lacks the heft of the model 3, but sounds notably more defined and less bloated. Mids are smoother and more laid-back on the Model 3, they are also more recessed relative to its greater bass emphasis. The P2 has far greater clarity with a brighter upper-midrange.

As such, the P2 is the more revealing earphone, it also has more defined layers but it can sound a little thin and fatiguing over time. The P2 is a notably more aggressive earphone, the Model 3 is actually more linear and balanced within the higher-frequencies. The P2 is a bit more extended and produces a lot more air and bite to treble instruments such as strings and cymbals. That said, like its midrange, the P2 sounds thin and slightly artificial up top where the Model 3 is more natural but also less engaging. The P2 crafts a larger stage due to its airier, brighter composition, it is also more separated throughout. That said, the Model 3 sounds cleaner and a lot smoother, better suiting long listening sessions and higher volumes.

The Model 3 is the Bluetooth in-ear many have been searching for. It has some of the most streamlined wireless circuitry on the market, producing an ergonomic experience and a clean, reliable wireless connection. Furthermore, the earpieces themselves are comfortable and stable in the ear, just as suitable during activity as during daily commute. Passive noise isolation is also terrific and the ability to swap cables imbues confidence in their longevity.

When it comes to listening, the Model 3 continues to impress with its inviting V-shaped sound. It isn’t balanced, their mid-bass emphasis is slightly overzealous for my tastes, but they are engaging, natural and surprisingly technical. The Model 3 isn’t water resistant and battery life is on the shorter side, but this remains the best wireless in-ear I’ve tested south of $200 and the ability to swap its wireless cable to any MMCX in-ear further enhances its value.