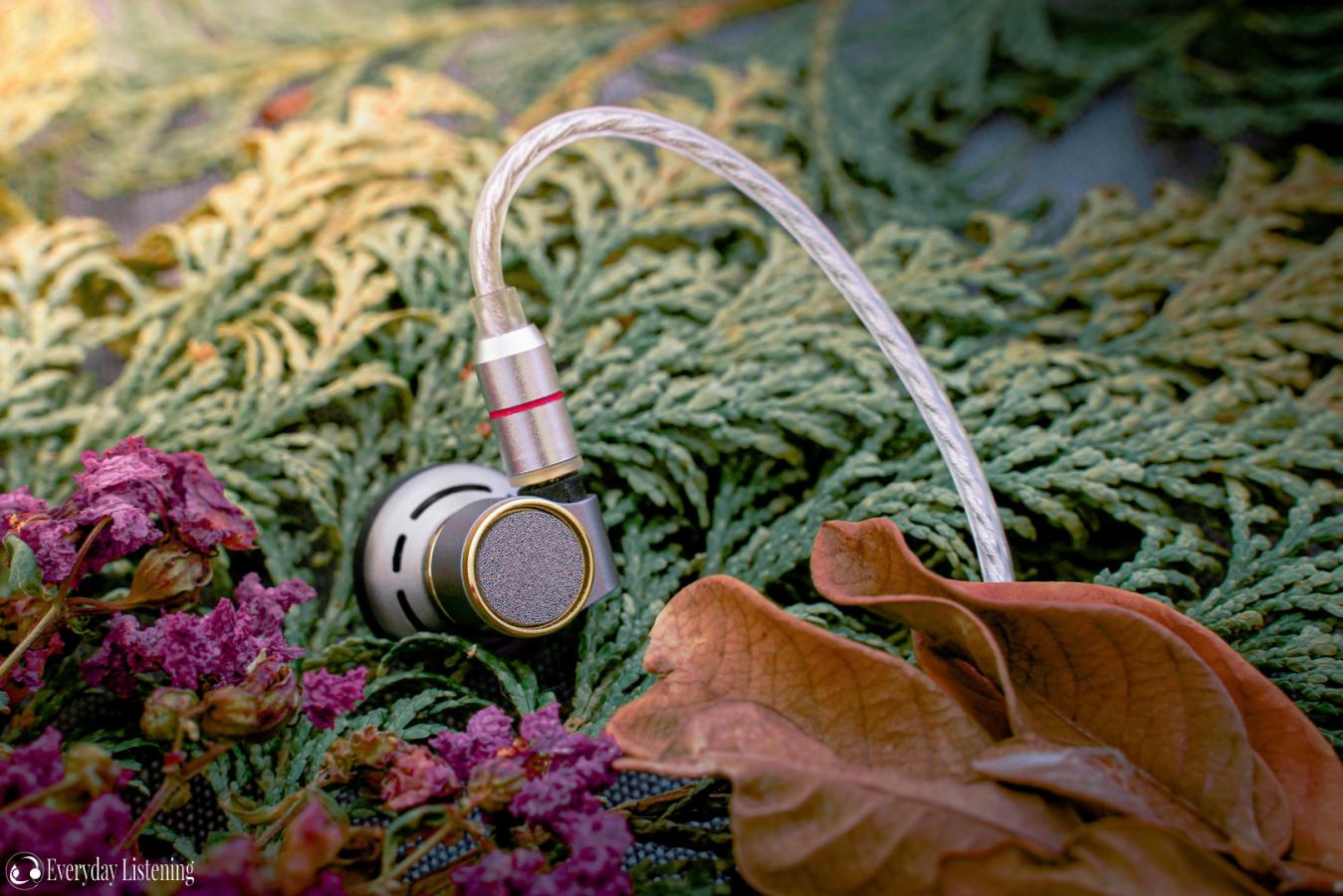 The Lyra Nature undoubtedly sounds best without foams where it delivers a natural, full-bodied and mid-forward sound. Bass is tight and reserved, however, upper-bass emphasis imbues warmth and body, ensuring it is not overshadowed. Vocals lie at the forefront of its presentation, they are full-bodied due to its full upper-bass. Highs are smooth and well-bodied with a greater focus on headroom and air over foreground aggression and crispness. The result is an organic and euphonic sound.

Though the Lyra Nature undoubtedly delivers a warm sound, bass sits clearly behind vocals. And despite its enormous drivers, the Nature remains an earbud, with minimal seal that naturally limits its bass extension. As a result, sub-bass slam and rumble are minimal with bass reaching just into the mid-bass to provide some punch and note body. Nonetheless, bass is not the most impactful, rather, it is tight, controlled and agile, delivering high definition. This seems contradictory to a fair upper-bass emphasis and warmer tone, a tuning that would usually congest an in-ear. However, utilising its form factor, the Nature is able portray warmth and body without harming separation and its bass notes are full and warm yet highly detailed. Still, this tuning does mean that bass is a touch boxy though it is not bloated or congested in the slightest.

Brought to the fore, the Nature provides a vocal presentation that deserves to be showcased. Like the Collection, it is a dense, smooth and well-bodied presentation, something that is not often found with earbuds. Upper-bass emphasis enhance body and imbues a warm tone. Meanwhile, a centre midrange emphasis is responsible for its vocal presence while aiding midrange clarity. This is imperative as the earbud also employs a fair upper-midrange dip to increase density and smoothness. The result is lush, gossamer vocals free of sibilance, hollowness or over-articulation. And though they are warm, vocals are never chesty nor congested as the mid-bass doesn’t intrude. Layers are also very defined and overall, this is an organic and natural sounding earbud that retains vocal clarity and separation.

Coming from in-ears, you don’t get the same treble extension, rolling off through the middle-treble. Nonetheless, treble is clean, focussed and open. Lower-treble is smooth and treble instrumentation sounds velvety and well-bodied. And though details aren’t pushed to the forefront, detail retrieval, is very respectable and a pleasing sense of crispness is retained. Meanwhile, middle-treble is slightly enhanced which lifts treble clarity and imbues a slight brightness. No glare is present and layers are still clearly defined, the earbud is also granted ample air and a pristine clarity without coming across as splashy or uncontrolled. Though extension isn’t especially outstanding by in-ear standards, the Nature does well for an earbud and it is easily one of the most resolving earbuds I’ve listened to.

Sans foams, the Lyra Nature crafts a wide, open soundstage that fades naturally into the environment, a quality you only get from earbuds. Width extends well beyond the head while depth is impressive given the earbud’s forward vocals, though it doesn’t extend to the same degree. Imaging is accurate with just a slightly diffuse centre image that pushes slightly to the sides. Meanwhile, though treble doesn’t stand at the fore, directional cues are sharp and pristine. Separation is a big strength, despite the earbud’s warmth. There is copious space between each note, leaving every detail defined and easily discerned. Mids are very layered and there is a palpable amount of air between the background and foreground.

With a modest 32 ohm impedance and a high 110db sensitivity, the Nature is slightly more sensitive than the standard Collection. However, as it has a poor seal and sits further from the eardrum than IEMs, it does require a bit more volume than its numbers would suggest. Nonetheless, this is an earbud that delivers ample volume from portable sources yet scales well with amplification, where the added power aids driver control and the general definition of its sound. Being a single dynamic driver earbud, output impedance is of no obstacle, delivering an identical tonality from my high output impedance sources. Despite its already warmer tuning, I found the Lyra Nature to pair well with a powerful source with a warm low-end such as the Shozy Alien+ as the extra control tames bloat while the added body aids bass/midrange balance.

Penon BS-1 Official ($100) [Donut Foams]: A value champ, the BS-1 is a fan favourite and for good reason. It offers a more engaging sound than the Nature but also a less natural one. Bass extension is stronger on the BS-1 and it has a slightly warmer sound with plumper mid-bass notes. However, its bass isn’t nearly as clean and defined as the Nature, though it is more inviting, especially for those coming from IEMs. The midrange is very clear on the BS-1, even with foams and vocals are just a touch recessed. Vocals are also sapped of body on behalf of a lower-midrange dip and upper-midrange emphasis though they are also warm due to the earbud’s forward bass. The Nature is clearer and more tonally transparent, it is more natural here while simultaneously being more revealing. Up top, the BS-1 has less extension but also possesses more detail presence on behalf of its more forward lower-treble. It also has an emphasis on air, however, as it does not extend as far, it does not create the same sense of headroom. This impression extends to the soundstage where the Lyra Nature is more open and has sharper imaging.

Lyra Classic ($170) [Donut Foams]: Astrotec’s previous midrange Lyra earbud, the Classic also offers a slightly more balanced sound by reducing midrange emphasis, however, it is also mid forward. Bass extension is not as strong as the Lyra Nature and it doesn’t have the same impact, even with foams. It also doesn’t have the same separation and bass definition, sounding considerably hazier down low. Within the midrange, both possess forward vocals, the Nature to a slightly greater extent. The Classic has more lower-midrange presence and less upper-midrange making it technically more linear and balanced, but it also sounds veiled by comparison. In isolation, it is a reasonably clean and slightly dense earbud, however, the Nature is clearly more transparent and revealing. Highs tell a similar story, the Nature being more detailed and extended, the Classic being less so. I feel this is also a byproduct of the move to no foams that were necessary to achieve any sort of bass on the Classic. The Nature also has a larger soundstage and its imaging is much sharper, this is a huge step forward for midrange Lyra earbuds.

Lyra Collection ($300) [VE Monk+ Foams]: Astrotec’s most expensive Lyra earbud but now one generation superseded, the Collection still provides great range and quality. Immediately, it is a more balanced sound, introducing greater bass presence. Bass extension is significantly better and though bass notes are larger and warmer, it is just as controlled and defined if slightly smoother in texture. As its bass is more present, its vocals don’t sound quite as forward though they still hold reasonable prominence. They have a similar clarity but are imbued with additional body and, in particular, density which stems from a less present upper-midrange. The Lyra Collection, therefore, sacrifices some transparency to the Nature in favour for a more full-bodied, organic presentation. Highs are smoother on the Collection, but this is also a by-product of using foams. They are similarly detailed and extend a hair further, creating greater resolution. The soundstage presentation is similar, but with less separation on behalf of its warmer sound.

I was not expecting to enjoy the Nature as much as I did! After 5 generations of Lyra earbuds, it’s clear that Astrotec has learnt what makes every model tick and imbued the latest with the greatest. The Lyra Nature is strikingly clean, open and concise. Though it does not possess much bass quantity and warmth, it is still easy on the ear and even slightly organic in body. Other earbuds may provide greater bass extension, but few can match the Nature’s clean, revealing yet natural vocal presentation and agile, tactful transients. By retaining Astrotec’s signature build quality while introducing a removable cable, the Lyra range of earbuds are now as versatile as they are stunning.

The Lyra Nature can be purchased from Astrotec for $169 USD. I am not affiliated with Asrotec and receive no earnings from purchases through this link.