Sandisk Sansa Clip+: The 8X sounds good with the Clip+ and doesn’t exhibit any weaknesses.  The balance is good across the spectrum and the presentation space is decent.  Bass isn’t as powerful as with higher-end sources, but isn’t lacking. 5/10
Apple iPhone 5: While not much different than the Clip+, the iPhone 5 presents with a slightly more laid-back presentation that has a bit higher instrument separation, leading to slightly better clarity.  Bass is also slightly more powerful.  Overall, the differences between the two are very minimal. 5/10
Hisoundaudio RoCoo BA: Compared with the iPhone 5, the bass quantity is significantly less, but not absent.  The overall presentation is more forward with similar presentation size, space, and detail levels.  There is no real advantage of the RoCoo BA over the iPhone 5 when paired with the 8X unless you want less bass.  There is a slight hiss that can be heard at times with the BA that can’t be heard with the iPhone 5, reducing the score by 0.5. 4.5/10
Hisoundaudio Nova (HSA set to User): The Nova is closer to the RoCoo BA than the iPhone 5, as the presentation isn’t really an improvement, and the bass quantity is lower than that of the iPhone 5.  Clarity, space, detail, and other traits are similar, but the Nova is slightly more forward.  There is no noticeable hiss.  5/10
Fiio X3: The X3 is closest to the Clip+ presentation, but is a bit brighter while still retaining bass quantity and punch.  Spatially, it is slightly larger than the iPhone, RoCoo, Nova, and Clip+, and while closer, it doesn’t have the spatial presentation of the DX50.  There is no hiss with the 8X. 6/10
iBasso DX50: The DX50 shares the presentation style of the DX100, which is a bit more laid-back than the Nova, X3, AK120, or 901.  The DX100 has more bass and presents with more power and better layering, but the DX50 presentation is a bit cleaner and clearer, falling closer to that of the AK120 in quality. Compared with the X3, the DX50 has a bit larger presentation space and slightly more powerful bass.  There is a slight bit of hiss with the 8X.  7.5/10
AK120: This pairing adds a bit of detail, depth of presentation, space, and bass weight to the iPhone 5 presentation, but the biggest improvements come in clarity and cleanliness of the presentation.  The iPhone 5 sounds a bit messy in comparison to the more refined AK120. 8.5/10
HiFi Man 901: The differences between the AK120 and 901 are minimal, with the 901 presenting with a bit more soundstage space, otherwise sounding very similar. 8.5/10
iBasso DX100: The DX100 differs from the AK120 and 901 in that it is more laid-back and has more depth to the presentation, giving a more 3D sound with better instrument separation and layering.  It also is warmer with more bass, but the bass region of the 8X isn’t as controlled as with other source.  The midrange is thicker and the treble is more analytical, which lowers clarity in the mids and adds harshness to the more detailed treble.  If you have spacious tracks that don’t have much bass, the DX100 could be a good choice, otherwise the AK120 and 901 are overall better. 7/10

Source Summary: The AUD-8X performs relatively well from entry-level sources such as the Clip+ and iPhone 5, and while upgrading to better sources improves the sound, the changes aren’t very significant.  Bass impact and depth do improve with many higher end sources, but if there is too much bass power, control can suffer.  Paired sources don’t significantly alter the midrange when it is too thick, except the Ortofon MHd-Q7 amp. 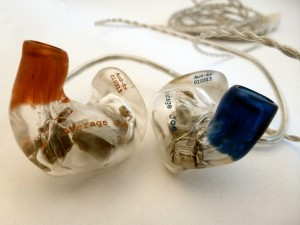 SUMMARY
The Audio Earz AUD-8X by Dream Earz is designed to be a full range, high performing, relatively neutral custom in-ear monitor at a reasonable price.  The fun, dynamic, and engaging sound is better for those that want active involvement with their music rather than listen to a flat reference tool or something to use as background music.  Technically, the 8X performs at a very high level with excellent dynamic range, detail levels, imaging, and creation of soundstage space.

While there are many very good aspects of the AUD-8X, notes in the midrange are on the thicker side which can create a slight veil, reducing clarity with audio tracks that have been mastered with their own thickness.  Luckily, this doesn’t happen too often.  Transparency and coherence, while good for the price range, don’t compare with the higher cost CIEMs used for comparison.  With 8 drivers, it can keep up in most ways with more expensive 8-driver CIEMs, but the tonality isn’t on par with the best.  Even with these issues, the Audio Earz AUD-8X is a very capable and enjoyable custom in-ear monitor that will please many people.

–       High levels of detail in comparison with similarly priced IEMs/CIEMs

Previous page: Comparisons with other custom and universal in-ear monitors.