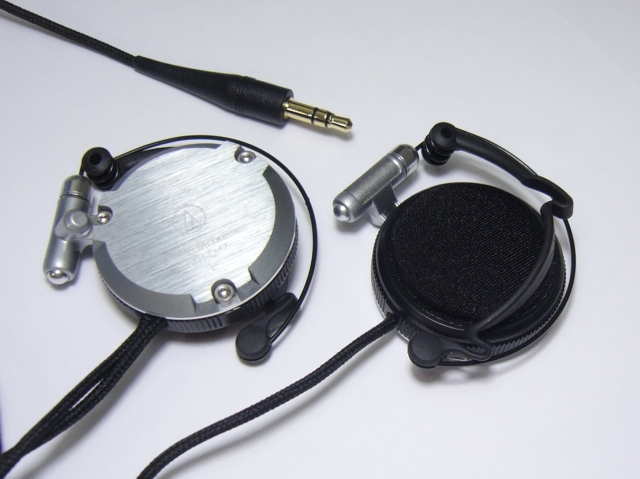 Build Quality (7/10): The construction of the ATH-EM7 is sturdy, yet delicate. The shells are a combination of forged aluminum and plastic and look just as handsome in person as they do on photos. The dual wire-and-rubber earhook construction is probably the weakest part of the headphones. The clips of the EM7 are unique in being adjustable vertically to optimally position the drivers on the ear. In addition, the earhooks swing outward and back into place with a satisfying metallic click to allow for easy removal of the headphones. The modular j-cord is nylon-wrapped and rather thick. It doesn’t tangle and should be more than sturdy enough for everyday use. A soft carrying case is provided with the headphones.

Comfort (8/10): The dual earhook system of the EM7 takes some getting used to but the stretchy rubber hook does a good job of taking pressure off the thin earhanger. The vertical-axis adjustment of the earhooks and spring-loaded swinging hinge ensures a great fit every time and they stay on rather securely compared to the larger and heavier Koss clip-ons. The cloth pads are also wonderfully cushy and very smooth. However, the EM7 is heavier than the similarly-small Sony MDR-Q68 and I never quite managed to forget that I’m wearing the Audio-Technicas the way I did with the Sonys.

Isolation (4/10): Typical of a small clip-on but the spring-loaded fit and soft pads help the EM7 isolate a bit more than the Sony MDR-Q68 and Kanen KM-95.

Sound (6.5/10): The sound of the ATH-EM7 GM seems fittingly lightweight an airy for the small and stylish clip-ons. The overall signature of the EM7 reminds me strongly of Audio-Technica’s BA-based earphones, namely the ATH-CK10. While nowhere near as nuanced and detailed as the CK10, the EM7 is very quick and clear. The bass is fast, tight, and accurate. It rolls off rather early at the bottom but the level of control makes the low end of my Koss KSC75 seem woolly and slow in comparison. Because the bass is so subdued, the midrange and treble are the focus of the EM7’s presentation. The mids are forward and transparent. Out of the box, the upper midrange of the EM7 was a bit overpowering, giving them a somewhat honky and metallic sound, but seemed to settle in over time. The clarity and detail certainly make it all worthwhile. Those who are sensitive to peaks in the upper mids and lower treble should probably avoid the EM7 like the plague, though.

The treble of the EM7 is crisp and detailed. It possesses bell-like clarity and sparkle and is generally presented very confidently. Top-end extension is very good and the midrange/treble-heavy balance results in a somewhat cold tone. The overall presentation is relatively wide and a bit distant. The Audio-Technicas generally convey space quite well but lack depth, resulting in a flatter sonic image. All in all, while the signature of the EM7 may be fatiguing for some, there is no questioning its technical proficiency – the headphone may not be as warm and fun as the Koss clip-ons, but it is more detailed, controlled, and accurate and, while I don’t see myself giving up the KSC75 for casual listening, I admit that the EM7 GM is the better critical listening device.

Value (8/10): Released back in 2002, the Audio-Technica ATH-EM7 GM may be one of the oldest models in this lineup but it is by no means outdated. The machined aluminum finish and innovative two-axis earclip system are just as fresh and functional today as they were nearly a decade ago and the EM7 is more secure and comfortable than the majority of my clip-ons, past and present. The sound, too, is rather refreshing next to the bass-heavy Koss and Sennheiser models in the price range – the EM7 is clear and detailed, giving up the warmth, intimacy, and fullness of the KSC75/35 for a faster and more controlled sound but personal preferences can, as usual, tip the scale either way.