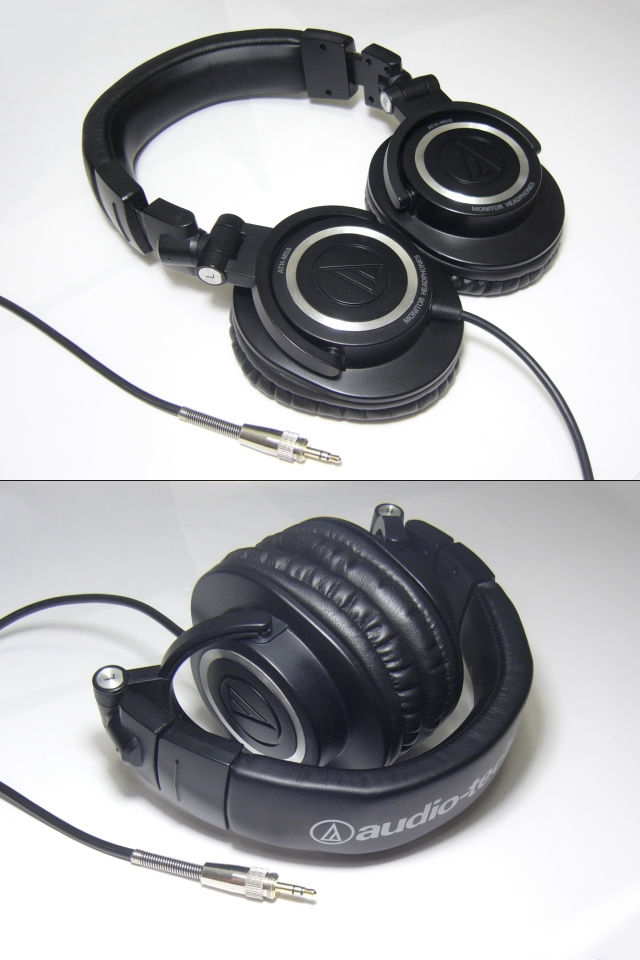 Brief: Aging flagship of Audio-Technica’s extensive range of DJ headphones, interest in which has been unwavering for many years

Build Quality (9/10): The build of the ATH-M50 is quite similar to that of the Denon DN-HP700 – heavy plastics intertwined with metal structural and cosmetic elements. The cord is long and thick and the 3.5mm plug is relieved with a metal spring. Overall a very solid construction that definitely feels like it should stand the test of time.

Comfort (9/10): The oval pads of the ATH-M50 work very well without being too large. Both the headband and earcups are padded more generously than those on my Denon HP700 and Ultrasone HFI-450. Additionally, the ATH-M50 is far lighter than higher-end Ultrasone DJ cans such as the Ultrasone Pro 650, making it a bit more comfortable in the long run. Like most circumaural phones they can get a bit hot and sweaty, though.

Isolation (8/10): The soft pads and moderate clamping force result in impressive isolation, up there with the harder-clamping HFI-450 and much larger Pro 650.

Sound (8.75/10): During my initial listening sessions with the ATH-M50, I was stricken by how neatly the headphone slots in between my two other favorite circumaural DJ cans – the Denon DN-HP700 and Ultrasone Pro 650. Since the ATH-M50 is currently a very popular – some would say FOTM – closed can and reviews are plentiful, I will try to focus more on comparisons with the HP700 and Pro 650, as well as my go-to HD25s. I’ve seen the ATH-M50 described as being bass monsters, balanced, V-shaped, and everything in between. Truth is, the Audio-Technicas are incredibly versatile headphones. Unlike the Ultrasone Pro 650 and, to a lesser extent, the Denon HP700, the ATH-M50 can be satisfied by a decent portable source, but only just. If forced to forego amplification, I would undoubtedly pick the M50 over both the HP700 and Pro 650.

As usual, I started my comparisons with bass tests. The low end of the M50 is definitely plentiful by my standards. The bass is full-bodied and has great depth and smoothness. Mid-bass is punchy, clean, and controlled. The bass of the Senn HD25 is still a bit quicker but the Audio-Technicas sound slightly more natural on non-electronic tracks. The low end of the Denon HP700 is also a bit tighter than that of the M50s, especially when both are running off of a dedicated amp but the Denons are unlikely to satisfy a bass lover in ways the M50s can. Compared, on the other hand, to the much pricier Ultrasone Pro 650, the bass of the ATH-M50 is neither as warm nor as smooth but also less boomy in nature.

The midrange of the ATH-M50 is clear and competent but it is obviously not the focus of the presentation – the bass and treble of the M50 are stronger in comparison. The recession is stronger towards the top of the midrange but the V-shaped nature of the response really is very mild. Overall detail is quite good though microdetail and texture are still better on the HD25. In contrast, the treble of the M50 is unusually satisfying. It boasts great extension, plenty of sparkle, and excellent detail. It is also very crisp and lags in clarity only slightly behind the HD25. Though the highs share a similar tonal character, the HD25 is far more strident near the top and as a result more fatiguing. Those who are treble-sensitive may want to give the ATH-M50 a pass anyway but it should be noted that the Denon HP700 is even brighter and more sparkly than the M50 is. The treble of the Ultrasone Pro 650, on the other hand, is quite de-emphasized compared to the others and is unlikely to fatigue anyone, all at the expense of a bit of detail and resolution.

When it comes to presentation the ATH-M50 again holds its own quite easily against the competition. The soundstage has good depth and width for a closed can and doesn’t sound particularly intimate (a-la HD25) or distant (a-la both of my Ultrasones). The tone is a bit warm compared to the brighter and less bassy Denon HP700 but quite close to neutral on the grand scale. Imaging and positioning are quite solid as well for a $100 can, especially when amped properly – better than those of the HP700, which sounds more airy and spacious but doesn’t separate instruments as precisely as the ATH-M50 does. On the whole the presentation of the ATH-M50 won’t put the fear of being sold off into my pricier full-size cans just yet but will give anything in its class a run for the money.

Value (9.5/10): The Audio-Technica ATH-M50 may be the most widely-recommended headphone at head-fi at the time of writing, and with good reason – the set manages to be well-rounded and fun at the same time – two qualities many undoubtedly find desirable in a portable set. Add in a combination of durability, comfort, and isolation to match the best portable headphones on the market and we can see why the popularity of the M50s is justified. It’s not the be-all end-all portable solution for everyone – some will undoubtedly find the bass too heavy, the treble too aggressive, or the upper mids too de-emphasized – but that’s the nature of the hobby. For those who would end up going insane asking ‘what if’ when using the ATH-M50 unamped, there’s the Numark PHX Pro. For everyone else, the Audio-Technicas are easily worth the asking price.