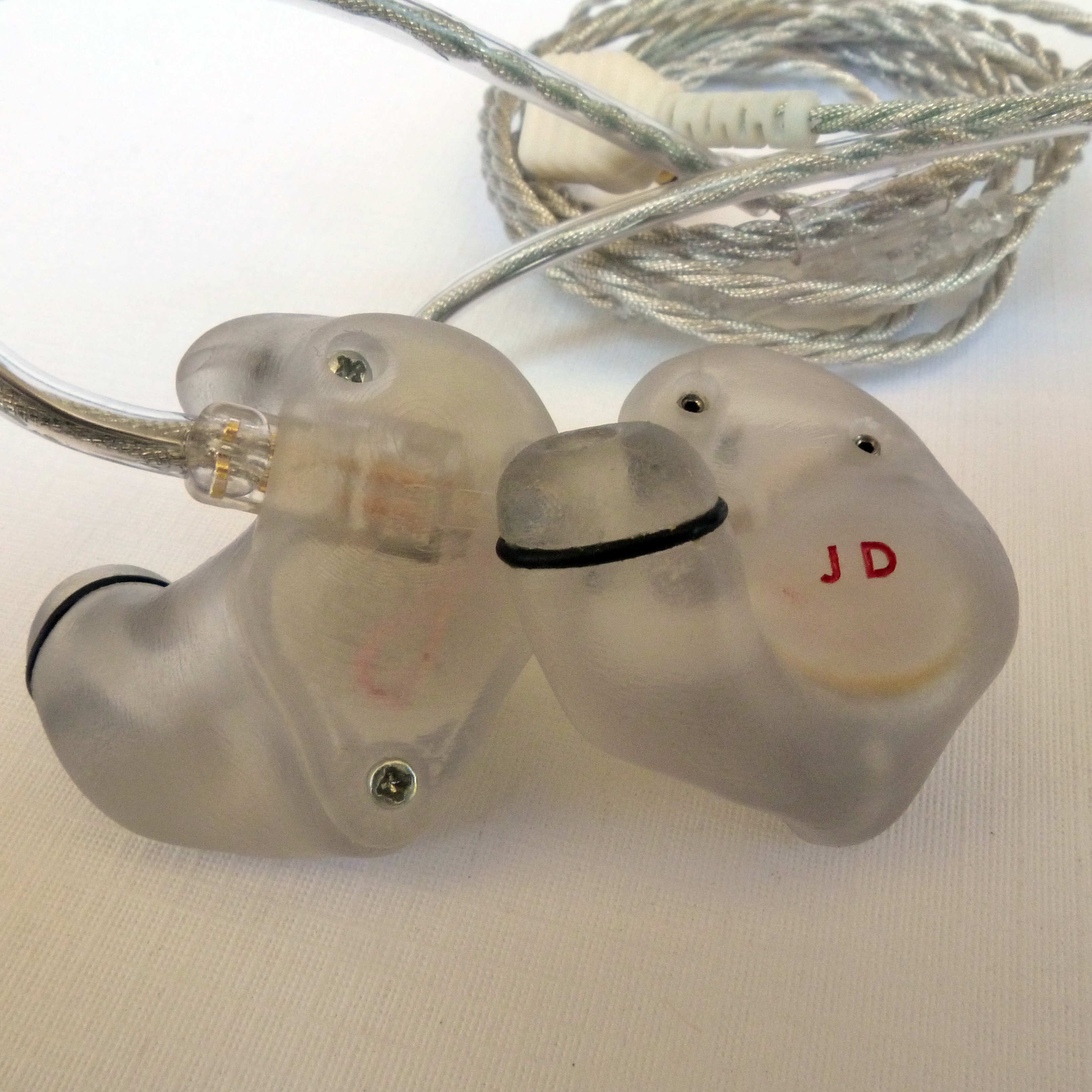 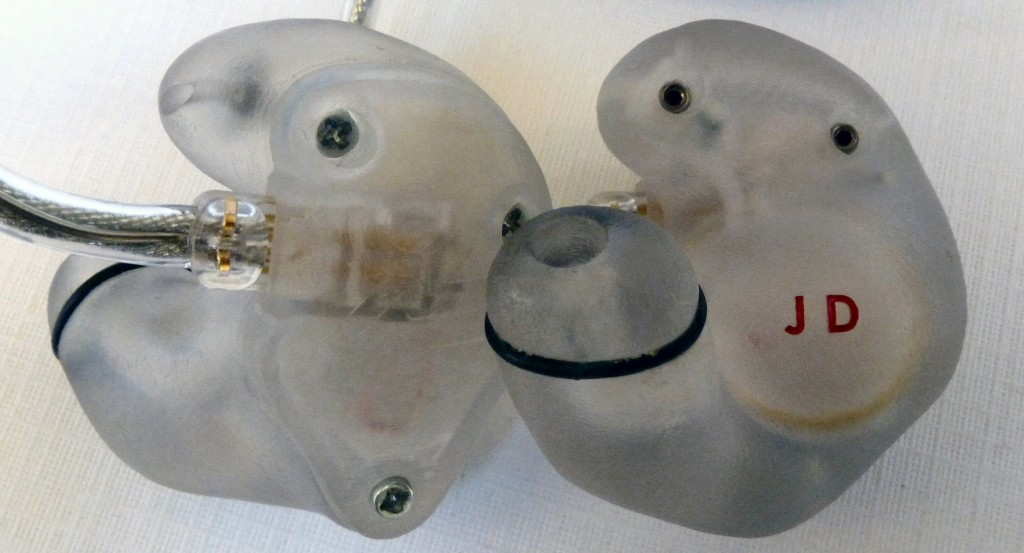 The offerings in the custom IEM market are continuing to grow at a rapid pace, and one of the newer companies is Aurisonics, which is run by Dale Lott.  Aurisonics hit the ground running with the ASG-1 universal and AS-1b custom IEM that both utilize a single dynamic driver with bass tuning and ambient port options.  The ASG-1 and AS-1b were tuned specifically for stage use and musicians, however the head-fi effect has kicked in and Dale has changed the tuning to better please that crowd, creating version 1.2.

Design
Single 15mm dynamic driver in an acrylic shell with recessed sockets and detachable cables.  The b version of the AS-1 has adjustable ambient ports and an adjustable bass port.  Version 1.2 has an added filter to change the sound signature.

Accessories
The AS-1b comes with a 2000 series Otter box which easily fits the AS-1b, tool to adjust the ports, pouch, cleaning tool, and instructions.

Cable
The cable is a standard silver cable that will turn green over time due to oxidization.

Usability & Durability
With a 15mm dynamic driver, there have been some hiccups in the AS-1b as the venting has been changed over time.  Dale has been hard at work resolving issues and

Initially when I was listening to the AS-1b I was a little disappointed, so I decided to burn them in for 300+ hours since my experience with the IE8 through the first 250 hours of use.  After 300+ hours I was still disappointed as both ends of the spectrum were rolled off and dynamics weren’t great.  I then decided to play with the ports.

Note that the ASG-1 I heard (and sold to a friend) is brighter than the AS-1b with better clarity.  After talking with Dale about the AS-1b I have, he recommended removing the version 1.2 ports, which I did resulting in a bit better clarity and openness to the sound.  However, he also mentioned that my AS-1b may sound darker because of the size of my ears and the configuration since dynamic drivers change more with the internal shell volume compared with balanced armatures.  Fortunately, Dale is all about continuous improvement, so he is working on bettering those issues.

Bass port: The AS-1b sounded flat and the frequency extremes were rolled off quite a bit with the bass port closed, but opening it changed everything.  Not only did the bass improve quite a bit, but the treble also became more present and airy while overall dynamics improved.  All testing was performed with the bass port opened.

Ambient port: Opening the ambient port reduces the isolation, but it didn’t seem to have a huge effect, possibly 2-3 dB.  What it did do is lower the deep bass output significantly, so I chose to leave the ambient port closed for the testing.

Bass: If I were to use one word to describe the bass of the AS-1b, it would be capable.  It doesn’t overwhelm or even sound too enhanced, but it conveys a sense of power along with articulation.  Songs with heavy bass kick and pound while other songs that have more neutral bass aren’t overdone resulting in an enjoyable and

Midrange: With a forward presentation, the midrange is the focus of the AS-1b. While I can’t say it was clean, it does have an interesting space about it.  The thickness makes the presentation rich and the forwardness is like being front-row in a jazz club with a vocalist right in your lap and plenty of acoustic absorbing material around the venue.  Upon initial listen it can be a shock to an audiophile, but to a stage performer, it can be just what the doctor ordered.

Treble: The treble is laid back quite a bit and rolls off starting at 10 KHz and is inaudible with test tones and no EQ above 13K.  The i9pro with a 14 mm dynamic driver also rolls off sooner than the BA custom IEMs I have heard in this price range, so it may just be dynamic driver performance.  EQ does improve the brightness, but not significantly.  What is there is of good quality with a natural note decay, although the notes aren’t the smoothest.  This is not the CIEM for people that want a bright sound.

Comparisons (all comparisons with the AS-1b were with the bass port opened):

EM3 Pro: The EM3 Pro and AS-1b are quite similar in many ways ranging from the overall tonal qualities to the thickness to the laid back treble, although the AS-1b is a bit darker and thicker with less clarity.  Spatially they share great soundstage depth, but the EM3 Pro has a bit more depth in a tradeoff for less width along with a more mid-forward presentation.  Tonally the EM3 Pro is a slight bit brighter, but the response across the rest of the spectrum is quite close.  Detail levels are higher on the EM3 Pro and the upper end is more liquid while the lower end of the AS-1b has more power and refinement with similar control.

Essentially, the EM3 Pro is a more expensive, slightly more detailed and slightly brighter AS-1b.  If bass performance is paramount for you, the AS-1b does outperform the EM3 Pro.

Source matching
Portable Sources, DAPs
Clip+: The Clip+ restricts the spaciousness of the AS-1b and doesn’t have the smoothest presentation. 3/10
iPhone 3G: The 3G is on the darker side and lacks the resolution of every other source I have tried. 2/10
RoCoo BA: A step up from the Clip+, especially in spaciousness as it doesn’t sound compressed like the Clip+.  The rest of the spectrum is cleaner, but not by a huge margin.  Overall the BA is a nice affordable and highly portable source. 5/10
801 (with GAME card): The 801 adds clarity through an improved top end and a bit of detail to the presentation of the BA, along with a further improvement to the spaciousness. 7/10
DX100: Taking the 801 one step further, the DX100 further improved upon clarity by increasing upon the clarity. 8/10

801 ->
EHP-O2: Not much of a difference between the headphone out with the GAME card and the EHP-O2.  The O2 has a slight bit better overall space, but it is extremely slight.
627: This is a step up from the HPO of the 801, offering better clarity and space to the presentation.  This is the best I have heard the AS-1b sound! 10/10

Desktop Sources
Cruise: The bright and fast Cruise is one of the best matches with the AS-1b I have heard as boost clarity and gives a good sense of speed while retaining the spatial qualities of the presentation.  Unfortunately there is hiss with the AS-1b, taking the score down. 8.5/10 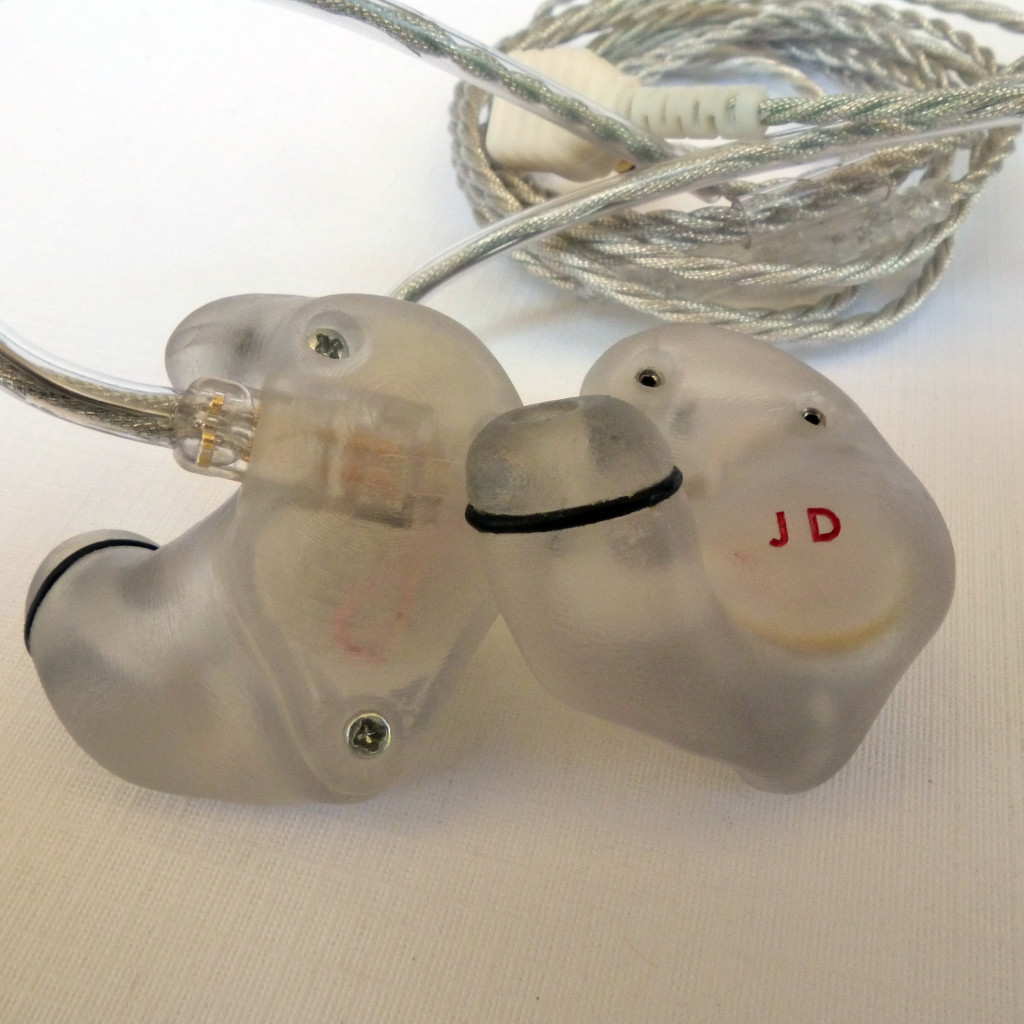 Summary
Let me start by saying something seemed off, so take my summary with a grain of salt.  The AS-1b is a mid-focused CIEM that rolls off on both ends of the spectrum, however the sound does have some qualities that are very nice, including the spaciousness and depth of presentation.  But, be prepared for a thick and rich sound.  I did send the AS-1b back and am still waiting for the AS-2, which adds balanced armature drivers for an improved treble response.