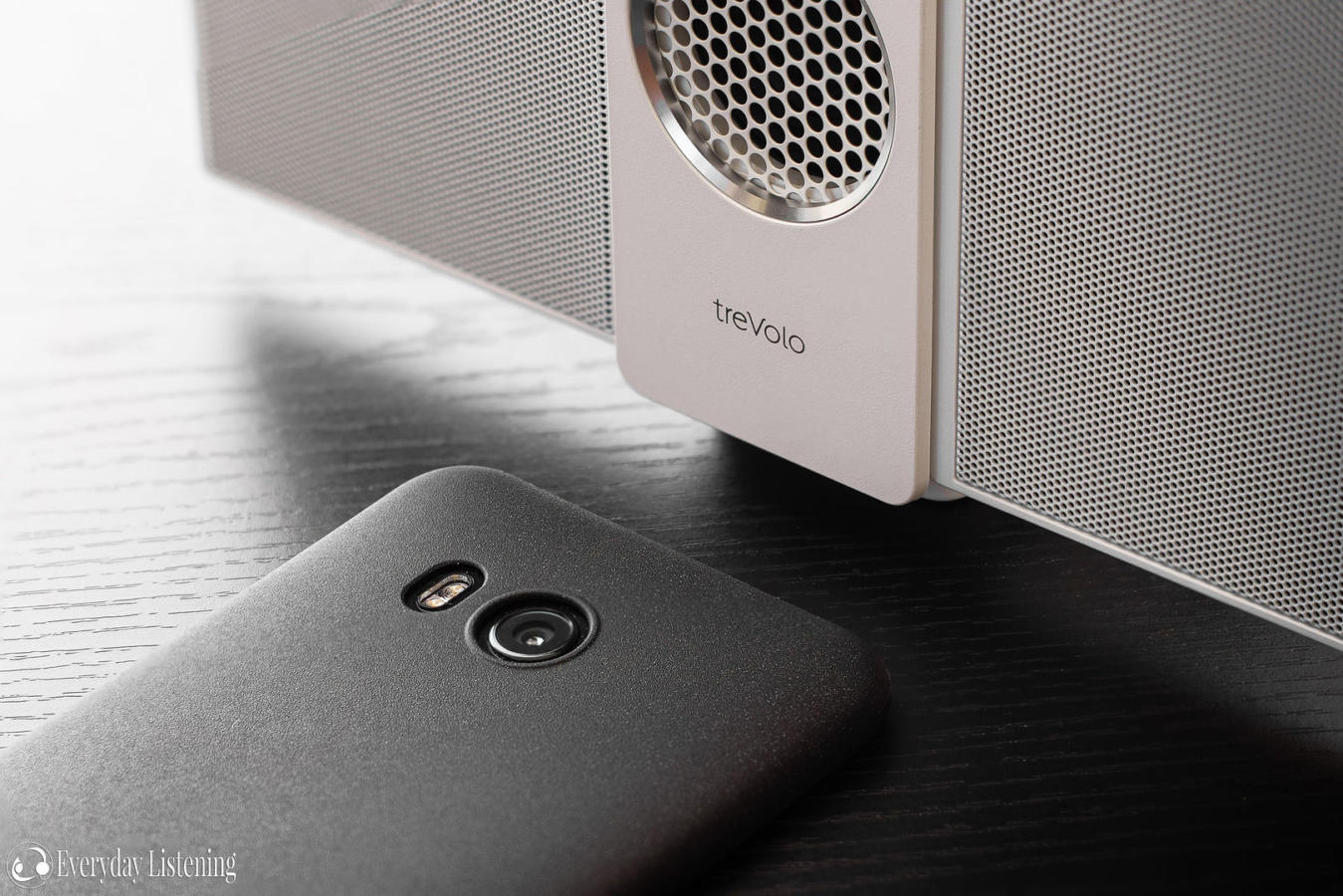 Denon Envaya Mini ($150): The Envaya Mini is my personal reference as it does everything a portable speaker should do and, for the most part, it does it well. The treVolo S does successfully provides a much more balanced, nuanced sound though it does so at a significantly higher price and within a larger, non-ruggedized form factor. Immediately, the Envaya Mini is more bass focussed, it extends a noticeably further, delivering more impact and slam. It has more mid-bass and considerably more upper-bass producing a much richer, warmer sound. However, it also lacks the control and separation of the treVolo S, sounding muddy and ill-defined by comparison. Still, it’s very full and engaging, better suiting larger spaces where low-frequencies tend to get drowned out.

As the treVolo has the more neutral bass response, its midrange is significantly more transparent. The Envaya Mini is darker and thicker, with poorly mastered albums it can sound muffled. It also has very recessed vocals relative to the treVolo S, though it has pleasing clarity that ensures voices are never drowned out. Still, the treVolo S excels with its midrange balance and linearity, midrange elements are more in focus and the treVolo’s sound has a lot more detail through this range. The treVolo has a more prominent lower-treble than the Envaya Mini, sounding crisper and clearer. However, it simultaneously sounds more detailed as it’s more linear and even from its upper-midrange; where the Envaya sounds more spiked due a more jarring transition from its recessed midrange.

The Envaya rolls off quickly after that initial crispness, it’s nicely detailed but provides little nuance beyond face value. The treVolo S on the other hand extends much further, even though these frequencies are more subdued to preserve a clean background. As such, the treVolo S produces a more layered presentation with greater micro-detail and noticeably more ambiance than the Denon. The Envaya Mini actually has some psycho-acoustic processing that lends the impression of a larger soundstage, though the treVolo S achieves a similar effect through more natural means; greater treble extension, superior separation and a wider stereo image.

UE Boom ($200): The UE Boom is not an especially great sounding speaker, but it has achieved huge popularity due to its effective 360 degree projection of sound, very high max volume and excellent battery life. The UE Boom has a pretty disappointing bass reproduction. It has little extension with a an upper-bass hump to compensate. The treVolo S extends further, delivering more punch and its more linear bass is more detailed and defined. The UE Boom has a pleasant midrange, it’s clear with an emphasis on upper midrange and articulation. The treVolo S doesn’t have the same sense of clarity, but it lacks the same upper-bass chestiness and sucked out lower-midrange. As such, it sounds a lot more natural if less vibrant.

The UE Boom is a little sibilant and lacks nuance, it’s a fairly superficial presentation, especially compared to the treVolo S and Envaya Mini. Both speakers have similar lower-treble quantity, making them crisper than neutral. That said, the UE Boom is sorely lacking detail. The UE Boom has no extension above its initial crispness while the treVolo S extends significantly further, delivering higher resolution and greater micro-detail retrieval. The treVolo has much more separation enabling the listener to discern layers and intricacies that the UE Boom glosses over entirely. Given its design, the UE Boom has zero stereo image, both speakers can be paired in stereo though the treVolo has the added advantage of providing some soundstage even on its own. This demonstrates that popularity isn’t always the best buy!

Edifier MP700 ($250): This isn’t a fair comparison as the MP700 is considerably larger than the treVolo S, but it’s also a very sophisticated speaker with a balanced tuning, and one that has a similar asking price to the BenQ. The MP700 provides a fuller, more extended bass response, which probably isn’t surprising as the speaker is significantly larger with 5 drivers dedicated to the low-end. It has significantly more depth and dynamics in addition to greater control and definition. The MP700 is actually tuned very similarly, slightly fuller in its mid-bass but not overdone and nicely balanced on a whole. Where the two speakers start to diverge is within their midrange.

Both extend very well up top and produce cleaner backgrounds, though the treVolo S is slightly airier. The MP700 produces a slightly wider soundstage due to its physically larger dimensions though both resolve layers and smaller details that the majority of portable speakers don’t even glimpse. Of course, the MP700 has the ability to get much louder, and it does boast a more powerful sound as its size would suggest, but it’s still impressive to see how small the differences are besides bass.

As an audio enthusiast, I could fawn over the treVolo S’s sound all day. But in reality, the majority of portable speaker users will likely have more mixed use cases than myself. In this regard, the treVolo S falls short; treble is very directional, maximum volume is limited and its lack of life proofing makes it a questionable choice for some users. Because the treVolo S ironically represents bold underlying innovation within a market infatuated with the superficial. Where many are content with colourful lifestyle speakers with similarly coloured sounds, the treVolo S instead targets the discerning listener searching for greater balance and nuance.

It’s also a statement from BenQ; this isn’t a half-hearted throwaway, but a determined, fully realised effort to compete with the best. To my ear, they’ve achieved that feat. The treVolo S is balanced, natural and immensely detailed. It also does so without compromising form factor and excels with an extensive 18hr battery life. Utilising electrostatic tweeters, the speaker competes with much larger solutions in terms of resolution and detail and provides greater stereo separation. This costs the consumer, but its higher price is justified through BenQ’s effective implementation of technologies that provide genuine benefit to sonic performance. The treVolo S, therefore, suits those that prioritise sound quality, and to that end, it delivers with aplomb.