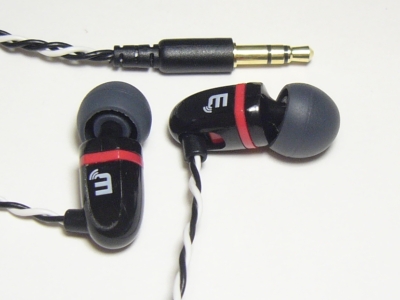 Accessories (4/5): Single-flange silicone tips (6 pairs in 3 sizes), Comply T100, 6.3mm adapter, airplane adapter, and hard clamshell carrying case
Build Quality (3.5/5) – The shells consist of two layers of plastic and feel slightly cheap to the touch. Some sharp edges are left by the molding process and the strain relief on cable entry, while functional, is quite short. The black-and-white cable is very similar to the twisted cords found on Westone earphones and feels quite sturdy. The Y-split is well-relieved but the 3.5mm straight plug is a bit wimpy
Isolation (3.5/5) – Quite good with single-flange tips and even better with aftermarket triples
Microphonics (4/5) – Present when worn cord-down, almost nonexistent when worn over-the-ear
Comfort (4/5) – The angled-nozzle housings can be worn both cord-down and over-the-ear in the same way as the Klipsch S4 but are quite a bit longer and may not be as fitting for those with smaller ears as the S4

Sound (9.2/10) – From Fischer Audio DBA-02 Review – Despite being a relative newcomer on the international hi-fi scene, Fischer Audio have already caused quite a stir with their highly competitive midrange earphones. The Eterna, which I reviewed previously, won me over with its uncompromising musicality and fun factor despite being so very far from my preferred sound signature. But I’ve never made a secret of being after a far more analytical sound. There are many out there who claim that analytical earphones are antithetical to music enjoyment – that they cause the listener to hear the earphones and not the music. But for me a proper analytical earphone is quite relaxing – it never forces me to focus my attention on this or that to pick up on every detail and I find this more relaxing than listening to an earphone with the sound signature equivalent of a rocking chair (e.g. MTPG).

On that note, I will say that the DBA-02 is one of the best all-around earphones I have heard for the type of sound I am after. I will compare it mostly to the Audio-Technica CK10 as the two share an uncanny similarity but my listening involved lengthy comparisons to the dual-driver Phiaton PS200, Q-Jays, and ATH-CK90Pro as well as the Westone 1 and UM3X and the dynamic-driver-based Monster Turbine Pro Gold and Copper. As with the ATH-CK10, the bass of the DBA-02 is tight, controlled, and well-extended. I find the DBA-02 to be ruler-flat down to the lowest limits of my hearing, beating out the CK100 and a slew of other high-end earphones. The low end is quick and detailed. I do feel that the CK10 is just a hair more immediate in terms of impact and seems to move more air than the DBA-02 does. It should be noted that while I consider both earphones to be very well-balanced, for those used to something like the MTPG or Senn IE8 both will still fall square into ‘bass-light’ territory.

The midrange of the DBA-02 is balanced perfectly with the bass and treble. It isn’t lacking in transparency, clarity, or detail. If anything, it is a bit too crisp and aggressive when it comes to texturing – a bit Etymotic-like in that respect – but this is hardly a negative in my book. The mids of the CK10 sound slightly smoother and have a more liquid nature to them. Moving into the lower treble, the DBA-02 stays fairly smooth and quite articulated. There’s plenty of sparkle to go around but no harshness or sibilance. The DBA-02s are certainly bright earphones but the lower treble is less hot-tempered than that of the CK10s, which are just a tad more prone towards being sibilant. Treble detail is excellent but microdetail is presented with less authority than the somewhat more aggressive CK10 – a role reversal of sorts from the midrange, where the CK10 exhibits a more laid-back character than the DBA-02. Extension is effortless – a characteristic the DBA-02 shares with the CK10 and CK100.

When it comes to presentation, the DBA-02 once again surprises with the amount of air in its spacious stage as well as with the excellent (though not quite UM3X-excellent) instrumental separation. Soundstage width and depth are quite good, though neither the IE8 nor the Phiaton PS200 will feel threatened by the Fischers any time soon. In comparison, the CK10 sounds more enveloping and three-dimensional with better imaging and a capacity for front-to-rear positioning that never ceases to surprise me. The sound of the CK10 has a sort of ambience to it that I have not heard replicated except in the higher-end CK100. On a final comparative note, I feel that both the CK10 and DBA-02 are equally (in)efficient and will both run fine off of portable players and scale relatively well with added power.

Lastly, I want to emphasize that while direct comparisons always make it seem like the two products being compared are extremely dissimilar, the differences between the ATH-CK10 and DBA-02 are fairly small. For all intents and purposes, the two earphones share a general sound signature and I probably wouldn’t want to own both simultaneously.

Value (9.5/10) – The Brainwavz B2 offers nearly unprecedented bang/buck. Though the build quality isn’t fitting of a top-tier earphone, neither is the price, and that really sums up the earphones pretty well – top tier sound quality with middle rung amenities and price tag.