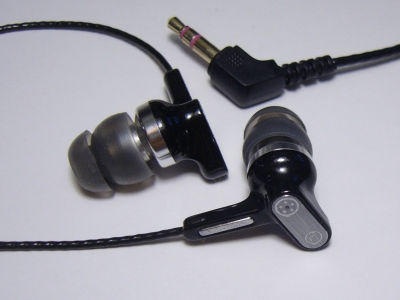 Accessories (4/5) – Single-flange silicone tips (3 sizes), shirt clip, and hard clamshell carrying case
Build Quality (4/5) – The shells used by the M3 are very similar to the ones used by the aging Music Valley SP1 with two major exceptions – a metal nozzle is used by the M3 in place of the SP1’s plastic one and the cable doesn’t feel like it will fall apart at any moment. There are still no soft strain reliefs but the thicker, sturdier cable should hold up well nonetheless
Isolation (2.5/5) – The odd housing shape of the M3 prevents it from being inserted deeply and the earphone is vented at the rear. The resulting isolation is average
Microphonics (4/5) – Low when worn cable-down, nonexistent cable-up
Comfort (3.5/5) – The plastic process on the side of the housing is meant to hook into the antitragus of the ear but for me it just digs into it painfully. Mercifully they can be worn over-the-ear with longer tips (the housings ‘arms’ will end up pointing outward) and are quite comfortable in that configuration

Sound (7.7/10) – The long-delayed flagship of mp4nation’s Brainwavz line bears a definite sonic resemblance to the lower-end models but leaves little doubt regarding its position in the lineup. Fitting issues aside, I have to admit that the M3 is a very pleasant earphone to use – balanced, poised, and non-fatiguing. The lack of any real sonic flaws is probably its greatest strength – whereas the M2 is a fairly colored earphone with forward mids and mediocre soundstage depth, the M3 manages to steer clear of the more polarizing sound signature elements of its sibling.

The bass of the M3 is very much to my liking – it is well-weighted and full-bodied but remains under control at all times in contrast to the M2, which can overemphasize mid-bass frequencies on occasion. The low end of the M3 is a bit more substantial than that of the M1 but retains the softer character and roundness of note, at least when compared to high-impact sets such as the Klipsch S4 or crisper, tighter earphones such as the Sunrise Xcape. Compared to the M2, the low end of the M3 is more extended and has a significantly smaller mid-bass hump, resulting in a more linear bass presentation. Those who found even the M2 to be bloated but aren’t willing to move to a ‘flat’ earphone such as the RE-ZERO or Xcape should be satisfied with response of the M3, which is quite natural without sounding lifeless or analytical. Reverb and decay are especially impressive and a fair tradeoff for the slightly relaxed bass.

The midrange of the M3 is warm and full. The reduced mid-bass intensity of the M3 means that the midrange of the M2 is warmer still but neither earphone makes the other sound ‘off’. The M2 does have the more forward midrange of the two earphones, which gives it more energy as well as some added ‘clarity’ in the vocal range – a good thing since the natural clarity of the M2/M3 isn’t quite on-level with the RE0 or Xcape. The M3 also lacks the texture and microdetail of the Xcape, both in the midrange and treble, but performs admirably next to more mainstream in-ears such as the Thinksound TS02. For the price its mids are undoubtedly competent, however, and the top-tier clarity of the Xcape bartered fairly for a more lush and liquid sound. One similarity that the M3 does share with the Xcape, for better or for worse, is the slight downward tilt in balance as opposed to the more treble-biased RE0 and RE-ZERO.

Expectedly, the treble of the M3 is deemphasized slightly in comparison to the bass and midrange. It is not absent entirely, however, and detail actually pops out better with the M3 than the M1 and M2. Extension, too, is better with the M3 despite the treble being completely inoffensive and non-fatiguing on the whole. As with the rest of the M3’s signature, the treble is very smooth but not as clear or crisp as that of the more treble-biased earphones out there. The RE-ZERO, for example, has significantly more sparkle at the top and even my FA Eterna comes out ahead for the type of treble response I personally find appealing.

Presentation, on the other hand, is a definite strength of the M3 and the one area where neither the M1 nor M2 can hold a candle to the flagship. From the very first listen, the M3 sounds ‘big’ – spacious, full-bodied, and quite realistic for an IEM. The soundstage of the M3 has pretty decent width and, unlike that of the M2, good depth. I do feel that the M1 carries more air due to the increased treble emphasis, but imaging and separation are still improved slightly with the M3. Tonally the M3 is not a far cry from the M2 but it is less colored on the whole. Like the M2, the M3 also doesn’t mind a bit of extra impedance and an amp, tightening up slightly and developing better resolution when matched with my 68Ω adapter and mini3. Obviously I still can’t recommend spending $20 on an adapter and $80 on an amp to get a touch more performance out of a $90 earphone but the potential is there despite the low impedance and high sensitivity of the earphones.

Value (8.5/10) – Being partial to the other Brainwavz/ViSang models, I expected to like the Brainwavz M3 but had reservations about its price tag and physical design. In a way, the M3 falls in line with my expectations – it is an earphone to be purchased purely for the sound. There is little doubt that the M3 is on the whole a better-sounding earphone than M2 and M1, but not necessarily better in every specific case. Despite their few flaws, the M1 and M2 are magical, musical, user-friendly and, best of all, reasonably cheap (by Head-Fi standards), and for the non-Head-Fi crowd, the gains made by the M3 may be too subtle to make up the price difference. In the context of this review, however, the M3 competes on a whole different level quite successfully and offers some of the purest audio enjoyment in its price class.

Pros: Lush, balanced, and spacious sound
Cons: Average isolation; cable-down fit may not work for some; bassheads and analytical listeners need not apply