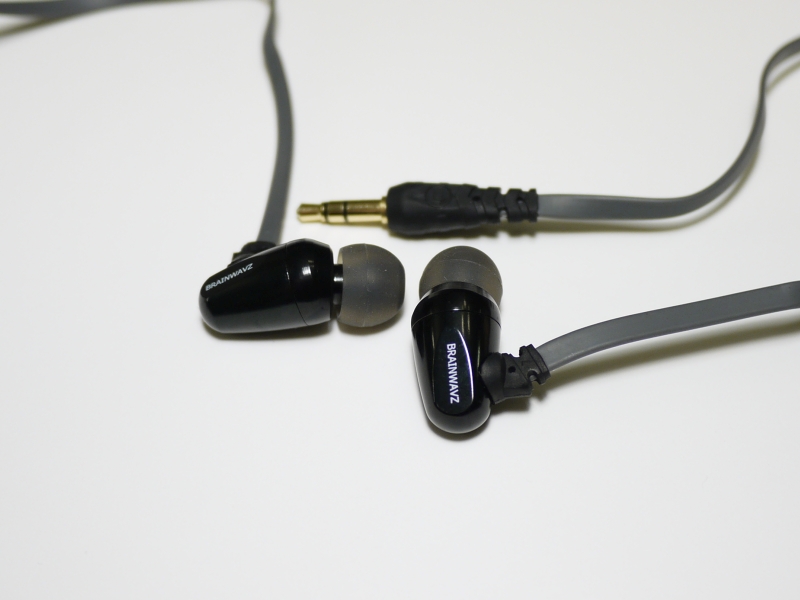 Brief: Brainwavz IEM slotting in above the S0 and S1 models

Accessories (4.5/5) – Black single-flange (3 sizes), double-flange, and triple-flange silicone tips, gray single-flange silicone tips (3 sizes), Comply T400 foam tips, 6.3mm adapter, and sturdy zippered carrying case
Build Quality (4/5) – The S5 is well-made, featuring metal housings with well-designed strain reliefs protecting its flat cable. The cable is rather long at ~4.3ft but resists tangling very well. Mild driver flex is present
Isolation (3.5/5) – Good, especially with deeper-sealing tips
Microphonics (4/5) – Good, especially with over-the-ear wear
Comfort (4/5) –  The S5 utilizes an angled-nozzle design, which keeps its large housings more flush in the ear when worn cable-up. What’s unusual is the angled strain relief, which makes it easier to route the flat cable over the ear (though those with small outer ears may still find this a struggle). With the right ear shape the S5 can be worn cable-down, too, which actually gave me a more secure fit

Sound (8/10) – I find it odd that the Brainwavz S5 is marketed as being well-balanced and accurate – in reality they are one of the most obviously v-shaped-sounding earphones this side of $100, not that that’s a bad thing. One of the few rules we have here at THL is to base our reviews solely on what we hear – not desires and expectations, not other reviews, and certainly not marketing materials and manufacturer claims – so Brainwavz being way off base regarding the sound tuning of their own earphones makes little difference.

In terms of audio performance, the S5 appears to be a successor to Brainwavz’ lower-end S1 model with an even more v-shaped sound tuning. That means more bass impact, brighter (and on occasion slightly harsher) highs, and a clearer, albeit slightly more recessed, midrange. On the whole, it is an excellent upgrade from the S1 and most other sub-$100 offerings for listeners who appreciate a heavily v-shaped sound.

While the bass of the S5 is heavily enhanced, the balance between sub-bass and mid-bass is pretty good and overall bass quality is surprisingly high. Together with the bright treble, this results in rather good clarity for a bass-heavy $100 IEM. Case in point – the S5 is not as veiled as the Xiaomi Hybrid earphones despite having significantly more bass impact. Likewise, it is bassier but also brighter and clearer than the Rock Jaw Alfa Genus.

This type of impactful, yet clear sound is not uncommon with earphones that are deeply v-shaped, and is what made certain Klipsch and JVC IEMs a hit with consumers in the past. However, comparing the S5 to a less colored earphone from a higher performance tier – the RHA MA750, for instance – makes its more sculpted sound tuning immediately noticeable. The MA750 is significantly more balanced, with neither the bass boost nor the bright treble of the S5. It is impressive that the much more bass-heavy S5 keeps up in clarity, but ultimately it is still significantly harsher and not as natural or as resolving as the MA750.

The fact remains, however, that the S5 is much brighter, clearer, and more detailed than most other bass-heavy earphones in the lower price brackets. For example the latest and greatest from JVC’s Xtreme Xplosives line, the XX Elation HA-FR100X, sounds very muffled, dull, and lacking in detail in comparison to the S5. The downside is some harshness, which tends to outpace more mildly v-shaped sets such as the Xiaomi Hybrid and Rock Jaw Alfa Genus.

Soundstaging is pretty good for a bass-heavy earphone and the S5 is surprisingly sensitive and efficient, which makes sense considering how friendly its sound tuning is towards the average consumer.

Below are several head-to-head comparisons between the Brainwavz S5 and other sets that either perform on a similar level or have somewhat analogous sound tuning, provided as additional context for the earphones’ performance.

While Brainwavz’ pricier S1 model sounds quite similar to the S5, the entry-level S0 follows a more neutral sound tuning that makes for an interesting contrast. The S0 doesn’t have the best bass impact and depth to start with, and compared to the very impactful S5 it sounds downright anemic at the low end. It also seriously lacks clarity in comparison to the higher-end model, resulting in sound that is both muffled and lacking in dynamics.

The S5 has a much more v-shaped sound signature. Its bass is more powerful by a wide margin, with tons more of both mid-bass impact and sub-bass rumble. Meanwhile, its treble is brighter, which helps with the detailing and makes the overall sound more lively and dynamic. Less forgiving, too, but that’s a small price to pay for the significantly better clarity and resolution.

The Pump Audio Earphones are one of the better bass-heavy sets in their price bracket, notable especially for their bass depth and slam. The S5 is not far behind in overall bass quantity – it doesn’t quite have the depth and power of the Pump, but is reasonably close. However, its sound tuning is much more v-shaped overall, with strong treble presence giving it a brighter, harsher, crisper sound compared to the Pump. The Pump has much smoother and more forgiving highs, which helps its bass stand out even more but also causes it to fall behind in overall clarity. It is mostly the clarity gap that makes the S5 more enjoyable for me despite the harshness.

The AD01 and S5 provide an interesting opportunity to compare two similarly-priced earphones that offer different “degrees” of v-shaped sound tuning. The AD01 follows a rather mild v-shape while the S5 is much more extreme, with heavily boosted bass and treble compared to the AD01. The AD01 sounds more balanced, smooth, and natural, while managing similar clarity to the S5 despite its significantly less treble-heavy sound.

The more v-shaped S5 ends up with much more recessed mids and a less natural tonal character, thanks largely to the poorer midrange-treble balance and harsher, grainier highs. On the upside, its sound tends to be more dynamic, lively, and exciting – the S5 is one earphone that no one will call “boring”, no matter what their reference point.

The SuperBuds are yet another ~$100 bass monster, offering more slam and impact than pretty much any other IEM on the market. What’s impressive is that the S5 can very nearly keep up in terms of bass punch while offering tighter, cleaner, more controlled lows. Compared to the rather smooth SuperBuds, the more v-shaped S5 sounds much brighter, clearer, and more detailed, though also harsher and more sibilant.

The SuperBuds are much warmer and lack the crispness of the Brainwavz unit while also having boomier, less controlled bass, resulting in a significantly more veiled and muddy sound. All in all, clarity is the dealbreaker here – the only time I can see someone being better off with the SuperBuds is if they’re either trying to maximize absolute bass output, prefer an extremely warm tonal character, or are extremely intolerant of brighter, harsher highs. In all other cases, the much clearer and more detailed S5 is a better earphone.

Value (7.5/10) – The Brainwavz S5 is an unapologetically bass-heavy, v-shaped earphone that makes me think back to the days of the Klipsch S4 and early JVC XX-series earphones. As with all things audio, this type of sound tuning is a give and take –  the S5 is very lively and engaging, and one of the best takes on a strongly bass- and treble-biased sound in the price range, but it will not appeal in the least to those who are not fans of v-shaped earphones. Still, with good build quality and a surprisingly comfortable fit, the S5 can make for a great listening experience and a worthwhile upgrade to some very popular sub-$100 sets.