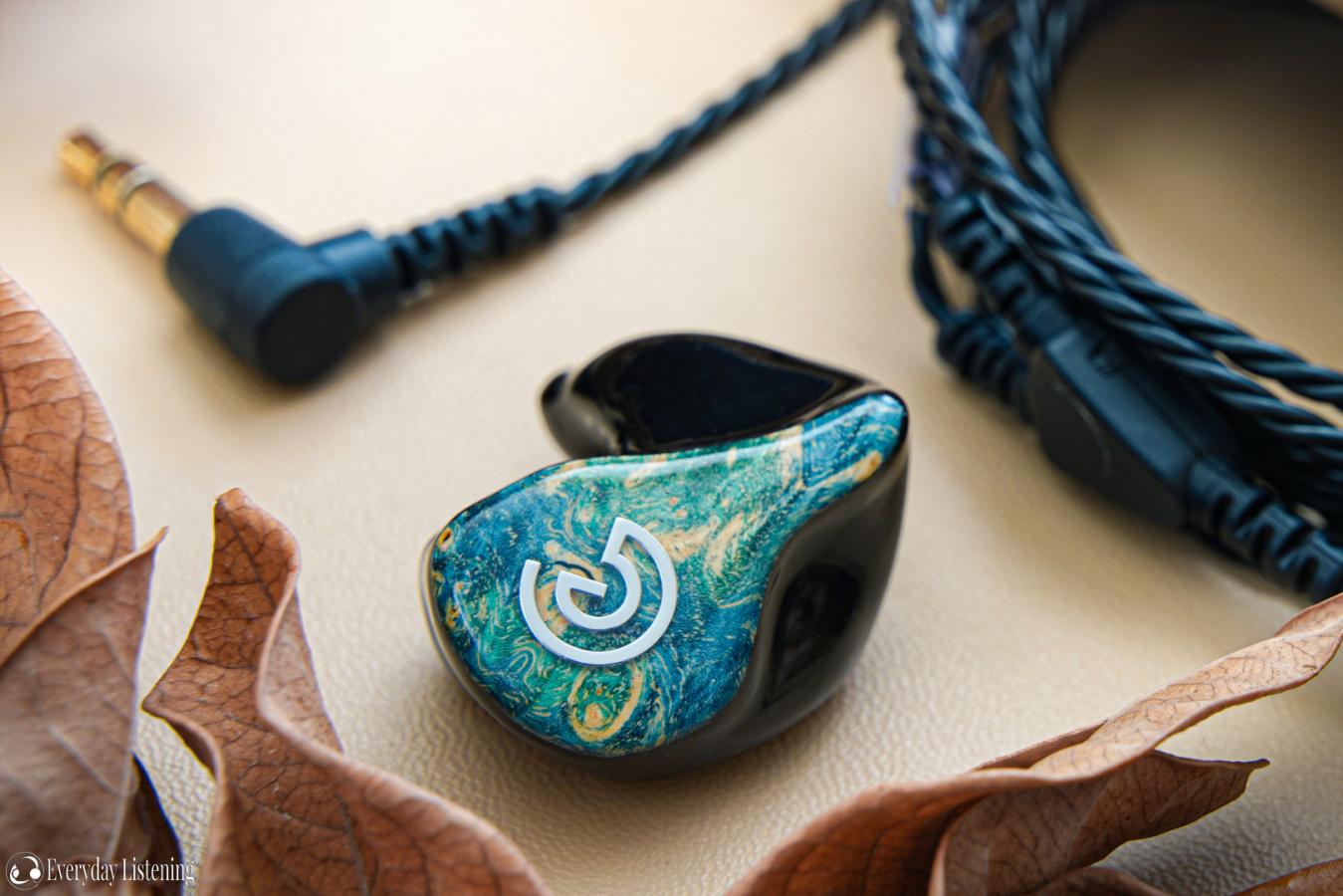 The Four is an earphone that tickles the ear with a signature that sounds euphonic and balanced. This is a musical sound, lightly warm through the low-end and slightly forward through the centre midrange, imbuing vocals with enhanced clarity and presence. Meanwhile, the high-end is defined by a 10KHz emphasis while upholding a background that finds a happy medium between openness and cleanliness. Under scrutiny, the Four delivers background detail and extension only found on high-end IEM’s, however, it does so subtly with a natural upper-treble and smooth but not detail deficient lower-treble.

Bass extension is terrific and the Four possesses natural decay that many BA earphones fall short off while retaining control and detail retrieval. Though sub-bass has slightly reduced quantity, the earphones possess great depth and solidity at the very bottom, delivering defined rumble and solid slam. Mid-bass has slight emphasis, instigating a warmer tone before a natural slope into a lower-midrange that’s just a hair recessed. As such, cleanliness is retained but bass has a notch of additional fullness and an intoxicating combination of range and balance.

Quality also impresses, control is high and decay is accurate. Their slightly fuller tuning promotes a slightly smoother texture so lows are natural and avoid becoming clinical. As bass is agile and without an iota of flab or bloat, fine details can still be easily discerned by the listener and mid-bass is highly defined. The Craft Four’s stronger extension ensures lows are never scarce regardless of track. Though dynamics are clearly limited by comparison to a good dynamic driver earphone, the low-end is surprisingly genre flexible due to its qualities and tuning. Bass may not captivate with its quantity, however, it is natural, versatile and provides a perfect foundation for the midrange.

It can be said that the Craft Four is all about vocals, it is simply outstanding in the way it balances tone, body and presence. As a result, timbre is excellent and this is showcased front with the centre midrange seeing moderate wide-band emphasis. As the bass is lightly warm, vocals are well-bodied yet they aren’t raspy or over-articulated as the lower-treble is attenuated. This enables the ability to retain 4KHz presence and the earphone possesses strong upper-midrange extension and openness as a result; a presentation reminiscent of the formidable Fibae 7. As this added foundational warmth is mitigated by a slightly attenuated lower midrange as opposed to upper-bass, vocals are clean throughout and though tone is slightly warm, body is dead neutral.

The upper-midrange imbues heavenly female vocal extension and openness alongside enabling high definition. Vocals are well-layered and clarity is excellent without a hint of over-articulation, thinness or rasp. Resultantly, vocals are never dry or uninspired and the culmination of these effects is a highly refined and musical midrange. The midrange is as smooth as gossamer, suiting lovers of any kind of vocal and an accurate timbre. Despite not being the most technically proficient earphones I’ve tried, the Craft Four is surely among the most musical and finely tuned.

Altogether, the Four is an earphone that is clear yet clean and refined with moderate brightness well counterbalanced by tasteful warmth and body. Lower-treble is attenuated which serves to slightly smooth percussion and attack while avoiding thinness. As quantity evens out around the middle-treble, there remains strong detail presence alongside very impressive detail retrieval. Instrument body is slightly thin due to this bias, however, the Craft Four is not a bright earphone overall as treble is less prominent than mids and bass, but it is an airy monitor with heaps of headroom and empahsized shimmer. Similarly, highs aren’t brittle as the middle-treble is well-controlled. This is no doubt aided by their linearity.

No peaks are to be observed (or heard), but a smooth fall and rise until 10KHz after which treble extends linearly into the highest registers. There isn’t an abundance of sparkle, rather, a slight roll-off at the very top and modest energy and micro-detail within this region. As a result, the background is clean which provides a strong distinction between layers and draws focus towards foreground details. Detail retrieval is especially impressive for a midrange earphone and the presentation showcases great refinement, however, though extension is admirable this surely won’t be mistaken for a flagship monitor as can be expected.

With such a treble performance and a very well-metered signature, the Craft Four provides an immersive soundstage. Width is great, extending beyond the head while depth is also able to project a fair distance on tracks with less prominent vocals. Similarly, imaging is accurate on behalf of their balanced tuning and layers are highly defined which helps the listener pinpoint fine details and directional cues. Separation also receives high marks due to their well-controlled low-end combined with defined layers and a focussed foreground detail presentation within the high-end. This isn’t the most holographic presentation but one with especially strong layering which helps to maintain organisation and focus in lieu of a slightly airy tuning that can be prone to sounding diffuse when ill-executed.

The Craft 4 has unspecified sensitivity and a very low 10-ohm impedance. The earphone also features a down-falling impedance which mitigates hiss but also, I’m told, makes the earphone scale better with high-end sources at the cost of being more fickle when power and output impedance aren’t ideal. It is a sensitive monitor to my ears, slightly less so than the very efficient Andromeda, so output impedance is of more concern for prospective buyers. And indeed, hiss is barely or not perceptible on all of my dedicated sources which works to the benefit of micro-detail retrieval. Select pairings below.

Pixel 4: Noticeably warmer and less-controlled bass, resulting in a loss of definition. Fairly similar midrange, vocals are slightly fuller and more laid-back. Highs are smoother and lose some extension. The soundstage is wide but layers are less obvious than dedicated sources. Zero hiss.

Oriveti OH500 ($499): The OH500 provides a more vivid, W-shaped sound but possesses similar balance overall. Bass has greater depth and more sub-bass emphasis, delivering more visceral rumble and slam. The OH500 has similar mid-bass quantity similarly delivering a light warmth while implementing a sharper upper-bass drop yielding a slightly more neutral low-end tone overall. The Craft 4 is more controlled, noticeably quicker decaying and more defined while the OH500 is cleaner and more dynamic. The Craft 4 has a smoother midrange, it is more linear and less vocal biased. It is slightly warmer where the OH500 is clearer and more forward but also slightly shoutier within the upper-midrange.

Both are very clean and refined as a result of well-metered tone, balance and recessed lower-treble that reduces thinness and rasp. Up top, both have a similar presentation, biased towards the middle treble. The Craft 4 has slightly more detail retrieval in the foreground in addition to more accurate treble instrument body. The OH500 has a touch more air and a slightly brighter background. Both extend very well for this price class, the Craft 4 has more separation and sparkle, micro-details are more apparent due to its cleaner background. The OH500 has a slightly wider soundstage while the Craft 4 is more rounded with sharper imaging and more defined layers.

Custom Art Fibae 2 ($525): A slightly cheaper and older model from Custom Art, but one that has the closest sound signature. I think Piotr has made huge strides with his new designs, unfortunately, I did not have any on hand besides the much pricier Fibae 7. The Fibae 2 is brighter, more vocal-forward and more aggressive in the lower-treble. The Fibae 2 has a similarly tuned low-end with just slightly more warmth. Extension is clearly better on the Craft Four as is separation. The Fibae 2 has a smoother texture and less control. Through the midrange, the Fibae 2 is less linear and more forward. Vocals possess more clarity and avoid over-articulation due to a sharp upper-midrange dip. As such, extension is reduced.

However, this is not so apparent due to the Fibae 2’s prominent centre midrange push. The Fibae 2 has a more tonally neutral midrange due to its more recessed lower-midrange but it has more body due to the increased upper-bass presence and added density. As such, it is not as revealing as the CE4 nor as natural due to reduced linearity though clarity and vocal presence are both high. The Fibae 2 has a touch more lower-treble aggression and a small middle-treble bump for air. The Craft Four is more refined and linear here, smoother in the foreground but with superior detail retrieval and more accurate instrument body. The Craft Four has more extension and headroom, both have similar stage width, the Craft Four has more defined layers and more accurate imaging.

Audiofly AF1120 Mk2 ($699): The AF1120 MK2 is more linear yet with a similar treble tuning. It has more sub-bass emphasis and slightly more mid-bass but also less extension which prevents it from sounding explicitly bassy. The AF1120 sustains emphasis further into the upper-bass making it warmer and fuller with bolder notes. Meanwhile, the Craft 4 is quicker decaying and more controlled, possessing greater definition and detail retrieval. The AF1120 has a fuller and more forward midrange stemming from its greater upper-bass presence combined with a more recessed lower-midrange.

It is similarly clear and well-extended but has noticeably more upper-midrange bias. Both represent accurate timbre, the Craft Four being cleaner and more defined, the Af1120 being even smoother. Both possess recessed lower-treble serving to mitigate sibilance and rasp. They both also feature a small uptick of presence through the middle-treble though the Craft Four has the airier, more linearly extended top-end. It has more detail retrieval and sounds slightly crisper with greater foreground detail retrieval. The Craft Four has a larger soundstage, especially width, both are very well-layered.

Campfire Audio Andromeda ($1099): Though more expensive, the Andro represents a benchmark and is more comparable to the CE4 when compared to the substantially more V-shaped but more similarly priced Polaris II. It is more U-shaped with a more vivid tuning. Sub-bass extension is slightly better on the Andro, it has more presence throughout, especially in the upper-bass, granting it a warmer tone. The Andro has a smoother texture and sizably more mid-bass punch, while the Craft Four has a cleaner low-end with more definition through the mid-bass and slightly quicker decay. The Craft Four has a cleaner midrange with more vocal presence where the Andro is slightly more engaging with its warmer and more laid-back vocals.

Craft Ears may be a relative newcomer, however, they demonstrate great proficiency with their first wave of earphones. It remains marvellous how new technologies have enabled enthusiasts to join the craft alongside industrial juggernauts. The Four showcases great promise both from a technical and tonality standpoint. End to end extension is impressive and the sound provides an immense combination of balance and tone. This is easily one of the most ear-pleasing 4-driver BA earphones I’ve come across and, at just over $600 USD, it represents excellent value, especially when combined with immaculate, personalized build quality. The Craft Four is best suited for those wanting a balanced, musical earphone with smooth, prominent vocals and airy highs. High recommendation!

The Craft Four can be purchased from Craft Ears for 550 Euros. I am not affiliated with Craft Ears and receive no earnings from purchases through this link.