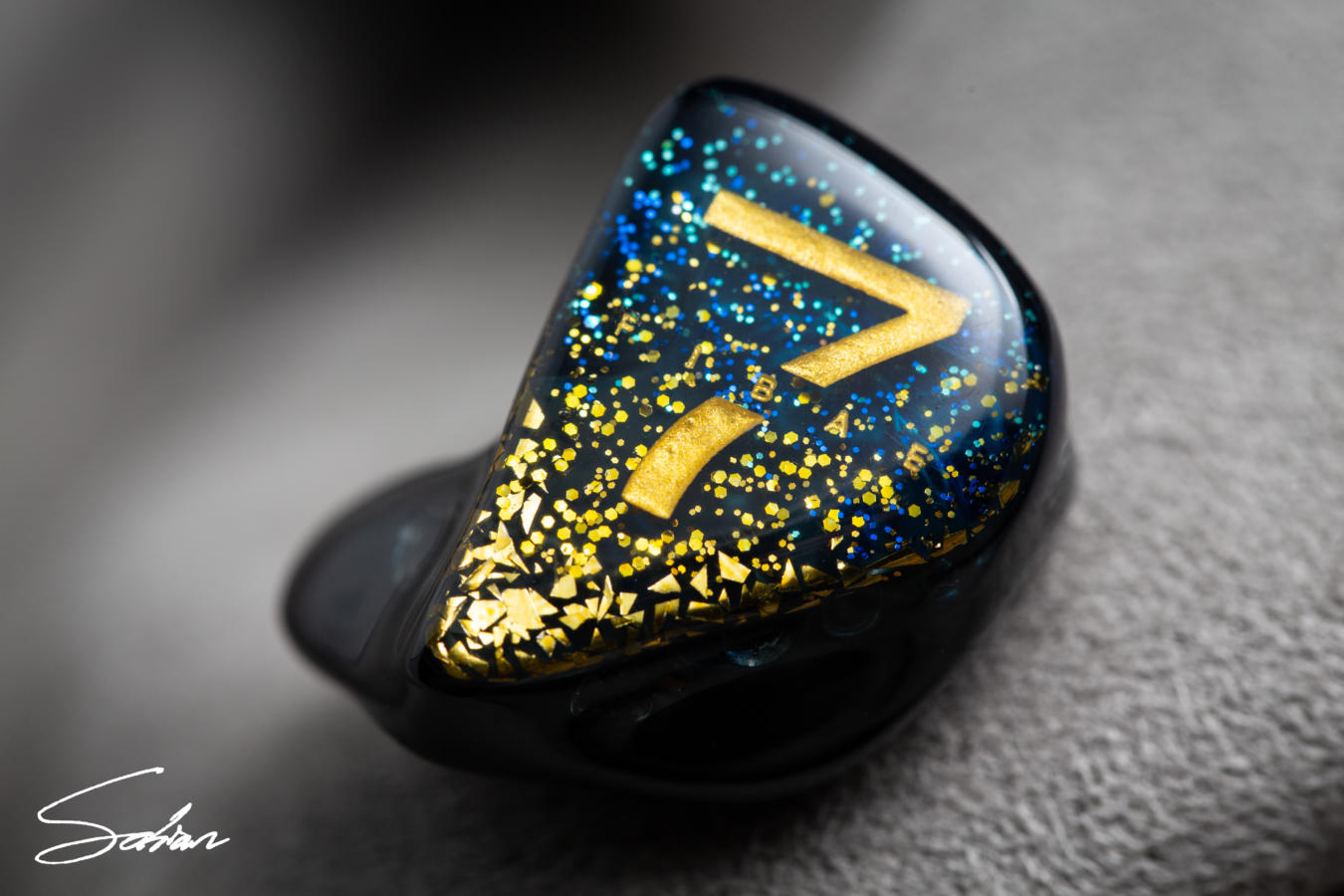 Custom Art’s FIBAE 7 tempers lush and reference; a balanced, unexaggerated-sounding monitor with hints of warmth and intimacy littered throughout the soundscape. Instruments largely come across natural and well-rounded; uncoloured by a decent margin. But, those organic touches are certainly here as well, courtesy of the in-ear’s softened middle-treble, as well as its rich, saturated upper-midrange. Instruments don’t sound as sharp as they would when neutral, and they aren’t as dry either. It’s like if you took a perfectly raw, correct image and added a hair of vignette and saturation. It’s got analog or vintage studio written all over this tonality, and I think that truly is its greatest asset; an old soul with today’s technique.

That is when the monitor’s spatial qualities come in. In line with what I’ve described above, the FIBAE 7 has that near-field sound, where instruments span a hair larger and overlap each other a teensy bit. Positionally, they’re more intimate than concert-like; just a tad out-of-head. But, what the FIBAE 7’s truly got going for it is tidiness, cleanliness and linearity. Each note sounds like they’re on the same page; assuming a uniform colour and texture, and appearing and disappearing at a similar pace. So, despite those richer notes not having the sharpest of outlines – again, courtesy of those lightly-subdued highs – every passage nevertheless comes off tight and clean. It makes music really easy to follow and details, therefore, much easier to take in. It’s a monitor that takes pride in being straightforward, but one with subtle nudges for colour too.

The FIBAE 7’s bottom-end is perhaps its least noteworthy trait; not due to a lack of quality, but because of its designated, supporting role. It isn’t the boisterous or bombastic kind that smacks you in the chest with thump. Its job is more so to fill in gaps in the space with light touches of warmth, and it does so brilliantly. Instruments like the saxophone come off rich and supported, and the same applies to pianos, guitars, etc. It’s because it’s more of a melodic bass as well, courtesy of a tilt towards its mid-bass, rather than the sub-bass. It’s got a fatter, smokier profile, instead of the guttural, rumble-happy, skull-rattling kind that seems to be the trend. So, that’s worth taking note of if you prefer your lows a certain type of way.

Timbre is where I think the FIBAE 7’s lows shine brightest. Again, it has that smoky signature to it, which I find particularly lovely on jazz or latin kicks. Listening to Chick Corea’s Armando’s Rhumba or Nathan East’s rendition of Love’s Holiday, that slower, warmer decay reinforces the vintage sound I discussed in Presentation and truly sells the vibe of those records to a T. Rather than a rhythmic pulse, this bass plays more like a melodic instrument, which fits those genres of music rather aptly. With that said, it’s not short of versatility either. With pop or rock tracks, the bass has more than enough extension to pump those genres forward. Again, its role is more foundational, but this is all you need sometimes. So, if bass is your main thing, the FIBAE 4 will probably be a more ideal IEM. But, for a bass that sets up the mids to be the star, the 7’s is it.

This midrange, to me, is the true lynchpin to the FIBAE 7’s signature. As has been alluded in the prior passages, there’s a bigness and vibrance to this in-ear’s instruments, and it really comes from its vivid, forwardly-positioned, clear-sounding mids. Whether it’s pianos, trumpets or lead guitar, there’s a transparency and straightforwardness to how they’re voiced that breeds intimacy and emotion on ballads like Shaun Martin’s The Yellow Jacket or DeAndre’s Love Was The Excuse. And, most impressively, all I can attribute it to is how linearly and completely it’s been put together; no tight, low-mid cuts, no upper-treble shimmer; nothing. All it is is an even representation of the midrange with just enough warmth, density and presence, and the result comes off natural and correct. Topping it off is the midrange’s strong dynamics as well, capably shifting from quiet to loud and timid to grand in an accurate, musical way befitting of one proper flagship in-ear monitor.

Breaking down the lyrical of it, the biggest contributing factors to these mids – aside from the smoothness of the tonality – is the relationship it has with the extremes. Following its even, uncut lower-midrange is a 1-3kHz rise, which I’ve always found natural and life-like; supporting instruments with a chesty foundation, rather than truncating that for air or space. And, it’s positioned somewhere between in-line with and in front of the lows and highs, which lend lead instruments their rightful position at centre-stage. That isn’t without its shortcomings. Those craving a soundscape where instruments line the outer rim of the space can find this a bit too up-close. Fans of dynamic, crisp percussion may find snares or congas a tad too harmonic too. And, those accustomed to a recessed upper-midrange can find vocals a tad nasally; brassy. But, if you like your mids presented in full, yet still with a daft, refined, precise touch, the FIBAE 7 is Piotr’s most ideal in-ear yet.

In true Custom Art fashion, the FIBAE 7’s highs play second-fiddle to the midrange, somewhat. Transients tend to sit a tad behind the body or the harmonic. With snare drums, you’ll hear more of a thud or thwack than crack. Then, with stringed instruments, like the violin, you’ll get the note ringing off its body more than you’ll feel the friction of the bow against the strings. With male and female vocals, this means sibilants and plosives won’t pop quite like they would with a brighter in-ear. At times, that may blunt the bite of certain lyrics. With boom-bap styles of hip-hop, like Royce da 5’9”’s God Speed, for example, the lines don’t hit with quite as much oomph. The beat could use a bit more air too. At the same time, though, it can also prevent hotly-mastered material from becoming too abrasive. So, it’ll depend on what you’re listening to as well.

This comes from the FIBAE 7’s mid-treble dip around 8-10kHz. It rounds transients and takes out some of those rougher, crisper notes. That’s not to say they’re soft or diffuse either, though. The IEM draws articulation from about 6kHz, which lends it a nicely bright tick. Hi-hats have plenty of cut; they just won’t have that sharp a bite or too hard an edge. Fans of the 64 Audio, AAW or qdc house sound may find it a tad shy. But, what I find endearing about these highs is – again – the clear, complete, rounded tone. Listening to the ride cymbal – whether struck on Oz Noy’s Boom, Boo, Boom, or kissed on Jesse Ryan’s Big Ole’ Shoes – is massively gratifying; clear, lightly warm and pizzazz-free. Then, up most high, the FIBAE 7 extends well. It, again, isn’t the roomiest flagship. It’s a bit short on headroom or dynamic range to trade blows with the $3000 top dogs. But, as far as its job here, it does all asked of it to a T; clear and earnest; never guilty of doing too much.

This FIBAE 7 embodies that Custom Art sound more than any of Piotr’s previous monitors. And, it’s the one with the most balance to it too. With its brand of reference, here are three of its standout traits and why it could be the flagship for you:

A balanced, mostly-unexaggerated, near-field-monitor-like sig: That’s probably the way I’d most succinctly describe the IEM’s sound. It’s a balanced tone with minimal emphases or colourations, but presented in a way that’s perhaps more intimate than most would expect. Instruments also sport bigness to them, which isn’t common with far-field monitors. So, a near-field set-up is what I’d liken it to, and it’s a superb substitute if those are what you’re used to working with or listening to.

Bold, musical vocals within a clean, refined setting: Another hallmark of this FIBAE 7 is its mix of a lifted high-midrange with a well-organised stage. Vocals, though intimate and full-bodied, aren’t overtly lush, buttery or rich. Clean air flows freely between them, which is ideal if you want big-sounding keys or guitars without them overlapping or congesting the stage.

Organically-presented, un-clinical-sounding notes with finesse: Again, a hallmark of Custom Art’s house sound, this FIBAE 7’s transients are on the smoother, gentler side. Though, because of this in-ear’s great treble extension, it’s capable of more clarity and articulation than these sorts of colourations may typically provide. So, if you find most flagships nowadays on the brighter, more fatiguing side, the FIBAE 7 is a great alternative that doesn’t lag far behind in fidelity at the same time.

At the same time, this FIBAE 7’s less-exaggerated response and gentler touch won’t particularly be ideal for those after a more explosive, harder-edged signature. So, this may not be the flagship for you, if you’re looking for the qualities below:

Distant, tight, sharply-outlined instruments: This FIBAE 7’s presentation inherently leans to the larger, more intimate, more immersive side. Instruments are positioned further upfront with the slightest hints of overlap. So, if you typically prefer your notes compact and lining the periphery of the soundscape, you may want to consider Custom Art’s FIBAE 4 instead.

A guttural, chest-thumping low-end: Melody and tonality are the two attributes I’d remember the FIBAE 7’s low-end by. It’s more of a sing-song-y presentation with that lighter, balanced-armature timbre. As a result, bassheads may find it timid, especially when it comes to verve. Custom Art’s FIBAE 6 or their Project 4+2 collaboration with AAW are more ideal here.

Ultra-crisp, airy highs: On the other extreme, this FIBAE 7’s higher-end is on the more reserved side as well; preferring to portray a cymbal’s tone accurately, rather than sizzle or bite. Their FIBAE 3 could be the pick if you’re after clarity and air.