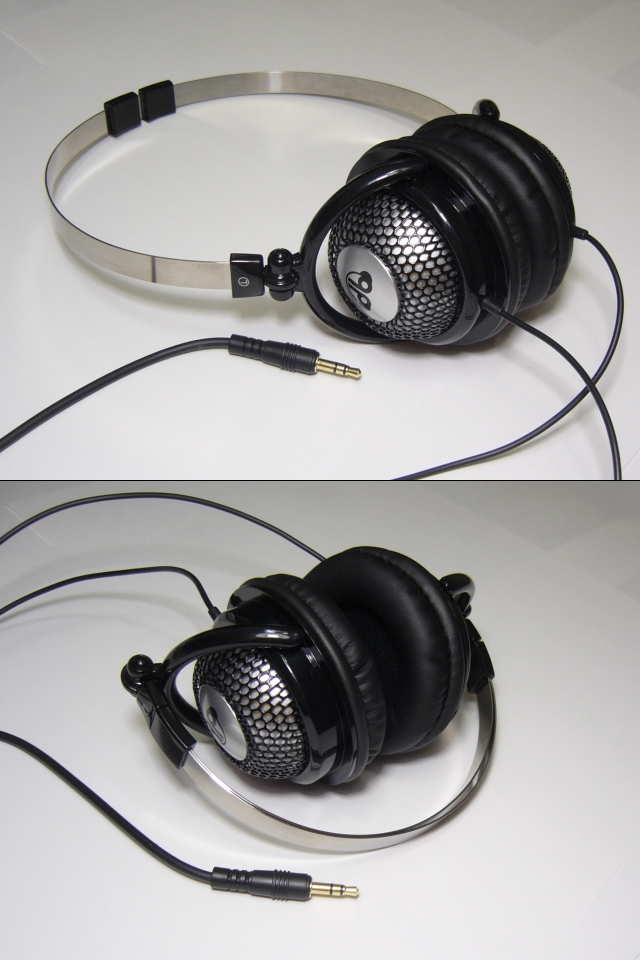 Brief: Entry-level supraaural equipped with a proprietary volume limiter for the hearing safety of kids and adults alike

Build Quality (6.5/10): Despite looking sizeable in photos, the HP-100 is a rather small headphone with collapsible cups and a three-piece (a-la Koss PortaPro) retractable headband. Though the headphones are closed, the cups are covered with a painted metal mesh and feel quite sturdy. The glossy plastics of the folding structure aren’t quite as thick as those used on the AKG K430 but still quite decent. The metal headband is similar to that found on the Koss PortaPros and the soft and supple dual-entry cable is impressively thick below the y-split.

Comfort (7.5/10): The auto-adjusting headband of the HP-100 has the same issue as that of the Koss PortaPro – hair tends to get caught in it. Other than that the design is quite comfortable for a small headphone. The padding of the semi-spherical cups is adequate and the cups have a wide range of motion. Clamping force is a bit higher than average but gets spread out evenly along the pads and the headphones remain comfortable for hours at a time.

Isolation (7.5/10): The closed cups, compliant fit, and tight clamp of the HP-100 all make for a well-isolating little headphone. Leakage is nonexistent and the passive isolation is easily good enough for music enjoyment on above-ground public transport.

Sound (6/10): The main selling point of dB Logic’s headphones and earphones is the proprietary volume-limiting circuitry (dubbed Sound Pressure Level Limiting, or SPL2), which is intended to maintain safe volume levels at all times. Though the company won’t reveal the underpinning principle of the technology, the intended result is clear – distortion-free damping of the output when the input power becomes high enough to produce an SPL dangerous for the human ear. To test this claim I performed an experiment on the HP-100 similar to the way I tested the EP-100 earphone in the multi-IEM review thread. First, the low-volume output of the headphones was matched by ear (with SPL meter verification) to a variable-impedance set – in this case an AKG K430 – at a relative volume of 10 on my Fiio E7. From there I donned the K430 and increased the volume until my ears started bleeding (so to speak). Next came the HP-100. I found the dB Logics to increase in output volume much more slowly than the K430 with a matching starting point. Unlike the EP-100 earphones, the HP-100 never hit a dead-stop limiter but even at maximum volume the output SPL was tolerable. As far as I can tell, feeding extraordinary amounts of power to the HP-100 introduced no clipping or distortion to the signal. Yes, it is possible to drive the HP-100 hearing damage-inducing volume levels, but it will take a lot more effort than with any other headphone.

Sound-wise the HP-100 takes the same approach as the EP-100 IEM, doing its utmost to avoid offending with its signature. The bass is surprisingly deep and a moderate mid-bass hump gives the low end some warmth. It is not the tightest low end, nor is it the quickest, but gives tracks a pleasant low-end rumble. Impact is slightly softened compared to hard-and-fast sets such as the Sennheiser HD25-1 but pleasant on the whole. On the other hand the muddy ‘boom’ of sets like the ATH-FC700 is missing as well and the bass doesn’t bleed up into the lower mids. The midrange itself is smooth and warm, not forward but not particularly recessed. The leaner-sounding Meelec HT-21 is both clearer and crisper but lacks the full-bodied lushness of the HP-100. The Maxell DHP-II is more similar in the midrange but has more bass, causing the mids to sound more distant compared to the HP-100. The treble, similarly, is smooth and inoffensive. The sparkle of the HT-21 is missing but so are any and all treble spikes. Indeed, the treble of the HP-100 takes a half-step back compared to the midrange and stays out of the way when it isn’t called on. Extension is so-so but no worse than the ever-popular Koss PortaPro and other headphones that emphasize lower half of the spectrum. Avoiding listening fatigue seems to have been the goal with the signature of the HP-100.

The presentation of the headphones is coherent and likable. The soundstage is average-sized and there is a better sense of expanse than with the AKG K430. Layering and separation are adequate for a closed headphone at the price point but the usual trade-off with isolation applies. Those looking for a limitless soundstage will likely be better off with an open set. A last point to note – though the SPL-limiting HP-100 is not lacking in sensitivity, it suppresses hiss better than anything else in my portable collection. If I had to pick a set for an application with a noisy source, it would be the HP-100.

Value (8/10): Like dB Logic’s EP-100 IEM, the HP-100 provides a likable sound signature in a convenient and handsome form factor. The SPL2 volume-limiting circuitry is functional but at the same time quite transparent to the user. The relatively high isolation of the headphones adds to their attractiveness as a total package – for those who do not require their headphones to be capable of reaching 100dB SPL, the HP-100 could really be quite a good match.