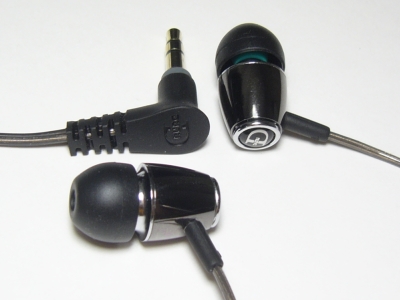 Accessories (5/5) – Single-flange (3 sizes), bi-flange, and Hybrid-style (4 pairs in 3 sizes) silicone tips, airline adapter, ¼” adapter, shirt clip, cleaning cloth, soft pleather carrying pouch, zippered clamshell carrying case, and integrated cable wrap
Build Quality (4.5/5) – The new Dunu earphones continue to amaze with their build quality – solid metal housings boast excellent fit and finish and the new silver cables are terminated by a heavy-duty L-plug. Proper strain relief is present all around. The cable itself is softer and more supple than previous cords but the sheath is somewhat sticky and tangle-prone
Isolation (3/5) – Good, somewhat limited by the shallow insertion depth
Microphonics (3.5/5) – Bothersome when worn cable-down; not an issue otherwise
Comfort (3.5/5) – The housings are moderately large and on the heavy side. Nozzles are stepped to allow for a deeper insertion but the front edges are wide, sharp, and potentially problematic for those with smaller ears

Sound (6.9/10) – Dunu’s DN-18 Hawkeye is the closed-back sibling of the DN-17 Crater. Unsurprisingly, the two earphones are very similar in overall performance,/strong with the Hawkeye’s being a compromise between the uniquely vocal-centric sound of the Crater and the more consumer-oriented sound of Dunu’s previous dynamic-driver models. While the bass of the Crater is nice and punchy, the Hawkeye offers better depth and more rumble, as well as a touch more impact overall. Note presentation is still a bit soft, resulting in a slight lack of crispness, texture, and resolution, but the greater bass quantity of the Hawkeye makes this less unusual.

The midrange of the Hawkeye, like that of the Crater, is forward and full-sounding. There is more warmth as a result of slightly greater bass bleed but on the whole the bass-midrange balance of the Hawkeye is more even. Detail levels and clarity are average at best but the Hawkeye seems to be a bit more resolving and a touch more crisp, especially when things get busy. There is less upper midrange emphasis with the Hawkeye, though the top end is just as laid-back overall as it is with the Crater. Treble extension is decent but there just isn’t much crispness or sparkle to the top end, resulting in a lack of energy and realism.

The presentation of the Hawkeye, too, is similar to that of the Crater, which is actually more impressive coming from its sealed-back form factor. The soundstage is still rather large and never congested, though the Crater has a touch more air and space. The Hawkeye still sounds ‘bigger’ than the DN-16 Hephaes and most other sealed IEMs, especially those normally found at its price point. Like the Crater, it is also oddly predisposed towards picking up electrical noise – a potential annoyance with sub-par sources such as laptops.

An updated version of the Hawkeye has replaced the one I originally reviewed. As with the Crater, the new tuning strives for a more balanced sound, though the changes are not as drastic with the Hawkeye. While I originally preferred the Hawkeye to the pricier, vented Crater model, it has undergone less dramatic improvement with the revision and the tables have turned.

The bass of the new Hawkeye is noticeably tighter but also gives up some of the impact of the original tuning. With this latest revision, the Crater is the bassier of the two earphones, though the Hawkeye still has slightly better extension. Clarity is improved slightly next to the original tuning and the overall sound is more refined and natural. The difference is slight, however – compared to the new Crater the Hawkeye still falls short in detail resolution. It does have smoother and more forgiving treble but at the expense of some of the air and clarity.

All in all, the Hawkeye is now the more mid-centric earphone while the Crater emphasizes the bass and treble more for a more balanced overall signature. This means that there is more room for both sets in the lineup but also makes it easy for me to recommend the Crater as the better choice for most genres.

Value (7/10) – The Dunu DN-18 Hawkeye provides spacious, mid-forward sound with enhanced bass punch and a warmer tone. With excellent build quality and well thought-out accessory pack, the DN-18 is a great earphone for those interested in rock-solid build quality with a sound signature focused mostly on the bass and midrange for not very much money.