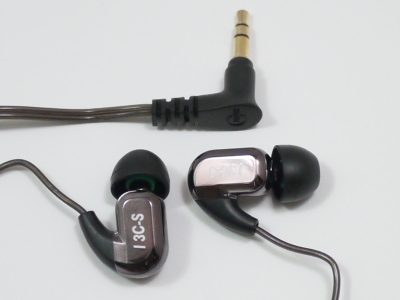 Accessories (5/5) – Single-flange standard (3 sizes), Hybrid-style (4 pairs in 3 sizes) and bi-flange silicone tips, shirt clip, cable guides, ¼” adapter, airline adapter, impedance adapter, cleaning cloth, drawstring carrying pouch, and crushproof metal carrying case
Build Quality (4/5) – The construction of the I 3C-S doesn’t feel as heavy-duty as that of the other Dunu earphones but is still above average. In contrast to other Dunu models, the housings of the I 3C-S are made out of lightweight plastic and the cables are only average in thickness. In addition, the strain reliefs are too hard for my liking and the nozzle filters come off too easily. The L-plug is well-relieved, however, and the cable features all of the usual Dunu enhancements including sliding cinch and integrated cable wrap
Isolation (3/5) – The housings seem to favor a relatively shallow insertion. Isolation is average for a BA-based earphone.
Microphonics (4.5/5) – Very little cable noise is present
Comfort (4/5) – The housings are lightweight and comfortable but on the large side for a single BA. Also, while I like the wide tip selection in theory, some of the eartips provided with the I 3C-S didn’t stay on the nozzles well enough for my liking

Sound (8.1/10) – Dunu’s first proper armature-based earphone, the I 3C-S is a mid-centric affair with sound characteristics typical of a mid-tier single-armature setup. Dunu includes an impedance adapter with the I 3C-S for a reason – the earphones benefit from the extra impedance, and not only because the output impedance of a source can interact with the low impedance of the earphones. Even with my Fiio E7, which has notably low output impedance, the I 3C-S sounds better when the adapter is used. The bass response is better in quality, appearing tighter and flatter, and the overall balance is improved with slightly brighter, better-defined treble and less dominant mids.

In general, the sound of the I 3C-S is hardly unique in the world of single-driver monitors. The bass is quick and clean, with mild deep bass roll-off. As expected, it can appear a touch lean next to many dynamic-driver monitors, including Dunu’s own DN-19 Tai Chi, but lacks some crispness and definition next to more analytical armature-based sets such as the MEElec A161P (Fischer SBA-03) and the dual-BA Rock-It Sounds R-50. Tonally, the I 3C-S is very slightly warm – warmer, for example, than the HiFiMan RE-ZERO but not quite as warm as the bassier Rock-It Sounds R-30.

The midrange of the Dunus is clean-sounding and very prominent. The I 3C-S is a mid-centric earphone but the mids are not pushed forward as much as with the Rock-It R-30, resulting in better overall balance (better still when the impedance adapter is used). Detail levels are good and the background is darker compared to the R-30, with the I 3C-S sounding clearer and more transparent. It’s clearer, more forward, and more intelligible also than Dunu’s DN-19 model, which sounds veiled in comparison. Note thickness is rather good for a single BA.

At the top, the I 3C-S remains clean and resolving. It sounds smooth, but is still more revealing than the Rock-It single-armature earphones, making both the R-20 and R-30 sound smoothed-over and lacking in refinement. The I 3C-S is still rather light on treble sparkle and less extended at the top than the HiFiMan RE-ZERO and MEElec A161P, but also not as grainy as the latter. The presentation is wide with good instrument separation. The I 3C-S is more spacious compared to the Rock-It R-30, though it can sound rather intimate with some tracks due to the forward midrange.

Value (8/10) – The Dunu I 3C-S is more unique in name than design, with clean if slightly mid-centric sonic performance delivered by a single balanced armature driver. There’s quite a bit of competition among armature-based earphones at and below its price point, however, and while it is one of the better single BA tunings I’ve heard, the I 3C-S has trouble pulling itself above similarly-priced dual-armature designs. All in all, the earphones do make for a well-rounded, non-fatiguing introduction to BA sound and are redeemed as a total package by a well thought-out accessory kit, good build quality, and the lightweight, over-the-ear design.