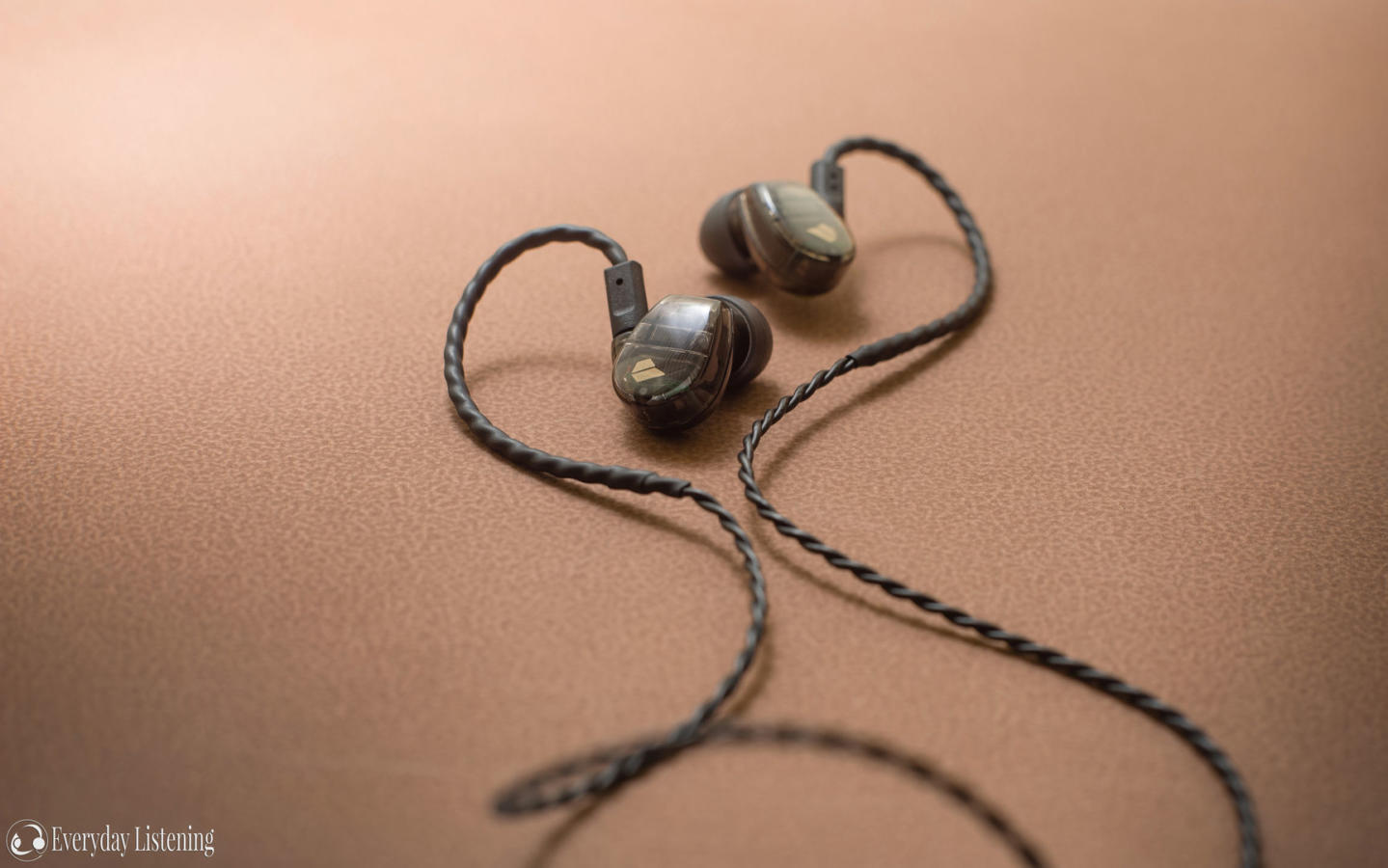 The EN210 has a sound rooted in a foundation of body that contrasts to the more atmospheric, treble focussed tuning most dual BA earphones pursue. Instead, the EN210 is reasonably dark and full though it remains nicely balanced overall; its darkness mainly derived from attenuated middle treble and upper midrange. Still, those looking for a clear, revealing and airy sound will want to look more towards the TFZ, iBasso and Fiio earphones.

Sub-bass is lightly elevated and extends nicely, providing greater solidity and impact than competing armature models such as the Rose Mini 2. Dynamic driver rivals still offer greater physicality, however, the EN210 is impressively substantial for a BA earphone in this regard, especially for the pirce. This is followed up with a modestly lifted mid-bass that grants the earphone with a full bass presentation and a warmer tone. It’s not over-cooked but can sound a little thick at times, and the EN210 is generally characterised by its weighted yet surprisingly dynamic bass notes. Some may have qualm with its emphasized upper-bass that fills its sound with warm air, creating an organic sound but also one that isn’t especially transparent.

The EN210 decays quite naturally, contributing to its dynamic and textured low-end, yet it maintains the sense of pace more typical to BA drivers. Still, they aren’t on the fastest transducers and some bloat does seep in-between notes on more complex tracks, producing some congestion. Control is impressive, however, especially given its fuller tuning. So though the EN210 isn’t a surgical IEM, it does uphold a pleasing level of bass detail, finding a nice middle ground between the better entry-level dynamic and BA offerings around this price. Resultantly, the EN210 provides a meaty low-end with impressive dynamics and texture at the cost of transparency and micro-detail retrieval.

Distinctly dark and smooth in nature, the EN210’s midrange is dense over warm. In particular, lower-mids are well-considered given the EN210’s bigger bass, with slight attenuation accentuating bass/midrange separation and reducing colouration. In turn, the EN210’s midrange isn’t especially thick though it is lightly warm and though it is full-bodied, the EN210 lacks the chestiness of IEMs such as the Magaosi K3 HD. Centre mids are slightly forward, bolstering vocal presence and imbuing them with a more natural body. On the flipside, as its upper-midrange is slightly attenuated, the EN210 provides a smooth, dense vocal reconstruction.

It isn’t an especially clear or revealing earphone as a result, though its interesting tuning results in a very clean, composed presentation that lacks any fatigue. Of course, this isn’t an in-ear for those looking for huge micro-detail retrieval or crisp instrumentation. Rather, it’s natural with gradual emphasis and pleasing balance and timbre. Clarity remains very palatable, not exceptional but easily avoiding veil, and the EN210 is accurately articulated on behalf of its treble tuning. It’s nicely detailed and remains resolving despite its more laid-back presentation of finer nuances but can take adjustment coming from other budget earphones that tend to be more vivid.

The EN210 has a rather interesting high-frequency reproduction that is both smooth and resolving. It has a smooth lower-treble that retains hints of crispness set to a very laid-back middle and upper treble. It has been said that the EN210 has poor extension, however, to my ears, this is not the case. Rather, the EN210 is clearly attenuated but also pleasantly linear into the higher octaves. Its laid-back presentation results in a lack of any brightness and sparkle, so it isn’t revealing and can lack atmosphere. However, though the EN210 has a very dark background, it retains nice, but not exaggerated air, above average resolution and surprising separation despite its thicker tuning; all indicative of a well-extended high-end, if not one that is revealing in signature.

As a result, the EN210 isn’t the most layered earphone nor is its micro-detail retrieval standout, however, it does have nice foreground detail complimented by great control. Moreover, its treble instrument portrayal is clean and fairly well-bodied, with just some unevenness creeping in at times. Still, cymbals naturally shimmer and decay and strings are very well textured. Guitars have enough edge and attack to promote an engaging listen at the cost of sounding a little insubstantial due to a slightly jarring upper-midrange/lower-treble transition. It remains that the EN210 is just as technically proficient as a lot of competitors out there, it’s just less boisterous in its presentation and that can make it difficult to appreciate if don’t know what to expect. Given its receival, Earnine has clearly subverted the expectations of many.

The EN210 has an intimate soundstage prioritising organisation over expansion. Its dark high-end produces a presentation that lies within the head. It’s nicely rounded between width and depth with a laid-back background that lacks some detail. Layers aren’t clearly delineated due to its treble tuning though instruments are easy to locate and directional cues are fairly precise. Separation is below average, the EN210 never sounds congested but doesn’t awe with air or neutrality and its full-notes quickly occupy its limited space. At the very least, it’s impressive how uncongested the EN210 is considering the nature of its tuning and it is partially redeemed by its pleasing treble extension.

The EN210 has a low 21ohm impedance combined with a higher 100dB sensitivity. As such, it’s easily driven by portable sources while avoiding becoming overly hiss prone. Due to its multi-driver configuration, the EN210 is notably affected by output impedance, however, the changes may actually be positive. To illustrate, I enlisted the DX200 w/AMP5 with a sub 1-ohm output impedance and the 10ohm Hiby R6. The difference was pronounced, with the DX200 providing a full, dark sound and the R6 interestingly offering a more neutral signature. Chiefly, the R6 provided a more transparent midrange with increased upper-midrange presence and brighter, crisper treble. I can actually see a lot of users preferring the EN210’s sound from a source of higher output impedance, impedance adapters can also be used to emulate these effects.

Rose Mini 2 ($100): The Mini 2 is a lot more balanced with greater high-end presence and less mid-bass. Sub-bass extends a lot further on the EN210 and it is significantly fuller throughout. However, the Mini 2 is much tighter and more defined. The Mini 2 has a slightly full-bodied midrange that’s a little more natural than the EN210 as it isn’t as dark and dense. The Mini 2 has more vocal presence and clarity, it’s a little more open sounding due to its more present upper-midrange and treble. The Mini 2 has more lower-treble crispness, it’s also very slightly more detailed. Both have a clean background with more muted air, the EN210 more so. Both are also fairly intimate earphones, the Mini 2 has slightly more width and layers and separates better due to its more neturally toned sound. Still, the Rose may lack some bass for some and that’s where the EN210 finds its audience.

iBasso IT01 ($100): The IT01 is a more V-shaped earphone with a brighter high-end. It has greater sub-bass extension and a lot more emphasis, with emphasized slam. On the contrary, the IT01 is less mid-bass focussed, more neutrally toned and slightly more defined. The IT01 is recessed through its upper-bass and lower-midrange, creating a fairly transparent midrange with a tinge of coolness as opposed to the warmer, fuller EN210. The IT01 has a modest upper-midrange emphasis combined with a lifted lower-treble that enhances clarity and crispness. The EN210 sounds a lot denser and darker, it lacks the same detail presence. That said, the IT01 is only slightly more detailed as it is a little uneven up top. The IT01 has more air and sparkle, it extends similarly delivering similar resolution, if not slightly more. The IT01 has a significantly larger soundstage, it’s also a lot more separated but doesn’t image quite as well due to its sculpting.

TFZ King ($100): The King has a brighter midrange and is more V-shaped overall. Its bass extends further, delivering enhanced sub-bass impact. On the contrary, its mid-bass is less emphasized, making it more tonally neutral and more clearly defined. The EN210 is fuller and warmer, it’s also more bloated producing lower definition. The King Pro has a fairly cool, bright midrange with great clarity. This contrasts to the darker, fuller EN210 which is more natural but also less revealing. The King has a notable lower-treble peak that enhances detail presence. The EN210 lacks any emphasis and can sound quite dull by comparison, though it is not in isolation. The King extends further and has more air and sparkle. It delivers greater resolution and detail retrieval in addition to being brighter but may fatigue some. The King has a significantly larger soundstage, especially with regards to width. It is also more separated and layered.

Simgot EN700 Pro ($150): The EN700 Pro warrants comparison due to its similarly warm sound. That said, the EN700 is more V-shaped than the EN210 with its more emphasized treble and more even midrange. The EN700 Pro extends slightly further at the very bottom and its bass has greater slam. Both have emphasized mid-bass but the EN700 has less upper-bass sounding less boomy as a result. The EN00 Pro has a slightly warm midrange, but as its upper-midrange is emphasized, it doesn’t sound nearly as full and dense as the EN210. The Simgot also has a lower-treble emphasis that brings details to the fore while the EN210 is smoother. The Simgot retrieves slightly more detail as its more linear into its middle treble. The EN210 actually extends slightly further, delivering higher resolution. When it comes to soundstage, the Simgot’s semi-open form factor greatly aids expansion compared to the intimate Earnine. It separates slightly better but doesn’t image quite as well.

Some may find the EN210 hard to appreciate, but it does fill a blank in its price range, offering a warm, full sound without the treble fatigue. It has a pitch black background and a dense midrange with immense focus. As such, the EN210 can lack vibrancy and energy with little high-end to redeem its full low-end. However, due to its well-considered bass/midrange transition, bass doesn’t bog down the rest of its sound, even if it is a little congested in and of itself.

It goes without saying that those looking for a revealing, airy or spacious earphone shouldn’t consider the EN210. However, I can commend the engineering that went into its proprietary parts not to mention the courage to tune an earphone so out of the box. The $100 price point has never been so competitive, and though the EN210 doesn’t awe with its clarity or technical ability, it does do a lot to differentiate itself; its sensitivity to output impedance also enables a more neutral signature via impedance adapters. Ultimately, Earnine’s EN210 suites those preferring a super clean background, voluminous bass and dense, full-bodied midrange though it does sacrifice clarity and expansion to achieve it.