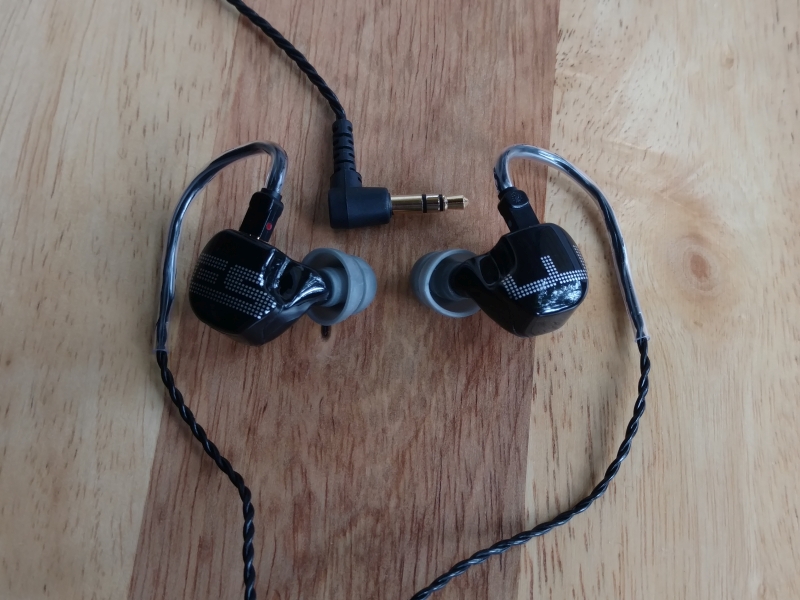 Accessories (4.5/5) – Silicone eartips (4 pairs – large shallow single-flange, small double-flange, 2x medium double-flange), Comply memory foam eartips (2 sizes), cleaning tool, and zippered carrying case
Build Quality (4.5/5) – The glossy plastic shells of the ES3 strongly resemble those of the Earsonics Velvet – the ES3’s faceplates lack the tuning screws present on the pricier model but otherwise are nearly identical. The twisted cables with 2-pin connectors and memory wire are the same as well. As with the Velvet, because there are no external nozzle filters, the included cleaning tool should be used periodically to remove any earwax buildup
Isolation (4/5) – Isolation is quite good with the included double-flange tips – about on-par with the other Earsonics earphones
Microphonics (5/5) – Basically nonexistent, as with all similar designs
Comfort (4/5) – The ES3 uses an ergonomic over-the-ear fit and has a relatively small footprint in the ear, reminding me of Noble’s universal-fit earphones. The angular design of the housings can create some pressure points in small ears but on the whole the earphones are lightweight and very comfortable

Sound (9.3/10) – Back in 2010, the SM3 model earned Earsonics a wide following among fans of universal in-ear monitors by combining cutting-edge triple-driver performance with a warm and smooth sound that stood out among contemporary high-end IEMs. The SM3 underwent a number of redesigns and improvements over the years, but the ES3 is the first time an all-new model has taken its place in Earsonics’ lineup.

Compared to the warm and rich-sounding SM3, the ES3 is a little v-shaped in frequency response – if it had been released in 2010 in place of the SM3, it would have elicited comparisons to the Ultimate Ears Triple.Fi 10 and the Westone 3, rather than the Westone UM3X and Shure SE530 as the SM3 did.

The coloration of the ES3 is rather mild – there’s the slight bass enhancement I expect from a v-shaped earphone and the mids are bit laid back, but compared to more conventional v-shaped sets – even top-tier ones such as the DUNU DN-2000 and FLC Technology FLC8 – the ES3 is quite well-balanced. For instance, next to the FLC Technology FLC8 in the default configuration, the ES3 has similar bass and midrange balance but is significantly less treble-heavy, making the FLC8 sound noticeably brighter and harsher in comparison. The clarity of the ES3 is a half-step behind the FLC8 as a result and the soundstage isn’t quite as wide, but the Earsonics IEM ends up sounding more balanced and coherent, with a thicker, warmer, more natural sound that’s still well short of being as colored as the old SM3.

The ES3’s bass is punchy, tight, and well-extended – not as enhanced as that of a DN-2000, which has a slightly deeper and more powerful low end, but noticeably more impactful compared to monitors with flat sound tuning, such as the InEar Stagediver SD-2 and Ultimate Ears UE900.

The SM3 – the ES3’s predecessor – accomplished the smoothness for which it is renowned with an upper midrange dip and moderate treble quantity. The ES3 takes more chances with its treble – the top end is energetic, befitting a mildly v-shaped earphone, but has just the right amount of brightness in my book. It sounds both very natural and yet still quite crisp/clean compared to a lot of smoother/warmer earphones.

The ES3’s presentation is less intimate than that of the SM3, partly because the newer model’s mids are more laid-back, and significantly more dynamic compared to flatter IEMs, as tends to be the case with v-shaped earphones. The HiFiMan RE-400, for example, sounds flat and downright congested next to the ES3, lacking especially in bass impact, crispness, and airiness.

Below are several head-to-head comparisons between the ES3 and related or competing IEMs, provided as additional context for the ES3’s performance.

The SM3 is well-loved for its warm and smooth sound – for a BA earphone, it boasts rather impressive bass power, rich and thick mids, and is extremely non-fatiguing thanks to an upper midrange dip and moderate treble quantity. It also has an intimate but very well-imaged presentation, which ups the “immersion” factor.

The ES3, on the other hand, is a little v-shaped in frequency response. The most noticeable difference between the two in back-to-back comparisons is midrange positioning and clarity – the SM3 is more forward and significantly less clear, especially in the lower midrange. The mids of the ES3 are a little thinner and the upper midrange is more forward, giving the earphones a brighter tone compared to the SM3. It just bright enough to give the sound some energy without causing it to be harsh or sibilant and makes the SM3, with its upper midrange dip, sound somewhat dull in comparison, especially when it comes to female vocals.

Despite being less warm overall, the ES3 has punchy bass with more immediate impact, versus the SM3’s softer bass note and tendency to bleed up into the lower mids a bit. The midrange of the SM3 is thicker but also a bit more congested and, while quite enveloping, it has a more intimate soundstage. The ES3 sounds a bit more dynamic, as v-shaped earphones usually do when compared to more mid-centric ones. The SM3 is a little more efficient, but the ES3 is a large step up from the SM64 model in this regard.

The SM64 is something of an evolution of the SM3 sound, a solid all-rounder known especially for its fantastic bass. The new ES3, in comparison, has a cooler and brighter tone with a bit less bass emphasis and marginally better clarity. The low end of the ES3 is still quite punchy but the sound is a little more balanced overall and the bass doesn’t quite have the same depth and weight as that of the SM64. The SM64’s presentation is wider while the ES3 has much better sensitivity.

The housing design of the ES3 is very similar to that of the Velvet, and while it lacks the Velvet’s sound tuning functionality, there is a clear resemblance in sound as well. With the Velvet in its least bass-heavy configuration, the ES3 is still flatter and has better balance between the midrange and low end. It is slightly more sensitive as well. The Velvet is a little warmer in tone, has stronger bass, and tends to sound more dynamic and involving. There’s a strong case to be made for the ES3 being a better value, but the fact that its extra bass doesn’t make the Velvet sound muddy or sacrifice clarity in comparison to the more balanced ES3 is quite an accomplishment and will keep the Velvet on my list of recommendations.

The next most similar Earsonics model to the ES3 in sound after the Velvet, the S-EM6 is a universalized version of one of Earsonics’ higher-end CIEMs. Compared to the S-EM6, the ES3 sounds brighter and thinner, especially in the midrange. Its bass is slightly less powerful, but also significantly tighter and less muddy – a worthwhile tradeoff in my book. The S-EM6 is warmer, thicker, and softer-sounding, with a more laid-back presentation offering a much more relaxed listening experience. In terms of sound signature, the S-EM6 makes a lot of sense as a flagship upgrade from the old SM2 and SM3 models. However, the fact that the difference between these earphones comes down more to sound signature than performance underscores the value proposition of the ES3.

The 1MORE Triple is currently the most affordable decent-sounding triple-driver IEM on the market, and also a good demonstration of how mild the ES3’s sonic coloration is. The Triple is relatively balanced for a hybrid-driver earphone, but still sounds quite v-shaped in comparison to the ES3, which falls much closer to flat/neutral on the sound signature spectrum.

The biggest differences that result are in the midrange, where the ES3 sounds much less recessed and a lot clearer. The 1MORE also suffers from more intrusive bass and thinner treble, which makes the overall sound less natural in comparison to the ES3. The Earsonics benefit from superior balance and better technical performance with a more coherent sound, smoother treble, and a wider and more open presentation. The lack of treble peakiness also gives the ES3 a warmer tone despite its bass being less powerful.

Audio-Technica’s dual-driver IM02 is one of the best values in musicians’ in-ear monitors right now, with units available for well under $200. It holds its own well against higher-end sets, especially in the context of its sound signature, which is on the warm and mid-centric side of “flat”. The ES3 is a tad on the opposite, v-shaped side, boasting more bass depth and impact and sounding more full-bodied, more dynamic, and yet also a little clearer than the IM02. The IM02 has more forward mids, which makes it sound a little duller, and less bass presence with no benefit to clarity or resolution. The ES3 is also more refined through the upper midrange and treble while the IM02 is grainier.

Like the Earsonics ES3, Westone’s W40 represents the second generation of the company’s (W-series) IEMs. However, while the ES3 is a completely new tuning, the W40 is evolutionary at best, staying very close to the sonic characteristics of its predecessor.

When comparing them head to head, the ES3 sounds more like a balanced armature earphone, with a thinner note presentation, more v-shaped signature, better clarity, and tighter bass. The W40 boasts a warmer, thicker sound that can sound more natural at times, making the ES3 appear somewhat cool and analytical, but also much more clear. The ES3 can seem a bit heavy on upper midrange, largely because the W40 has a dip there, but also sounds more detailed than the Westone. In addition, despite being significantly more crisp and energetic, the ES3 isn’t harsher – in fact, at times it fares better at handling sibilant recordings than the warmer, darker W40. The deep bass of the ES3 is also more audible, not having the W40’s more emphasized mid-bass to contend with.

Audiofly’s quad-driver musician’s monitor is more balanced and neutral than Westone’s, which puts its sound signature between the W40 and ES3. The ES3 has a more v-shaped tuning with a more visceral low end giving it a punchier, livelier sound. The AF180, with its flatter sound and more forward mids, seems less dynamic in comparison and has less of both bass depth and impact compared to the Earsonics. The Audiofly unit does, however, have a larger soundstage and seemingly better positioning thanks to mids that are not recessed.

Value (9/10) – Although the new Earsonics ES3 is a more capable IEM than its predecessor, one can argue that in chasing technical performance, it loses some of the magic of the silky-smooth SM2/SM3/SM64. Certainly, the distinct coloration of Earsonics’ previous-generation earphones could be an asset, but it was also often polarizing among listeners. The sound tuning of the ES3 is more universal, and while competition is plentiful at this price point, its performance is more akin to Earsonics’ higher-end Velvet and S-EM6 models than the SM3 it replaces, further underscoring the value proposition.