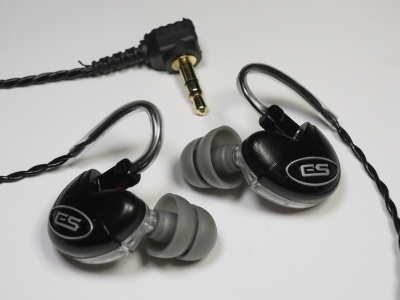 Accessories (4/5) – Double-flange silicone tips (2 pairs), foam tips (2 sizes), cleaning tool, and clamshell carrying case
Build Quality (4.5/5) – Like the first-gen EarSonics models I’ve reviewed, the SM64 uses plastic shells reminiscent of the Westone stage monitors. The cords are now detachable, however, utilizing a common 2-pin socket, and have a memory wire section for a more secure fit. The twisted cables are similar to those used by Westone universals and most custom-fit earphones
Isolation (4/5) – Quite good with both the included silicone and foam tips
Microphonics (5/5) – Basically nonexistent, as with all similar designs
Comfort (4.5/5) – The new smooth, rounded housings are a major improvement over the angular design of the old SM2/SM3, fitting securely without applying pressure to parts of the outer ear like the SM3 shells did

Sound (9.3/10) – The sound of the SM64 bears a resemblance to its predecessor, the SM3, but at the same time offers a more conventional balance and presentation. First the sound signature – the SM64 is a warmish earphone with impressive bass quality and clear, yet forgiving sound. The low end of the earphones is outstanding – the bass has very good depth and control. It is boosted, yet maintains a good balance of mid- and subbass. The result is a low end that’s extended and powerful, yet very clean and controlled. It makes the bottom end of the VSonic GR07 sound a touch loose and intrusive and competes in quality with the decidedly less bassy Ultimate Ears 900.

The midrange of the SM64 maintains good presence but is not overly forward. Tonally, the EarSonics are slightly warm – warmer, for example, than Philips’ flagship Fidelio S2 model and the Ultimate Ears 900. Note thickness is impressive as well, and while the SM64 doesn’t have the emphasized upper midrange and treble that typically accentuate clarity, it is still about as clear as the flatter and more accurate-sounding VSonic VC1000 and Philips Fidelio S2, among others.

On the point of accuracy – the SM64 has an upper midrange dip, not unlike its predecessor, the SM3. However, the dip of the SM3 seems to be broader and has a greater effect on the sound, resulting in greater veiling and a darker overall tone compared to the SM64. The SM64 still cannot be called neutral, however, and lacks some of upper midrange presence and accuracy compared to earphones such as the Fidelio S2, UE 900, and VC1000, just to name a few.

The treble of the new EarSonics has pretty good presence, appearing more energetic than, for example, the EarSonics SM3, Westone UM3X, and Sony MDR-7550, but not harsh or sibilant. It seems to be a case of taking the middle ground- a little smoothed-over compared to accuracy-oriented in-ears such as the VSonic VC1000 and Philips Fidelio S2 but at the same time is not as smooth as the Sony MDR-7550. Still, while not perfect, it’s an improvement on the old SM3 and a fair compromise between risking harshness and losing crispness. The VSonic GR07, for example, is quite sibilance-prone compared to the EarSonics.

The presentation of the SM64 has good depth and width, and appears to be tuned for more universal appeal than the uniquely enveloping sound of the older SM3. Good bass control and a lack of midrange recession help the SM64’s separation and imaging. The VSonic GR07, for example, sounds a bit congested and lacking in soundstage depth in comparison and even the UE900, while spacious overall and more impressive in this regard than the GR07, still doesn’t quite have the depth of the SM64.

One last thing worth noting is that the SM64 is not very sensitive and was less efficient than all of the earphones I compared it against, especially the SM3.

Pitting the SM64 against its predecessor is telling of the direction EarSonics has taken with the tuning of the new model. While the SM3 remains a very unique earphone with its thick, lush mids and enveloping presentation, the SM64 boasts a more conventional – but at the same time more capable – sound. The low end of the SM64, for instance, is more focused on subbass and less on mid-bass, resulting in sound that is tighter and cleaner overall. The mids of the SM64 are not as forward as those of the SM3 and the note presentation is not as thick and creamy.

The thinner note presentation affords the SM64 a slightly clearer sound, which is also helped along by greater treble energy compared to the previous-gen model. The brighter treble results in a more neutral tone compared to the warmer SM3 – though the SM64 is not flat in FR, it is more balanced than its predecessor. The more mid-forward SM3 also boasts a more enveloping presentation, which is something that resulted in a lot of polarized opinions and heated debate. The new SM64 has a wider soundstage and a more conventional out-of-the-head presentation. Overall, while the two earphones are more different in sound signature than technical ability, I would rather listen to the new SM64 nine out of ten times.

Phonak’s PFE 232 is a dual-driver design with a mildly v-shaped sound signature – quite a contrast to all EarSonics models, especially the old SM3. Compared to the new SM64, the 232 has brighter, more energetic treble and at times seems clearer and crisper, as tends to be the case with brighter earphones. However, the 232 also sounds a little “hot” and has a greater tendency towards sibilance when pitted against the more relaxed treble of the SM64. Its sound, especially the top end, seems thinner and less natural compared to that of the EarSonics.

The bass of the PFE is greater in quantity compared to the SM64 and tends to intrude on the more recessed mids of the Phonaks. The EarSonics, on the other hand, boast less aggressive bass and a fuller, more prominent midrage. That, combined with the smoother treble of the SM64, makes it more natural and easier to listen to than the PFE, which is why it has won my ear here.

Sennheiser’s flagship in-ear boasts plentiful bass and a more v-shaped overall sound compared to the EarSonics. It offers greater mid- and subbass presence, as well as greater impact and note weight. The EarSonics, on the other hand, exercise a bit more bass control. The lower midrange of the IE 800 is more recessed but maintains clarity very well. At the same time the SM64, with its laid-back upper mids, sounds smoother than the somewhat splashy IE 800. Subjectively, the performance of these two is actually rather close, though the IE 800 did win my ear more often than the SM64 for its greater midrange accuracy and huge bass that does not sacrifice clarity.

AKG’s BA-dynamic hybrid is yet another earphone with a more v-shaped sound compared to the EarSonics SM64. The K3003 is a set I’ve always rather liked, and that doesn’t change in head-to-head comparisons with the EarSonics. The AKG boasts more treble presence, energy, and sparkle, and the upper midrange is more filled-in, resulting in the K3003 appearing more detailed overall.

The bass of the K3003 is a little more powerful than that of the SM64, though the difference is not night and day. The mids of the SM64 are fuller and more forward, on the other hand, and the overall tone is warmer. The brighter, more v-shaped K3003 nonetheless sounds a little more neutral to me than the SM64, but it’s difficult to fault the bass and lower midrange of the EarSonics even next to the hugely pricy AKGs.

The CTM-200 is an entry-level dual-driver custom monitor priced right near the SM64. Tuned for an accurate, musician-friendly sound, the CTM-200 is not as warm in tone as the SM64, with bass that rolls off earlier and lacks the impact of the EarSonics. The lack of proper subbass extension hurts the realism and accuracy of the low end – simply put, the EarSonics sound much more effortless and realistic when it comes to bass.

Aside from the bass, the dual-driver CTM-200 actually does offer some advantages over the SM64 – its mids, for example, are flatter overall and provide better accuracy. The upper midrange is more filled-in and the overall tone is cooler. Despite this, clarity is actually on-par between the two earphones and while the presentation of the CTM-200 is a bit more out-of-the-head, the SM64 keeps up very well in soundstage size, imaging, and overall sense of space. Choosing between these two earphones is a matter of choosing between the superior bass of the SM64 or the more accurate sound and marginally larger presentation of the CTM-200.

Value (9/10) – EarSonics broke onto the worldwide audio scene a few years back with the rather controversial SM3 – an earphone that, with some reservations, I quite liked. The sound of the new SM64 retains resemblance to its predecessor but also seems to be tuned for more universal appeal. It’s not tonally neutral, but it refines the formula in many ways – even the fit has been improved dramatically compared to the first-gen EarSonics products.

These days there are dozens of great-sounding earphones available at almost all price points so all high-end purchases are tough to justify, but there’s one thing I’ll freely admit – the SM64 is much more proficient than most at getting my toes tapping.

Pros: Great bass and presentation; very comfortable, especially next to old EarSonics models; good isolation and overall user-friendliness
Cons: Could be flatter between the upper midrange and treble