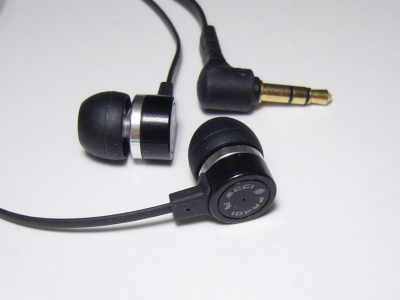 Accessories (3.5/5) – Single-flange silicone tips (3 sizes), shirt clip, and large clamshell carrying case (extra Sony Hybrid tips included when purchased from lendmeurears.com)
Build Quality (4/5) – As with all of the other ECCI earphones, the housings of the PR401 are made of aluminum and feel quite sturdy. In terms of size, the shells of the PR401 are surprisingly shallow – a bit more than two times smaller than those of the Nuforce NE-700. The thin and narrow flat cable is lightweight and strong enough but slightly more tangle-prone than the thicker flat cables of the Sony XB40EX or Dre Beats Tour
Isolation (3/5) – The short shells of the PR401 may hinder deep insertion for some but I get pretty good isolation for a vented dynamic with the ECCIs
Microphonics (3.5/5) – The thin and flat cable carries a good bit of noise when worn straight-down but isn’t as difficult to route over-the-ear as with other flat-cable earphones. The included shirt clip helps as well
Comfort (4/5) – The housings are lightweight and quite small. They are also quite short and not at all conducive to deep insertion but the PR401 sounds fine with a shallower fit

Sound (7.7/10) – I’ve been a big fan of the PR-series earphones since before the ECCI brand split off from its parent company, well-known Chinese amp manufacturer Cyclone. After the rebrand, ECCI immediately released the PR100 and PR200 which, while very solid all-rounders, never impressed me as much as the old PR1 and PR2 when it came to overall refinement. The PR300 came later and spiced up the sound of the PR200 by adding a slight bit of boost in the bass and treble regions. Still, the PR300 failed to capture the spacious feel and incredible detail of the old PR1 Pro. The PR401, however, as the model number indicates, adds another level of performance to the PR300 plus a little something on top – a ‘wow’ factor, if you will.

At the bottom end the PR401 resembles the PR300, offering punchy, emphasized mid-bass falling between the Fischer Silver Bullet and Brainwavz M2 in quantity. The bass response is full-bodied and impactful but at the same time well-controlled and quite accurate. As with the PR300, bass is not the sole focus of the PR401 but there is more than enough to make for a fun listening experience. The bass emphasis does give a very slight bit of warmth to the lower mids but the bright treble acts as a good counterbalance. The midrange itself is slightly recessed next to the bass and treble but is free of bass bleed and retains good detail and clarity. Instruments sound crisp and natural and vocals have decent energy even next to the mid-forward M2. Unlike the even more v-shaped Klipsch S4, the PR401 never sounds thin and remains smooth throughout the upper midrange and lower treble. There is still a good bit of treble emphasis and sparkle is plentiful. The treble is clear, crisp, and detailed, with surprisingly good (though not RE0-good) extension up top.

My favourite aspect of the PR401, however, is the presentation, which finally re-captures the spaciousness and realism of the old PR1 Pro. The soundstage has great depth and good width and the added treble emphasis gives the PR401 a slightly bright overall tone and an airy feel. As with the old PR1, the PR401 does a good job with layering and positioning, tracking multiple instruments very well for a mid-range earphone without sounding thin or disjointed. On the whole, I would say that the PR401, in both balance and presentation, is the mid-range equivalent of JVC’s much-pricier HA-FX700 woody. Sure, the PR401 doesn’t quite keep up in detail or refinement and lacks both the convincing timbre and incredible positioning precision of the $350 JVCs, but there certainly isn’t a more logical top-tier upgrade to the PR401 than the FX700.

Value (9/10) – The ECCI PR401 is another one for the growing list of truly excellent mid-range earphones coming out of the increasing competition in the market segment. In contrast to the Brainwavz line and Fischer Audio earphones, the PR401 is faintly v-shaped in response, emphasizing bass and treble slightly over the midrange. It also borrows a trick or two from the old Cyclone earphones, bringing to the table a spacious and airy presentation with good separation and impressive imaging. With comfort, isolation, and build quality to match, the PR401 is a very impressive package and a fairly unique alternative to the multitude of excellent choices already on the market.