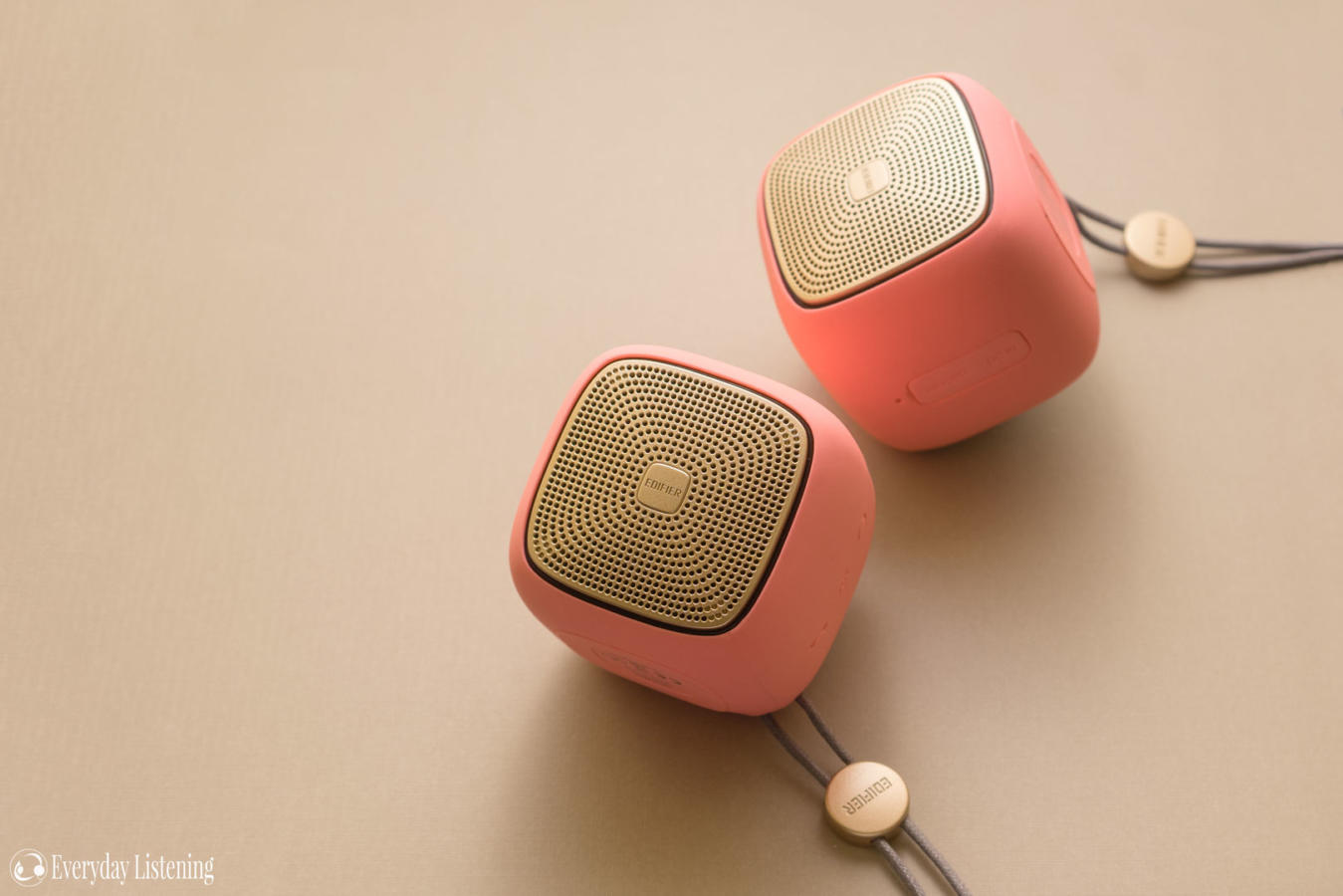 The MP202 Duo utilises a single 2” driver with a single passive radiator at the rear. Despite their size, each has a substantial 5.5W RMS output, creating a total of 11W when paired in tandem. To put that into perspective, larger UE Mini Boom outputs a paltry 2.5W RMS.

Portable speakers lie on a wide spectrum of quality, some are pretty horrific while others really surprise with their quality. I can’t say the same for speakers as small as this, a select few reproduce bass at all and most have a fairly modest maximum volume. The more premium MP202 Duo doesn’t deviate a lot from this, but its quality drivers produce a sound that is nicely balanced; not piercing in the highs nor are they completely anaemic.

They do seem to prefer quality over volume, producing 87dB of maximum volume. That’s a large upgrade over a phone speaker and enough volume to fill a small to medium sized room. However, it also isn’t nearly as high as the 93+ dB offered by similarly priced, albeit larger speakers; especially given that a 6dB increase represents twice the perceived volume.

That said, the ability to alter the placement of each speaker significantly increases immersion, providing some real stereo separation that single speakers physically can’t provide. Of course, their sound isn’t nearly as substantial as something like the Archeer A320 or the Denon Envaya Mini, but they’re a well-performing speaker considering their size.

The MP202 Duo is a mellow but full-bodied speaker with a mid-focussed signature. This mostly stems from an enhanced upper-bass/lower midrange that provides a warm, organic tone in culmination with a rather laid-back high-end. They lack bass impact and provide little energy up top, but the MP202 Duo never sounds bright to fatigue or lean as a result. When compared to similarly sized speakers, they sound a lot more natural; perhaps not due to a huge advantage in end to end extension, but by maximising the quality of the frequency range they do cover.

Edifier’s quoted frequency range outlines a significant bass roll-off below 150Hz which seems congruent with my subjective impressions. As such, sub-bass is non-existent with roll-off beginning partway through mid-bass. Mid-bass also isn’t particularly present though they do have some fullness in this range. This produces fairly neutral bass note size so while not rich, they also don’t sound especially thin and lows aren’t drowned out by the higher-frequencies. In fact, upper-bass is actually emphasized, instigating the speaker’s warmer tone and providing body to its low-end.

As a result of this style of tuning, bass does sound a little tubby and there is little depth or impact to the MP202’s sound. That said, bass guitars still have some texture and drums are fast and punchy even if bass drums sound small and distant. They aren’t perfect for EDM or rock, but easily suffice for pop and videos, providing a solid foundation for a natural midrange. So while the MP202 Duo doesn’t match larger speakers with its ability to reproduce low-frequencies, they’re still a huge upgrade over laptops and phones that don’t reproduce much bass at all.

Mids are the main focus of the MP202 Duo’s sound, but though forward, they’re approachable and pleasing to the ear. This is mainly due to the speaker’s elevated lower-midrange mated to a slightly attenuated centre midrange that provides a full-bodied presentation combined with a slightly brighter signature that grants increased clarity. And, as its lower-midrange is fairly linear with its emphasized upper-bass, the speaker’s low-end doesn’t spill over its slightly more laid-back male vocals. Rather, they’re granted an organic warmth that permeates throughout. The result is a speaker that clearly presents vocals without fatigue or peakiness.

Their warmth does has its caveats, most noticeable with male vocals on poorly mastered albums that can be subjected to some muffle. However, they’re clear and well-articulated for the most part, with easily discernible speech when watching videos and a pleasing sense of detail for a compact portable speaker. Upper-mids have slightly more emphasis, and this slight brightness serves to counteract their warmth with enhancing clarity. As such, I found female vocals to sound less obviously coloured and devoid of minimal irksome veil. The MP202 Duo, therefore, presents forward vocals and a smooth, warm tuning well-suiting long listening sessions and a wide range of genres.

Highs are quite modest in quantity; present enough to retrieve some detail but lacking the extension to provide much air or energy. Lower-treble is the speaker’s main focus, preceding a substantial roll-off above. It’s still attenuated by comparison to the MP202’s elevated upper midrange so its sound does lie on the smoother side. Still, the speaker is granted some crispness and modest amounts of detail; they’re certainly more engaging than any hyper-portable speaker I’ve heard. There’s little else above that initial crispness, no shimmer, air or sparkle which works for and against its sound.

On one hand, the MP202 sounds very clean, its dark background bringing foreground vocals and instruments more into focus. On the contrary, instruments sound quite truncated; cymbals clash but don’t resonate, guitars are focussed but muted and higher elements such as strings and high-hats either sound very distant or absent. The result is a speaker that presents well but lacks depth. It doesn’t provide much competition to models such as the Envaya Mini, but in its class, there’s no denying that the MP202 is a convincing proposition if only due to that initial sense of detail.

All comparisons were volume matched using an SPL meter, running from Apt-X enabled sources with the same files. Both the Envaya Mini and UE Boom are larger speakers, but both occupy similar bag space when taking into account the two MP202’s. Of course, neither offer real stereo separation, in fact, the UE Boom only outputs in mono.

The Envaya Mini remains my favourite portable speaker for good reason, it’s feature rich, solidly constructed and sounds brilliant. Most notably, its bass has terrific extension that blitzes more expensive models from UE and JBL, competing head-on with the Soundlink Mini from Bose. The MP202 Duo can’t compete in this regard, the Denon extends right down to 65Hz before a nice bump in mid-bass fullness around 120Hz. By comparison, the MP202 Duo doesn’t even reproduce frequencies beneath 150Hz and the audible difference cannot be overstated. The Denon Envaya sounds far fuller, is more defined and reproduces the full range of instruments. That said, mids are actually more comparable than one would think.

As expected, the Envaya is fuller due to its greater mid-bass presence, though it is also more susceptible to muffle. Moreover, as the Envaya has a slightly darker midrange, lacking the vocal clarity of the Edifier. On the contrary, the MP202 doesn’t have quite the same depth as the Denon due to its leaner bass and smoother treble, but it’s just as natural and more transparent, greatly benefitting use with video and film. Highs are again, more potent on the Envaya, its more extensive driver setup and larger sound chambers permitting a wider frequency response. The Envaya is the more detailed speaker, with enhanced lower-treble adding some extra energy and attack to its sound.

The MP202 is smoother and less detailed, its higher elements sound very distant by comparison. Furthermore, the Envaya extends into middle treble, providing more accurate instrument reproduction and greater vocal articulation. Finally, the Envaya is utilising psychoacoustic processing to provide an enlarged soundstage though it still can’t match the stereo separation of the MP202 Duo. Finally, the Envaya Mini is approximately twice as loud with a maximum volume of 92dB as opposed to 87dB on the Edifier.

I personally don’t consider the UE Boom to be a highly competitive speaker, especially with models like the Envaya Mini available for less. However, it does represent a very popular model that many are familiar with. The UE Boom’s low-end sounds lean compared to the Envaya on account of a substantial roll-off south of 110Hz. As a result, they do extend slightly more than the MP202 Duo, but the difference isn’t nearly as pronounced as compared to the Denon. The UE Boom does have a little more impact and fullness to its sound, but it’s still mid-forward in its overall delivery.

The UE Boom also climbs to a focus around 400Hz which grants quite a tubby bass tone that saps definition. It has a more jarring transition into its midrange creating thinner but also clearer vocals than the MP202 Duo. Both are quite mid-forward, producing easily discernible vocals in addition to intimate backing instruments. The UE Boom sounds noticeably brighter with ascending emphasis into the upper midrange and lower-treble. As such, it sounds more articulate and details are brought more to the fore than the smoother, mellower MP202 Duo. Treble also extends further on the UE Boom though not to the extent of the Denon.

It has a decent amount of air and shimmer but sounds quite peaky, valuing engagement over a natural timbre. As such, it best suits more energetic genres but may tire over longer listening sessions. Due to its vertical orientation, the UE Boom outputs in mono, with essentially no soundstage. Resultantly, it lacks a lot of the immersion offered by the MP202 Duo despite its more engaging sound. Like the Edifier, the 2 Booms can be paired in stereo through a smartphone app though at this point it becomes a very price prohibitive proposition. In return, the UE Boom has the highest maximum volume at 93dB, twice as loud as the MP202 Duo, and a little louder than the Envaya Mini making it best for larger spaces.

The MP202 was a nice hyper-portable speaker and the new Duo model compounds upon its success by offering stereo output. As they’re battery powered, the speakers can be placed a significant distance apart to provide a wide image, and they have enough range to avoid cutting out when done so. True stereo separation from a Bluetooth speaker isn’t unprecedented, but it is rare at this price and level of portability. Combined with its full, vocal forward sound, the MP202 Duo is perfect for laptop and smartphone users seeking greater immersion from films and videos.

Of course, when compared to larger speakers such as the class-leading Envaya Mini, the Edifier’s clearly don’t provide the same range or dynamics. However, given their size, Edifier have extracted very pleasing sound quality that excels with videos and easily suffices for music, at least, much more so than the similarly sized competition. The MP202 Duo is also feature-rich and well constructed, with additions such as micro-sd and USB playback aiding practicality. Because that’s the allure of these speakers; their sound is pleasing, their maximum volume sufficient, but their usability is outstanding.