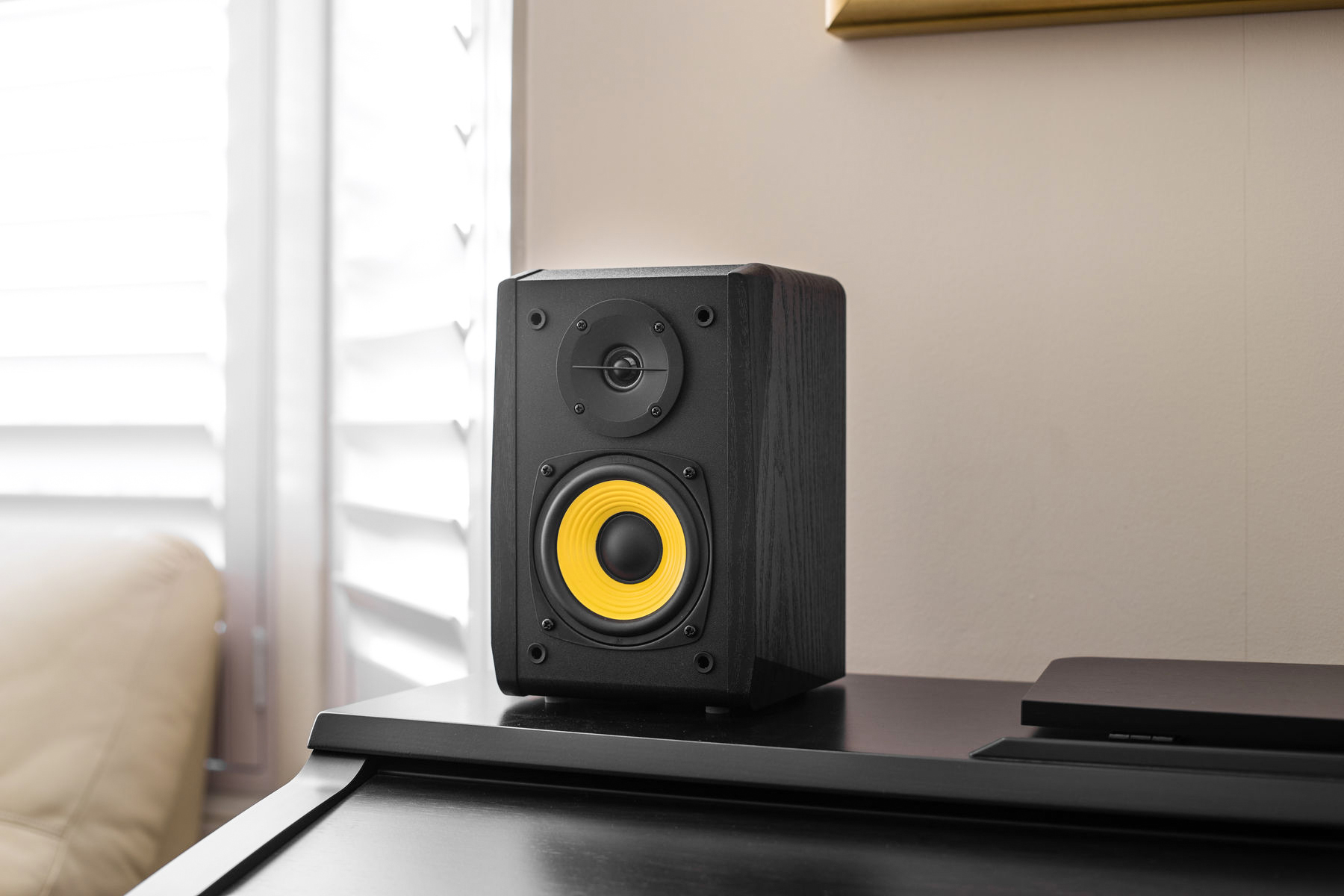 The R1010BT’s utilise a dual driver setup to provide respectable range and end to end extension, especially when considering their rather meagre 24W RMS output power. Unsurprisingly, they have the lowest rating in Edifier’s lineup, even the R1280T produces a solid 41W. Despite this, they provide quite a full sound, especially when placed in front of a wall. And since the speakers utilise only active drivers, they sound rich even at lower volumes making them perfect for bedroom use. They are still more of a near field speaker without adequate power to fill anything larger than a small room, making them more suited towards use with a computer.

As with Edifier’s other bookshelf speakers, I preferred to listen to the R1010BT without covers to achieve slightly more clarity and resolution, all comments during this review will be with the covers removed running from a wireless connection unless otherwise stated.

The R1010BT is a full-bodied speaker characterised by a warm low-end with less prominent mids and highs. They don’t have the greatest clarity and midrange body nor do they have the greatest bass extension, but the speakers are relatively balanced once the bass dial at the rear is appropriately adjusted. Treble is more polite despite having that dedicated tweeter driver though the R1010BT’s portray convincing balance and

Sub-bass is mostly non-existent, the R1010BT unsurprisingly lacks the authority and power to create visceral impact like larger, more expensive speakers. But just higher up, bass comes on quite strongly through the mid and upper-bass frequencies, imbuing them with a sense of fullness and warmth. For my tastes, the speakers sound a little boomy and uncontrolled though they are pleasingly bodied and extended for a budget speaker. Bass also has a sense of tubbiness similar to that found on portable speakers like the UE Boom though not nearly to the same extent, and it goes without saying that they easily beat even the best portable speakers such as the Envaya mini and Bose Soundlink Mini in terms of low-frequency quality and extension. Otherwise, the R1010BT’s bass is relatively vibrant and surprisingly well textured. Listening to Eric Clapton’s “Old Love” and bass sounded taught and defined with impressive texturing and detailing to each bass note. On the contrary, listening to a song with more deep-bass content such as Frank Ocean’s “Pink + White” and the R1010BT’s struggled to provide adequate quantity and extension, losing bass control and compromising texture. Still, for the majority of genres, the R1010BT’s provide a very pleasing bass response and offer a great affordable upgrade to any smaller portable or integrated laptop speakers.

While the midrange is usually my favourite aspect of Edifier’s speakers, the R1010BT didn’t quite impress me like those before. They do share the same kind of full-bodied, slightly darker tonality as these other speakers, but the R1010BT lacks the clarity of higher end models, being tuned for long-term listenability over engagement. As such, they are more suited towards use in a small room/bedroom or with a computer rather than critical listening as one would expect given their size and price. The R1010BT, therefore, provides a laid-back presentation with smooth if not particularly clear vocals and modest detailing that sits more in the background. Male vocals sit slightly in front of upper midrange elements though both manage to be clear enough for video and film in addition to music. Lower mids are characterised by their warmer tone and fuller body that is very forgiving of poorly mastered tracks but can sound slightly thick with everything else. Still, vocals are perfectly distinguishable and the speakers grant instruments such as acoustic guitar with a nice organic body. Upper mids tell a similar story, they aren’t quite as warmed as the lower mids but retain that same kind of fuller tone. Resolution and clarity are not the speaker’s strong point though they have some modest detail retrieval when called for. The speakers do have some veil and muffle and while they are certainly no worse than something like the Logitech Z623 or Envaya Mini, the R1010BT lacks the huge midrange edge over 2.1 systems that the R1280T and R1700BT possessed. For example, listening to Radiohead’s “Paranoid Android” and the R1010BT’s provided a pleasing listen but one that was lacking some nuance and transparency. Thom’s vocals came through clearly and their reproduction of higher frequency details was adequate if blunted. Once again, the R1010BT’s provided a very unfatiguing listen at the cost of intricacy, it really depends on the intended uses and sound preferences of the buyer but I would say that the R1010BT will not be as universally adored as its higher priced brethren. At least no one will mistake the R1010Bt for a thin sounding speaker which is arguably a less pleasing tonality.

Edifier have intelligently tuned that tweeter driver to liven up the R1010BT’s sound a bit and prevent outright congestion and dullness. That 13mm dome driver still retains a smoother, more laid-back presentation but it does provide a little extra crispness to lower-treble detailing and some sparkle to middle-treble notes without coming off as splashy or unrefined, quite uncommon at this price point. While they don’t have huge upper treble extension and air, the R1010BT nonetheless provides an insightful high-frequency response that will likely prove to be its strongest asset over 2.1 and portable speaker systems that can struggle in this region. Extension isn’t great, the speakers have almost no air to cymbals and high-hat details are either distant or cut-off entirely, but lower and middle treble detail retrieval is above average and slightly aggressive in presentation, adding some interest. Guitars are flattered by this presentation, adding some additional crispness while more forward instruments such as strings and trumpets are smooth and refined. Layering to these details is not exceptional, but separation is adequate to avoid the sense of congestion that tends to affect these lower priced speakers.