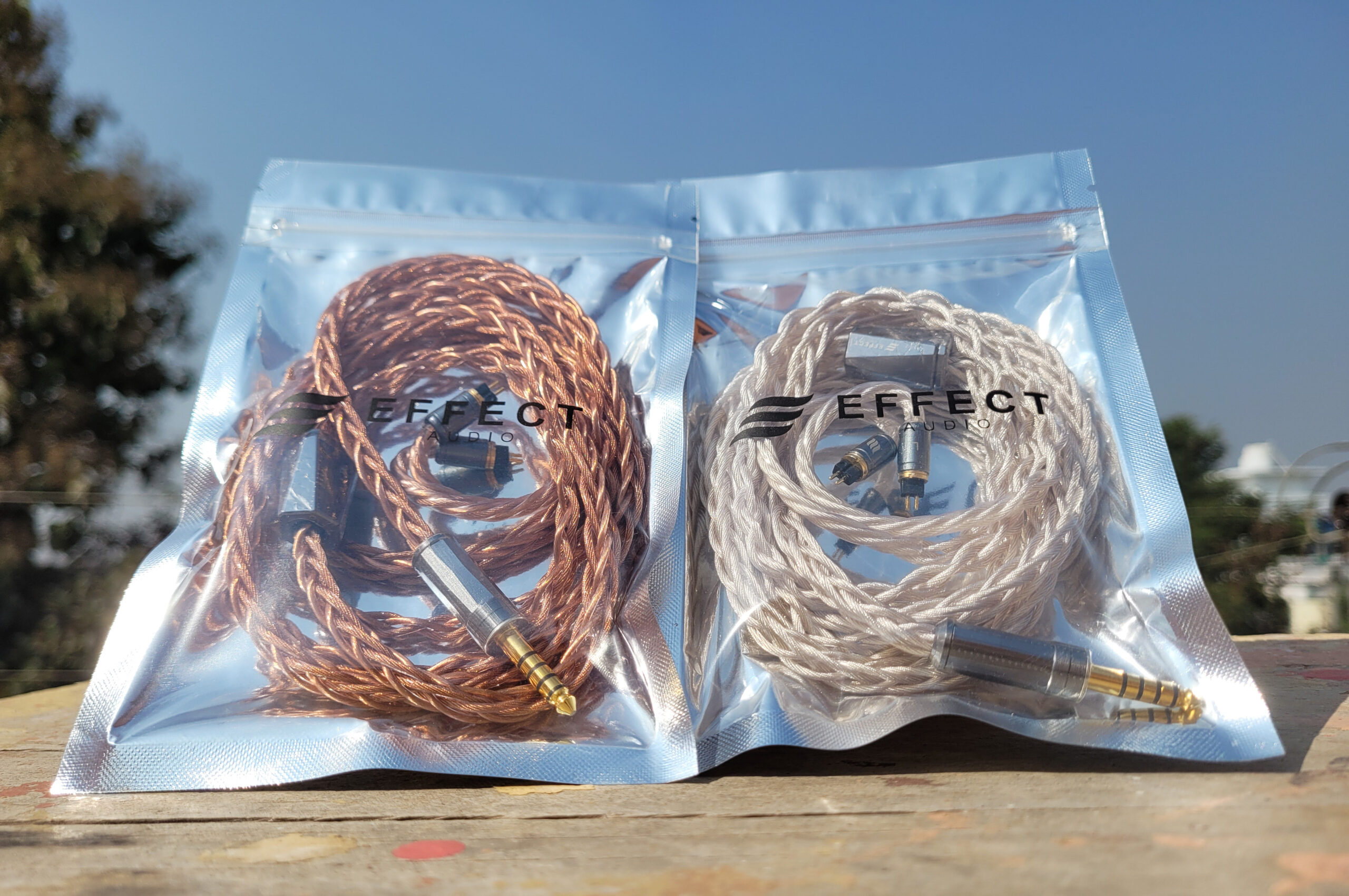 I have been working with Effect Audio for a while and I don’t think any of our reader is unaware of this Singapore based brand. They have been making some of the best quality cables available in the market and have worked with a few US based brands like Empires Ears. I have reviewed a bunch of their cables and was seriously impressed with the Signature series of cables. I was super impressed with the Cadmus but I recommended the Eros S the most because this cable pairs exceptionally well with Monarch MK2 and few other high end IEMs. The trios of cable are some of the best cables for their prices, no doubts about that but only Eros S has 8 cores while the other two have only 4. But for Christmas Effect audio has decided to treat us with a couple of surprises. Not only Ares S and Cadmus will be available with the 8 cores while retaining the Con-X connectors and exactly same cores as the cheaper 4 core versions, these will be paired with Effect Audio’s new chamber multi compartment carrying case at attractive prices of $349 and $369 respectively and Available in limited quantity.

Let me use some literature from Effect Audio:

Here are 2 surprise Gift Boxes curetted just for you! Snatch the chance to finally purchase a 8 wire version of our fan favorite Ares S and Cadmus available just for these

2 weeks at an unbelievable price! Santa really does exist, doesn’t he?

Ares S has always been that power beast. Its strength lies in its ability to bring out emotional vocal quality and weight to the lows while a proprietary dual geometric structure ensures that overall sonic resolution is enhanced.

Now with double the wires, one can imagine the God of War Ares in its War-mode, harnessing its immense power, ready for its final Battle. Ares S 8W delivers even more power and dynamism in its sound while opening up to a wider soundstage.

As a next generation Silver-plated cable, Cadmus is designed to be one with great control. From tightening up the low end to delivering a crisp treble response, Cadmus never fails to impress.

Now with double the wires, one can imagine the Monster Slayer Cadmus in its fight stance, aiming for the final precise lethal slash. Cadmus 8W is more dynamic now, delivering an outstanding bass punch with a more open and detailed treble.

Get one from here :

I didn’t receive my units with retail packaging so assumed Effect Audio will put the cable inside the Chamber case and ship it as a bundle but I was told that these 8W cables will retain the exactly same packaging as the 4W version. Same case and everything while the Chamber case tags along separately. I do think the 4w carry pouch will be a tight fit for these 8W cables but who knows, it might be a bit bigger.

Cadmus 8W as the name suggests uses 8 cores of 24AWG Premium UP-OCC Silver Plated Copper Litz multi-sized cores. This SPC cable looks as good as the Cleopatra II, you can imagine where it stands in quality. While the Cleopatra II isn’t exactly supple and has some memory problem, this is much softer to touch. Its internally braided wires look equally captivating too.

Ares S 8W has 4 cores of 24awg UP-OCC pure copper LITZ inside. It doesn’t have much memory, which is an improvement over the Ares S 4W and is slightly more supple and slimmer than the Ares 2+ (Man.. I just love the Ares 2+). Compared to the Eros S, this is still a bit on the stiffer side.

There is a down side to the 8W build, and you guesses it right.. The cable guides are thicker and a bit stiffer. Even when the cable too has gained twice the weight it doesn’t feel odd.

P.S. If you need Term-X you can place a custom order, Effect charges extra $50-100 for this depending on the cable.

Signature series is all about performance and these 8W versions are taking the sound quality up a notch. If you want to read in details about the 4W version please head here. Both the Ares S and Cadmus were some of the best cables one can buy but if you feel you need more character without moving away from the stock signature and even more of same attributes, going for the 8W versions of these cables make a lot of sense.

I paired both these cables with a handful of IEMs. Aural definition Pro 5 and Dunu SA6 are the analytical IEMs while the Axiom and Fiio FH9 are the V shaped IEMs. My overall observations are based on these IEMs and what I will do is highlight the improvements over the 4W versions.

One common improvement for both the cables is the stage, its nearly 25-30% in every direction.

I don’t know why but I felt the Ares S 4W was a bit more balanced than its copper counter parts but this 8W version is in line with what copper cable are supposed to bring to the table. It is warmer and a bit fuller than the SPC cables and pairs exceptionally well with analytical IEMs bringing a bit more stability and level headed presentation. It doesn’t deliver huge bass body but brings better roundness and smoother impact, pairing well with a bit hard or edgy sounding IEMs. The biggest testament is the sizeable well rounded bass I am able to extract out of my Aural Definition Pro 5 which is a flat analytical IEM.

The best thing is this cable barely tries to affect the rest of the spectrum, yes, it manages to control any kind of sharpness without breaking a sweat but if the IEM has a peak it doesn’t flatten that, you will get a good feel of that but the harshness is curbed. Something I love is the accuracy and precision of the mid range. Mid range instruments are slightly in the V but vocals pop with high quality texture and details. Both the tonality and timber are natural and slightly on the smoother side.

Even when Eros S was the flagship, the cable that impressed me the most from the OG Signature series was the Cadmus. I love the mid range and the mid forward nature of this cable impressed me the most and the 8W version brings even more attributes to this signature. To be truthful, this 8W is a bit less mid forward but brings in a lot more information into the mix. It’s like listening to a mid forward Evo 10. Loving this signature is easy. I love the extra bit of bite and definition with the vocals. While the 4W is a bit cushy and forgiving this 8W is a lot more revealing and exposes minor deformations in mastering. Its still is nowhere close to the Cleopatra II but I wasn’t expecting this much of technical capabilities from a cable at this price.

As usual, Cadmus is not bassy but still has good amount of slam and punch, but if you need more weight opt for Ares S or Eros S. Treble isn’t in focus but still maintains excellent transparency while reducing the energy a bit. While the 4W was good with sonics this 8W is sublime at thins, thanks to the extra transparency and details this cable impresses me even more. Lovely, superb.

This isn’t something we are used to, this is more like a organizer for proper audiophile. It can carry as many as 6-8 cables and a DAP too. This is the only thing one needs to carry to a audio meet. The best thing about this case is thanks to Velcro straps one can easily re size the compartments easily. This is a complete package for most of us. $99 to carry our uber-expensive cables and IEMs is close to nothing.

Effect Audio is on a roll. It feels like they are refreshing their whole lineup but this Christmas special deal is something really special and is available in limited quantity only. One can see this deal in two ways, either the chamber case is free or this 8W cable is considerably cheap. Any way both these cables are highly capable and are worthy of upgrading. They do bring a bit more of their own while retaining the essence of the 4W versions.

If you were looking for high quality cable for your analytical IEM go for the Ares S, it brings a bit more calmness. Go for the Cadmus for your V shaped IEM, this will give the mid range a boost while bringing out a lot of details.

Hope this was worthy of your time. Enjoy!!