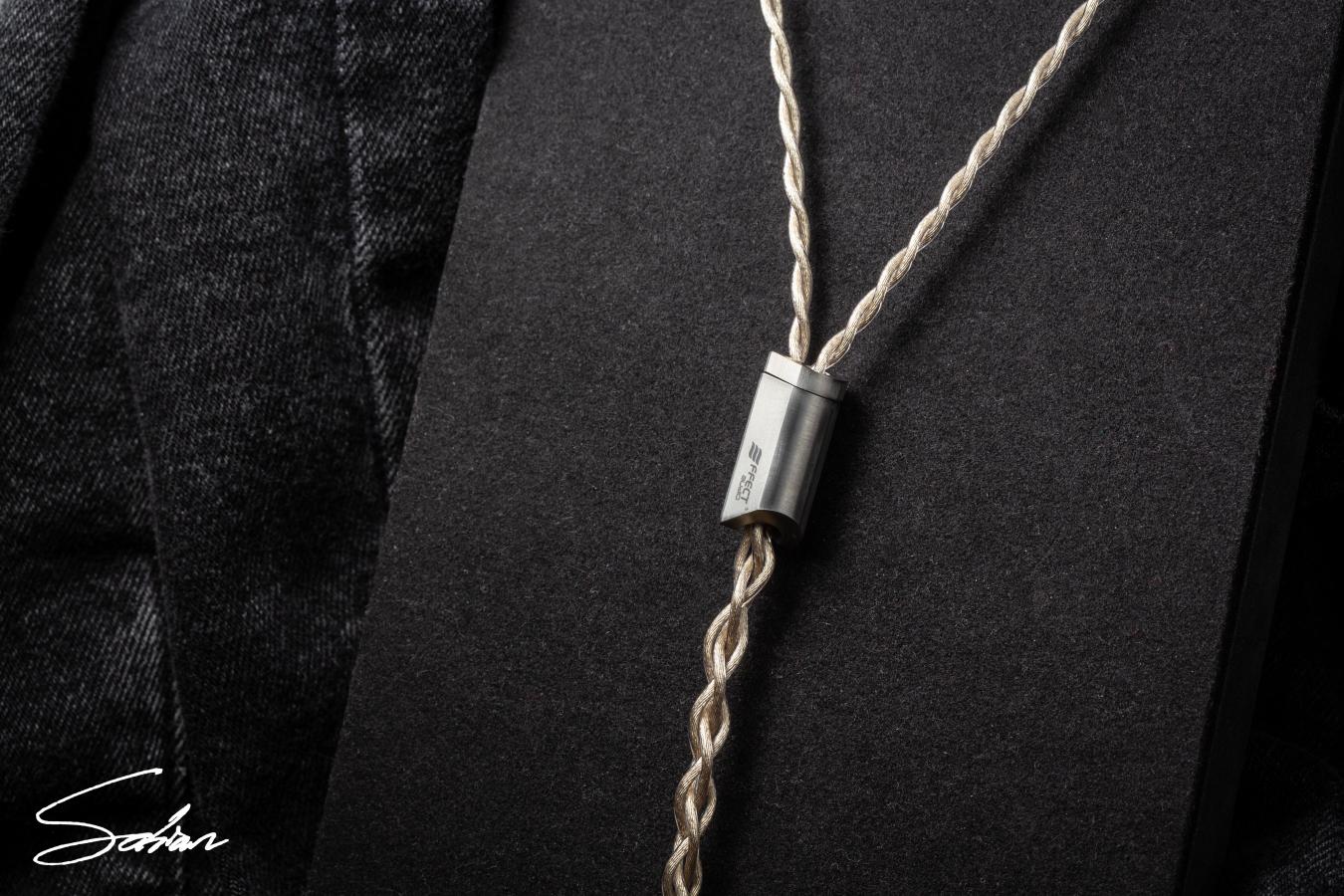 DISCLAIMER: Effect Audio provided the Code 51 in return for my honest opinion. I am not personally affiliated with the company in any way, nor do I receive any monetary rewards for a positive evaluation. I’d like to thank Effect Audio for their kindness and support. The review is as follows.

Effect Audio is one of the most renowned cable makers on the globe. Since their inception, they’ve embodied boutique in a way few others have, whether it be their exceptional ergonomics, peerless hardware or their – at times – startling price tags. Above all, however, performance is something they most consistently deliver as well, and the cable we’re looking at today is the epitome of all four. The new, top-of-the-line Code 51 takes 24 AWG of the world’s finest silver, palladium and gold to deliver an amalgam of physicality, dynamism and space in ways – and at costs – only a mere few dare to achieve.

As they often do, Effect Audio have gone a bit further with accessorising their latest flagship. Every purchase of the Code 51 comes with its own carrying bag. On one side of the bag is Effect Audio’s logo. And, on the other is Code 51 embossed in a cobalt-blue, abalone-like material. We’ll find the texture again on the product’s actual packaging, which is a great use of visual continuity. Though it’s nothing outrageous, it’s still a nice little touch hinting at the cable’s exclusivity and luxury.

Now, this box itself is made up of the same textured material as the ones Effect typically package their Bespoke creations in. Although I would’ve preferred they come up with a unique scheme for their flagship offering, it’s not a dealbreaker at the end of the day. The only differences between this box and the Bespoke ones are height and – again – that cobalt-blue Code 51 logo embossed on top. Inside the logo are little, mosaic-like segments that shimmer in light, which makes a neat contrast against this all-gray aesthetic. All in all, it’s a fairly minimalist box that imposes itself through size instead of flair.

Lifting the lid open, you’ll see its contents split in three compartments. Uppermost is the cable itself, posed in a way that makes it resemble a necklace, or a piece of jewellery. As stunning as it is, I do take issue with how Effect have chosen to present the Code 51. Because of the pose, the conductors are actually being tugged and pulled rather strongly inside. As a result, it’s left some residual memory – or bends – within the braid, especially by the IEM connectors. While Effect have put a guide on how to reset the braid in the owner’s manual, it’s obviously not something you’d like – or should have – to do with a luxury product. That being said, without even doing the reset, mine did gradually straighten after a week or so, simply through gravity pulling down the Y-split. But, again, it’s not ideal, so I hope Effect keeps this in mind for the future.

In the next compartment, you’ll find the aforementioned owner’s manual, which Effect have curiously decided to present almost like flash cards. I would’ve preferred a booklet-style format over this, and it would’ve been a great opportunity for Effect to showcase their decorative chops as well; a leather cover on the booklet, for example. Nevertheless, this manual does pack in a fair amount of information; from the conductors’ make-up to proper maintenance. These are queries that typically find themselves on online forums, so it’s clever of Effect to preempt this with the manual. Here too lies the Code 51’s warranty information, as well as a message to reach Effect’s e-mail should you require any sort of technical support.

In this compartment, you’ll also find transparent insulating stickers specifically for 2.5mm terminations. If you own a DAP like Astell&Kern’s AK240SS, this sticker – applied around your player’s 2.5mm socket – will prevent the plug’s metal barrel and the DAP’s metal chassis from touching. This is done to prevent shorts, protecting your cable and IEMs. The final item in the compartment is a metal Code 51-branded badge. It’s a nice collector’s item that I presume will age nicely over time.

At the very bottom of the box lies the Code 51’s final accessory: Effect Audio’s signature, puck-style leather case. This has been a staple of theirs since their original Leonidas, and the Code 51’s features a brand-new, all-black colour way. To me, the scheme nicely fits the cable’s industrial aesthetic, and the blue stitching on top perfectly echoes the cobalt-blue hues we’ve seen on the box and the carrying bag. Again, this is beautiful visual continuity. As always with Effect, the leather is of utmost quality with a flawlessly smooth feel. The underside of the lid also features Code 51 and (what I assume to be) your specific serial number embossed in a striking metallic silver; a really neat detail, and a sophisticated case all-round.

Now, I do have one qualm with this case, and it isn’t the failing of the Code 51, necessarily. Whenever companies launch a new flagship, there’s an inevitable, underlying expectation that it must exceed the previous one in every possible way; Effect Audio’s most recent flagship release being the Horus. So far, the Code 51 has definitely been at least on par with it in most respects, but the case is – to me – where the Horus is miles ahead. The Horus’s artisan leather case was beyond breathtaking; a level of craftsmanship above the norm, and fitting of its elite price tag. By comparison, the Code 51’s just doesn’t come off as wondrous as the Horus’s did; missing a touch of flair, and lacking that level of artistry. It’s a fine case on its own, but with the Horus as context, it does feel like a missed opportunity to go even further. But, at the end of the day, Effect shouldn’t take this as critique, but a reminder of what’s expected of them because of their own high standard.

Cosmetically, Effect Audio continue to prove why they’re one of the very best in the game. The Code 51’s raw, industrial aesthetic is a departure from their usual, prim-and-polished affair, but one that’s been impeccably executed all the same. The titanium hardware sports a gorgeous, brushed finish that runs throughout the entirety of the cable. The connectors on both ends have textures that almost look like micro-veins running through them, revealing themselves in light. That’s then accented by Effect’s logo engraved directly onto them for a look that will last. The conductors themselves are a very light shade of gold with a more matte finish to them too; not as lustrous as the Cleopatra, for example. Regardless, their UltraFlexi insulation remains as transparent as always, providing a crystal-clear view at those conductors bundled within.

Obviously, however, the star of the show here is that titanium Y-split. Those brushed, micro-veins on the connectors are amplified here, and the resulting mechanical, almost steampunk look is absolutely stunning; a statement piece without a doubt, and one of my favourites from Effect thus far. The Y-split features a unique shape to it as well; almost monolithic in structure. This is then flawlessly matched with the cable’s neck cinch, fusing flush with the Y-split when run all the way down. Admittedly, I initially assumed the cinch would be designed more for fashion than actual, practical use. But, to my surprise, it actually works really well. In my tests, the cinch stayed firmly in place, even when walking, head-bobbing, etc.

Now, if you’re concerned about the Y-split’s weight, you’ll be pleased to know that it’s very reasonable. It isn’t vanishingly light per se – a touch heavier than Effect’s usual affair – but it’s barely noticeable in use. It’s only marginally heavier than most of the 4-wire cables I’ve used in the past, and it’s surely lighter than any of my 8-wire ones. So, as is always the case with Effect, the Code 51’s hardware is as striking as it is practical. I love the look and feel of it, and I’m sure many will too.

As far as the wires are concerned, being 24 AWG, they’ll be a bit less silky than you may be used to with Effect. They don’t necessarily have that float-y quality to them as much as most of their other 4-wire cables do. But, at the end of the day, it is a necessary compromise of the design, and Effect’s reliable UltraFlexi insulation still keeps them as pliable and flexible as possible, regardless. Still, despite all this, the cable handles fairly well in use. Any memory it has smoothens out rather quickly, and the UltraFlexi – as it always does – has a very supple feel as well. Though, again, it’s not as vanishingly light as Effect’s other 4-wire, non-+ cables, never is it stiff or unwieldy either, which is a testament to Effect’s material choice and build. So, even at 24 AWG, the Code 51 remains as comfy as ever atop your ears; flagship listening that does not intrude.