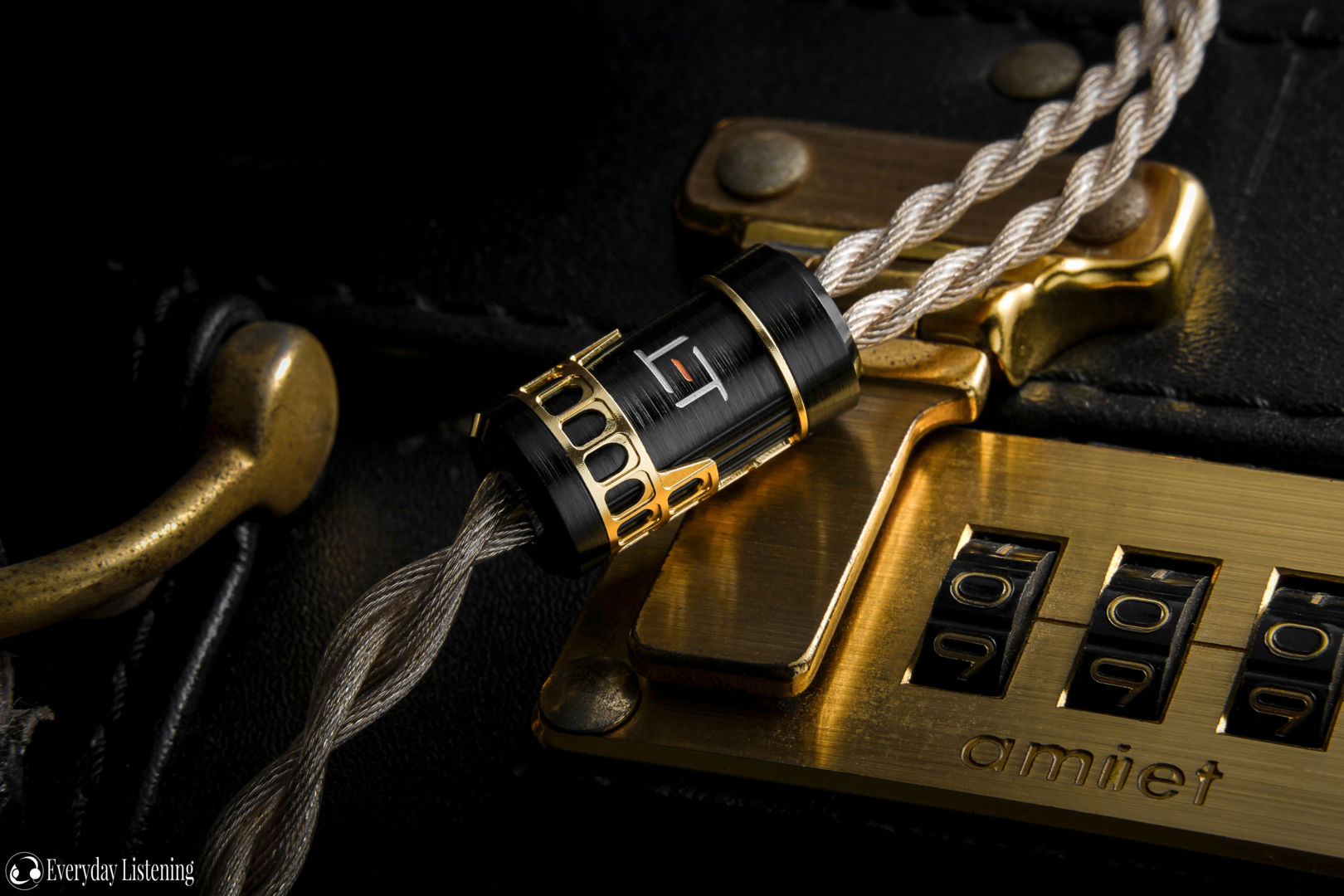 Plussound Copper+ Apollonian ($1049): The Copper+ is a closer competitor to the Socrates, though I didn’t have the PPH cable on hand at the time of review so this will stand in as Plussound’s co-flagship. The Copper+ has a warmer, bolder bass presentation. It is more powerful, slightly deeper reaching and harder-hitting overall. Though it is more dynamic and textured, it is also a little woolly and soft around the edges relative to the Aeneid. The Eletech cable is faster and more defined, being cleaner at the cost of power and note weight. The Copper+ continues this trend into the midrange. The Aeneid is slighty fuller and more coherent sounding with a more complete note structure. The Copper+ rather has an uptick of contrast, with a little more warmth from the bass counterbalanced by a slight upper-mid enhancement. I found the Copper+ to have similar separation as the Aeneid and slightly more delineated layers. It has slightly higher contrast and sounds slightly more articulate.

The Aeneid is more detailed and resolving of fine detail. Small nuances come through clearer and note definition is higher. The Copper+ has a slightly more present and even lower-treble with the Aeneid having a smoother character. I found the Aeneid to once again be the more technical option, having more bite and higher note definition. Though the Copper+ is a touch more detail forward, the Aeneid is more resolivng of fine detail. Above, I was astounded by the cleanliness of the Copper+ background which is one of the cleanest I’ve heard. The Aeneid is also clean but has a bit more air and greater sparkle that give trade some of this off for greater energy and headroom. The Copper+ has similar soundstage proportions but is scaled back slightly in terms of size. Imaging is more holographic and multi-dimensional on the Aeneid, it has sharper positioning. The Copper+ has slightly more delineated layers and a cleaner background.

Satin Audio Zeus ($1399): The Zeus is using a more complex conductor array with GPS, Palladium plated silver and silver-gold alloy. It shares a 24AWG construction but isn’t as soft as the Aeneid nor is the build as refined – though the company has updated their design since my unit was reviewed so take this with a grain of salt. The Zeus has a more vivid and coloured sound with more bass presence, a higher contrast midrange and a more pronounced top-end. Down low, the Aeneid provides a keener note attack, the Zeus a bit more sub-bass slam and a fuller mid-bass punch. The Zeus has a little more texture in the mid-bass while the Aeneid is faster, tighter and more defined. The midrange is fuller and slightly more present on the Aeneid. It is slightly more resolving of fine detail and with a more coherent and textured note structure.

The Zeus has higher contrast and clarity alongside slightly better separation with a less present lower-midrange and a bit more upper-mid lift. It has a smaller vocal and note size and layers are more delineated. Though clearer, I didn’t find it quite as nuanced as the Aeneid. The treble is slightly brighter on the Zeus, mostly around the middle-treble. The Aeneid has a sharper note attack, its lower-treble has a bit more bite and body too, delivering better fine detail retrieval. The Zeus is airier and sounds more open, its background isn’t as clean but it does have more energy. The Zeus has a little more width but noticeably less depth than the Aeneid, sounding less multi-dimensional. It is also well-layered, preferring greater contrast between foreground and background over the hyper-accurate localisation of the Aeneid. The Zeus has higher clarity, but the Aeneid has better separation overall due to its cleaner note presentation.

Eletech Iliad ($1799): The Iliad is Eletech’s former flagship and employs a similar 24AWG, 4-wire construction alongside a more exotic silver, palladium plated silver and gold-silver alloy configuration. The Iliad represents to me an utmost even-handed listening experience, with a surprisingly minimal tonal shift. It has a slightly leaner sub-bass relative to the Aeneid counterbalanced by a smidge of additional mid-bass fullness. I find the Iliad to sound a touch more defined and separated despite its additional warmth, where the Aeneid is slightly more weighted and deeper reaching with a thicker note presentation. While it isn’t as concise and articulate in the mid-bass, the Aeneid offers a more dynamic and robust image with greater range. The Aeneid has a slightly more intimate midrange, and it retains that more robust voicing here too with bigger vocals and notes. Its notes are more structured and resolved slightly better, discerning greater textural nuances. The Iliad is a touch more layered and separated, it discerns between layers better more specifically. The voicing is a touch more revealing in the upper-midrange, but it isn’t on the explicitly revealing side either.

The treble presentation is similar on both but achieved in different ways. The Aeneid is smoother in the lower-treble, sounding more refined and having a more natural note body. Conversely, it has a sharper transient response, resulting in great detail density and providing the ability to discern fine textural nuances with aplomb if at the cost of raw separation. The Iliad has a perceptibly softer note attack, making its notes sound daintier and more delicate. However, it has a crisper lower-treble tuning bringing fine details forward. In so doing, it doesn’t sound blunted nor detail deficient in the slightest and separation and clarity are both enhanced relative to the Aeneid. However, this is to the detriment of body and texture. Both have a cleaner, dark background and neither are especially airy or sparkly. Rather, they prioritise a focused and complex detail presentations in the foreground. The Aeneid provides a slightly deeper stage while the Iliad has a slight width advantage. The Iliad is also more separated while the Aeneid has more layers and slightly sharper positioning.

Effect Audio Code 51 ($2388): The Code 51 is Effect Audio’s former flagship preceding the new Centurion and is positioned similarly to the Aeneid. It features a similar 24AWG, 4-wire setup with gold-plated silver, silver-gold alloy and palladium-plated silver hybrid conductors. The Code 51 provides a more revealing and slightly higher contrast tonality with a more weighted sub-bass and articulate treble. Sub-bass is a touch lifted on the Code 51 and it shares a similarly strong extension and assertiveness, delivering a superbly tight bass note attack. It has slightly more note weight and excellent dynamics. The Aeneid is a touch more separated and defined in the mid-bass. Though not as dynamic, it is just as fast and organised, and slightly more articulate. The midrange presentation demonstrates a similar trend. The Code 51 is slightly higher contrast, being more separated and less roomy compared to the Aeneid. Alongside a greater articulation in the treble region, it has a slightly cleaner presentation and is more revealing with higher note definition. The Aeneid sounds slightly more mid-forward yet simultaneously manages to delivers larger, more coherent and more structured notes.

Though the Code 51 has more delineated layers and is more revealing, I do think the Aeneid has the edge when it comes to resolving fine details within the midrange itself. The Code 51 has a more open and revealing top-end. It has a crisper lower-treble and a more vibrant image overall. It’s not a bright cable in isolation but a clear contrast to the smooth, refined Aeneid. The Aeneid has a slightly more defined note attack which means definition matches the Code 51. The EA cable has better separation, however, and resolves fine details slightly better which is compounded upon by its more detail forward tonality. Above, the Aeneid provides a darker, cleaner background while the Code 51 has greater air and sparkle. I would give the Code 51 a slight lead on resolution, the Aeneid focusing more on tonality and its technical proficiency coming in the form of a more focused, detail-dense foreground over huge energy in the top octave. The two are well-matched in terms of soundstage expansion, the Code 51 has better separation while the Aeneid positions slightly better across its lateral plane.

Eletech set out to redefine the standards of premium design and deliver a technical yet versatile sonic experience. I’d say they’ve achieved just this, and with great success. This means improvements across the board relative to their past offerings with regards to the unboxing experience and even build quality, whilst still paying tribute to their core thematic. I must also applaud the way Eletech have realised such an ambitious design, I’m sure this was far from an easy development process. In listening, I was very impressed by the combination of qualities the company were able to instil into one coherent package. The bass performance is hugely addictive; characterised by assertive attack, excellent punch and cleanliness through control over attenuation. The top-end too showcases extreme tonal refinement without sacrifice to extension or fine detail retrieval due to the lift in note definition and top-octave presence.

This is the crux of the Aeneid for it is not an especially coloured cable but a technical one, so it isn’t the most instantly impressive listen as something like the more engaging Zeus. I do think the full and forward midrange will limit pairings most as quite a few high-end monitors do have a midrange focus these days. The majority, however, tend to be W-shaped, higher-contrast affairs. In turn, I did still find the Aeneid to be one of the more versatile cables I’ve tested and easily one of the most impressive from a technical point of view, as you’d expect from a cost is no object flagship. This is where some contention comes into play as though I am always a fan of innovation and pushing the limits of performance, it is difficult to stomach constant inflation. In this sense, the Aeneid does hit harder than most flagship cables, but also at an even higher price point. If you do have the luxury of purchasing this cable, expect unmatched opulence and a listening experience accomplished in equal measure.

The Aeneid is available from Eletech (International) for $2399 USD at the time of writing and in the configuration tested. I am not affiliated with Eletech and receive no earnings from purchases through this link.