DISCLAIMER: Empire Ears provided me with a discounted price on the Phantom in return for my honest opinion. I am not personally affiliated with the company in any way, nor do I receive any monetary rewards for a positive evaluation. I’d like to thank Empire Ears for their kindness and support. The review is as follows.

Empire Ears are on their way to becoming a household name. The family-run enterprise – formerly known as EarWerkz – have been putting out hits for years, including the venerable Legend-R average_joe reviewed in 2015. But, they’ve only recently broken into the mainstream with their statement piece behemoth; the 14-driver, switch-clad Zeus-XR. Looking to ride that momentum into the proverbial sunset, Empire Ears have taken 2018 by storm, putting out two brand new lines of in-ears tuned with a think-tank-like collective of industry pros. Headlining the EP (Empire Professional) line is the Phantom: A revelation in tonal transparency; one of the most natural, sophisticated and refined in-ears I’ve ever heard. 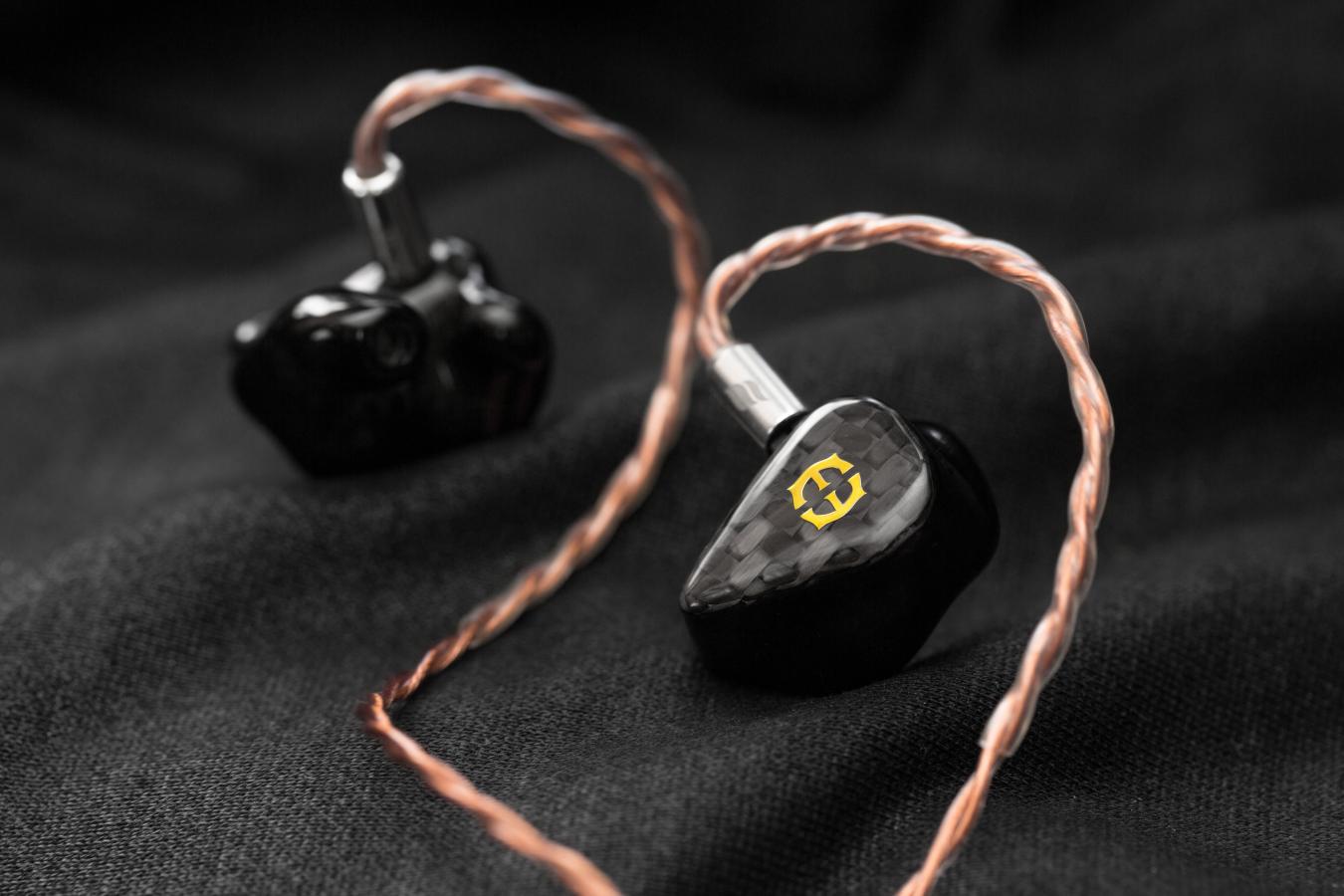 Among the myriad of in-ears I’ve reviewed over the past year, Empire Ears clearly have the best-packaged ones of them all. The Phantom comes in an uber classy, onyx black box – complete with the company’s Bentley-like logo glimmering on top and a magnetic strip lining the latch below. Lifting the lid reveals a quick start guide, small and large fabric pouches, a branded micro-fibre cloth and Empire Ears’ personalised Aegis case. Within the case are the in-ears themselves, the default Effect Audio Ares II cable and an included cleaning tool securely set within foam cut-outs. Although I wouldn’t mind replacing one of the pouches for a mini semi-hard case, this is surely a package as complete as I’ve ever seen one. 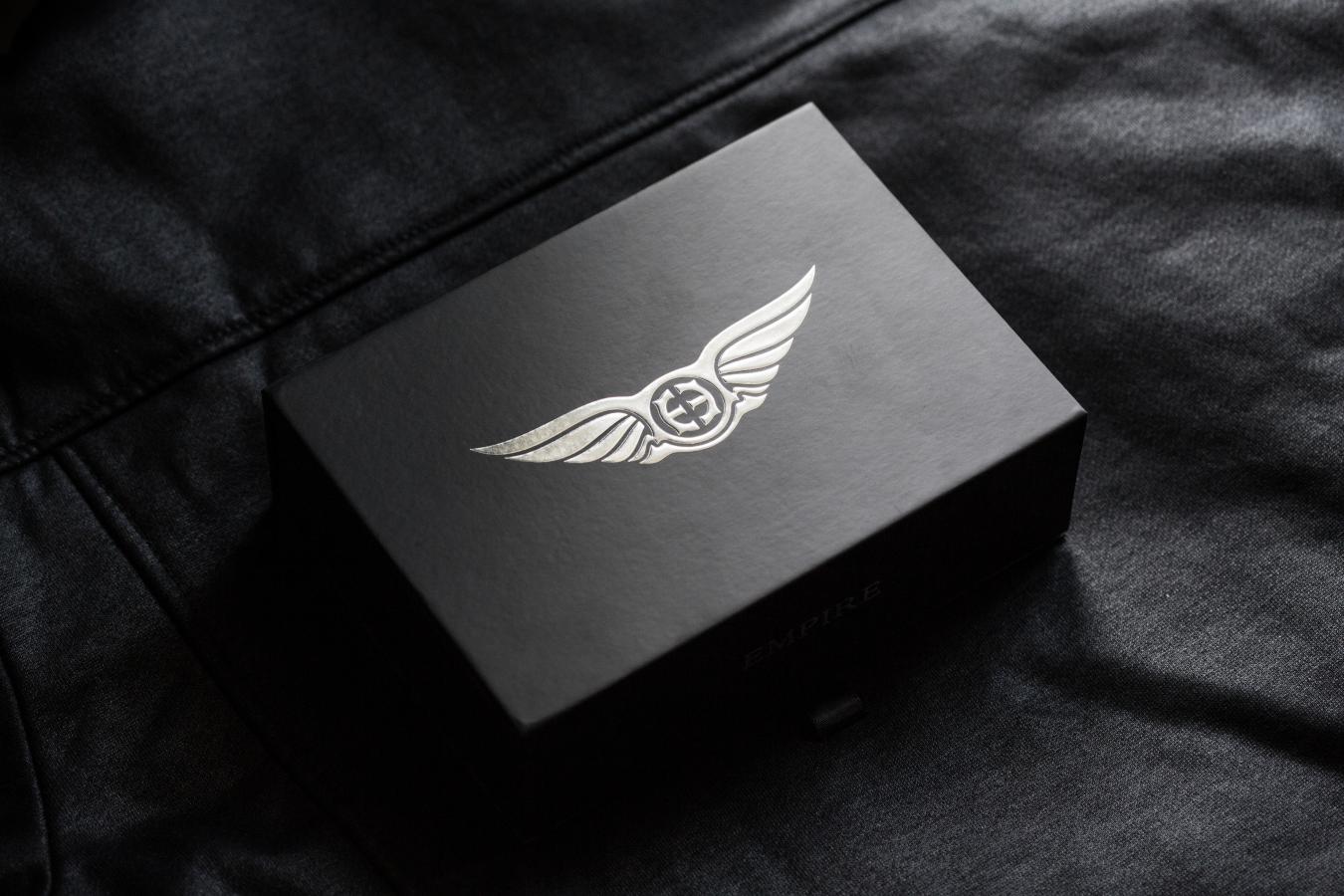 The provided Aegis case is a touring musician’s dream. A black, fine-textured finish shrouds the enclosure, topped with an engraved, aluminium faceplate and two tenaciously robust clasps. Density and weight throughout the vault suggests a great degree of durability, without sacrificing look or feel. The one complaint I’ve heard online is the narrow profile, which may inadvertently cause pressure on the in-ear monitors when mispositioned. A face-down seating position is required. But overall, Empire Ears’ Aegis case possesses a suaveness that all but telegraphs the quality sitting within. 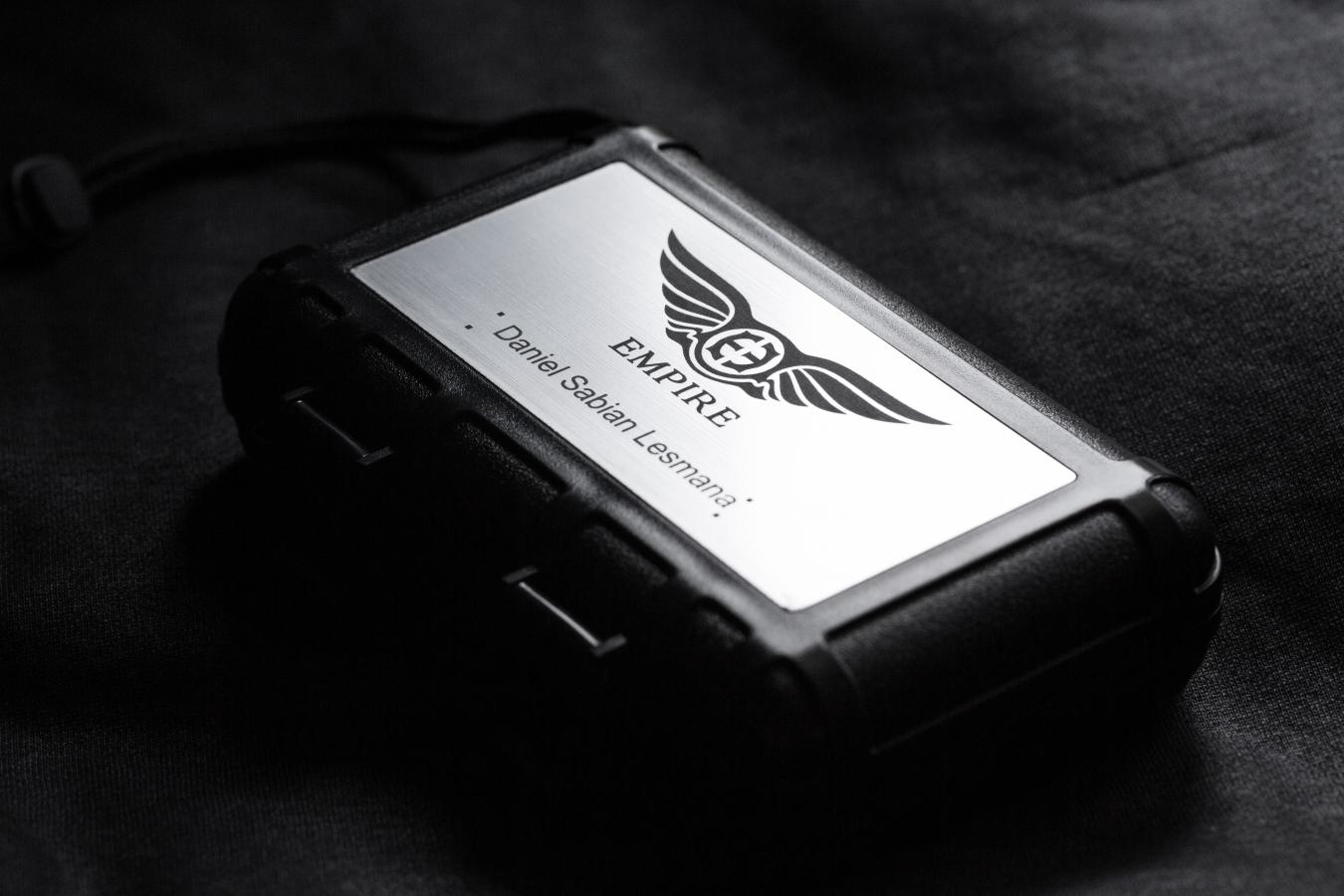 When customising your Empire Ears custom in-ear monitor, you’re given the option of 29 shell colours (21 standard and 8 glitter) and a whopping 62 faceplates. The latter consists of the 29 colours that are available in shell form, in addition to multi-coloured swirls, wood, carbon fibre and multi-coloured graphics – almost like vinyl on a race car. On top of that, you’re also given the option of adding Empire Ears’ logo in gold or silver, a field of Swarovski crystals or your own custom artwork that you can submit on their online designer. Although the tool isn’t as sophisticated as JHAudio’s (which allows the user to rotate the designs in a 3D space), it’s on an equal plane as those from 64Audio, Custom Art and Vision Ears. 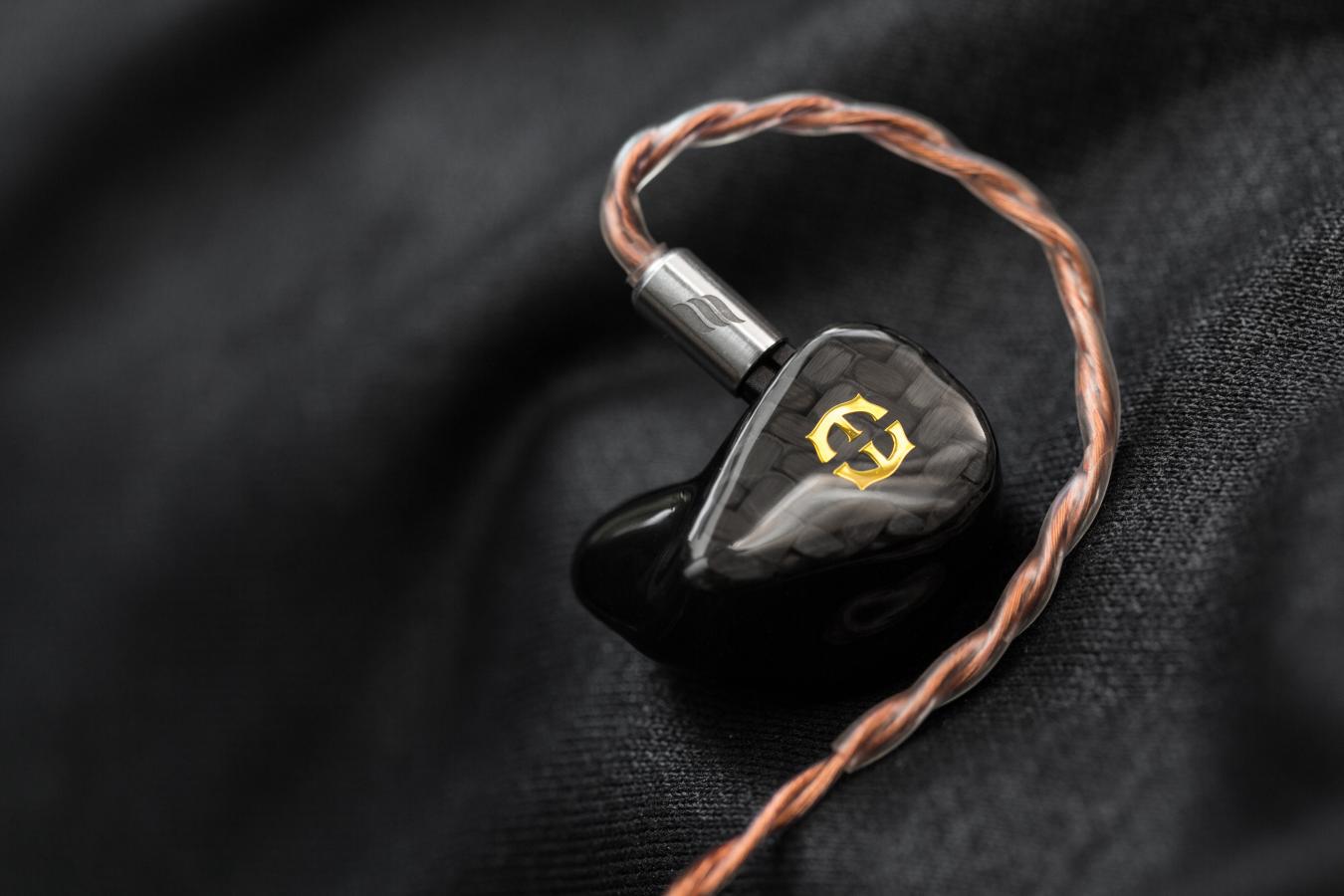 In terms of build, cosmetics, comfort and isolation, the Phantom ticks all boxes with ease. My personal pair came in onyx black with carbon fibre faceplates and gold emblems; emulating the class and luxury a high-end in-ear monitor should. And, nowhere is that more clearly reflected (besides in sound, of course) than in finish. The monitors are evenly and illustriously lacquered with neither a bubble nor a rough edge in sight. Even the horn bores – notoriously difficult areas to get clean – are flawlessly structured with utmost finesse. In the ear, they’re vanishingly comfortable – balancing pressure and ergonomics better than a large majority of my collection – and they isolate very sufficiently as well. 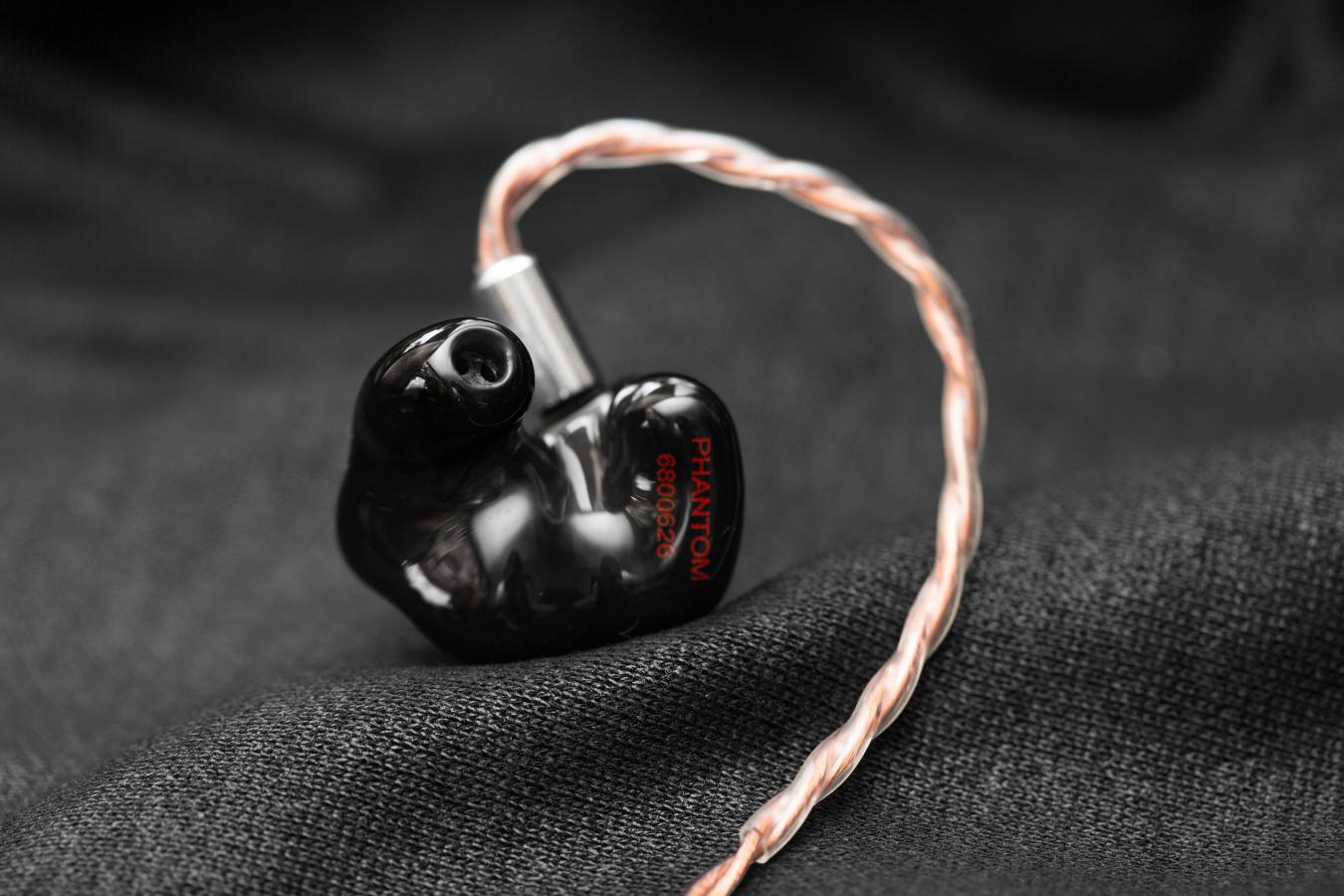 Finally, as mentioned, Empire Ears includes Effect Audio’s acclaimed Ares II wire as the in-ear’s stock cable. Relative to other Effect Audio cables I’ve owned, the braiding isn’t as uniform and silky – probably so because the’ve had to keep up with massive demand. But, they still exude infinitely more quality than most stock options in the industry today.

synX is a proprietary crossover system developed in-house by Empire Ears, which they claim designates more individual audio bands per driver than any other crossover technology currently in existence. In essence, it splits the load across more transducers, so that they possess more headroom and – therefore – lower distortion. This is especially true when you wish to apply any form of EQ. You’re allowed more leeway to push certain frequencies before the drivers begin to operate outside of their comfort zones. This is useful for me as a sound engineer, if I were required to use EQ for – say – a mixing console with sub-optimal output impedance, a specifically coloured audio player, etc. In addition, Empire Ears claim synX improves stereo separation, phase response and SNR, through handpicked resistors, capacitors and filters.

A.R.C. (Anti-Resonance Compound) technology is comprised of two separate parts existing inside and outside of the balanced-armature drivers. The first is ferrofluid that they’ve implanted between the magnets and the armatures within the drivers. What this does is dampen the driver sufficiently, such that it removes any unwanted distortions, peaks and vibrations, whilst maintaining a crisp, clear sound. This also eliminates the need for a damper in the sound tube. The second part is a proprietary coating that they spray on every component of the IEM – including the drivers, crossovers, tubes and shells – to add solidity; acting as – again – a damper to remove any resonances that may render them out-of-phase. Empire Ears claim increased clarity, deeper bass and an overall more efficient monitor as a result of A.R.C.