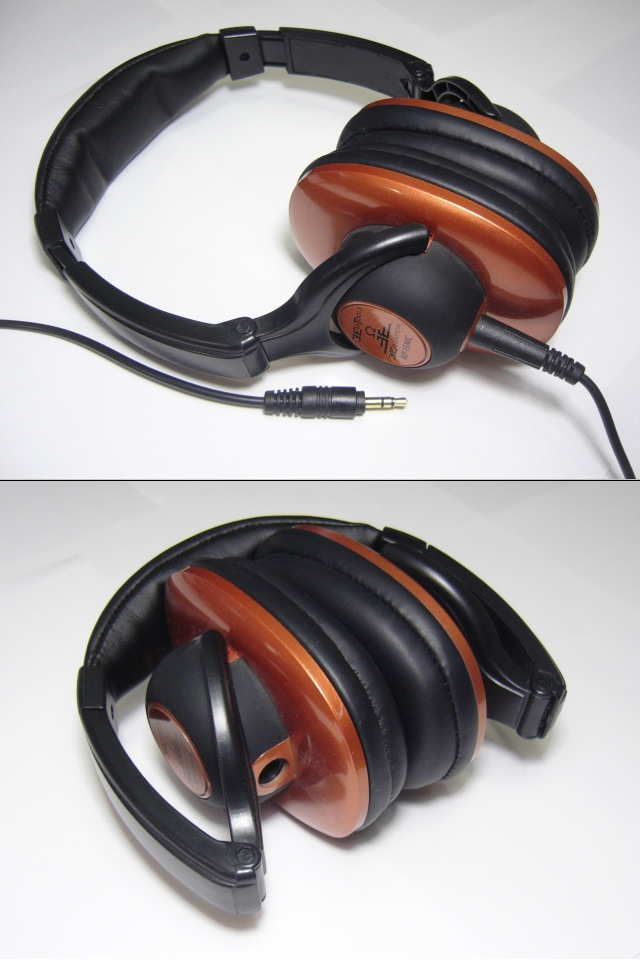 Brief: The smallest and cheapest headphone in Equation Audio’s EarTools line, the RP-15 is designed for audio professionals in need of a rugged and portable solution for mixing and tracking.

Build Quality (7/10): Easily the most striking aspect of the RP-15MC is metallic orange paint, which they share with the higher-end RP-21. The paint gives the otherwise plastic RP-15 a touch of class. The headphones look and feel sturdy but not bulletproof. The molding of the plastics isn’t perfect and most of the frame is plastic, including the hinges. On the other hand the locking detachable cable is quite robust and can be replaced with an M-Audio cable or perhaps even a DIY solution should something go wrong – a big plus for me.

Comfort (5.5/10): Though Equation Audio calls the RP-15MC circumaural, they can hardly be considered such in the traditional sense. The elongated cups are very nearly large enough to encapsulate my ears but the pads are far too shallow for a proper circumaural fit. Clamping force is quite high and there is no rotational freedom to the cups. As a result, the RP-15MC is painful for me to wear for more than two hours at a time. The (lack of) comfort is very similar to the AKG K81Djs, which score a little bit higher only because their 3D-Axis system makes their fit more adjustable. It should be noted also that the RP-15MCs are not for those who like to wear their headphones around the neck when not in use.

Isolation (7.5/10): The isolation is good but not great. The soft pads and hard clamping force give the RP-15s a lot of attenuation potential, which is subsequently canceled out by the fact that the cups just aren’t deep enough. They still attenuate a good amount but with deeper cups and slightly more directional freedom they could’ve been competition for the K81Dj/HD25-1 when it comes to isolation.

Sound (6.5/10): Though Equation Audio’s entire EarTools headphone line is designed for professional use, it’s hard to imagine that the sound signature of the RP-15MC makes them well-suited for serious production work. Like the AKG K81Dj, the RP-15MC are bass monsters and lean slightly towards warmth and darkness. The bass is extremely hard-hitting and the 38mm drivers can move lots of air on the right tracks. Listeners of club-type music will undoubtedly be enamored with the way these present low notes. For those who like extremely tight and controlled bass, one of the higher-end Sennheiser portables or the Beyer DT235 may be a better fit.

The midrange of the RP-15 is slightly forward, unlike that of the similarly bass-heavy AKG K81Dj. It is surprisingly detailed and very smooth – not a hint of harshness or sibilance is present.  Vocals are placed front and center and the overall presentation is extremely engaging – these are definitely a front-row tap-your-toes of headphone. This is accentuated by the intimate presentation which at times can sound downright condensed – there is very little space between instruments in the way the RP-15 positions them. The treble is accurate and smooth but slightly laid-back in character and devoid of sparkle and air. This makes the already-intimate signature sound quite closed. Though the RP-15s do carry a certain pleasant depth to their sound, they sound noticeably stuffy when compared to a more spacious-sounding headphone (the ATH-M50, for example).  On the upside, the Equations are extremely forgiving of low-bitrate tracks. If I had to recommend a headphone specifically for 128kbps mp3s, the RP-15 would very likely be it. But even for properly-recorded tracks, the little Equations are fun and engaging little portables.

Value (8/10): Retailing for around $50 online, the RP-15MCs are a surprisingly handsome and very well-rounded headphone. Closed, collapsible, and well-isolating, they are a practical option for those who don’t mind a bass-heavy sound, competing directly with the AKG K81Dj and JVC HA-M750. Like the K81Dj, the main weakness of the RP-15 for me is comfort, or rather lack thereof, which is caused by the hard clamping force and shallow cups. For music lovers whose listening sessions rarely go over two hours, the RP-15MC are definitely worth looking into.