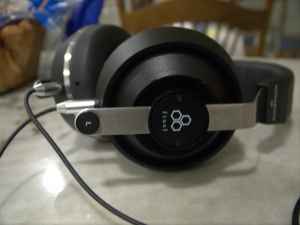 Final Audio Design is a Japanese company that goes its own way. It has a following on Head-Fi, who wax poetic describing their gear. My first exposure to them was the Heaven V iem, which went with a single BA when other manufacturers were adding more and more drivers, and making hybrid BA/dynamics in ears. I also purchased a Pandora Hope VI (now named Sonorous VI), which also had an original, unusual design. It was a hybrid of a dynamic and a BA driver ( common now in iems, but I don’t know of any others in over ear headphones). The latest introductions are the Sonorous III, which is part of a series of over ear headphones using technology designed for the $3,999 Sonorous X, which, again, seems to be an FAD original design, using a proprietary driver and an unusual, stippled plastic for the cup. This results in increased rigidity and thus better fidelity according to FAD.

The driver and front plate are integrated into one unit, along with other innovations, resulting in better sound, according to FAD.

My  initial impression was positive-they looked very much like the younger sibling of the Sonorous VI, with less of the metal trim, but shaped basically the same. The technology is different, though, the VI using a BA/dynamic hybrid, while the III uses the above scheme, trickled down from the X. The unusual shape, with the headband flaring out to meet the cups, is identical. The III is a bit lighter, though, and that makes it more comfortable. It also doesn’t have the problems with the adjustment mechanism sliding on its own that my VI has (which I’ve read is common to the VI); when adjusted to my head, it stays as I wanted it. Packaging is sparse; utilitarian cardboard packaging, adapter for ¼ inch gear (the cable is terminated with a 3.5mm mini jack) and that’s it, no case, no other niceties (this is in contrast to the much more expensive VI, which came in a fancy, fur lined hatbox). This is a minor issue, of course; fancy packaging gets dumped fairly quickly (though a case for a portable headphone would be useful). 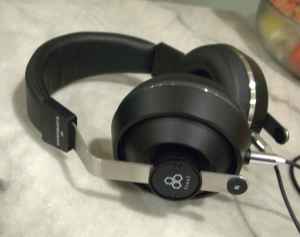 I don’t do much listning to music from a phone (more now since I got the HTC 10, which is a very good sounding phone, and works well with the III), so I went to my go-to portable player, my Pono, which is my most used  piece of audio gear (which makes it the best bargain I’ve gotten). I pulled out some other headphones for comparison, the Shure 1540, the FAD Pandora Hope VI (FAD changed the name from Pandora to Sonorous to avoid confusion with the streaming site. The headphones are unchanged), and the Fidelio X1. Later I “borrowed” my wife’s Sennheiser Amperior as well (don’t tell…)

First track was a wonderful version of “Skylark”, from Charlie Haden-Jim Hall, Live from Montreal Jazz Festival, Canada 1990 (24/96 HDTracks download). The presentation is dry, clear, with a close “in head” perspective, giving a good feel of instruments and space, with deep, tight bass. Mids are very well presented, with Jim Hall’s wonderful guitar tone beautifully captured. By comparison, the higher priced spread, the 1540 and the Heaven VI, were a bit more distant from the stage, did present more “air”, space between instruments, and body to the instruments, but the III acquitted itself quite nicely. The Fidelio had a “wetter” tone, less open, and was harder to drive, and the Senn had a richer, lusher tone, but the bass was flabbier, more diffuse, and overall presentation was less detailed, with a bit of a haze over the sound. Next I cued up “Ghost Riders in the Sky”, from Roswell Rudd’s facetiously  named Trombone for Lovers (16/44 rip to FLAC from CD), featuring one of my favorite artists, Steven Bernstein on slide trumpet. The III sounds really open, with both great transient attack and harmonic subtlety. The Bass bounces and is tight, but I’d say a bit less in amount than on the other cans. Rudd’s trombone is captured in its rich tonality. Bernstein’s slide trumpet has the appropriate bite, and they are floating in a rich, organ bath. Percussion has snap, and the stage is wide (though not too deep again). The Fideleo trades the width for more depth, but smears everything subtly, losing some fine detail and open space. Moving to the Shure, it is less sensitive, presents a bit more stage, wider and deeper, bass has a bit more body and punch, but seems a bit “slower”, while still having good pace, surrenders the lead on this to the III. How about the VI? Does what the III does well, and builds, with a somewhat more natural, relaxed feel, more depth, more “roundness” to the images of the instruments. To hear some vocal music, I went to Lynard Skynard’s “Sweet Home Alabama” (24/192 FLAC download), I was struck with the same impressions, with the III presenting wide stage, not deep, great clean open sound, and more openness and drive than the Fidelio. The multiple guitars are standouts, and it sports one of the all-time great rock guitar solos. I picked it to focus on vocals, and they were presented well, with rich lead and chorus (but close up), but the guitars grabbed me, along with the great presentation of the highs, with clear cymbal sound, with snap and bite. The higher priced spread gets you more depth and body, but the III comes darn close with the ability to bring you in.

To see how it scales up, I connected to my PC system (LH Labs Lightspeed 2G cable, LH Labs Revive, LH Labs Geek Out Signature Edition (V1), MicroZOTL2 amp. I got tickets to see Richard Thompson solo acoustic, so, as a warm up, I clicked on “Dawning of the Day” (Acoustic Warrior, FLAC rip from CD). The III has me right in front of RT, his rich voice close up, fabulous acoustic guitar playing tight, focused, and beautifully delicate. The Shure is more distant, less textured and involving. The Philips is a bit closer, and pretty similar on this track. The VI is again close, with the vocal richer, guitar more in space, background more open, and more real and involving presentation than them all. Switching to some jazz, “Dancing for Cigarettes”, from Michael Zerang’s Songs from the Big Book of Love (CD FLAC rip), has aggressive energy with a Middle Eastern rhythmic lilt, and full tilt blowing. On the III, the sax swung, the drums (further back in the mix than I’d heard from these cans up until now), bashed and crashed, bass had bounce, and my head was bopping. I went for more jazz-Herbie Hanc ock’s “Driftin’” (from Takin’ Off, 24/96 FLAC ProStudioMasters download), and it again really swung (in a funky way), wide stage, deeper than with the Pono (but still forshortened compared to the other headphones). Tonality is rich, with Dexter Gordon’s luscious sax there on the right, Freddy Hubbards trumpet warm, and buttery sound on the left (this is not usually Hubbard’s way; he’s usually more brassy and biting, but the mellow swing of the tune got to him). What really got to me is that the bass, there but with less impact through the Pono, had more body and heft through the ZOTL. Highs are also convincing; cymbals have a delicate sheen, nice decay. And Herbie is a funky monster! The X2 again had more depth, less width, slightly less clarity, and slightly less rhythmic drive (harder to drive, ZOTL volume up). The 1540 again has less width, a bit more depth, highs that are slightly rolled off compared to the III, but a more bouncy, palpable bass, which makes for a kick ass performance. (it’s $100 more). I managed to purloin my wife’s Senn again (shhhh…), and it seems flat and closed in by comparison to the III; it does many of the same things right, but when I put on the III, there’s a vividness and excitement to the presentation that the Senn is lacking. The stage of the III is more open and realistic, the instruments more exciting and involving.  The VI still is a step up (from all of these), with more open room sound, more realistic, round images of the instruments, overall more true to the music.  But, hey they’re $699, quite a few dinero more than the others in the review.  For some more vocals, I went to a fave, The Both (Aimee Mann and Ted Leo) track “Milwaukee” (16/44 CD rip): the III has a clarity that puts the vocals and instruments in more relief, makes them stand out more. Electric guitars jangle, vocals are rich and easy to separate. By comparison, the X1 sounds muddy and indistinct. The Shure gives you more bottom and depth, but loses out on highs, slightly deepens the stage while making it more narrow (but overall is also a great presentation). The Senns do nicely with the vocals, with fatter but looser bass, but also, but a bit less excitement and drive, and are a bit less efficient. The background is more congealed, more “hifi”. 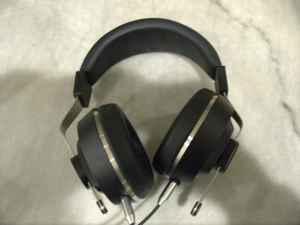 Isolation is just OK-in my quiet, suburban neighborhood, I was able to go out on dog walks and enjoy my Pono with the III, something that a completely open can like, say, the Senn 650 wouldn’t allow (I’m becoming inured to the Geek factor). Regular outside noise like traffic wasn’t a bother, though loud leaf blowers and mowers would make it hard to listen. Comfort is also middling, I’d say; of the cans discussed above, it is more comfortable (to me-ymmv) than the Amperior and the FAD VI, being lighter than the VI and having better cups than the Amperior. The X1 and the Shure, though, feel lighter and more comfortable, with less weight and clamp than the III. (I should mention here that the connector from the cable to the left cup came loose towards the end of the review, causing sound to go in and out when moved. I don’t know if it is common to the III, but a dealer would take care of this if it occurred).

Overall, I’d say the III is quite an accomplishment at the price. It gives one a taste of the detail, openness, and drive of the higher priced spread (and bears more than a passing resemblance to its older sib), at a reasonable (in these days of $4K headphones) price.