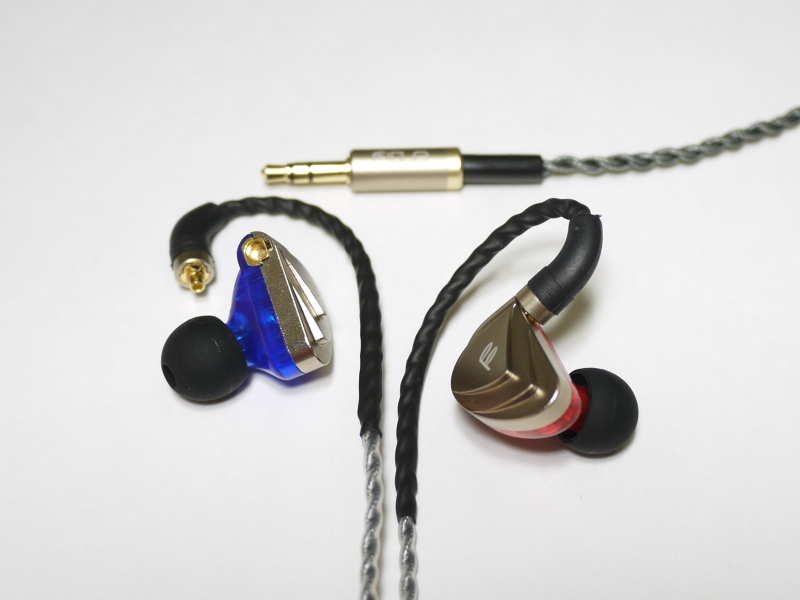 Accessories (5/5) – Single-flange (3 sizes) and bi-flange (2 sizes) silicone tips, foam tips (1 pair), 6.3mm adapter, airline adapter, Otterbox-style crush-resistant carrying case
Build Quality (4.5/5) – The look of the A83 might take a bit of getting used to, but construction quality is excellent. The metal faceplates comprise the most prominent design element and give the housings a very solid feel. The detachable cables utilize MMCX connectors modified to stop them from rotating, which is something I found slightly annoying with a few other MMCX earphones such as the Shure SE535. Fidue does this using an extra pin on the outside of the connector. This results in the A83′s cable being incompatible with other MMCX earphones, but other manufacturers’ cables will still work with the A83. The quality of the stock cable is excellent and the connectors at the earpiece end are angled to facilitate over-the-ear wear. The only thing the cable lacks is a cinch, but with the memory wire it’s not really a must-have
Isolation (3/5) – Average due to somewhat shallow fit
Microphonics (4.5/5) – Very low in the twisted cable
Comfort (4/5) – The A83 uses an ergonomic housing design and is worn over the ear with the help of memory wire and angled cable connectors. It’s not a small earphone, but it is relatively lightweight and the shape, which reminds me of the Sennheiser IE7, manages the size well

Sound (9.2/10) – The Fidue A83 is a dynamic + dual BA hybrid earphone that improves on the design – and the sound – of Fidue’s dynamic-driver A81 model. Like other triple-driver hybrid setups, it doesn’t suffer from a lack of bass impact. However, aside from the warm and smooth Sony XBA-H3, it is the least v-shaped and arguably the most balanced of the hybrid IEMs I’ve tried. The overall balance of the earphones did benefit a good amount from a tip switch – the best results I got were with Comply foam tips and “short” Sennheiser double-flanges.

In this configuration the A83 has mids that are not as thin as those of the DUNU DN-2000 and T-Peos Altone200 and a top end that’s not prone to harshness or sibilance. Bass quantity is above what I consider flat or “neutral”, but lower than with most other hybrids including the XBA-H3, Altone200, and even AKG’s flagship K3003 in its “Reference” configuration.

The A83 is clearly bassier than flat-sounding BA sets such as the Etymotic ER4, VSonic VC1000, and Final Audio Heaven II, but also a little less tight and controlled. The Westone W40, which is not as flat as the sets listed above, still can’t keep up with the A83 in bass impact, but the quality of its bass is closer to that of the Fidue.

The midrange of the A83 is a little warmer than neutral. It is thicker and more full-bodied than a flat-sounding IEM such as an Etymotic ER4, VC1000, or even Heaven II, but also a bit less clear. Clarity lags a bit behind the pricier AKG K3003 as well. The A83 also lacks a bit of crispness compared to these other sets, likely because it just isn’t as level across the board, but this is only noticeable when comparing it to a flatter, more accurate earphone. On the other hand compared to the warmer and darker Westone W40, the more v-shaped A83 is actually a little clearer.

The top end of the Fidue A83 carries good energy and strikes a fine balance between sounding revealing and harsh. Among the hybrid earphones I’ve tried it is the best bet for those who are worried about the warmth and bloat of the XBA-H3 being excessive but don’t want to risk the brighter and occasionally harsher-sounding DUNU and T-Peos sets. The treble here is by no means smoothed-over – it just avoids some of the harshness and sibilance of the hybrid competitors and even flatter-sounding earphones such as the VSonic VC1000 and Final Audio Heaven II, which tend to have more treble energy. However, this also costs the A83 some crispness in comparison to those. The Westone W40, on the other hand, is less bright and even more forgiving. At the end of the day, the A83 is a compromise between the brighter sound of many other hybrids and the purposely smooth sound of something like the Westone W40.

The A83 has a very unique presentation, with impressive width and depth but a somewhat diffuse sound. The soundstage is spacious – surprisingly so, in fact – but the slight lack of crispness leaves the presentation a bit vague. Still, it a little more out-of-the-head than even the AKG K3003, which has a more “conventional” with more coherent soundstaging and better imaging.

VSonic’s dynamic-driver GR07 is, by and large, a balanced-sounding earphone, and sounds quite neutral next to the more v-shaped A83. The top end of the A83 is highly tip dependent but tends to be a little brighter and more energetic overall. With the stock tips it can be more sibilant than the GR07, but with my preferred eartips it is actually smoother and less sibilance-prone than the VSonic unit.

The bass of the GR07 seems a bit deeper. This is likely due to it having less of a mid-bass hump to draw attention away from the sub-bass, rather than due to actually having more depth. In the midrange, the A83 sounds both clearer and a little more full-bodied than the GR07 – an impressive feat. It also has a slightly more 3-dimensional presentation with better depth and is quite a bit more efficient.

The T-Peos Altone200 is close to the Fidue A83 in performance but offers up more bass and brighter treble for a more v-shaped sound signature. The bass of the Altone200 digs deeper and delivers more of both impact and rumble, though it is also a touch more boomy. The A83 is more neutral and a little more natural-sounding, though I can definitely see the more colored sound of the T-Peos being preferable with some genres (such as EDM), thanks in large part to the juicy bass. The mids of the A83 are not as recessed while the Altone200 has a thinner and more withdrawn midrange. The clarity of the T-Peos is much more striking, due in part to the Fidue having thicker mids and lower overall treble energy, though the A83 is also smoother and less sibilance-prone.

DUNU’s original triple-driver hybrid makes for a good contrast to the Fidue A83. Though both earphones follow v-shaped sound signatures, they are tuned differently. The DN-1000 has deeper bass with noticeably more slam. The A83 has more neutral bass quantity, but actually sounds a little warmer thanks to a slightly larger mid-bass hump. It is also a bit thicker and more full-bodied in the midrange, though the more v-shaped DN-1000 seems a touch clearer. The highs of the DUNU unit are less forgiving while the A83 has smoother treble (probably its biggest advantage). That said, the A83 sounds a little less crisp and coherent, but more spacious, whereas the DN-1000 offers a slightly more congested sound.

The A83 and DN-2000 are both high-end triple-driver hybrid earphones that, to my ears, differ most in presentation, with the A83 having a more out-of-the-head sound and appearing a little more distant and diffuse, and the DN-2000 sounding more focused, but also a bit more closed-in. The Fidue set carries less emphasis in the sub-bass region and more in the mid-bass region, which actually makes its low end sound a little more integrated into the overall sound. The midrange of the DN-2000 is a little more recessed but the A83 is lacking in the way of crispness in comparison. The A83 also tends to be a little less forgiving up top, though it falls closer to the smoother DN-2000 than the lower-end DN-1000 in this regard.

Compared to the Sony XBA-H3, the Fidue A83 boasts a brighter tonal character and sound that’s more balanced overall. The XBA-H3 has more bass impact at the expense of greater bass boom whereas the A83 is both lighter and more controlled at the low end. The mids of the A83 are slightly clearer, but also thinner. The XBA-H3 has a more full-bodied sound but also appears a bit more veiled/muffled in the midrange. The Sony is smoother, too, while the A83 is brighter and less forgiving. Surprisingly, the A83 has a slightly more spacious presentation than the XBA-H3, which is already very impressive in this regard.

Value (8.5/10) – The Fidue A83 is a triple-driver hybrid earphone with sound that combines impactful, yet well-measured bass with mids and treble that are less recessed and more forgiving, respectively, compared to other earphones of this type. The overall sound is slightly v-shaped and not 100% neutral, but punchy and enjoyable. The earphones are also very well made, with the plastic-and-metal housings and good-quality detachable cables covering all the bases. Indeed, there’s a certain thoughtfulness and attention to detail permeates all aspects of the A83, from the packaging onward, enhancing the user experience. Wearing comfort for the ergonomic-fit housings is also quite good. I do wish there was a mic cable included, as with the less expensive A81 model, but for the price that would simply be too much good stuff.