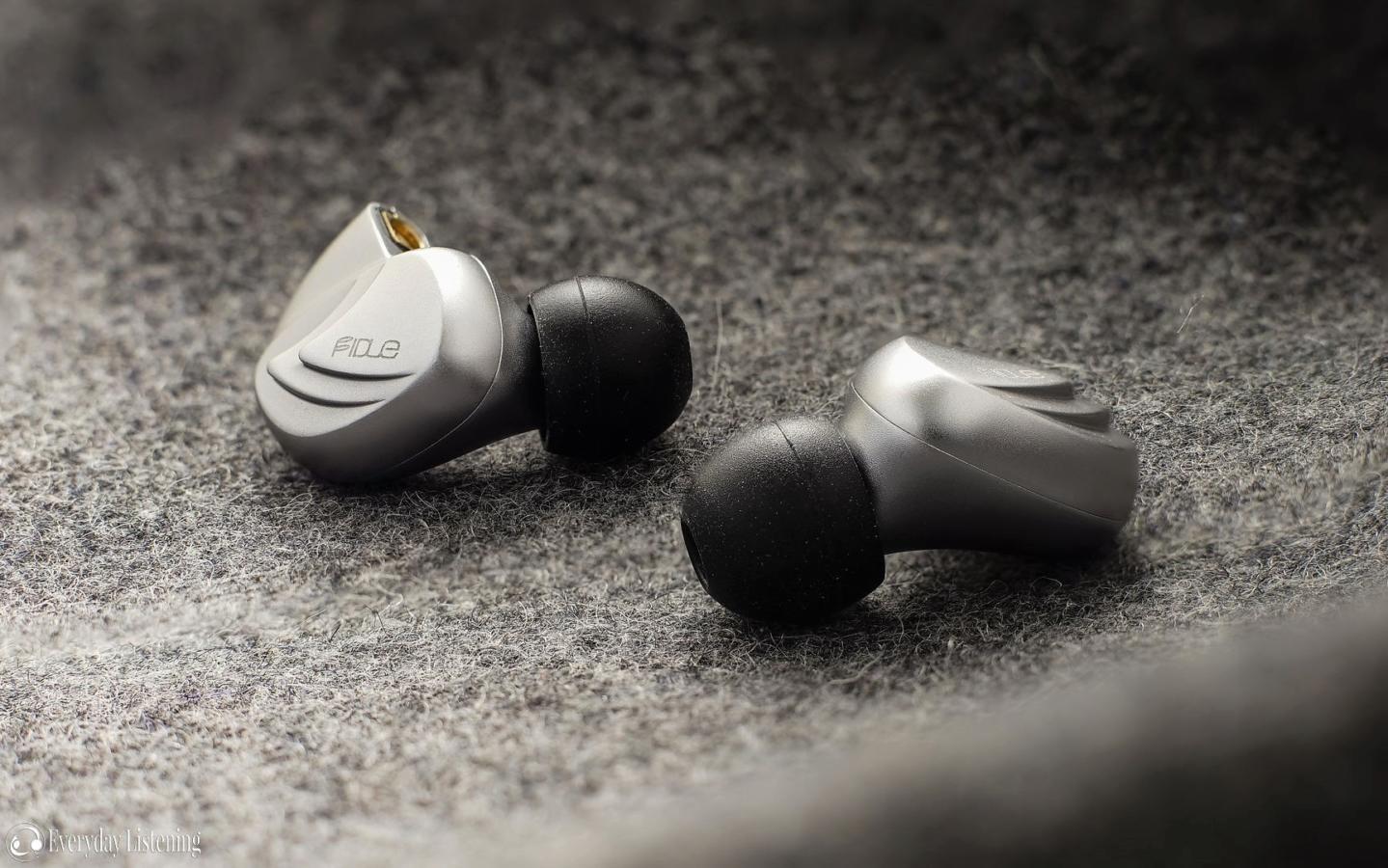 The Virgo has an upper midrange-forward signature combined with a smooth yet well-extended treble response. It’s a presentation teeming with lucid clarity on behalf of its cool tone and brighter tuning. However, Fidue have well compensated through attenuation of treble to avoid sibilance and by lifting sub-bass to retain low-end presence without warming its tone. Though the Virgo cannot be considered a balanced, natural or remotely realistic sounding earphone, its sound is unique and represents a mature example of its style of tuning.

Low’s don’t drive the sound but extend very well and deliver a full-bodied presentation. Sub-bass has hearty emphasis combined with strong extension that delivers a concise impact and impressively defined rumble. This is paired with slightly elevated but even mid-bass that produces enlarged bass notes and a sense of fullness without rounding or obvious bloat. The A85 doesn’t have an explicitly warm or organic bass tone as a result, with a greater focus on sub-bass kick at the very bottom. Upper-bass is attenuated by comparison, leading into a cool but well-separated midrange.

Though it never holds the spotlight, the Virgo provides a naturally toned bass presentation and one that demonstrates a very respectable level of control. Decay is accurate and bass is tight, keeping pace with faster tracks. As such, though fuller than neutral, the Virgo’s low-end remains well-separated and nicely defined if smoother in texture overall. It’s a detailed, punchy low-end that never becomes drowned out within the Virgo’s more upper-midrange focussed sound, though some finer details do become overshadowed by the higher frequencies. This isn’t a bass-head earphone, but it’s hardly anaemic, with weightier bass well-balancing an otherwise brighter, cooler tuning.

The Virgo’s midrange is distinctly bright, clear and revealing without presenting as overly artificial. This is instigated by a recessed lower-midrange/upper-bass that delivers a lean (but not hollow) portrayal of instruments and male vocals while permitting a very clear, clean overall image. With a steady rise into a heightened upper-midrange, clarity is a prime strength as are female vocals that are brought to the fore. This makes them especially well-suited for jazz and Asian genres, delivering enhanced separation and a very pristine presentation. The earphones possess a cooler tone throughout their midrange that is partially redeemed by enhanced bass weight. As such, though timbre is not lifelike, they remain quite naturally voiced.

This is reinforced by the smoother nature of the Virgo’s treble response that enables well-articulated vocals while upholding unrelenting clarity and an upper-midrange focus. Male vocals are slightly laid-back and can lack some substance, the Virgo’s thinner nature making them a little temperamental with albums of various mastering quality. That said, sibilance is a non-issue on account of their smooth treble. Ultimately, they’re not over-done, gradual in emphasis, detailed and reasonably well-layered. Its atypical tuning may require some adjustment coming from other IEMs, especially warmer ones, though the Virgo flatters the vast majority vocals with a revealing listen.

Smooth and unfatiguing, the Virgo’s relaxed delivery of high-frequency detail lies superficial to its higher resolving power. One can initially posit that the Virgo’s highs serve to reinforce the midrange rather than draw their own focus, a sentiment that is only partially correct. In fact, extended critical listening reveals that the Virgo is a very well-detailed earphone. It’s natural but crisp with slightly organic instrument body due to its combination of enhanced upper midrange and attenuated but evenly metered lower-treble. Middle treble is similarly laid-back, producing a clean and tightly-woven presentation with rather subdued air.

On the flipside, top-end extension is quite good, with hints of sparkle imbuing its presentation with energy without compromising composure. I found the Virgo to excel with acoustic, despite lacking aggressive attack, every strum sounding well-bodied and natural. Similarly, other instruments such as cymbals and strings were flattered with a stable foundation paired with smooth, refined over-tones and mostly natural decay. Resolution is very pleasing, contributing to the Virgo’s expansion and separation. Though it’s fairly mellow in its expression, the Virgo doesn’t sound blunted or uninspiring, but smooth and mature.

The Virgo has a very spacious soundstage with excellent width and especially strong depth. It stretches beyond the head with expansion aided by great treble extension and a laid-back background that exacerbates their sense of space. Imaging is also quite impressive, instruments are easy to locate though layers aren’t quite as organised as more balanced in-ears. Despite this, separation is very good, especially with regards to their midrange on account of their thinner notes. Though not absolutely accurate, the Virgo is immersive and expansive with great delineation during busier tracks despite their smoother tuning.

With a 20ohm impedance and 107dB sensitivity rating, the Virgo is easily driven to high volumes from portable sources. That said, the Virgo is fairly source sensitive, becoming significantly darker from sources of high output impedance. This is especially detrimental to its sound quality as the Virgo already has quite a smooth treble response. Though upper-mids are actually more accurately positioned when attenuated, the Virgo sounds blunted and closed. As such, a source of low output impedance is essential. Beyond output impedance, the Virgo is also resolving enough to take advantage of a dedicated source, chiefly a slightly more revealing one. This may sound counterintuitive, though I find brighter sources such as iBasso’s DX200 to derive their brightness from treble rather than the midrange. As such, sources such as the aforementioned DX200 serve to even the transition between upper mids and treble, elevating detail presence and enhancing air.

Oriveti New Primacy ($300): The New Primacy is a more balanced earphone on account of its more neutral midrange placement and slightly crisper treble that better counterbalances its slight bass emphasis. The Primacy lacks the sub-bass depth and power of the Fidue but is more linear through its mid and upper-bass, producing a more full-bodied presentation. It’s also slightly warmer as a result, though it’s quite a clean sounding earphone in the grand scheme of things. The New Primacy has a more natural midrange mainly due to its more neutral lower-midrange and less forward vocals. It lacks the same clarity, sounding considerably darker than the bright Virgo. That said, it’s slightly more articulate on account of its clearer treble tuning. Chiefly, the New Primacy has a little more lower-treble that produces crisper instrumentation and slightly more aggressive detailing. Neither excel with air or extension though the Virgo has a little more energy at the very top where the Primacy pursues a very clean, dark background. The Virgo is considerably more spacious than the Oriveti, but it lacks the same instrument placement and layering.

Cardas A8 30th Ann. ($350): Cardas provide a fuller, meatier sound with their A8. It has class-leading sub-bass extension combined with large emphasis, more than the Virgo. Moreover, its mid-bass is similarly lifted, granting a warmer, thicker low-end. However, as its bass presentation is mostly linear and impressively controlled, the A8 doesn’t sound wonky or overly muddy. Still, it’s a lot warmer and fuller than the Virgo and its midrange is less transparent as a result. The A8 has a full-bodied midrange with a little upper-bass chestiness, the antithesis of the Virgo. That said, the A8 has a slight upper-midrange lift so it never sounds veiled, and vocals are well-placed if slightly laid-back. This contrasts greatly to the brighter and more revealing but also less natural Fidue. The A8 has a slight lower-treble presence bump that imbues its sound with a little more energy. Like the Virgo, it doesn’t excel with air and it lacks the same level of treble extension. Still, both produce large soundstage presentations, the Virgo is once again, more expansive while the Cardas has more wholly resolved notes with greater coherence.

Jomo Haka ($400): The Haka is a warmer, fuller earphone with a similarly relaxed high-end. It lacks the same sub-bass extension and emphasis as the Virgo but provides a tighter, faster presentation with a little more definition. It has a little more mid-bass and greater upper-bass/lower midrange presence, creating a warmer, fuller image. The Virgo sounds a lot cleaner and clearer while the Haka is fuller, more natural and grounded in its voicing. In fact, the Haka has a slightly attenuated upper-midrange producing very smoothed off, yet still natural vocals, but also a little veil especially compared to the upper-midrange forward Fidue. The Haka has a fuller high-end instrument reproduction, it’s slightly less linear and detailed but also a little crisper where the Fidue is smoother. Neither have great air or shimmer, though the haka extends similarly well. The Haka has a significantly smaller stage though it’s not claustrophobic. The Haka layers a little better as it has a more neutrally positioned midrange and more resolved notes. That said, the Fidue has superior instrument separation.

Acoustune HS1503AL ($400): The HS1503AL is tonally similar to the Virgo but realised through a more engaging v-shaped signature. Though both extend very well, the HS1503 is more mid than sub-bass focussed and its low-end sounds warmer and fuller as a result; with the Virgo sounding cleaner with less bloat and greater definition. That said, the HS1503 has more upper-bass/lower-midrange so though it’s still a thinner, cooler sounding earphone, it sounds a little more natural than the Virgo. The HS1503AL is similarly bright, with more of an upper-midrange focus. That said, it’s not lifted to the same degree as the Virgo, sounding a little more laid-back through its entire midrange. Furthermore, as its lower-treble is considerably more emphasized, the Acoustune is a lot crisper and more aggressive in its detail presentation. Its midrange is also more articulated with the Virgo sounding a lot smoother. The HS1503 has a lot more air up top and extends further, it has more resolution and energy. Both have large soundstages, the Virgo is more expansive due to its more laid-back background while the Acoustune layers a little better.

I’m constantly surprised by hybrid earphones though I feel we’ve become more conditioned by the V-shaped hybrids of old that newer offerings subvert our expectations. The Virgo exemplifies this notion as an earphone with a highly unorthodox bright/smooth signature. As it derives its brightness from its midrange rather than its treble, the Virgo achieves immense clarity without the associated sibilance and splashiness up top. Moreover, utilising its hybrid setup, the earphones provide a very solid bass response that counterbalances their forwardness higher up.

Such a tuning is very rare, reminiscent of Japanese earphones ala HS1503, but without the treble edge on top. As such, the Virgo presents as unique and refined within a class that’s usually more flamboyant. And beyond sound, few would walk away unimpressed by the Virgo’s terrific metal housings; with a visually arresting design realised through scrupulous finish. It’s refreshing to hold such a solid earphone where many competitors make do with acrylic. To restate, this is a clearly coloured earphone not for those seeking a balanced, realistic or perfectly natural sound. However,  the Virgo is smooth and spacious with an endlessly revealing midrange.