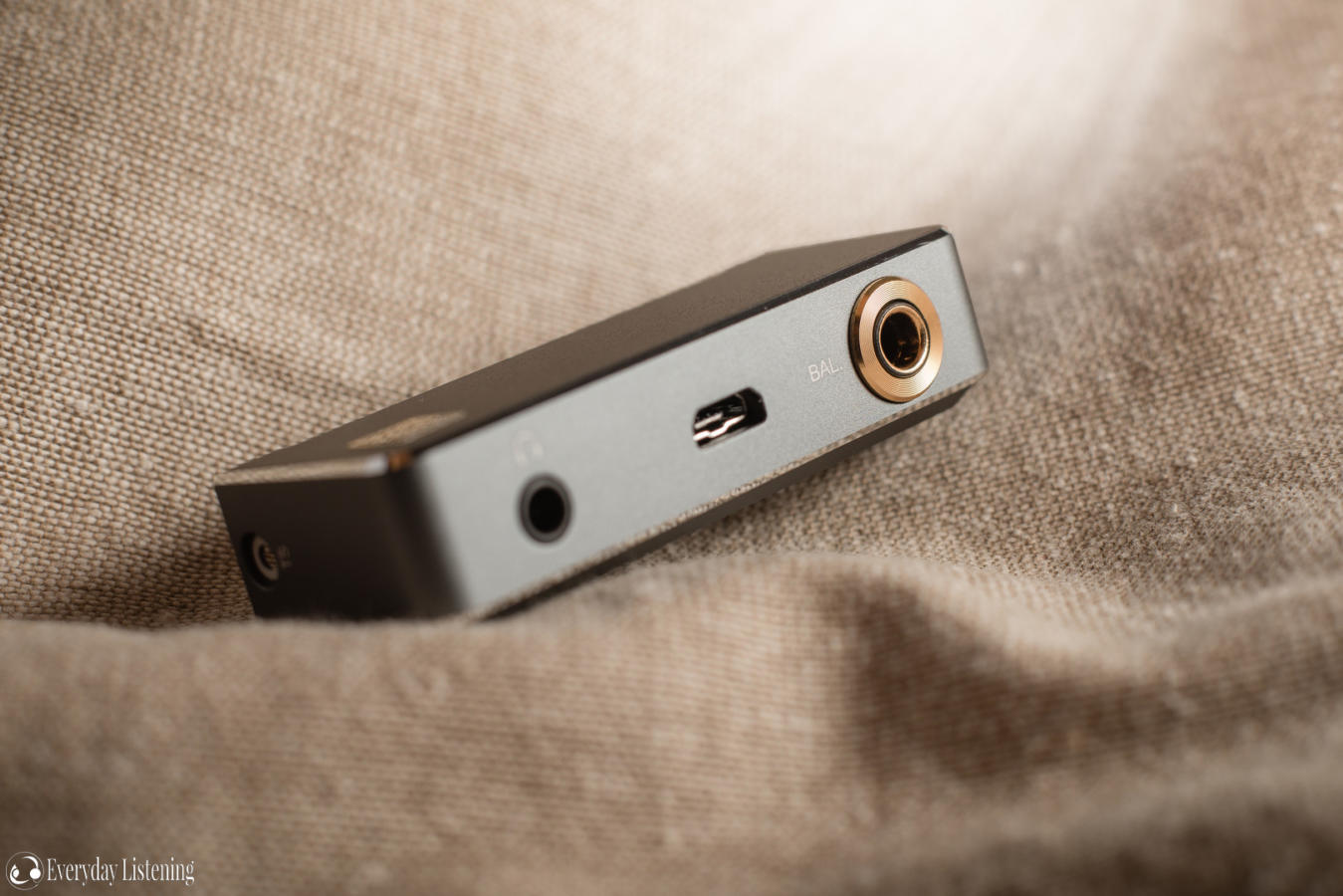 The AM3B provides the same musical, immaculately clean and nicely dynamic listen as before now with greater soundstage expansion and control.

The Fiio X7 was one of the first modular DAPs, enabling users to interchange the amplifier in order to suit various applications. The included AM1 offered a more neutral/analytical sound while the optional AM2 provided a fuller, smoother sound. Fiio later introduced the AM3 that sport a balanced output and the AM5 featuring a higher output power for high impedance headphones. With the introduction of the X7 MKII, Fiio introduced a new stock module, the AM3A that I actually found to be my favourite of the bunch as a result of its clean, dynamic and slightly more engaging sound.

With the rising popularity of the new 4.4mm standard, Fiio has released the AM3B, the 4.4mm equivalent of the AM3A with reworked internals. At a glance, it offers a noticeable increase in power, a 50% increase through the TRS out, in addition to lower distortion on behalf of a new PCB layout that better isolates the power supply and audio sections. The AM3B costs the same as Fiio’s other modules at $100 USD and is compatible with the X7, X7 MKII and Q5. You can read more about the AM3B here.

I would like to thank Lily from Fiio very much for her quick communication and for providing me with the AM3B and BL44 for the purpose of review. All words are my own and there is no monetary incentive for a positive review. Despite receiving the AMP and adapter free of cost, I will attempt to be as objective as possible in my evaluation.

The amp module resembles Fiio’s other models with the same basic housing and dimensions. It assumes the more subdued sandblasted finish of the newer AM3A over the brushed AM1. The module feels sturdy with an aluminium construction. It also seems that Fiio has tightened up the tolerances on their newer products as the AM3B fits perfectly flush with my X7 MKII, unlike the previous AM2 and AM5 that were slightly offset and differed in colour.

One element that stands out is the AM3B’s 4.4mm output traced by a bold gold outlet. It reminds of Sony’s DAPs, imbuing a premium but not gaudy aesthetic to the attached player. Fiio explains that the gold ring was necessary to accommodate the 4.4mm connector that exceeds the length of the PCB. In line, Fiio includes a new TPU case with a larger cutout for the protruding connector. I also had no issue using Miter’s X7 MKII case with the new module due to its forgiving cutout. Otherwise, the module is identical with a central micro-USB port and a standard 3.5mm output on the opposite side.

The AM3B received over 200hrs of burn-in prior to review to ensure optimal performance during final evaluation. The testing below was done using the Fiio Q5 and X7 MKII. Further specifications can be found on the AM3B’s product page here.

The AM3B is built upon the same foundation as the AM3A, utilising the AD8620, one of my favourite OPAMP chips in addition to two OPA926 chips. In addition, the circuitry is completely redesigned, now utilising two stacked PCB boards as opposed to one. This enables separation of the power supply from the actual amplification section, which should theoretically result in lower distortion and noise. With a redesigned power supply, the AM3B also has a significantly higher current output, almost a 50% increase in the case of its single-ended output. Moreover, it does so with a lower output impedance, SNR and reduced THD.

The balanced output receives similar benefits and with channel separation, in particular, receiving a notable from 97 to 106dB, a very substantial upgrade given that the dB scale is logarithmic. However, the AM3B does take one step back with regards to output impedance. While its TRS output is sub-1-ohm, which is ideal, its 4.4mm output has a notable 3-ohms output impedance, up from 1.7-ohms on the AM3A. In real-world listening, this does affect some very sensitive IEMs such as the Hyla CE-5. However, for most IEMs, the effects are noticeable but not especially pronounced.

Another interesting observation I noticed in listening was the AM3B’s higher noise floor than the AM3A. Both have a slight hiss with sensitive IEMs, however, the AM3B introduces additional noise on top. Still, it’s not experience breaking in the slightest, and unnoticeable when music is playing, but definitely something to note for some users. Neither are EMI sensitive and WiFi doesn’t introduce any extra noise either. Users are more likely to notice the increased driver control and power on offer.

Tonally, the AM3B sounds mostly similar to the AM3A besides a slightly higher volume output at every level, unsurprising given their similar circuitry. Bass is well-controlled but a touch warmer and fuller than neutral so definition is high but not outstanding. Mids are transparent with a slight attenuation of the upper-midrange creating a denser vocal reconstruction, though I hear the AM3B as being a touch more extended in this region. Treble is well-detailed, but lower-treble lies on the smoother side so it lacks the assertive attack and crispness of more aggressively detailed DAPs such as the iBasso DX200.

Instead, it pursues a smoother midrange and more organic instrumentation. The AM3 amplifiers are very clean as a result, further enhanced by their darker background. This provides defined layers and an enhanced sense of space. As upper-treble has an uptick of energy, clarity is retained and perceived resolution is high. Sparkle is also slightly more present as are micro-details. Furthermore, treble extension is strong and these amplifiers are, to my ears, Fiio’s most resolving units.

Where the AM3B makes notable strides over the AM3A is with regards to the soundstage. The X7 II has a very coherent presentation and it’s hardly a claustrophobic DAP, but it does lack expansion when compared to other flagship DAPs from competitors. Compared to the AM3A, the AM3B has a noticeably wider soundstage and its imaging is slightly more holographic, even through the standard TRS output. It maintains the coherence of the AM3 but with its enhanced space, delivers greater separation and layering.

Utilising the ie800S’ modular cable system and an SPL meter, I conducted a volume matched comparison between the TRS, 4.4mm balanced output of the AM3B and 2.5mm balanced output of the AM3A with minimal variables. As the circuitry is almost identical between outputs, listeners shouldn’t expect huge differences in sound, however, differences and advantages are apparent. Immediately, the balanced output is approximately 25% louder and it’s also louder than the 2.5mm output on the AM3A. It has very high control throughout, most notably with regards to bass.

The BL44 is a 4.4 to 2.5mm balanced adapter. It has sleek aluminium connectors with knurled edges that provide a tactile surface for removal. As opposed to some adapters, the Fiio model has an 8cm cable that takes the strain off the connectors on either end. It’s a thick wire with TPE insulation that feels immensely sturdy while avoiding cumbersome weight. With a loose braid, the cable is quite pliable and it tucks neatly behind any DAP. Sonically, Fiio promise transparency with their adoption of HPC-23T annealed high-purity copper wire manufactured by Oyaide Japan.

Comparing between the BL44 with 2.5mm ie800S cable and the Sennheiser 4.4mm cable, I noted minimal difference insinuating high transparency. While an adapter won’t ever enhance your listening experience, low-quality examples can easily ruin it. At a very reasonable $25, the BL44 is one of the cheapest ways to enable users of 2.5mm IEMs to take advantage of the AM3B, and listeners can have peace of mind knowing that it won’t worsen their experience.

AM1: The AM1 is the stock module that came with the original X7. It has no balanced output but also has the lowest output impedance and noise floor. This amp has the lowest gain and maximum volume but also minimal hiss that’s barely noticeable on very sensitive IEMs. It has a slightly cooler tone and a more reference-style presentation. The AM3B is more musical. It has more sub-bass extension and slam in addition to a slightly warmer, fuller mid-bass. The AM3B is more aggressively textured.

Its midrange has more accurate body where the AM1 sounds a touch thin and cool. Most notably, the AM3B has a denser midrange where the AM1 offers greater upper-midrange extension. Some may prefer the AM1 here as it sounds a little more open, but it also doesn’t sound quite as clean and refined as a result. The AM1 is slightly less detailed and its top-end isn’t quite as extended. It is similarly coherent in terms of imaging but its soundstage is smaller than the AM3B.

AM2: The AM2 is the AM1’s lusher, more powerful counterpart but its gain is still a touch lower than the AM3B. Its output impedance is similarly very low and it barely hisses with the most sensitive of IEMs. Its low-end sounds more similar to the AM3B. It has slightly less bass control and a smoother texture but it is still well-defined. The most notable difference is with regards to the midrange where the AM2 maintains a warmer, fuller voicing. The AM3B is more transparent, delivering slightly greater clarity.

Similar to the AM1, the AM2 has a more extended upper-midrange, lacking the same density in favour of greater openness. However, as it’s warmer, it doesn’t sound clearer than the AM3B. The AM2 also has a smoother top-end while the AM3B, itself on the smoother side, has more detail presence. Both have a clean background, the AM3B’s additional sparkle and extension help to redeem air and micro-detail however. The AM3B is more expansive than the AM2 and also more coherent, I feel that Fiio’s new AMP cards make a big stride over their past models.

The AM3B is another flexible offering from Fiio, enabling X7(II) and Q5 users to augment their rig with 4.4mm support. It’s worth considering the balanced output’s higher output impedance and the module’s higher noise floor. However, the majority of IEMs and portable headphones will have no issue in either regard. Still, users of low-impedance multi-driver earphones may experience issues such as bass-roll-off and quite typically treble attenuation, making the 2.5mm balanced output of the AM3A more suitable. Regardless, the AM3A was my favourite Fiio amp module at its time of release and the AM3B represents another step up; even if the upgrade isn’t quite as revolutionary as that of its predecessor. It provides the same musical, immaculately clean and nicely dynamic listen as before now with greater soundstage expansion and control.