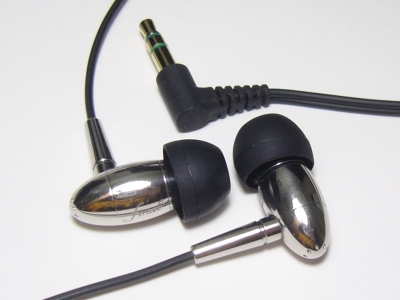 Accessories (3.5/5) – Single-flange silicone tips (3 sizes) and oversize zippered carrying case
Build Quality (4/5) – The slim, elongated shell of the FI-BA-SS is made entirely of stainless steel and reminds me, in both size and weight, of Audio-Technica’s CK100, The nozzles contain non-replaceable mesh filters and the hard stems, while quite solid-feeling, lack real strain relief. The cable is very soft and smooth but thinner than most of the cords found on higher-end earphones and slightly prone to tangling
Isolation (3/5) – The BA-SS is vented at the rear and isolates surprisingly poorly for a BA setup, though still sufficiently for use on most public transport
Microphonics (4.5/5) – Though thin, the cord is pretty much silent even in the cord-down configuration
Comfort (4.5/5) – The slim, long shells of the BA-SS are tapered on either end and quite easy to fit. Insertion depth is limited by the hard stems and the FADs are definitely on the heavy side for a set of IEMs but on the whole the fit is still excellent with the right tips

Sound (9.2/10) – If the price is the most shocking aspect of the FI-BA-SS, the sound signature definitely comes in a close second. As a fitting segue, it’s worth noting that the type of transducer used in the FI-BA-SS has apparently been the source of some contention as the promotional materials claimed a proprietary “balanced air movement” technology but a blown-up sketch of the internals showed what looks like a conventional balanced armature. The transducer of the BA-SS is indeed a single armature, but one that is vented. Except for slight roll-off at the lowest of lows, the FI-BA-SS can match the dual-driver Audio-Technica CK10 for presence across the frequency spectrum. Also worth noting is how sensitive the FI-BA-SS is to tip choice – bore opening and length seem to have a noticeable effect on the sound and especially the presentation of the earphones. I’ve had good results with narrower-channel tips such as the Sony Hybrids, Monster Single-flanges (or gel supertips), and FA Eterna bi-flanges – often with shallower-than-usual insertion. Comply tips can be used to tame the treble a bit but soak up a bit of the airiness of the FADs. As always, whether that’s desirable is a matter of personal preference – for the most part I got on just fine with silicone tips.

As noted above, the FI-BA-SS gives up a bit of bottom-end extension to multi-driver setups such as the CK10 as well as many higher-end dynamics but the bass is quite punchy. It can be said that the BA-SS is a bit less ‘stingy’ with its bass than the CK10 or DBA-02, offer healthy amount of impact. Impact falls only slightly short of the triple-driver EarSonics SM3. Texture and resolution are very good so there is not much to complain about from a technical perspective.

The midrange of the FI-BA-SS is even more interesting, reminding me of both the smooth-yet-detailed CK10 and the warmer, more liquid Ortofon e-Q5. The noticeable gain in bass impact and body over the CK10 makes the BA-SS sound warmer while retaining the crystal clarity of the Audio-Technicas.  The texture and detail levels of the FADs are very high and the resulting transparency is simply off the scale – even the CK10 sounds slightly veiled next to the BA-SS. No other universal-fit earphone I’ve heard gives quite the same sense of ‘nakedness’ to the sound – with the BA-SS it’s simply you and the track (note: I didn’t say ‘the music’ because the BA-SS is hugely unforgiving of source material; only with well-recorded, mastered, and ripped material will it be ‘you and the music’). Combined with the excellent balance of the earphones, this transparency has a strange result – the BA-SS certainly qualifies to be called a refined earphone but at the same time it’s quite aggressive and has a ‘raw’ edge to it.

Expectedly, the treble is just as revealing as the midrange and boasts equally impressive clarity and detail. Extension is impressive for a single-armature design. There is, however, a bit of treble unevenness, leading to slight harshness and even occasional sibilance. The highly transparent nature of the earphones makes them all the more sensitive to any and all artifacts already present on the track. This raises a question – is it possible that an earphone can be too detailed, too clear, and too transparent? Even among high-end earphones there are still a few that elicit complaints of poor clarity when compared to the competition, but the BA-SS clearly breaches the opposite extreme. The BA-SS is the earphone equivalent of an unretouched hi-res image – it may be the technical ideal for many, but ultimately some things are better off airbrushed, if only slightly. Either way, it is an invaluable earphone in demonstrating that, as with most things in audio, there is a fine line for transparency and that clarity and detail need to be balanced against smoothness and cohesiveness – otherwise minor imperfections can simply get too distracting.

Next to the sound signature, the presentation of the FI-BA-SS is fairly pedestrian for a high-end earphone. Soundstage width and separation are compliment-worthy – the BA-SS is quite airy and spacious. The tonality, on the whole, is just a tad on the bright side and the timbre is quite good for an armature-based earphone – better than with the ATH-CK10, for example. Imaging, on the other hand, is a tad less believable than with the Audio-Technicas. Lastly, the sensitivity of the BA-SS is quite high – higher than with any top-tier earphone I’ve heard recently. The earphones benefit very little from a dedicated amp and actually hiss slightly out of all my amps and DACs. A portable player is really more than powerful enough to drive the BA-SS, though fidelity is a different matter. Plugging one of the world’s most revealing (and most expensive) earphones straight into my $20 Sansa Clip does feel a little strange but I’ll take that over carrying the iBasso D10 brick with a decrease in usability and increase in noise floor.

Value (7/10) – It is difficult enough putting a value on earphones costing $400, but the price tag of the Final Audio Design FI-BA-SS is nothing short of ridiculous. Even with diminishing returns factored in the FI-BA-SS would have to be the best earphone I’ve ever heard to truly justify its price tag – and in some ways it is. As a total package, however, the BA-SS is still a luxury item designed for those with a chunk of disposable income seeking the ultimate in both fidelity and exclusivity. The strangely ‘photorealistic’ sound of the BA-SS is clear proof that there is substance to FAD’s marketing claims and value in their patented Balanced Air Movement (BAM) technology – the BA-SS is as clear, detailed, and transparent as I can imagine an earphone being. At the same time, it is absolutely merciless when it comes to poor rips and recordings, too sensitive for most amps & DACs, and probably less than ideal in signature for the iPod crowd – not a mass-market seller, to say the least. Still, it is an invaluable proof of concept as any reasonably-priced FAD earphones utilizing BAM technology are now far less likely to pass by unnoticed. Even as it stands, the FI-BA-SS might be the destination earphone for some but I am hanging on to both of my kidneys for the time being.