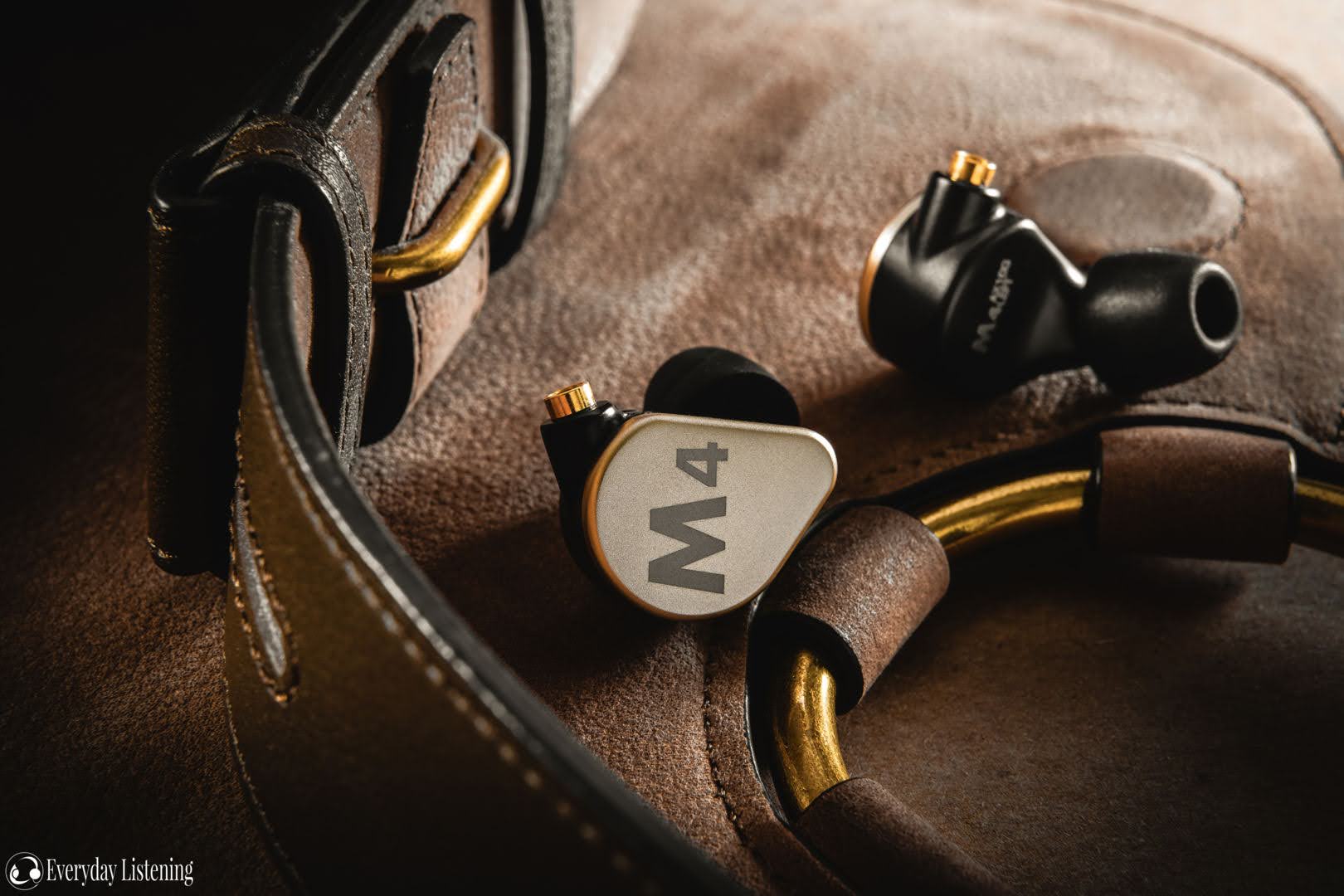 Fir Audio VxV ($999): The VxV is tuned in a different fashion but has clearly similar inspiration. It is a bit more mid-biased and lower contrast than the M4. Accordingly, it is tonally cleaner but sounds more atmospheric and less focused and grounded. While bass tuning is similar on a whole, the M4 has more deep-bass presence and extension, delivering a more weighted and powerful presentation. It has a more aggressive note attack, being more dynamic. Meanwhile, the VxV is smoother and more laid-back in both its tuning and note presentation. It isn’t quite as textured but is well defined and a touch more separated. The midrange also has a similar voicing on both albeit, vocals steal the spotlight more on the VxV. Both pursue a tonally clean sound with high separation and definition. The VxV sounds a little cleaner tonally, the M4 having a bit more warmth and gusto.

The VxV counterbalances this with greater density and a more laid-back lower treble that makes it sound smoother and a bit more forgiving. Meanwhile, the M4 is more defined and resolving but also a bit more coherent as it also has more warmth to balance. The VxV keeps up surprisingly in terms of treble extension and picks up fine details very well. However, it has a clear bias towards the middle and upper-treble set to a smoother lower-treble. In turn, it lacks the bite and definition of the more evenly tuned M4. The M4 has noticeably better fine detail retrieval and a bump in overall resolution. While both have similar width, the M4 has a little more and noticeably more depth. In turn, its image is more multi-dimensional and immersive in addition to offering sharper localization, though the VxV also achieves a holographic and floaty character at a much lower price.

Campfire Audio Solaris 2020 ($1499): The Solaris 2020 has a similar style of bass and midrange set to a smoother upper-midrange and brighter treble that reintroduces energy and openness. To me, the tuning on the M4 is more progressive and refined, but the the Solaris 2020 impresses equally in technical performance and has a lower price. Both offer similarly excellent sub-bass extension and slam. The Solaris 2020 has a slightly cleaner mid-bass giving it a bit more separation but less punch and note weight. Both also have similarly strong driver control too, the M4 decays a bit faster which makes it just as defined as the Solaris 2020 despite being a bit fuller. This gives it a small textural advantage. Both have similar vocal positioning but different voicings. The M4 is more open and has a bit more warmth to balance it out.

The Solaris 2020 has a more neutral tone and a denser upper-midrange. So it trades a little clarity and openness for a more coherent and forgiving character. The Soalris 2020 redeems note definition by being more articulate with a more forward lower-treble. In turn, it’s a little glossier but not by a large degree due to the smoother upper-midrange. The treble isn’t as even on the Solaris 2020, seeing a progressive rise into the upper-treble beginning but more peaks and troughs. The more even-handed M4 benefits from a sharper transient response and more focused detail presentation, picking up more fine detail in the foreground especially with a cleaner background on top. Meanwhile, the Solaris has a bit more air and sparkle in addition to matching the M4 on extension. The Solaris 2020 has a slightly larger soundstage and also presents holographic imaging. The M4 has slightly sharper localization and better separation.

Lime Ears Pneuma (1800 EUR): The Pneuma is a similar style of monitor but is more focused and less contrasted with a heavier focus on layering over expansion. The overall balance is similar with bass boost off and has greater slam with it on. As I preferred having the bass boost off, I will compare using this setting. Bass extends equally well on both, delivering excellent pressure and slam. The Pneuma has a bit more sub-bass bias, it has more slam at the cost of separation. The M4 has a slightly cleaner tuning here but both are similarly voiced altogether. The M4 has slightly faster decay, the Pneuma is a bit less textured here, providing a more dynamic but less articulate listen. The midrange positioning and voicing is equally accurate on both, both also lie on the energetic side, the Pneuma to a lesser degree.

The Pneuma has a bit more body and density, sounding more coherent and linear. The M4 has slightly higher clarity, separation and note definition but also sounds slightly less forgiving. The M4 is slightly brighter, the Pneuma also has a small 5k peak but a much darker background and less sparkle. In turn, the Pneuma doesn’t sound as open, the transient response is almost as sharp and clean but ultimately the M4 is slightly more detailed in the foreground and also more resolving in the background. While the Pneuma has good extension, it does appear to roll off sooner. The Pneuma has similar soundstage dimensions overall, and its presentation is more focused with sharper localization. It is also multi-dimensional but doesn’t have the top-octave energy and holographic properties of the M4.

Final Audio A8000 ($1999): The A8000 has a bright signature giving it a revealing and technically-orientated presentation. The M4 has more bass and both are tuned somewhat similarly with more sub-bass emphasis and fall off into the lower-midrange. Both offer similarly outstanding extension, the A8000 has a bit more definition at the very bottom. The A8000 has a slightly cleaner mid-bass and also slightly better driver control, delivering a more defined and detailed bass response. The M4 has a more appealing tuning being better balanced with the mids, it is a bit fuller in the mid-bass giving it more punch. The midrange is actually relatively similar in voicing on both, being bright leaning but clear and very resolving. Both have similar note body, being on the leaner side. The M4 has a slightly smoother top-end making it a bit more balanced and coherent.

The A8000 is one step more revealing, it has a bit more density in the upper-midrange to avoid sounding strained, but is a bit over-articulated by comparison to the M4. The A8000 has a bit less crunch to its note attack, perhaps given its single-DD configuration but it has a sharper lower treble peak that means it comes across as brighter than the M4. It has a similarly clean transient response with a concise note presentation and equally strong separation and detail retrieval on complex passages. The M4 has a slightly more linear top-end with its less isolated lower-treble peak. It resolves a bit more texture and has greater air, bringing background details more to the fore while the A8000 has a darker background and higher contrast. The A8000 has a larger stage in all axis and sharper localization. I feel its brightness harms its separation on a micro-level relative to the M4. The M4 is a bit more holographic as its top-octave is more energetic.

Soft Ears RS10 ($2099): The RS10 targets an ISO 11904-2 diffuse-field neutral sound with sub-bass boost. It represents a considerably more linear sound, of course, this is not always a good thing depending on your preferences and application. The M4 reaches a little deeper and provides more sub-bass pressure but the RS10 gets shockingly close. The RS10 has a cleaner tuning with less warmth and colouration but still a good amount of sub-bass slam, almost as much as the M4. It has a faster and more discerning mid-bass but also a less natural decay and texture. The M4 is a bit more dynamic and has higher note weight and greater punch in the mid-bass. The RS10 has a more forward midrange and it sounds more even, both delivering a more accurate body and articulation.

The M4 is naturally voiced, it has a slightly thinner body and is a bit more articulate and breathy. The RS10 has better extension and higher resolution in addition to an outstanding midrange timbre. The two are impressively even matched in the treble too. The M4 benefits from being brighter, in turn, it pushes small details more to the fore. It also has a slightly keener note attack giving its more bite to percussion. The RS10 is more even and less bright. It has more texture and more accurate body with a slight edge on foreground fine detail retrieval. The M4 has more sparkle and brings micro details more to the fore while the RS10 has a cleaner background, better layering and equally strong resolving power, it is just less overt in its presentation. The M4 has a slight advantage on soundstage width and has sharper directional cues. Meanwhile, the RS10 has more depth and sharper positioning, it is more organized on complex passages.

If there’s one recurring theme in this review, it’s that the M4 differs in its approach to sound tuning than most competitors. This is a dangerous line to tread as once you step away from the references we’ve accumulated through decades of research, it does become a very delicate balancing act in uncharted turf. With that said, I laud Fir’s choice to go against the grain. They’ve approached the challenge with mastery that can only be attained after years of experience in the field and Bogdan and his team have been rewarded with success in equal measure. The M4 gave me a refreshing experience; one with zero sacrifice in genre versatility nor odd timbral characteristics. This is not for those averse to brightness, especially in the treble and the soundstage is of average dimensions in class – albeit in a class of outliers. Still, it has become one of my personal favourite earphones for critical listening due to its ability to discern micro details like few others. Fir have provided a technically outstanding take on a clean, revealing tuning and haven’t taken the revealing aspect too far, retaining long-term listenability. The compact form factor lacks the ergonomic quirks of many competitors and the tech inside does effectively yield result with regards to both the listening experience and wearing pressure. The M4 is one of the best in-ear monitors on the market for those that enjoy a clean, tactile sound and want enormous detail retrieval presented in a holographic manner.

The M4 can be purchased from Fir Audio for $1899 USD at the time of review. I am not affiliated with Fir Audio or Project Perfection and receive no earnings from purchases through this link.