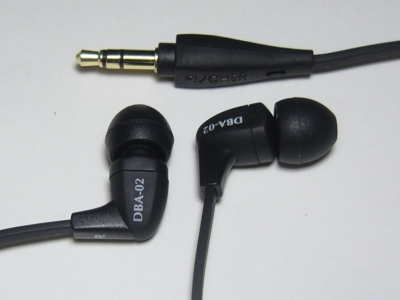 Accessories (4.5/5) – Standard (3 sizes), foam-stuffed Sony Hybrid-style (3 sizes), and Apple-style (2 sizes) single-flange silicone tips, triple-flange silicone tips, over-the-ear cable guides, shirt clip, and clamshell carrying case Note: newer DBA-02 mkII units feature fewer tips but include an L-shape 3.5mm plug adapter and built-in cable cinch
Build Quality (4/5) – The tiny new housings feel very sturdy compared to the old DBA-02 shells, boasting a nice rubberized finish and all-black color scheme. The thick flat cable is similar to the one on Fischer’s Oldskool ’70 portable headphone and is very well-relieved both on housing entry and at the I-plug. Biggest complaint is the lack of a cable cinch, which would be a bigger help with the thicker & stiffer flat cable compared to the old DBA-02’s softer twisted cord Note: newer DBA-02 mkII units feature a cable cinch
Isolation (4/5) – Very good now that the housings are designed for a deep fit and the accessory pack includes a larger variety of tips
Microphonics (3.5/5) – Bothersome when worn cord-down, low when worn over-the-ear
Comfort (4.5/5) – The new housings are small and very lightweight, with more shallowly angled nozzles that work both for cable-up and cable-down wear. They are only a bit larger than the q-JAYS/UE700 but the stiff, thick cable makes it harder for the DBA-02 mkII to disappear when worn

Sound (9.2/10) – Upon its release, the original Fischer Audio DBA-02 was undoubtedly one of the best bang-for-the-buck earphones on the market for fans of balanced and accurate sound. It mustered a loyal following and still commands frequent recommendations more than two years later. While the new mkII revision, which is set to replace the mkI very soon, is in large part cosmetic, the two generations do differ ever so slightly in sound signature.

Expectedly, the mkII retains the general sound profile of a TWFK-based earphone – tight and precise bass, a clean and detailed midrange, and prominent, sparkly treble. As before, the bass quantity is quite close to neutral and the low end is only missing a tiny bit of extension at the very bottom. The mkII seems to move a touch more air compared to the old DBA-02 and has a marginally thicker note presentation but overall the bass is similarly quick and highly detailed, with better texture compared to the Ultimate Ears 700 and a bit more punch compared to the VSonic GR01.

The midrange is clean and prominent, balanced very well with the low end and offering high levels of clarity and detail. The DBA-02 has always been an aggressive-sounding earphone, with an extremely crisp presentation and excellent texture. The mkII revision sounds a touch more dry compared to the old version, with a darker background and cleaner notes, but on the whole the two sets are again more similar to each other than they are to other TWFK-based earphones. The CK10, GR01, and UE700 are all smoother and more liquid-sounding but the DBA-02 mkII is more aggressively detailed compared to the UE700 and clearer than the GR01. It is the most analytical-sounding of the bunch, but the clarity and detail are well worth it.

The top end of the DBA-02 mkII is crisp and extended. The resolution of the TWFK driver is immense – even the VSonic GR07 fails to sound all that clean and effortless next to the DBA-02. Compared to the original DBA-02, the mkII seems to have been tuned for slightly more relaxed treble, but in reality it is only a hair less sibilant on a few tracks. Otherwise it sounds sparkly and energetic, as the original did – less ‘hot’ than the ATH-CK10 but still not quite as smooth as the VSonic GR01. Treble extension is good and yet there’s none of the sheen or shimmer present at the top end of some other BA-based universals, resulting in fairly realistic timbre with no metallic treble edge.

The presentation of the DBA-02 mkII is open and airy, as TWFK-based earphones tend to be, but perhaps a touch less so than the brighter mkI. The soundstage is well-rounded, with better depth and height but a little less width in comparison to the UE700. Instrument separation is excellent – again more competent than even the VSonic GR07 – and the sound is nicely layered. The ATH-CK10 is still slightly more enveloping, with better 3D imaging and ambience, but the DBA-02 is no slouch, with a better on-center feel compared to the UE700 and especially the more distant-sounding GR07. Some dynamics are sacrificed in order to maintain aggressive detailing – the Earsonics SM3, Westone 4, and most dynamic-driver sets fare better here – but this will be a mere nitpick for most listeners. Overall, the sound quality of DBA-02 mkII is still well worth the price of admission.

Value (9.5/10) – The second revision of Fischer Audio’s renowned DBA-02 finally matches the premium sound of the earphone with a premium feel, making a series of gains over the old version as a result of a new housing design, more durable cable construction, and improved accessory pack. The updated earphones are sturdier, more comfortable, and more isolating – a more mature package more deserving of being a market mainstay. The sound, while slightly re-tuned, is still closer to the 1st-gen DBA-02 than the other TWFK-based earphones on the market. The only real complaint has to do with the microphonics – there is more cable noise with the flat, rubbery cable on the DBA-02 mkII unless the earphones are worn cord-up. Despite this, the DBA-02 is still about as good as it gets for the analytical listener; the competition may have gotten stiffer, but the bang/buck ratio of the DBA-02 has remained very strong.