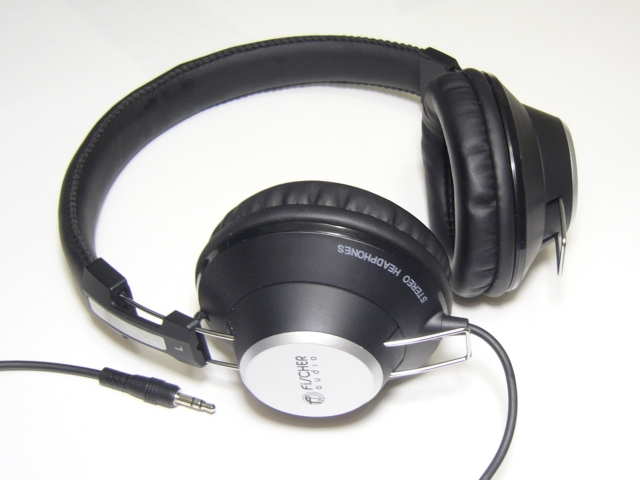 Build Quality (8/10): The structure of the FA-004 is made of a combination of matte plastics and metal, with pleather padding used on the headband and earcups. Two color schemes are available – a fairly common black-and-silver design and a more unusual coffee brown coloration. Aside from the headband length adjustment, there are no moving parts – always a plus when it comes to predicting the longevity of a headphone. The cable is thicker than average and available in both straight and coiled configurations, with the straight cable standard on the brown FA-004 and the coiled cable used on the black-and-silver one. The coiled cord is one of the shortest and lightest I’ve ever encountered – probably the only such cable I’ve used that even comes close to being ‘portable’.

Comfort (7/10): The structure of the FA-004 is slightly atypical in that the cups have no adjustment about the horizontal axis. The soft pads probably distribute force more evenly for those with larger heads but for me the pads of the FA-004 always clamp most strongly at the bottom. Needless to say, sets that allow the cups to tilt correctly, – sets such as the Maxell DHP-II and Sennheiser HD428 – are more comfortable for long-term listening.

Isolation (6.5/10): The FA-004 is a closed headphone and would probably isolate better than it does if the cups were allowed to seal fully with my ears. As it stands, the isolation of the FA-004 is no greater than that of Sennheiser’s loosely-clamping HD428.

Sound (7.5/10): The sound of the FA-004 is lively and engaging. The bass goes deeper than that of the Koss UR55 but the FA-004 still has a slight mid-bass lift and mild low end roll-off. Compared to the UR55 and the more analytical-sounding Sennheiser HD428, the FA-004 tends to sound softer and fuller, though not to the same extent as the Maxell DHP-II. Bass impact and power are quite good, though the punch is not quite as quick and immediate as that of the Koss. Personally, I find the more laid-back low end of the FA-004 a bit more natural and it certainly falls well in line with expectations for a fun-sounding set such as the FA-004.

The midrange of the FA-004 is slightly forward compared to that of the HD428 but not as aggressive as that of the UR55. Clarity is better than that of the Koss set but still falls very slightly short of the leaner-sounding Sennheisers. Despite the FA-004 having the fuller, thicker note presentation, overall detail and texture are good. The emphasized low end imparts a pleasant warmth on the sound and the midrange is lush and sweet. The smoothness is impressive, too, but doesn’t prevent the FA-004 from sounding lively. It is not a neutral-sounding headphone but the coloration is vivid and enjoyable.

The treble of the FA-004 is the least unique part of the sound signature. It is bright and sparkly but neither as prominent nor as detailed as that of my other sets. The HD428, for example, is both more nuanced and more extended up top. On the upside, the FA-004 is smoother than the UR55 and the treble is rarely distracting or overbearing. The presentation is airy, not unlike that of the HD428, and the headphones sound spacious and three-dimensional. Soundstage width is fairly average but the depth and layering put the somewhat flat-sounding HD428 to shame. The front-to-rear and top-to-bottom soundstaging are quite decent for a portable headphone and really help with immersion. The imaging appears to be quite good as well – the positioning is by no means pinpoint-accurate but the headphones leave enough space around each sonic cue to sound convincing.

Value (8/10): Fischer Audio headphones and IEMs have become fairly common recommendations around head-fi in the past year due in no small part to the great value for money offered by most models. The FA-004 is no exception, competing very well with the majority of similarly-priced portables. The sound put out by the headphones is detailed and smooth, with a slight mid-bass boost, bright treble, and warm mids. Clearly, the FA-004 was designed as a fun and easy-going consumer can and not a studio monitor, and it serves the purpose well. My only complaint is with the structure, which lacks adjustability and does not conform well to smaller heads, resulting in poorer isolation and long-term comfort than would otherwise be possible.