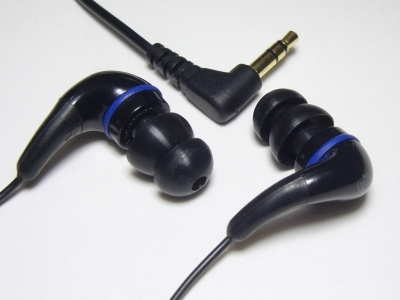 Accessories (4.5/5) – Bi-flange silicone tips (3 sizes), porous foam tips (4 sets in 2 sizes), cleaning tool, and zippered carrying case
Build Quality (4/5) – As with the old MG5 Atrios, the teardrop housings are made of plastic and feature molded rubber strain reliefs and thin, filterless nozzles. The memory wire has been dropped but the cable remains the same – light and flexible but not very thick
Isolation (3.5/5) – Excellent with any of the stock tips or Shure Olives
Microphonics (4/5) – Low when worn cable-down; nonexistent otherwise
Comfort (4.5/5) –The fit of the Atrios reminds me of the Phonak PFEs. When worn properly, the housings don’t touch the wearer’s ear at all although the bi-flange tips can be a bit intrusive. Thankfully, the memory wire has been dropped so they can now easily be worn cable-down

Sound (8.8/10) – The original Future Sonics Atrios were introduced back in 2007 and quickly rose to fame as some of the best basshead earphones money could buy. Four years and several revisions later, the low end is still the most attention-grabbing aspect of the Atrio sound – deep and powerful, yet controlled and accurate. The bottomless bass extension that made the old Atrio a hit is still very much a selling point of the new one. The bass is a bit forward in the overall signature but manages to be powerful without throwing off the balance. It can be reasonably tame when necessary but can also become dominant and explosive when track calls for it. The lack of a mid-bass hump helps, eliminating the bloat endemic to so many bass-heavy earphones, and the sub-bass emphasis gives the low end good rumble and a tactile feel. The drivers are still not the quickest out there but they don’t lose resolution quickly the way many mid-bassy earphones in the lower tiers do. The difference between the Atrio and lesser bass-heavy earphones such as the Fischer Audio Eterna is obvious – next to the Atrio, the Eterna sounds overly soft and bloated, with noticeably poorer clarity and detail resolution. Even the similarly-priced Sennheiser IE7 lacks control and tightness at the low end next to the Atrio.

The midrange of the Atrio is recessed slightly in comparison to the low end but still impresses with clarity and detail. It’s not quite there up with the HiFiMan RE272 or Sony MDR-EX1000 on either count but competes well with the RE-ZERO and Turbine Pro Coppers. The mids are slightly warm and thick compared to the similarly-priced VSonic GR07 but lack some of the overall refinement and don’t achieve as neutral a tone. They sound smooth but slightly ‘dry’ in character, which contributes to a more crisp and monitor-like sound next to the softer, more lush MTPC and Sennheiser IE7. The treble is boosted in comparison to the old Atrios, which sounded dark and a little murky for my taste. The top end of the new Atrios isn’t laid-back and will not mask issues with the source material. It is a little more edgy than before but no less smooth on the whole than that of the VSonic GR07. Top-end extension is still only moderately good and the overall tone is still just a bit on the dark side but the treble quantity should be sufficient for most listeners without risking violent sibilance and harshness.

The presentation of the MG7 is not particularly impressive for a top-tier earphone but works well enough with the sound signature. The soundstage is relatively well-rounded but width and depth are only average, superseded easily by the spacious soundstage of the Sennheiser IE7 and even the lower-tier FA Eterna (pretty much the only area in which the Eterna can compete with the new Future Sonics). The bass of the Atrio layers well over the rest of the sound and the healthy note thickness makes the thinner-sounding RE-ZERO somewhat less convincing despite its similar soundstage size. The MG7 also images better than the ZERO does, providing a more accurate sense of placement and distance. The brighter VSonic GR07, expectedly, carries better air and sounds spacious and open in ways the Atrio can’t quite match but separation seems improved over the MG5 version. The timbre is not up there with the Sony MDR-EX1000, JVC FX700, or even Monster MD, but then neither is the price. In its tier the Atrio is very competitive – I don’t feel that Sennheiser’s IE-series earphones perform better, for example. A final point to note – as before, the Atrio is not at its most brilliant at low listening volumes but – due to the newfound treble prominence – may now become tiring at extremely high levels as well.

Value (9/10) – Outfitted with the updated MG7 transducers, the latest-gen Future Sonics Atrio manages to preserve the bass-heavy sound signature of the previous iteration while making serious performance gains on the dynamic-driver heavyweights from the likes of Sennheiser and JVC. With no changes made to the exterior save for the disappearance of the memory wire, the MG7 Atrio remains a somewhat unsightly but highly practical earphone with its secure fit, high isolation, and low microphonics. The bass-heavy sound signature, now made slightly more v-shaped with added treble, still offers a surprising blend of fun, dynamic-driver sound and monitor-like accuracy and control. It’s not perfect, but it’s an impressive step forward and one that should make the competition very wary of the low-profile PA-based manufacturer, especially whenever bass quantity and quality are brought up.