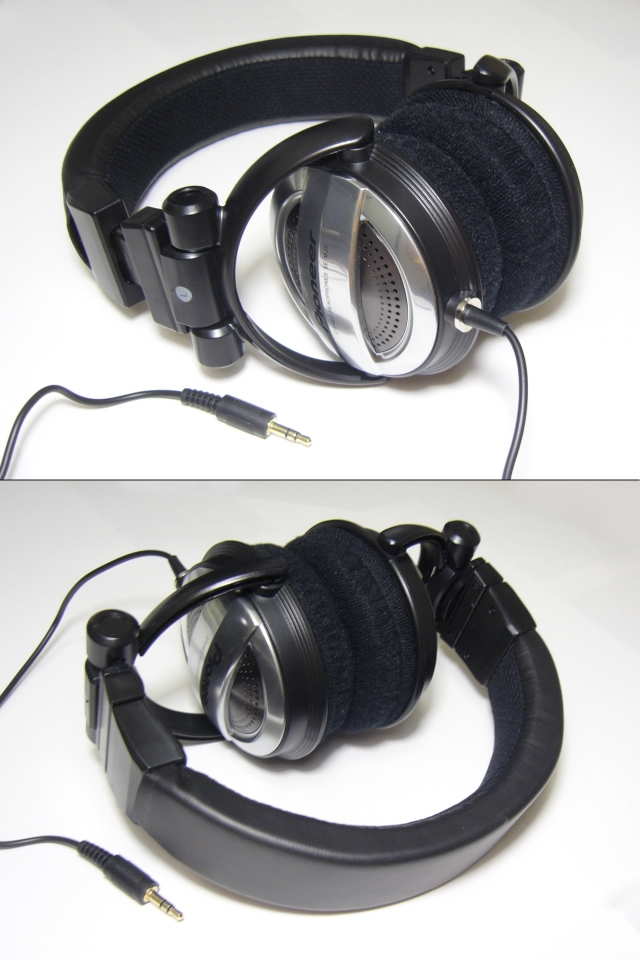 Supraaural DJ-style headphone from PioneerMSRP: $89.99 (manufacturer’s page)
Current Price: $80 from amazon.comBuild Quality (7/10): The construction of the MJ5 is quite typical of a cheaper DJ-style headphone. Though all of the elements seem to be in place, the load-bearing parts are made entirely of plastic and don’t inspire as much confidence as the metal frame of Sony’s legendary MDR-V6 or the industrial build of Ultrasone’s HFI-450. Despite the plasticky structure, the SE-MJ5 is no lighter than the V6, which I found slightly odd. On the upside, the supraaural headphones are both flat-folding and collapsible and come with a portable-length single-sided cord reminiscent of the thicker cables on the Sony MDR-ZX700 and Ultrasone HFI-15G. Another thing Pioneer did right was equip the MJ5 with easily-interchangeable velour and pleather pads (much like those used by the Numark PHX).Comfort (7/10): The SE-MJ5 is a large supraaural set similar in size to the AKG K181DJ. Like most supraaural DJ headphones, it boasts moderately high clamping force – a little stronger than the HD25 but not quite on the AKG K81 level – and can get very fatiguing for those sensitive to supraaural fitment. On the upside, it comes with two sets of thick pads (one velour, one pleather) and the multi-axis folding mechanism makes the fit highly adjustable.Isolation (6.5/10): The SE-MJ5 is billed as a closed headphone but the large number of ‘vents’ located on the earcups says otherwise. The isolation is decent for a semi-closed set but there is a fair bit of leakage at higher volumes. As a library headphone, the MJ5 simply won’t do.Sound (7/10): The sound of the MJ5 is somewhat atypical of entry-level DJ headphones, with the usual warm-and-bassy sound signature supplemented by plentiful treble and a surprising sense of space. The bass provides a robust platform for the rest of the sound, beating out Sony’s MDR-V6 in quantity and impact and matching up in extension and depth. Decay times aren’t the quickest and the character of the bass tends towards ‘boomy’, giving the MJ5 a darker tonality with some tracks, but the detail is decent and the resolution doesn’t give a whole lot to complain about. The MJ5 won’t win any awards for bass control as notes are on the thick side and there is a bit of bass bleed but on the whole the big bass is rather pleasant in a club-reverb sort of way.The midrange is in very good balance with the low end – noticeably less recessed than with the Sony MDR-V6 and about on-par with the HD25. The moderate bass emphasis of the MJ5 does color the mids somewhat – the V6 and HD25 both sound more neutral in tone – but, bass bleed aside, the mids are quite decent in quality. Clarity and detail are not stellar next to higher-end studio-oriented sets but vocals are strong and the mids have a bit of a warm and rich character to them. Those who are willing to sacrifice a bit of crispness for a more full-bodied sound will likely enjoy the midrange of the MJ5. The treble is more noteworthy – the MJ5 may just be the most sparkle-heavy headphone I’ve heard in recent memory. There is a lot of treble emphasis, mostly coming in quite high (above 6k or so). If the MDR-V6 has ‘hyped-up’ treble, the MJ5 is a treble monster, but not in a bad way. Since its peaks are higher up on the response curve than the Sonys’, the MJ5 manages to skirt sibilance pretty well. Yes, there will be sibilance with some tracks but I felt that at least some of what I was hearing was almost subconscious, with my ears telling me that there should be a good amount of sibilance with that amount of treble sparkle and refusing to acknowledge the contrary. Treble boost aside, top-end extension is quite good and compares favorably to that of the HD25-1.The presentation, too, is impressive without being particularly accurate. The soundstage is fairly wide and has decent depth and the MJ5 sounds surprisingly enveloping. There is a sense of space to the music, partly due to the thick pads, which position the drivers and inch or so away from the ear, and yet the MJ5 has very good ‘center stage’ feel when dealing with vocals. Though positioning is not pinpoint-accurate, the SE-MJ5 does have very good separation and layering and is helped along by the very decent dynamic range. Expectedly, the sculpted frequency response doesn’t yield the most natural timbre but on the whole the presentation of the MJ5 befits the sound signature. Now, I am not usually a fan of the ‘boosted bass + boosted treble = balance’ approach to audio but the MJ5 works quite well as a whole – it is fun and colored and makes no concessions whatsoever for accuracy. It’s far from technical perfection but then anyone buying a <$100 DJ can probably isn’t looking for absolute fidelity anyway.Value (8/10) The Pioneer SE-MJ5 may yield to pricier full-size DJ cans in build quality, comfort, and isolation but for the asking price its sound is surprisingly enjoyable. The MJ5 is one of the rare breed of portable headphones that manages to maintain a ‘v-shaped’ balance without significantly recessed mids – a godsend for those in search of a fun-sounding headphone that maintains a semblance of sonic versatility. Those who abhor supraaural fitment or require a fully closed coupling for maximum isolation will still want to give the Pioneers a pass but at the current street price these headphones are an interesting alternative to the other bass-happy entry-level portables.Manufacturer Specs:Frequency Response: 5 – 28,000 HzImpedance: 32 OSensitivity: 105 dB SPL/1mWCord: 4ft (1.2m) + 6.6ft (2m) extension, single-sided; Straight PlugSpace-Saving Mechanism: Flat folding, collapsible