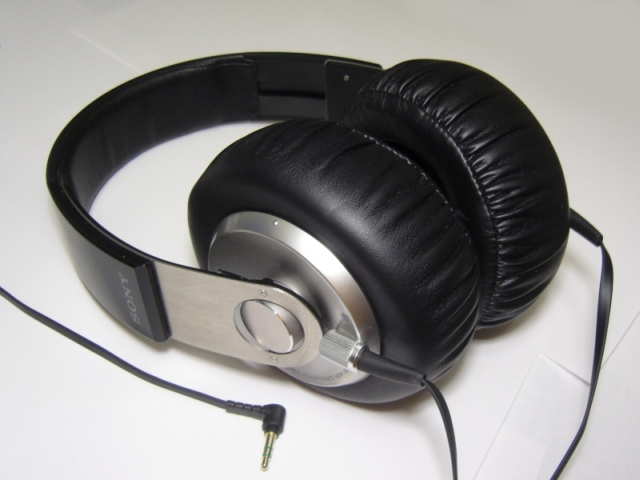 The XB700 may not be as small or light as the lower-end XB-series models, but that hasn’t stopped bass lovers from using them on the goMSRP: $129.99 (discontinued)
Current Price: $80 from amazon.comBuild Quality (8/10): The design of the XB700 is clearly dominated by the humongous memory foam pads. The headband and silver cups are plastic but the forks are reinforced with aluminum and feel very solid. As with the cheaper XB500, there is no play in the structure as the XB700 is neither flat-folding nor collapsible and the tangle-free flat cables, though not removable, feel quite sturdy.Comfort (9/10): By virtue of the huge and impossibly soft pads, the XB700, like its smaller and lighter XB500 sibling, is one of the most comfortable headphones around. The pads are easily large enough to encapsulate my ears fully and the underside of the plastic headband is well-padded. Clamping force is mild and the XB700 remains comfortable for hours but still fits very securely. The only downside to the fit is that the pads do get squished down and swathe quite a large area of skin in hot, sweat-invoking pleather, though this could be an upside in cooler climates.Isolation (7/10): The XB700 isn’t particularly well-isolating for a headphone of its size but fares better than average due to the huge and well-sealing pads. Leakage is minimal at reasonable volumes but blasting these in a library is not a great idea – despite being marketed as closed headphones, there are vents on the back that leak consistently at high volumes.Sound (7.25/10): For headphones hailing from a mainstream manufacturer’s ‘Extra Ba/strongss’ line, the Sony XB500 and XB700 are quite well-liked around Head-Fi, and with good reason – they are, quite simply, a guilty pleasure, offering gobs of bass without undeserving upmarket pricing or claims of high fidelity. I’ve looked at the lower-end XB500 previously and found its warm and mushy antics to be expectedly imperfect for critical listening but surprisingly relaxing and enjoyable on the whole. The XB700 may not be worth picking over the XB500 for those interested in maintaining a semblance of portability but I think they are a better-sounding set from a technical standpoint.Like the cheaper XB500, the XB700 is ridiculously bass-heavy, with a quoted frequency extension of 3 Hz at the bottom end and enough impact to rattle loose teeth. The bass is deep and forward, sometimes excessively so, but not of the muddy, washed-out, fart-cannon kind that most mainstream ‘enhanced-bass’ headphones and earphones put out. Attack is a bit quicker than it is with the XB500, causing the XB700 to sound slightly more aggressive, but on the whole it is still a smooth and somewhat softer-sounding set. One thing that the XB700 does a bit better than the XB500 is keep the lower mids free of bass bleed – the crest of the XB700’s bass hump seems to be lower down than that of the XB500. This is most likely due to the larger drivers not having to work as hard to deliver the desired amount of bass (which makes the upcoming 70mm MDR-XB1000 all the more interesting). The result is a slight increase in the lower-midrange recession as well as a decrease in warmth compared to the XB500. The midrange of the XB700 certainly is quite recessed but the mids themselves are surprisingly crisp and articulate regardless, with a slight drop in lower-midrange fullness compared to the XB500 and Phiaton MS400. Clarity is quite good as well – a bit better than with the Beats Solo and V-Moda Crossfade and on-par with the pricier Phiaton MS400.The treble of the XB700, unlike that of the XB500, is no more recessed than the midrange, maintaining surprisingly good presence up into the high 15kHz range. Treble response is not very even but it isn’t harsh or sibilant, either. There’s not much sparkle but on the whole the XB700 is surprisingly crisp and competent. The presentation is enjoyable as well, with slightly better separation and a better overall sense of space compared to the XB500. There’s still a limit to the distances the XB700 can portray but layering is usually quite good for a bass-forward consumer-class can and positioning is fairly convincing. Interestingly, despite being more efficient than the Beats, they pair fairly well with my desktop amp but still require higher volumes for maximum detailing and texturing, sounding a bit dull and thumpy at minimal output levels. On the whole, the colored and uncompromisingly bass-heavy sound of the XB700 won’t be winning any fidelity awards any time soon but as a ‘guilty pleasure’ for closet (or not) bass fanatics, it is difficult to beat.Value (8/10): The combination of smooth but heavy bass and recessed but crisp midrange and treble of the XB700 makes for an exiting and enjoyable – if not hi-fi – sound signature. The headphones are also well-built and extremely plush and comfortable aside from the fact that they heat up quicker than many earmuffs. Those in search of reasonably competent closed basshead cans that can be worn for hours on end (ideally in cold climates) and don’t cost a fortune are likely to find their dream set in the XB700. However, I do struggle imagining myself wearing the huge head-pillows away from home and on that count the Sonys really cannot compete with most of the other cans tested here.Manufacturer Specs:Frequency Response: 3 – 28,000 HzImpedance: 24 ΩSensitivity: 106 dB SPL/1mWCord: 3.9ft (1.2m); Angled PlugSpace-Saving Mechanism: N/A