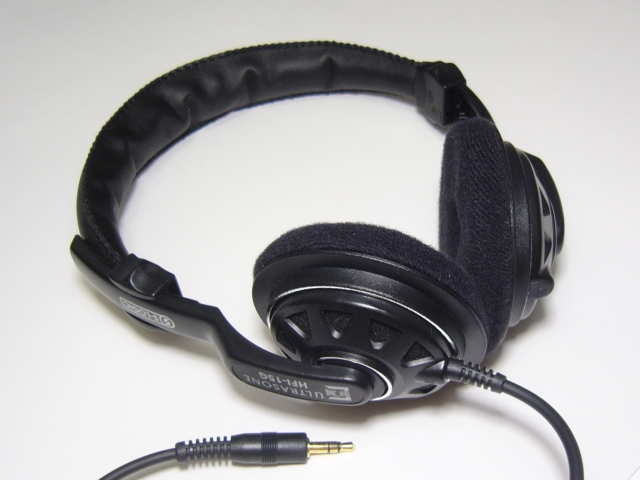 Ultrasone’s first attempt at a supraaural portable, still going strong after nearly seven yearsMSRP: $109.00 (manufacturer’s page)
Current Price: $90 from amazon.comBuild Quality (7/10): If there is one area where the HFI-15G is starting to show its age, it is definitely in the design and build. The construction is very simple and almost entirely plastic. The plastics feel a bit cheap but should stand the test of time. The cups have some freedom of motion and headband length can be adjusted but other than that there are no moving parts. The cups are closer in size to those of Grado headphones than the Sennheiser PX models and the foam donut pads are covered in cloth. The single-sided cord is thick and flexible and terminates in a beefy 3.5mm I-plug.Comfort (9.5/10): The HFI-15G is a light and loosely-clamping supraaural headphone with plentiful padding on the cups and headband. The only downside is the cloth covering the pads, which can be quite itchy at first.Isolation (3/10): The open design lets plenty of outside noise in and leaks some sound out.Sound (6.75/10): Having heard Ultrasone’s newer Zino portable as well as some of the higher-end models, I expected the HFI-15G to be slightly v-shaped in sound signature and thus differentiate itself from the open supraaural headphones made by Grado and Sennheiser. However, the HFI-15G really isn’t all that different from Sennheiser’s PX100 with its bass-heavy, smooth, and slightly laid-back sound. There is a moderate mid-bass hump and slight subbass roll-off. The bass has a good amount of kick but generally sounds a touch soft and a little boomy. There is a thickness of note to the HFI-15G that reduces texture slightly compared to the Sennheiser PX100-II and AKG Q460 I’ve been using lately. Driver speed is also not quite as good as with the Zino or other mid-range portables, though it does improve with amping.The mids of the HFI-15G are warmed up slightly by the mid-bass hump and just a bit recessed compared to the bass. Resolution is quite good but mid-range clarity is a little poorer than with the Maxell DHP-II and more neutral portables like the Sennheiser PX200-II and ATH-SQ5. Detail levels are good as well but the HFI-15G is rather passive in conveying detail even next to the similarly-smooth Sennheiser PX100-II. As with the PX100, vocals come across with smoothness and authority but lack the edge that brighter, crisper headphones tend to have. Harshness and sibilance are nonexistent and the treble is recessed even more than the midrange. The top end of the HFI-15G is quite laid-back and relaxed. It’s not as crisp and clean as the treble of the more analytical PX200-II and ATH-SQ5 and even the PX100-II sounds livelier on the whole despite having a similar overall balance. Expectedly, the tone of the Ultrasones is slightly dark even next to the Sennheisers – not unpleasantly so, but definitely noticeable.The presentation of the Ultrasones actually improves slightly on that of the PX100-II. The headphones are similarly spacious and open-sounding but whereas the PX100-II always puts distance between the listener and the music, the HFI-15G seems to be more versatile in terms of layering and positioning, portraying both distance and intimacy with enthusiasm. The bass of the 15G doesn’t have the tendency to get ‘smeared’ over the sonic stage and only improves with amping. On that note, the HFI-15G actually really likes extra power – speed, detail, balance, and control all improve when the Ultrasones are plugged into a dedicated amp, even a small one such as my mini3. The inefficiency of the headphones could be blamed on the age of the design but it is just as likely that the 7-year-old cans were simply not designed for modern portable sources.Value (7.5/10): The Ultrasone HFI-15G remains a competent all-around performer despite its age and simplistic design. Light and comfortable, the HFI-15G is comfortable for long listening sessions, which are made all the more pleasant by the smooth and relaxing sound signature. For use in public I would still recommend a closed headphone but for those in search of an open-back supraaural with a comfortable fit and competent sound, the HFI-15G is a very worthy competitor for the venerable Sennheiser PX100-II.Manufacturer Specs:Frequency Response: 20-20,000 HzImpedance: 32 OSensitivity: 96 dB SPL/1mWCord: 3.28ft (1m) + 6.56ft (2m) extension, single-sided; Straight PlugSpace-Saving Mechanism: N/A