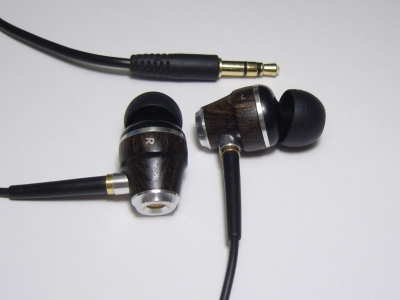 Accessories (4/5) – Single-flange silicone tips (3 sizes), foam tips (2 sizes), 2.3’ (0.7m) extension cable, and protective magnetic-clasp carrying case
Build Quality (4.5/5) – The build of the FX700 is a fusion of beautifully-machined wood and various metal alloys. The earphones look and feel like a flagship product – the air of quality and sophistication surrounding the HA-FX700 is similar to JVC’s HA-DX1000 headphone. They are big, heavy, and flawless in craftsmanship. The rear port and nozzle are both protected by metal meshes and the cable entry point features a ¾”-long strain relief in addition to metal reinforcement. The cable itself is similar to the cords found on JVC’s lower-end products – soft, reasonably thick, and quite flexible. The 2.6’+2.3’ cable configuration is very annoying, however, as the cord is too short to be used without the extension and way too long with the extension added on
Isolation (2/5) – The FX700 is an open-back IEM and isolates slightly less than Sennheiser’s IE8 or Phiaton’s half in-ear designs
Microphonics (5/5) – Cable noise is extremely low when the FX700 is worn cord-down and nonexistent with over-the-ear fitment
Comfort (4/5) – The HA-FX700 boasts a familiar angled-nozzle design with a large driver hump near the front of the housing. Size-wise the JVCs are quite large – noticeably larger than Denon’s AH-C710s, which have a similar form factor. Still, the driver bulge provides a secure fit and the earphones are quite comfortable in the long run despite the heft

Sound (9.1/10) – Despite the misleading ‘HA-FX1000’ moniker given to the Japanese version of JVC’s previous wooden in-ear, the (newer) HA-FX700 is the definitely the company’s flagship earphone. The open-back design of the earphone pretty much guarantees poor isolation and since isolation translates almost directly to sound quality out in the real world, the FX700 only shows its true capabilities in quiet environments. Its lively and aggressive sound signature is not one commonly found among top-tier dynamic-driver IEMs but after an initial adjustment period, the FX700 leaves no doubt as to its standing among the best dynamics. As a general rule I am not a fan of the ‘ton of bass + ton of treble’ approach to audio, which partially explains why I like the Monster Golds and Miles Davis Tributes better than the Coppers, but these JVCs sound incredibly natural and effortless.  That said, I still think that the FX700 sounds best at low volumes since the bass and treble both tend to become more dominant as the volume is increased.

The bass of the HA-FX700 has what is quite possibly the best balance of quantity and control in the IEM realm. Though it is clearly not as tight and quick as the bass on most of my BA-based earphones, it does sound quicker than that of the Monster MD or Sennheiser IE8. The response of the FX700 is also a bit more linear than that of the MD, though both have great depth and extension. The MD has slightly more rumble and bass power on the whole but the FX700 really doesn’t lack either. Due to the combination of speed and high impact, the bass of the FX700 is a little ‘aggressive’. As a result, it can be excessive for my liking – the FX700 could do with a more subbass-biased balance (a-la Hippo VB), which would make the lower midrange a little more neutral, but then it would be a different earphone.

Despite the aggressive bass, the midrange of the FX700 is cleaner and clearer than those of the Monster MD or Sennheiser IE8. It attempts to strike a balance between clear-and-detailed (a-la RE252) and the smoother, thicker sound of most high-end dynamics. The FX700 is still not a neutral earphone and there is definitely some warmth to the midrange, but it is more on-level with the Ortofon e-Q7 than the IE8/MD. Yes, most of the thinner-sounding high-end armatures still have the upper hand when it comes to clarity and microdetail, but it is amazing how close the (comparatively) gigantic dynamic drivers of the FX700 come to those levels of performance. In terms of balance, the midrange is not as aggressive as the bass or treble and has a tendency to become slightly subdued at higher volumes, which certainly preserves the spirit of the fun, ‘v-shaped’ earphone. However, on several occasions I ended up catching myself thinking that the pushy nature of the bass can be detrimental to the overall musical experience afforded by the JVCs.

The timbre of the earphones is worthy of particular mention – I can’t make any claims as to whether the materials used in the construction of the housings have any effect on how they sound but the timbre of the FX700 is outstanding. As a result, the JVCs have some of the most realistic reproduction of stringed instruments I’ve heard out of an in-ear, adding to their excellent timbre the right amount of crispness, detail, and texture for the most minute nuances of string motion to be distinguished. Being an armature type of person, the only other higher-end dynamic I have on hand at the moment is the Sennheiser IE7, and next to the FX700 it is especially apparent how plasticky the IE7 actually sounds.

As hinted above, the treble of the FX700 is nearly as prominent as the bass. Though it is not harsh or sibilant except when necessary to remain faithful to the original recording, it is abundant in quantity and boasts plentiful sparkle and good clarity. Top-end extension is excellent and overall the treble reminds me more of the detailed and extended top end of the IE8 than the softer-sounding Monster MD or HiFiMan RE262. The sparkle of the FX700 makes it quite edgy for a dynamic-driver earphone, but given the choice between the overly-exciting top end of the FX700 and the slightly boring treble of the RE262, I see myself going for the JVCs every time.

Similarly interesting is the presentation of the FX700 – though the JVCs don’t have the out-of-the-head feel of the IE8, soundstaging doesn’t leave a whole lot to be desired. Soundstage width is good but the depth and layering are superb, resulting in accurate portrayal of both distance and intimacy. The impressive imaging gives the earphones an immersive overall feel, though I still feel that, as with most IEMs, the soundstage of the FX700 is slightly elliptical in nature, i.e. lacking just a bit of front-to-rear and top-to-bottom positioning.

Value (8/10) – Like the earphone’s aesthetics and construction quality, the sound of the JVC HA-FX700s is unique and substantial. The JVCs easily run side by side with the other top-tier dynamics in technical proficiency and, on several counts, come out ahead of the field. The drivers JVC used in the FX700 are extremely impressive and manage to shrug off tracks of any complexity, never sounding strained or overwhelmed. The HA-FX700 is, at long last, a high-end dynamic-driver earphone for those who prefer lively and aggressive ‘v-shaped’ sound to the softer, warmer signatures of the IE8/Monster MD/RE262/MTPG. When it comes to practicality, the value of the FX700 is more questionable – for an IEM the FX700 isolates very little and can become fatiguing if the volume is raised significantly to compensate. If ever there was a top-tier earphone for home use, this is it, but out in the real world the FX700’s competitors may win the fight without throwing a punch.