What’s So Funny About Pace, Drive and Finger Snapping?

I want to thank Sammy of Rhapsidio (and Nic) for allowing me to audition the Zombie and review it. I will endeavor to review it objectively; no incentives for a positive review were provided.

(With respects to Nick Lowe/Elvis Costello)

(OK Class, I want you all to sing the title of this review AS LOUD AS YOU CAN when it comes up in the chorus!)

There are many yin-yang, opposite polarity positions in audio: analogue versus digital, tube versus solid state, musical versus analytical, each with its proponents and naysayers. One that I see alluded to, but not actually expressed, could be expressed as “fun” versus “serious” gear, the implication being that the latter is “better” than the former, and reserved for when one wants to really analyze the music, while the former is casual, not “audiophile approved” but OK for casual listening, when one doesn’t want to think or get into true audiophile ecstasy while listening. This actually goes back to the earlier days of 2 channel, when British companies Linn and Naim took on the other high end manufacturers, and made “pace” and “finger snapping”, or involvement, their primary goal, eschewing audiophile niceties like microdetail, soundstaging, imaging, which were the criteria gear was being judged by. Their take was these aspects of sound reproduction were well and good, and their gear could do it too, but focusing on timing and rhythm brought you into the heart of the performance and the artist’s intentions, and were their primary goals for their gear. In ear headphones are in their infancy (relative to 2 channel), and this isn’t yet the credo for a manufacturer, but the gear I’m focusing on today demonstrates how success in the timing/pace world can make for a great listening experience and a successful product. 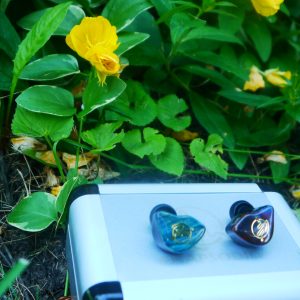 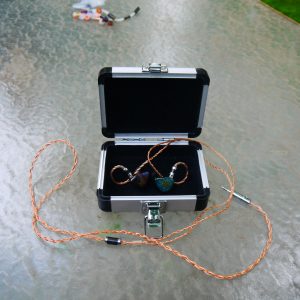 The Zombie is dramatically named-it implies a take-no-prisoners mindset in developing it. In these days of mega driver counts and hybrids, an 8+1 configuration is not anything unusually high; in fact, their flagship Infinity boasts 20 BA drivers. What IS unusual is the use of the dynamic driver “full frequency”, as they put it. Let’s see what the results of this recipe are…

I received a Zombie that has been a “tour” model, thus not straight from the factory. I did have a few issues with it at first. I had a hell of a time getting my Spin Fit tips on, and in doing so, the left filter popped off and disappeared (eventually, the right one fell out as well). I haven’t noted that this has adversely affected the sound, so I continued listening as is. The right cable seemed loose; the 2 pin connector would disconnect frequently, probably from others doing multiple cable changes. I eventually got them to fit tightly, and they behaved better, but still acted up here and there (you expect a well behaved Zombie?!?!).

They are pretty large babies-beautifully made marble-looking face plate, aqua colored on the left, a dark purple on the right, with a black body leading to a tip with 3 sound bores. Despite the large size, I found them very comfortable, allowing me to wear them many hours, and even fall asleep with them in (I love to fall asleep to music, and need to sleep with in ears due to a noisy bed mate…). They isolate sound reasonably well, and don’t look too dorky for outdoor use despite their size. They do have the most obvious case of driver flex I’ve noted so far, but pulling at my ear lobe and other parts of my pinna to release seal generally relieved this, so it wasn’t a major issue.

I tried it with my various DAP’s, which consist of iBasso DX90, Pono, and a Pioneer XDP-300r. I did like it with a balanced Pono (have cables and adaptors to do this with), but it was a pain to make cable changes, and the sensitivity was such that the lowest volume setting was quite loud, leaving little room to adjust. I don’t really love the iBasso, and didn’t think the Pioneer was quite doing it justice either, and found my old ALO National amp (don’t generally like bricks as a source, but I sacrificed the convenience for you, dear reader), which, when paired with the Pioneer in line-out, paired nicely with the Zombie. I also listened with my HTC 10 cellphone, which drove it well, generally needing the volume set at 40% of maximum, and streaming music from my favorite radio station, WFMU.org.

So, let’s talk about the sound, shall we?…