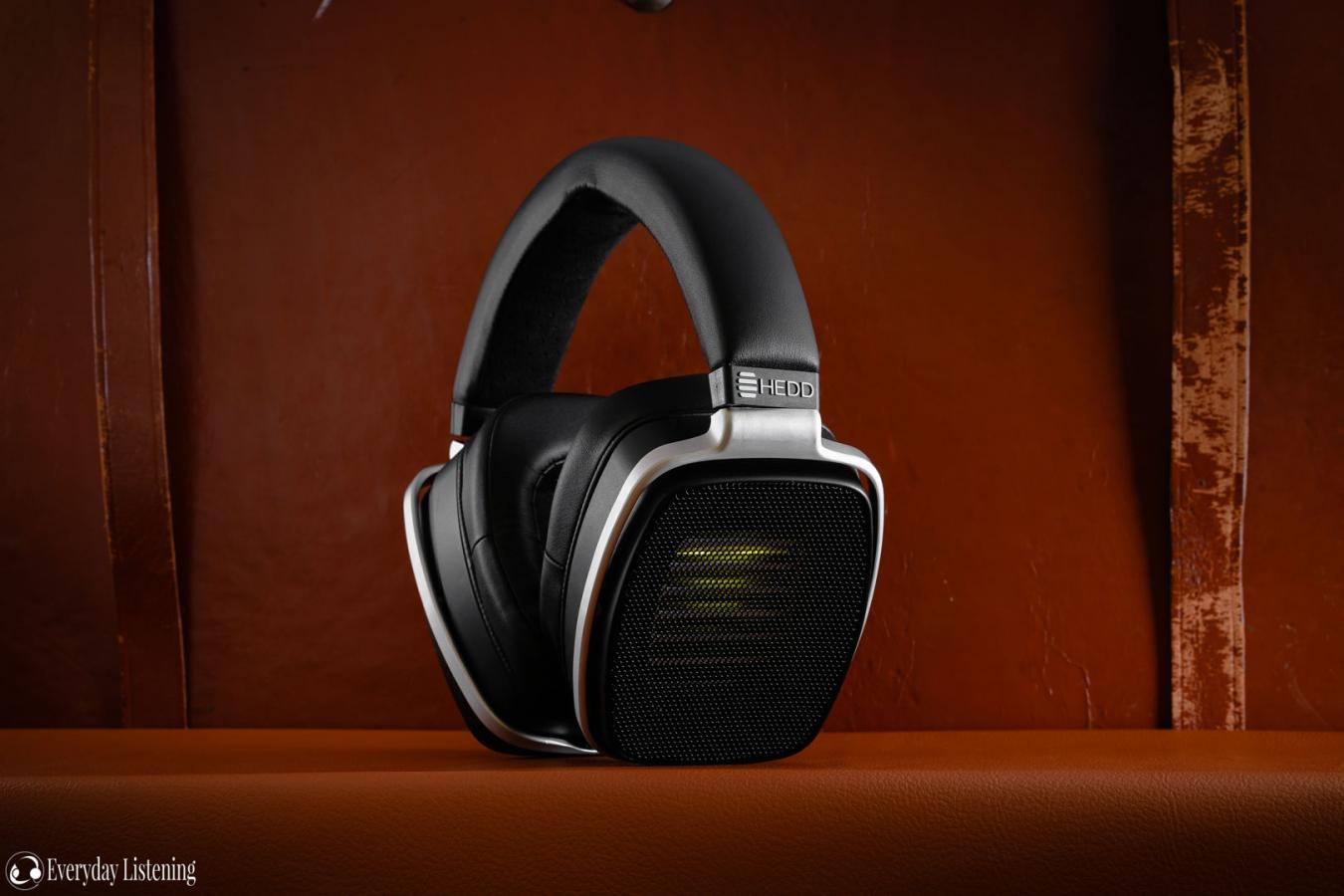 I will take a departure from my usual structure and adopt a more freeform stance here as I feel it is more representative of the HEDDphone’s position in the current market. Currently, on hand, I have 2 direct and esteemed competitors, the Fostex TH909 ($1799) and the Focal Clear ($1499).

Upon trying out each headphone, the Focals and Fostex’s strike as much more traditional in terms of usability. They are both smaller, the Fostex especially is much lighter and lower-profile than the HEDD. Over time, these models wear less on the top of the head and offer sound, all-day comfort in my testing, the Fostex especially. The Alcantara lined Clear is also especially breathable and best for hot days while the HEDDphone and more semi-open Fostex came across as slightly stuffier especially with their less breathable pleather pads. None fold for storage, but even amongst full-size headphones, the HEDDphone is noticeably larger than the competition.

All headphones also target some form of balance with regards to their sound tuning, the TH909 a looser definition, being the most coloured and engaging. In turn, all pose some value to a variety of different consumers. The Clear is objectively the most balanced and will likely have the most widespread appeal in terms of its raw sound signature, it is very easy to like and I also do not find it boring in the slightest, albeit it is the least engaging of the three. The TH909 is the most engaging of the bunch with the biggest, deepest bass and subjectively the most natural tonality. Meanwhile, the HEDDphone is noticeably more resolving than either with the sharpest, most holographic and most layered presentation.

I love the low-end on the TH909, taking inspiration from the bombastic closed-back TH900, it introduces a more balanced expression whilst upholding sensational sub-bass drive and dynamics. It is has the most bass, sub-bass especially, in addition to the best extension and pressure forming a fun and immensely engaging listen. The TH909 has the most physical bass and its quality is superb too, not the highest separation but great texture through the mid-bass and not an ounce of smear or bloat in so doing; this is a great choice for electronic, pop and those that love good bass without overwhelming quantity. The Clear is probably the least involving here though this isn’t a bad thing for those wanting a more linear and natural presentation.

The tuning is lightly warm leaning with a lick of mid and sub-bass emphasis. The voicing and note presentation are the most accurate and bass is well-controlled to boot, about on par with the TH909 with slightly higher separation on account of its more balanced tuning. The HEDDphone’s low end does not deviate too far from the balanced and natural tuning of the Clear but introduces a slightly more robust note structure with a bit more sub-bass bias. It has a stronger, tighter slam and also higher note definition than the Focal, delivering the best separation and timing of the bunch. Again, I would not consider the Clear to be a bad performer, it is simply surrounded by the exceptional.

The midrange is where these models noticeably diverge, the TH909 once again stands out with the most colouration, albeit not to the extent that it sounds off-timbre in any way. Indeed, the TH909 is very naturally voiced and its vocals are lavished with a beautiful light warm tone, inviting clarity and delicate but never sibilant articulation. It is slightly laid-back but without an iota of veil or congestion. It has high coherence with the uptick of warmth and body from the bass balancing out a subtle lift in the upper-midrange and treble. The Clear is pretty darn neutral here according to the headphone Harman-curve but, like most, I personally find the tuning a touch bright-leaning with lifted clarity in exchange for slightly diminished vocal size that I am not a fan of.

Vocals are the best balanced with instruments on the Clear and its positioning is the most accurate that said. The light warmth from the bass imbues a hint of colouration that makes the Clear pleasant and inviting despite its focus on balance and accuracy otherwise. The HEDDphone again provides a slightly more powerful voicing than the Clear with greater vocal body and noticeably smoother articulation. It has the highest definition and separation, being the most revealing of the bunch despite also being the smoothest. The HEDDphone has the most forward and largest vocals but achieves similar coherence to the TH909, putting it above the Clear in this regard.

It’s the high-end where the HEDD really steals the show. Both the Clear and TH909 implement similar voicings, with mild 6k emphasis that brings details to the fore and enhances treble clarity. The HEDDphone rather has a dip here, so it is a much smoother headphone and its detail presentation isn’t as forward as the competitors either. And yet, it easily has the best detail retrieval and resolution of the bunch, its treble has the highest separation, the most sparkle and the cleanest transient response. The Clear follows up with a slightly sharper note attack, it has more crunch and bite to cymbals and percussion in general. The same goes for the Fostex, it sounds the most aggressive and forward here, but it also slightly warmer and more organic so I didn’t find it to lack texture.

The Clear has the best timbre subjectively, with more instrument body and texture than either competitor, the TH909 is a little splashy but follows up with the darkest background for higher contrast and layering. The HEDD is the thinnest of the bunch, it sounds more atmospheric with its top-octave emphasis but isn’t intense since its presentation is smooth over sharp. The Clear and HEDD both offer more air than the Fostex with slightly more open tuning, the HEDD especially has the most headroom of the bunch. The differences can be stark when switching between them due to the inverted 6k tuning that can either make the HEDD sound over-smooth or the Clear and TH909 over-emphasised, I would highly recommend trying them out as treble seems to be most subject to personal preference, especially the 6k region.

The soundstage is interesting, again the HEDD having some unique qualities that differentiate it from the competition. The Clears have the widest stage and it’s fairly well-rounded with good depth too. The TH909 has the least width but also a bit more depth than the Clear and it has slightly better layering than the Clear too with more contrast between foreground and background. The HEDDphone’s stage width is between the two but closer to the more spacious Clear, however, it has by far the most depth. The HEDD also has the sharpest imaging, the best layering and the best separation, its ability to position and isolate every minutiae is its raison d’etre.

The Heddphone is surely a romantic product as the first of its kind, yet it also harkens back to a legacy of acoustic design in the studio monitor space. This is a highly ambitious product from Klaus and Dr. Frederik whose meticulous realisation equally rewards in real-world performance as in theoretical design. Furthermore, despite being a premium product, relative to the modern high-end headphone market, the price is par for course while the performance is far from it. The HEDDphone is a technical achievement and in this sense, can be said to represent a strong value proposition. It’s head to toe extension dwarfs the majority, crafting a highly involving, immersive and simply impressive presentation. This is executed without much weirdness in the tuning, it isn’t perfectly flat nor as traditionally coloured as competitors like the Focal Clear and even the TH909. However, so too is its note presentation unique and I find the smooth and full presentation almost a necessity to rein in its quick and sharp note delivery. The experience does come with some caveats, namely the large and heavy housings that will not find so many fans. Similarly, those wanting the deepest, most dynamic bass and a rich, analogue or organic timbre will not find it here. If you don’t mind the weight, this is surely a case of high-end pricing, summit-fi performance. For that, I applaud HEDD for perfectly balancing long-term listenability and huge resolving power in their modern masterpiece.

The HEDDphone is available from HEDD Audio (International) for 1699 EUR at the time of writing. I am not affiliated with HEDD and receive no earnings from purchases through this link.

Courtney Barnett – Tell Me How You Really Feel

Kehlani – While We Wait

Jim Croce – You Don’t Mess Around With Jim

The Cranberries – No Need To Argue