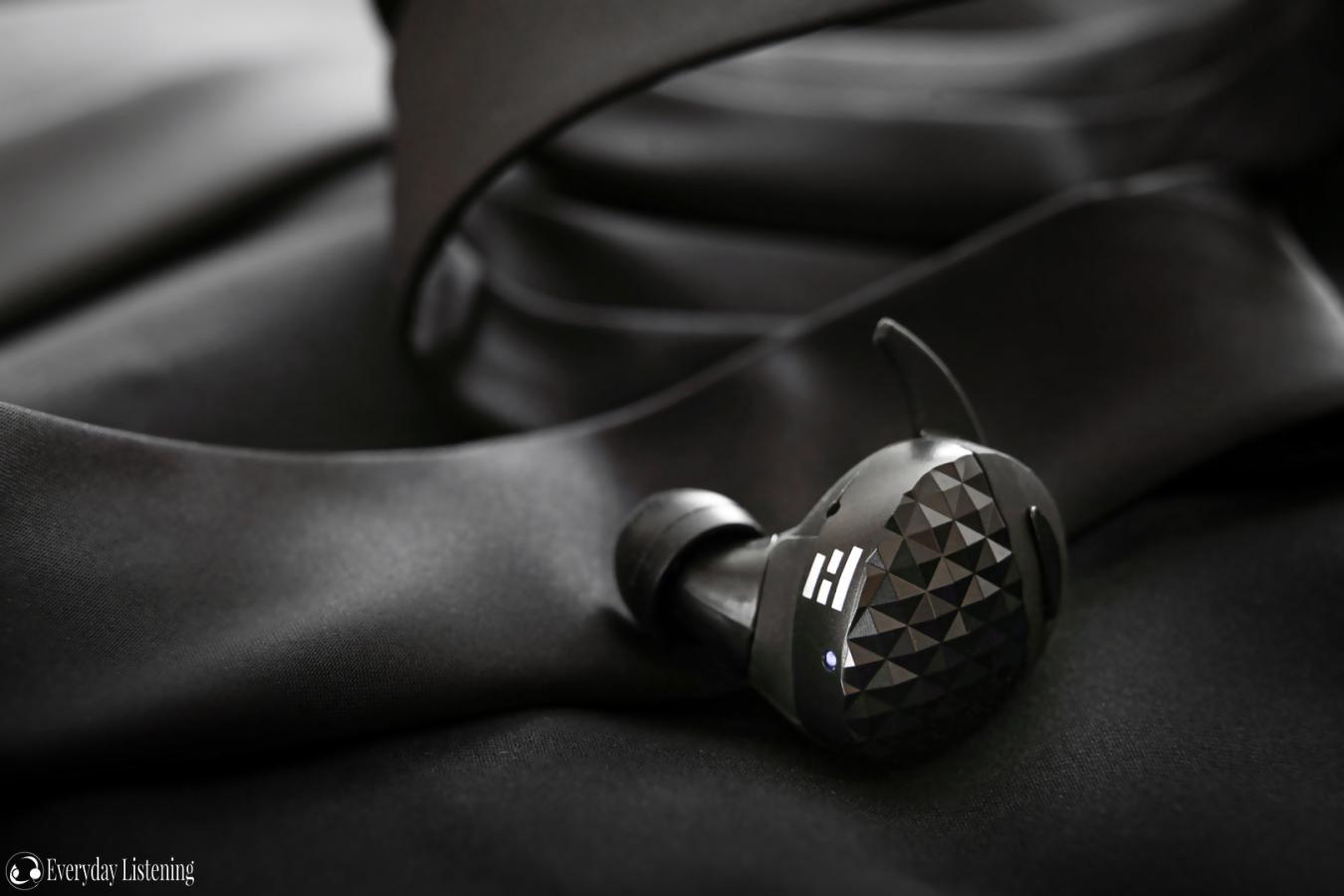 The TWS 5.0 is one of the most V-shaped earphones I’ve heard in a long time and, as a result, it will alienate some listeners. What is does offer is immense, physical sub-bass, huge mid-bass and a sharp drop off into the upper-bass and lower-midrange to provide some separation and avoid veil and bloom. Mids are clearly recessed but vocals have greatly enhanced clarity due to an aggressive rise through the upper-midrange that ensures they aren’t overshadowed. Meanwhile, highs are very energetic, raised almost to the same level as bass. This is observed in the form of twin lower and middle-treble peaks that bring details to the fore and enhance headroom. Though not balanced or natural in the slightest, the 5.0 exemplifies a bombastic, consumer V for those chasing an exhilarating audio experience.

If you want bass, the 5.0 should be a high priority. The level of emphasis and sub-bass extension here is immense and will certainly challenge the notion that the microamps in TWS in-ears are incapable of driving big bass. It has very substantial emphasis which extends to the mid-bass, delivering enormous notes with huge rumble and slam. Meanwhile, upper-bass is less present to avoid congestion of its sound and continues reduction in emphasis into the lower-midrange. Lows are a bit muddy and boomy, especially on already bassy tracks. Bloat is also present due to the sheer level of quantity. That said, as the mid-bass doesn’t steal too much attention, the sound isn’t too humped or woolly.

I was quite pleased with the driver quality on the 5.0 which helps to rein in their enormous emphasis. In fact, control is very good for a TWS earphone which helps to retain detail; and it’s clear this isn’t a low-cost implementation as with some cheaper models that can sound rather one-note and lacking definition. Though not exemplary, the 5.0 does have modest levels of detail retrieval and definition. Don’t expect quick decay and a highly textured sound, however, fine details are smeared by bloat and timbre is not accurate in the slightest. What the listener does receive is huge quantity with sub-woofer like slam while retaining nicely defined mid-bass notes. This is a bass lover’s earphone through and through.

In lieu of the bass, Helm had quite a challenge tuning the midrange to sound natural in any way. And yet, they have mostly succeeded. The midrange in its entirety is recessed and vocals are reasonably laid-back, but not as much as one may think given their level of bass. Male vocals on most tracks are rather full-bodied with a warm tone that permeates from the bass, though never did they become muffled or muddy as a result of their aggressive upper-bass/lower-midrange trough. The 5.0 then begins a steep climb to upper-midrange peak which imbues great clarity and enhances intelligibility and definition. As such, female vocals almost always take precedence within their presentation and vocals nonetheless, achieve sound cleanliness and openness.

Such a tuning may theoretically fatigue, however, the upper-midrange isn’t especially forward by comparison to the bass and the lack of lower-midrange is well counterbalanced by enhanced low-end body. The lower-treble has also been brought forward, creating that aggressive V and lifting the tone out of warmth in the higher ranges. This further aids vocal extension and clarity to some degree while a small 4KHz dip mitigates the effects of over-articulation and peakiness to an acceptable level by enhancing density and smoothness. Like the low-end, timbre isn’t accurate, however, vocals are very clear and mostly clean without becoming too raspy or thinned out either. Given the level of emphasis in the bass and treble, Helm has achieved a respectable balancing act with the 5.0’s midrange.

Highs are quite enjoyable too, clear and not overly sharp which will be sure to please listeners. Lower-treble has a moderate peak, enhancing foreground detail presence and crispness. There is a sound level of detail retrieval and energy, providing nice contrast to its warmer and fuller low-end. As the treble emphasis isn’t to the same extent as bass, the earphones don’t sound peaky or bright, treble is rather brought to similar prevalence in the sound and instrument clarity is increased. Timbre isn’t ideal as the isolated 6KHz emphasis creates rather thin instrumentation. However, as the middle-treble isn’t overly present, treble isn’t brittle or splashy.

Extension is clearly limited, there is no apparent micro-detail or soundstage expansion as you would expect from a wired model with prevalent roll off through the middle-treble. A small bump around 8KHz redeems some air and headroom though the background remains dark in general. This contributes to a semblance of cleanliness, however, as there is no detail within this region, the Helm doesn’t produce a wide and layered presentation. Rather, there is good detail retrieval and clarity within the highs combined with enough energy to lift the clarity and tone of the midrange. It does so all the while avoiding fatigue and over-brightness.

The soundstage is average, remaining within the head in terms of both width and depth. Separation is just modest due to the earphone’s pervasive warmth but there is ample separation between the three core frequency bands, leaving vocals, strings and bass clearly discernible. Imaging is sound, vocals have a strong centre image and instruments reside across the sides. There is some layering, especially between vocals and instruments, however, there isn’t much going on in the background leaving the presentation fairly two-dimensional. Directional cues are sharp, however.

Lypertek TEVI ($90): The TEVI provides a substantially more balanced and linear sound and a more technical high-end. The Helm has better sub-bass extension and a lot more bass quantity. Meanwhile, the TEVI’s low-end is neutral and highly controlled, giving the TEVI a lot more detail retrieval at the cost of quantity. The Helm still has good definition but also has hugely more rumble and slam so it will depend on what style of sound you’re looking for. Through the midrange, we observe a similar trend; the Helm being substantially more sculpted, the TEVI, more neutral. The TEVI has less body and also less clarity, but its vocals are more balanced with the rest of its sound.

The TEVI also has a more consistent timbre between tracks where the Helm can sound warmer or thinner depending on mastering due to its sculpted nature. Within the highs, both are crisp and nicely detailed. The Helm has more foreground detail presence at the cost of sounding thinner while the TEVI has more detail retrieval and a little more extension into the middle-treble. As such, it has a wider stage and its imaging is more immersive though the Helm has more treble clarity and attack suiting those wanting more engagement.

Momentum TWS ($200): The Momentum TWS offers a similar V-shaped sound, but is considerably warmer and fuller. The Helm has better sub-bass extension and considerably more emphasis throughout its entire low-end, delivering more slam and rumble. Meanwhile, the Momentum has more definition and detail retrieval. The Momentum has a warmer tone as its upper-bass and lower-midrange are more present in its sound, though overall it is more linear sounding more accurate in terms of body and timbre. Conversely, the Helm implements large upper-midrange emphasis to produce a clearer and more vivid sound.

The Helm has large detail presence and crispness, it sounds a bit sharp and is clearly bright but also well-detailed and engaging. The Momentum is more composed and has more separation. Neither have exceptional treble extension, the Helm has a darker background and less headroom, with sharper roll-off through the middle treble. The Momentum has a more nuanced soundstage with more accurate imaging while the Helm is more simplistic in its presentation with small but clear central vocals and huge instruments to the side with little layering.

Looking through these impressions and comparisons, it’s clear that these earphones won’t appeal to those valuing balance and transparency. However, they seem to me, a well-executed bass-focussed sound with very impressive driver quality for a more affordable TWS earphone. Sure, its sound may be bombastic. However, such a sound in culmination with large, physical buttons, excellent noise isolation and fit stability, water-resistance and longer 6-8hr battery-life all make this is an excellent workout bud. They also work just as well for commute, where their fullness effectively combats the drone of suburbia. Is this a new champion of TWS? I’m not convinced, but a not-so-guilty pleasure bass-head earphone without the wires, I haven’t seen it done much better than this. The Helm Audio 5.0 TWS isn’t apologetic about its intentions, that is, to deliver head pounding sub-bass and a high-energy top-end. It isn’t nuanced or subtle but brash, bold and engaging. Audiophiles, proceed with caution!