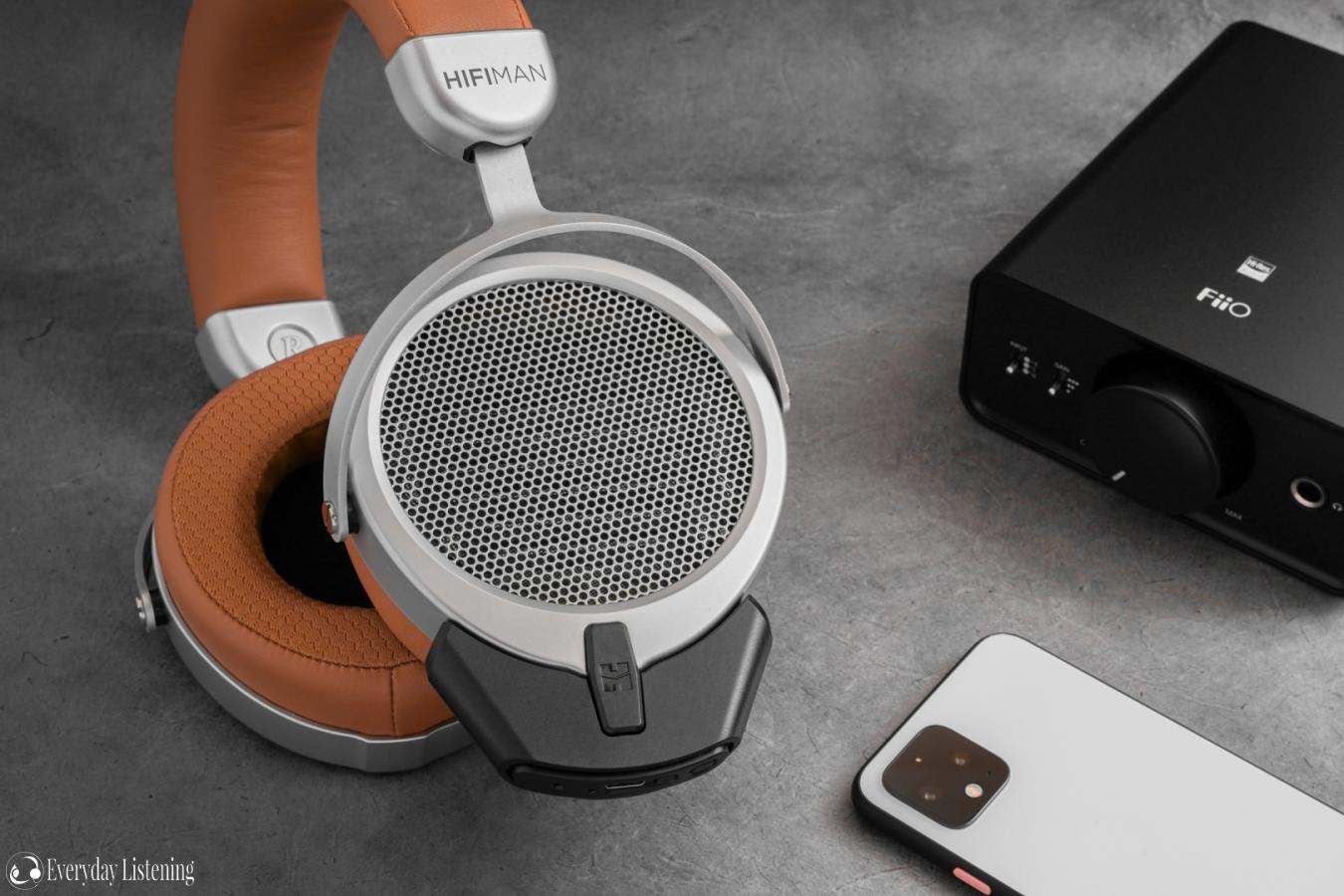 The DEVA’s versatility makes it an easy recommendation, best suiting those looking for wireless convenience for their TV or PC setup without compromising musical performance.

Hifiman is a staple in the audiophile industry, renowned for their high-performance yet cost-effective headphones. Their planar headphones are perhaps most lauded and are wide and frequent recommendations by both users and critics. Having experienced many of their old and new models, I would say that Hifiman’s headphones, in general, carry quite balanced and appealing tonalities. This becomes most exciting when filtered down to a lower asking price and the new DEVA usurps the Sundara as the cheapest headphone in their line-up. It also brings a slightly revised design alongside wireless connectivity from an included Bluetooth module. The DEVA promises the Hifiman sound beloved by so many at a lower price with the added convenience of dual wired/wireless input.

The DEVA is available for $299 USD or $219 without the Bluemini module. You can read more about the DEVA and treat yourself to a pair on Hifiman’s website here.

Battery Life: 7-10hrs (depending on volume and codec)

The DEVA much like the Ananda revision released last year offers wireless connectivity. However, unlike that model, the headphone itself doesn’t contain any additional circuitry, rather a separate module does the heavy lifting. This is to be taken as a bonus as it permits a completely unadulterated wired experience should users want to extract maximum performance from the headphones with a larger dedicated source. The module itself is also very promising with huge codec support including LDAC, Apt-X HD, Apt-X and AAC. Apt-X low latency is the only notable omission, though source compatibility is limited on this one and regular Apt-X has low enough latency to service videos and movies.

Hifiman’s headphones all employ planar magnetic drivers (PMD) that offer a cleaner transient response than traditional dynamic drivers. Their large surface area combined with more uniform force distribution permits a more physical bass response and sharper imaging. PMD’s also offer lower distortion as they are less susceptible to modal break up. Hifiman take this one step further with NsD that was first introduced with the Sundara if memory serves me correctly. It comprises of a “supernano” diaphragm that is 80% thinner than prior designs equating to an even sharper transient response and increased detail retrieval. Though I am unable to confirm whether this is the same driver as the Sundara, many similarities are to be observed. Further comparisons will follow my sound analysis.

The DEVA has a similar unboxing to the Sundara which is quite rewarding for the consumer. An internal tray slides out from the outer sleeve showcasing the headphones in a satin fabric inlet. There’s a cutout containing the Bluemini module, a 1/4″ adapter, 3.5mm audio cable alongside a type-C USB cable. Overall, a simple yet effective setup for the headphone’s intended uses.

The DEVA resembles its closest sibling, the Sundara, most while introducing a distinctly different aesthetic with its revised headband design and colour scheme. The colour choice is clean and very appealing to my eyes, a tasteful tanned leather combined with metal-esque satin silver frame. That said, though appearing premium, the construction has obviously been subject to some cost-cutting, being entirely plastic in nature. It’s also a bulkier headphone overall, the Sundara feeling noticeably more premium with its sleeker metal build in the hand. Nonetheless, this does not feel like an explicitly poorly built headphone, with convincing solidity and even joins and finish across all components forming a coherent and well-realised product.

The headband design is also markedly different, a thick and heavily padded unit as opposed to the suspension band on Hifiman’s other models. This is in order to accommodate a single-entry input for the Bluemini module, necessitating wiring running from left to right. In wearing, it provides a relatively low-profile fit, conforming well to my head shape, though those with wider temples may have issue as a result. Still, the consensus appears to suggest this is a comfortable headphone for many. Though heavily padded, I still found the suspension headband on the Sundara to spread the weight of the headphones more evenly which will be something to consider if you plan on using the headphones all day long.

Both the included Type-C and audio cables are pleasant braided units and a nice step up from previous Hifiman accessories. That said, they are still very stiff with a lot of memory, meaning they retain kinks and bends in addition to carrying more microphonic noise than usual. Still, the cable otherwise demonstrates good construction, the fabric jacket is nice as are the metal terminations albeit lacking strain relief of any kind. A nice QOL feature are the split colour jacks, silver for the source and black for the headphone side which makes orientation a bit easier. Altogether, it’s evident that this is a cheaper headphone than the Sundara and Ananda, but it is not a cheap headphone in isolation; and it’s good to see that Hifiman are starting to set higher standards with their build quality.

Despite employing a plastic construction, the DEVA remains quite hefty at 360g or 385g with the Bluemini module – making it around 15g heavier than the Sundara. I found that they would still produce a mild hotspot at the top of my head after a few hours while the Sundara would remain comfortable all day long. Meanwhile, we observe a similar earpad construction; cloth on the inner surface and pleather on the internal and external faces. The lush memory foam padding of the Sundara has been replaced with simple sponge here, however, as the hangers now articulate, I still found the DEVA to conform well to my head shape. Still, the DEVA simply doesn’t feel as planted on the head as the Sundara so fit stability is reduced. Though remains sufficient for stationary listening if easily tipped when out and about. In isolation, the DEVA is a comfortable headphone, but it is a noticeably less premium experience compared side by side with the Sundara.

I’m actually quite enthusiastic about the Bluemini, it isn’t compact but is far from as large as it could’ve been. The case is a simple matte plastic but with convincing texture and finish. It feels light but purposefully so, likely to minimise asymmetry of the headphone’s weight when installed. You do notice the additional 15g but it wasn’t even something that caused discomfort nor required me to stop using them. It interfaces via a 4-prong TRRS 3.5mm plug and there’s an indent on the face of the headphone that provides a guiding groove to ensure the connection is stable and reliable. The ability to remove the adapter is a generational step up from the Ananda BT as it permits unimpeded wired use too. The Bluemini is a streamlined wireless experience but also a non-frills one so don’t expect great app support, eQ, etc.

The bottom contains the main controls, one power/MFB and one for pairing in addition to a Type-C connector that both enables charging of the device in addition to firmware updates and USB-DAC functionality. It also houses an LED that denotes connection and battery status. My main qualm is with this indicator LED, it’s very bright and flashes constantly when connected, I’m hoping a firmware update can address this in future. The adapter has very wide BT codec support (LDAC, Apt-X HD, Apt-X, AAC and SBC), essentially as good as you could ask for in 2020. Pairing is intuitive and it reconnects to previously paired devices in just a few seconds. Wireless range is also good but not the best I’ve experienced.

I was able to traverse within the same room while maintaining a rock-solid connection, but leaving the room quickly saw the sound become intermittent. They do reconnect quickly, but again, work best with line of sight to the transmitter as with all wireless devices. Those with a home-theatre setup or larger living room may want to position the transmitter in front of the screen while those at any size PC setup will likely have no issues. Latency was also perfectly usable, with just very slight lip sync when watching videos, one of the lesser affected BT implementations I’ve come across likely due to the wide codex support. I don’t personally see a lot of users buying these for commute but know there is a market for that. Of course, there is no passive isolation, but the connection was strong enough not to drop on the train or in the CBD where there’s substantially more interference than home environments.

When connected over BT, Hifiman quote 7-10hrs of runtime depending on volume, and I was receiving a good 8.5hrs consistently on 25% volume and found maximum volume surprisingly generous. In USB-DAC mode, the runtime curiously drops to a quoted 4-5hrs due to the higher maximum volume. Considering the sensitivity of these headphones, necessitating a dedicated amplifier when wired, these are both very good results and very usable for the headphone’s intended purposes – think, a few hours of wireless use with a TV setup or PC. I’ll be detailing my sound impressions of the module below.