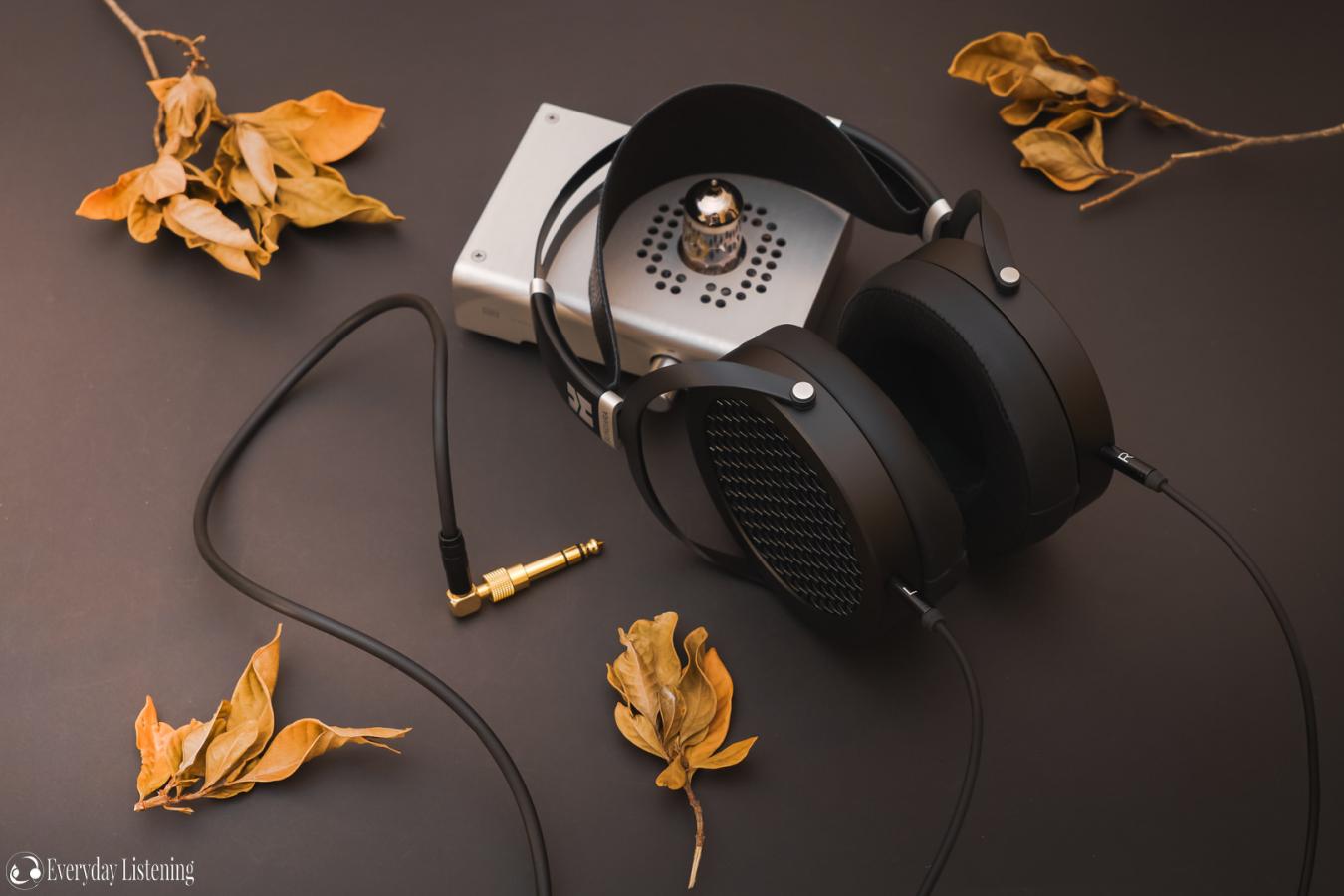 The Sundara is a natural, slightly laid-back but overall well-balanced headphone, delivering one of the most natural sounds around its price and besting plenty above. It is, however, U-shaped, providing a slightly more engaging sound with enhanced bass fullness and air up top. It tends towards a relaxed listen while engaging with a slightly more impactful low-end.

The low-end extends nicely, missing a touch of sub-bass impact at the very bottom but delivering plenty of slam and well-defined rumble nonetheless. Mid-bass is slightly enhanced, introducing a touch of warmth into its presentation. Meanwhile, upper-bass is delightfully linear and neutral, avoiding over-warming and saturation while maintaining a natural sense of body. Driver control is great, each note has a tight impact and high definition. Despite this, notes have more natural decay producing a smoother texture.

As such, don’t expect a hyper-defined listen but one that is smooth and a little more on the diffuse side with plenty of quantity and a euphonic tone that’s immensely inviting. They retrieve plenty of bass detail even if bass isn’t of the agile, neutral kind. They aren’t especially hard-hitting at the very bottom nor are they hyper-defined through the mid-bass, but the Sundara is most certainly musical and not sloppy or muddy in the slightest. This is a presentation I found myself very much enjoying and I’m sure many listeners will be inclined to agree.

A highlight of the Sundara is its lightly warm vocals and natural instrument representation, mids are well done indeed. Lower-mids extend linearly from the upper-bass with a touch of warmth tinting the vocal range. This makes them a touch fuller yet also very complete. Timbre is excellent as the emphasized high-end serves to lift its tone and clarity a touch without over-articulation. Sibilance is a non-issue due to a lack of lower-treble peak. The centre midrange is neutral which by comparison to the bass and treble, puts vocals slightly behind instruments.

However, they are hardly recessed or over-shadowed and they are very well-separated due to well-considered transitions between the three core frequency bands. The upper-midrange is a touch-enhanced which enhances vocal clarity and extension. The Sundara keeps a consistent character through its midrange as with its bass, maintaining a very natural presentation if not a hyper-defined one. For those valuing vocal fidelity and balance with instruments, the linearity of the Sundara is not easy to come by, especially around its asking price.

Most definitely, we’ve seen an evolution of Chi-Fi tuning in recent years, moving away from sharp lower-treble peaks and more towards higher emphasis with a smoother foreground. Personally, I am a fan of this transition and the Sundara represents everything great about this tuning decision. With a slightly laid-back lower-treble, the headphones sound smooth and well-bodied. Detail retrieval is excellent without nearly coming across as rambunctious. Sibilance is well-controlled and the midrange is smooth and refined as a result. Meanwhile, a gradual middle treble emphasis ensures that details remain well-present.

Increasing the middle-treble presence of the Sundara complements an impression of ample headroom when utilised in culmination with its well-performing extension. While upper-treble isn’t especially present, and sparkle isn’t abundant as a result, extension is on the upper echelon for headphones around this price. The result is an open soundscape sans fatiguing brightness and no shortage of minute detail throughout. Yet, as middle-treble is brought forward, the Sundara does not provide the most layered presentation.

With respectable treble extension combined with an open back design, the Sundara provides a moderately spacious soundstage that is more naturally expansive than closed models. It is also on the larger side within its price range, expanding noticeably beyond the head in all axis. Due to its high level of linearity from upper-bass through to lower-treble, the stage is well-rounded and, as a result, imaging is very accurate which is one of the Sundara’s strongest assets. That said, listeners should not expect the clear foreground/background distinction provided by headphones with a darker middle treble. Nonetheless, the headphone provides a well-separated sound overall on behalf of its balanced tuning and quicker decay. This headphone delivers an involving yet well-metered listen.

The Sundara has a low 37ohm impedance and a reasonable 94dB sensitivity. As such, it requires more voltage than most to achieve the same listening volume though it remains very listenable from portable devices, especially when compared to higher impedance full-size headphones. That said, though smartphones such as my Google Pixel 3 deliver adequate volume, there is a notable dynamic flatness to its sound in addition to a loss of soundstage expansion. Switching to a midrange DAP such as the Shanling M2X provides an immediately more nuanced listen that was perceptibly more open, controlled and defined. And plugging into my JDS Labs Element provided a grander sound yet with noticeably enhanced bass control and slam. The Sundara is fairly easy to drive for a planar, though it sings best from a low output impedance source with a high current output.

Sennheiser HD6XX ($200): The HD6XX is a more energetic headphone with greater clarity. The Sundara offers a deeper sub-bass extension in addition to more sub-bass emphasis. Both have a lightly warm mid-bass, the Sennheiser strikes as the warmer headphone with emphasis extending to the upper-bass. The Sundara has more bass control and definition, it is clearly more detailed. Meanwhile, the HD6XX has the more prominent vocal range in addition to a touch more clarity on behalf of greater upper-midrange emphasis. The Sennheiser has a touch more midrange warmth too, a result of its greater upper-bass emphasis.

Both headphones sound natural, the Sundara lying slightly more on the laid-back side, the HD6XX on the forward side. Treble is more forward on the HD6XX, especially the lower treble, delivering more crispness and crunch. Meanwhile, the Sundara is slightly smoother and has more body. It has more air and better extension. Though neither headphones have heaps going on in the highest octaves, the Sundara is clearly more extended and open. This benefits the soundstage, the Sundara offering a substantially larger sound, especially in culmination with its more extended bass, it sounds more voluminous in general.

Advanced Sound Alpha ($499): The Alpha has a weightier sound and, though it is balanced, it is less linear in general. Sub-bass extends deeper on the Alpha and it has noticeably more emphasis here. Both have similar light mid-bass emphasis and warmth combined with a fairly linear upper-bass. The Sundara is more controlled and defined within the low-end, it is slightly quicker and more detailed though at the cost of depth and slam. Through the midrange, both headphones diverge a little more, the Alpha most noticeably with its prominent vocal range. As such, it sounds more forward and vocal clarity is enhanced. That said, the Sundara comes across as more balanced and more natural with more consistent body and a smoother articulation.

Up top, both return to a more similar tuning, with a smooth lower-treble set to a more prominent middle treble. The Alpha, however, is more aggressively tuned with a sharper 8KHz peak whereas the Sundara is more gradual in its climb to emphasis and is emphasized to a lesser degree. As a result, it is less fatiguing over time and also not as sharp. That said, both headphones are well-detailed and have similar top-end extension. Both headphones have similarly sized soundstages, but the Sundara sounds a little more separated on account of its more laid-back mids and background. It also sounds more layered and separated due to its greater linearity and less outstanding peaks.

Hifiman are no longer the best-kept secret of the audio world with Massdrop collaborations and international recommendation abundant. However, they have not utilized their popularity to over-inflate pricing, instead, refining already lauded sonics and appending frequent build quality complaints. The Sundara is, in turn, one of the most complete value-orientated open-back planars on the market; its comfortable fit and durable construction augmenting its balanced tuning and excellent dynamics. Though bass lovers may want to look elsewhere, the Sundara provides a natural, tonally excellent presentation and one of the most accurate midrange timbres in its price range. Buyers looking for a well-rounded open-back headphone with a u-shaped signature would do well to choose the Sundara.